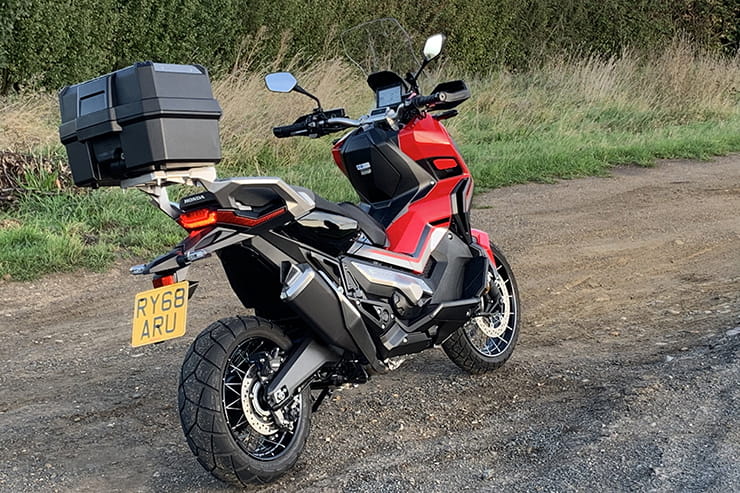 Let’s play fantasy bike buying. Just supposing you were the kind of wide-eyed optimist that decided living in the place you’d always wanted was worth the sacrifice of a 150-mile commute (each way) to the office, what bike would you choose?

I may be that idiot and did recently spend a whole lot of time working out what the best bike might be for that trip. It didn’t take long to realise I’d need something comfy, with a big fairing, but not so big as to get wedged between trucks when filtering in night time rush hours (have you ever noticed how traffic squeezes itself together towards the white lines when darkness comes, taking a foot of our ‘motorcycle lane’ away?

Clearly my new bike has to be able to cruise easily at motorway speeds with a little in reserve for something I can’t quite justify right now, but I’d also prefer it to do at least 60mpg, not wear out tyres too quickly and be cheap to run. Some kind of luggage capacity for a laptop, change of clothes and a toothbrush too (because some days the weather/fatigue prevents my ageing bones from doing the return leg), shaft or belt drive, (or an enclosed chain), a light clutch and easy gear change and build quality that will see out the other side of several winters regardless of the mileage.

All three big tourers fit the bill on all counts (apart from mpg and maybe the width when filtering). They’ll all do 50mpg and a half-decent example showing less than 50,000 miles can be bought for £5k…ish. 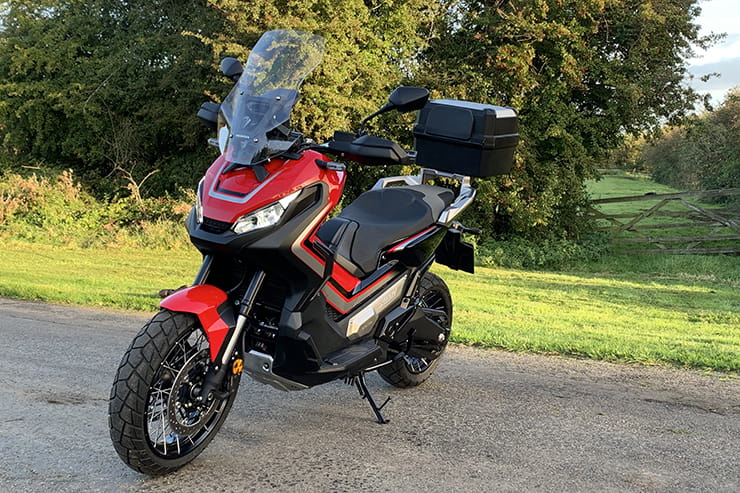 Comfy, capable and cool too. Is Honda’s 70mpg X-ADV the perfect commuter?

In another world my own 40,000 mile Fazer 1000 does much of that, with half the width, 70kg less mass and only owes me £1650, but doesn’t have shaft drive or luggage. Don’t ask why – and I know half of motorcycling hates this bike while everyone who bought one loves it – but I kept thinking about Honda’s NC750, which costs almost the same when new as a ten year old BMW tourer. And then I remembered the funky X-ADV scootercycle, which is essentially an NC750 with better suspension, build quality that only Honda do, 75mpg however you ride it, a big screen, reasonable weather protection and the kind of ‘what the heck’ personality that makes me chuckle.

Plus, the X-ADV is a cool example of motorcycle-as-utility and I like that. A brand new functional-but-funky piece of properly built urban loopiness for just, er,…how much? 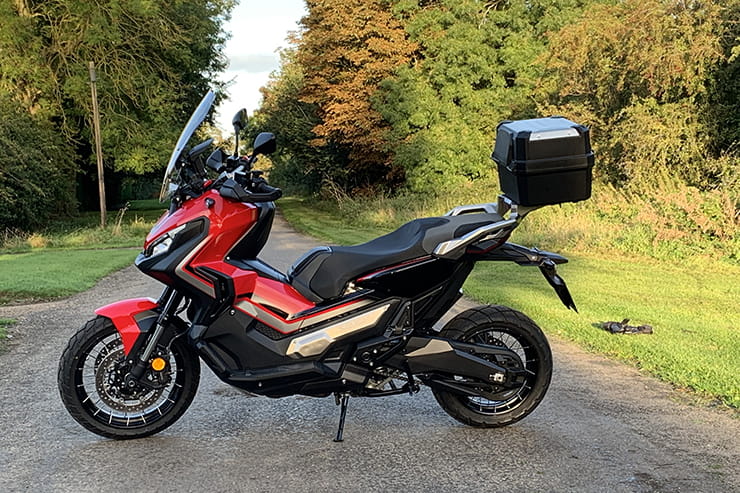 It’s not a scooter, but not entirely a motorcycle either. Scootycle maybe?

The X-ADV’s £10k list price is a lot of cash for a 54bhp NC750 wearing combat trousers. But that’s no more than the top-spec BMW or Yamaha maxi-scooters, a lot less than Yamaha’s ‘don’t-call-me-a-scooter’ Niken and the Honda has a DCT gearbox as standard, which I love. Plus, if you shop around there are pre-registered, zero-mile X-ADVs out there for a lot less than list price

Because it’s a new bike I could borrow one from Honda before making up my mind (and an FJR1300 too, more of which later). So far, it’s working very well some kind of vindication for the idiot who took on Britain’s daftest commute (actually, I used to manage a bloke on a scooter magazine who did a longer trip than mine on a 50 year-old 15bhp Lambretta – that is Britain’s daftest commute).

The X-ADV takes a little getting used to. The riding position is quirky; legs forward, like a ski-lift not a chopper. The handlebars look tall and wide but are low enough that the mirrors high-five the vans when filtering. 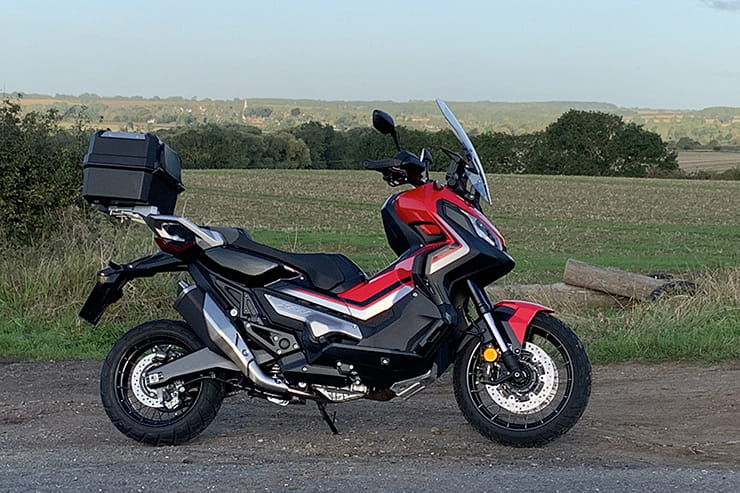 That’s it as far as the niggles go though, once you’ve got used to the position, every trip on the X-ADV is an exercise in relaxing efficiency, stunning economy and madcap passive-aggression. Somehow, you discover it only takes 54bhp to be at the front of every queue.

It’s easy to forget that for many riders getting around on two wheels is a simple matter of utility. Just because the daylight disappears for a few months doesn’t stop motorcycling being the smartest way to get from here to there. Bikes like the Honda make this practical because they just get on with it, while resisting the urge to dissolve at the first sign on salt.

Yes, the headlights could be better (could be much better in fact) and the width of the seat and full-length running boards makes its 820mm seat height feel taller than it is. Our bike has Honda’s heated grips fitted, which don’t so much heat your fingers as prevent them getting too cold (there’s a big difference). Which might sound like a bit of a moan. Niggles would be a better word and they all disappear when, at the end of a biblically-wet three hours in the saddle, I come to the tight, bumpy right hand bend at the top of the hill near my house and glide around it in complete confidence despite the speedo showing a number that starts with a seven.

A couple of weeks on Yamaha’s 144bhp FJR1300 left the Honda feeling a little gutless for the first few miles, but then you get back into the hang of manually changing down gears on the DCT semi-automatic gearbox when you need some extra oomph and settle back into a ride where you flow with the traffic instead of riding the tail lights of the car in front.

What really hammers home the brilliance of the Honda is when you stop to fill up and realise you’ve used a whole gallon less than the FJR1300 to do the same 150-mile journey in pretty much exactly the same time.

If we all bought bikes based on the numbers, then we’d all be riding around on Yamaha Fazer 1000s. In the same way as if we all chose dogs by numbers no one would have the two daft, mis-shaped mutts waiting for me to drip seven counties of rain onto the rug in five minutes time.

Thankfully we have more imagination than that. 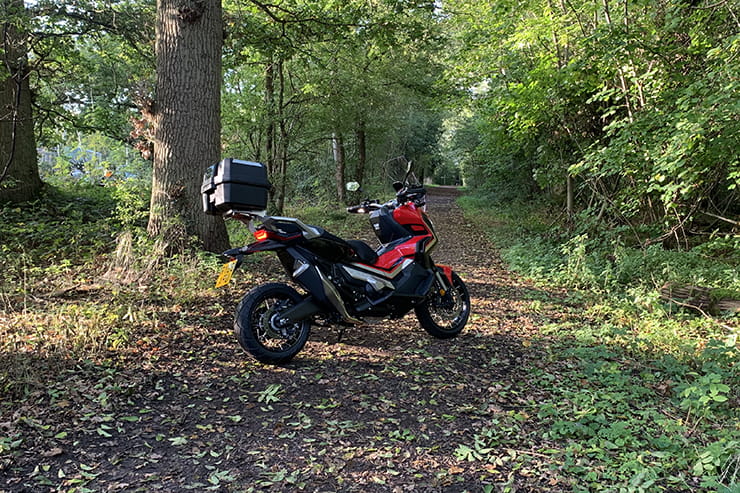