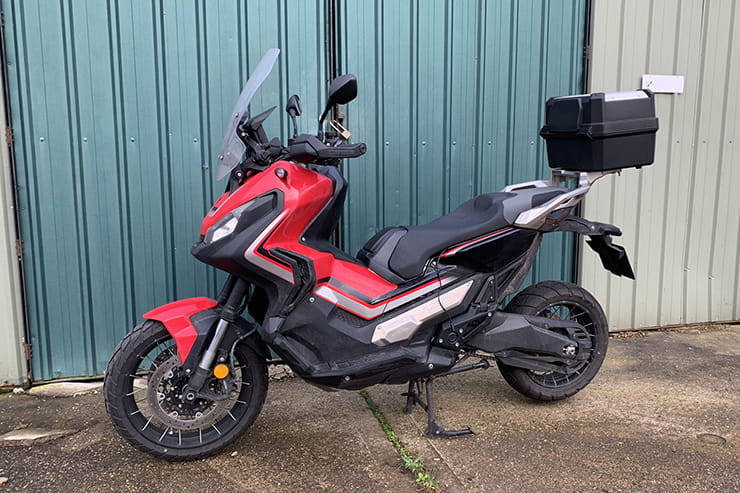 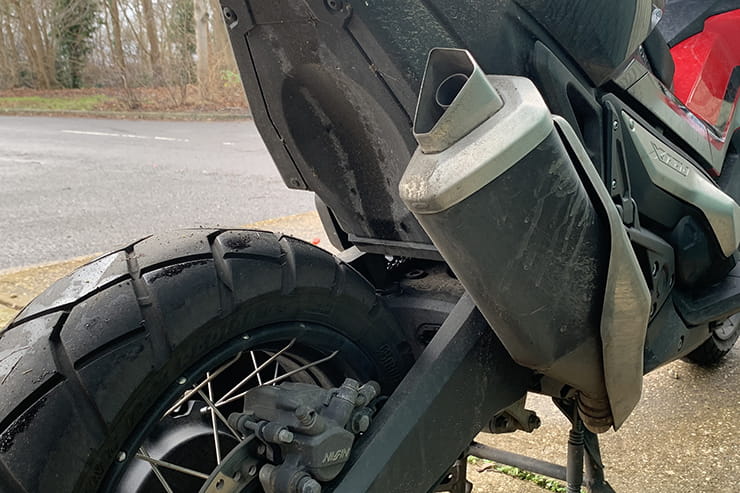 Freezing cold or furious storms, the X-ADV has the measure of winter riding

Storm Brendan in mid-January won’t go down in history as one of the UK’s meteorological landmarks, but it was grim enough when looking at it from Peterborough on a Tuesday afternoon, knowing I had to ride 153 miles south…on a feet-first, 54bhp, 238g scootacycle…at the time it was due to batter us with torrential rain and 55mph gusts.

A little under three hours later the wind and rain, a badly misted visor for the last 60 miles and some horrifically stupid car drivers were already a dull memory as I hit the twistiest, most giggly part of my journey home over the whoops and falls of the South Downs and attacked the turns with the energy and daft enthusiasm of an invincible teenager on his first bike.

Putting the X-ADV away in the garage ten minutes later, I had one of those ‘long-look-back’ moments. I might even have said ‘thank you’. This bizarre machine has really got under my skin in the last few months. 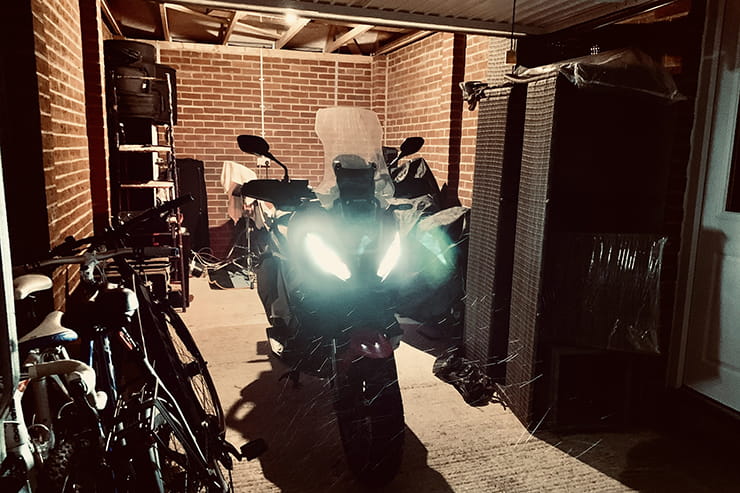 Another 153 miles completed without fuss. Horrendous winter weather made simple.

For one thing it makes you think about other things than engine performance. On this bike, with the DCT gearbox the engine is almost irrelevant. I’ve finally realised that ‘D’ mode in DCT should be re-labelled ‘M’ for motorway because that’s the one place it really makes sense – everywhere else I run it in ‘S’ mode. You twist, you go and that’s it. I know a lot of riders who will stop reading here because for many of us the engine is the beating heart etc (other clichés are available) of a motorcycle. Mostly I’d agree, but if your relationship with a motorcycle is functional and you still want something that looks cool and makes you smile like the rider described above, sometimes a placid, predictable, functional motor is fine (I can’t wait till this goes on social media – the responses are going to be interesting).

This bike is different, it messes with my muscle memory and confuses my subconscious riding skills. The riding position is at the heart of it. It should feel like a big scooter but, being based on Honda’s NC750 motorcycle means the engine is two feet further forward than it would be on a scooter, sitting where the step-thru gap should be. So you sit on a tall-ish, well-padded saddle, with feet forward and hands grabbing flat, wide handlebars. It’s closer to a cruiser position than a maxi-scooter or adventure bike. 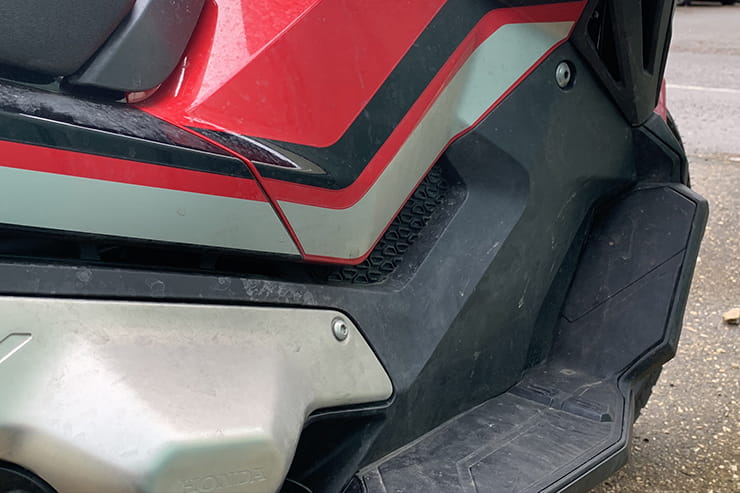 The footboards make the riding position half scooter, half cruiser. Weird…but you knew that already

You can’t use your weight to put pressure through your legs to add control on a wet corner. And because the weight distribution lets the X-ADV handle more like a bike than a scooter, you take liberties that would benefit from such additional control.

In time you adapt and, after three months I’m comfortable chucking it into greasy corners knowing there’s enough ability in the chassis and Bridgestone A41 tyres to get me out the other side.

So, if you’ve always fancied a tall-seated cruiser that handles like a half-decent roadster, with the practicalities of a scooter and looks like an adventure bike, Honda has just the thing. 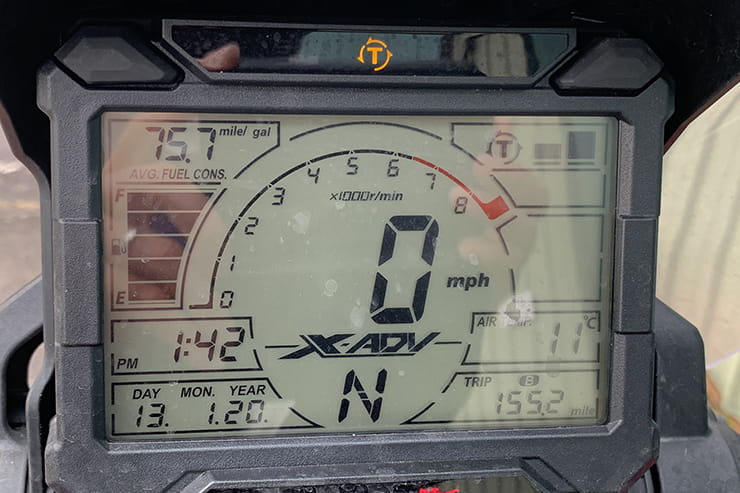 The performance is better described as ‘adequate’ than ‘exciting’ for a 750cc engine, but then again, at an easy average of 70mpg the fuel economy can only be described as exceptional and the build quality is stunning, as it should be for a bike costing £10k.

There’s one thing I’m still struggling with; very slow riding and coming to a halt. The wide handlebars and bulky handguards are set low enough that they bother car mirrors when filtering. This makes getting through the queues harder than it should and, while not having a clutch lever is more relaxing in traffic, the pick-up point between no-drive from the DCT and drive is intrusive at filtering speeds, making it less smooth than it should be. Plus, widest point of the X-ADV’s bodywork is at the exact same spot where your legs need to be to get them on the floor at a junction. Your feet are already a long way forward and the width of the engine in just the wrong place combined with a relatively tall seat means getting your feet down feels clumsy. It’s easier in jeans than bulky winter trousers on top of two layers of thermals, and I know that no one buys a bike for how easy it is to get your feet down. But if your daily ride involves a lot of traffic, junctions and lifting feet up and down in many layers of bulky kit, I’d suggest you buy an NC750X instead. 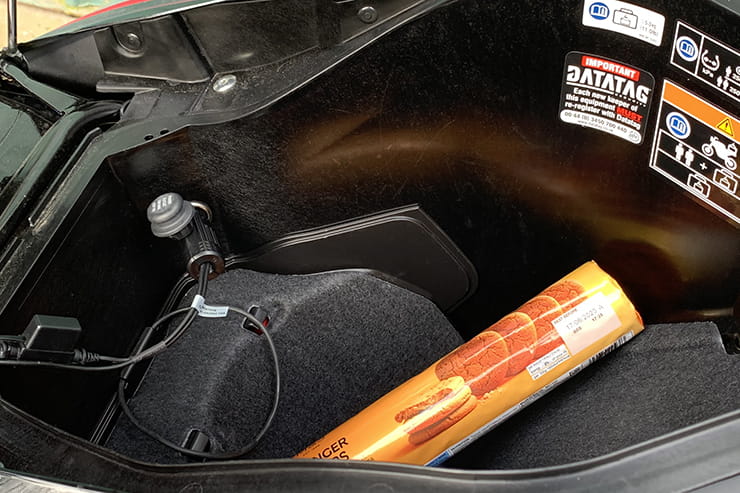 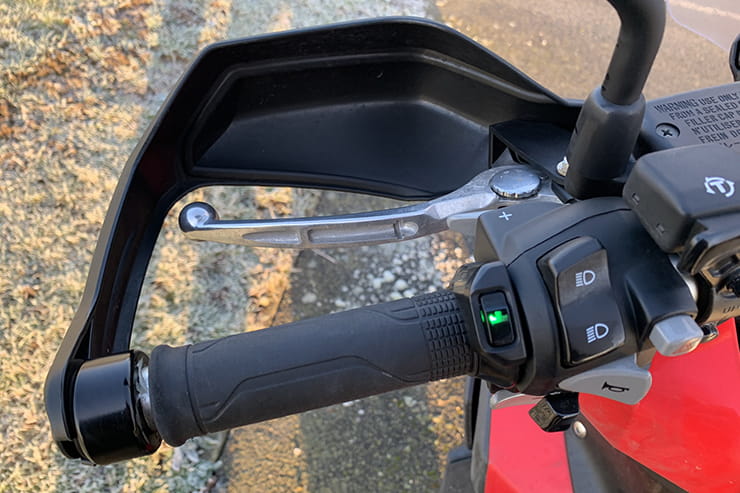 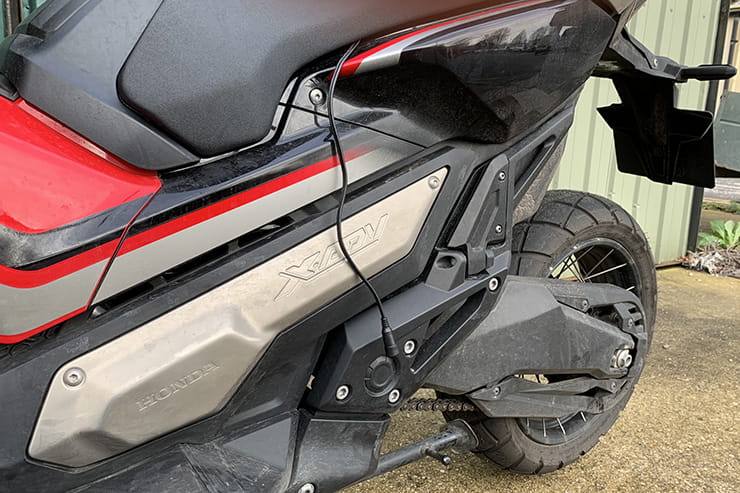 Honda heated grips are warm, rather than hot. Keis heated clothing wires in via the 12V socket under the seat (which can store enough ginger nuts to keep a squirrel happy all winter)

Apart from that I love it. In town or the backroads, the X-ADV nips and tucks through traffic and scratches surprisingly well. Out of its comfort zone on long motorway trip it prefers being ridden gently, focussing on average speed, not tailgating. The reward for this saintly behaviour is 75mpg and a riding heart rate half that on any other motorcycle.

And the enormous space under the seat plus optional Honda top box adds more useful storage than side panniers without further compromising the X-ADV’s ability to filter.

Seriously, you should try one 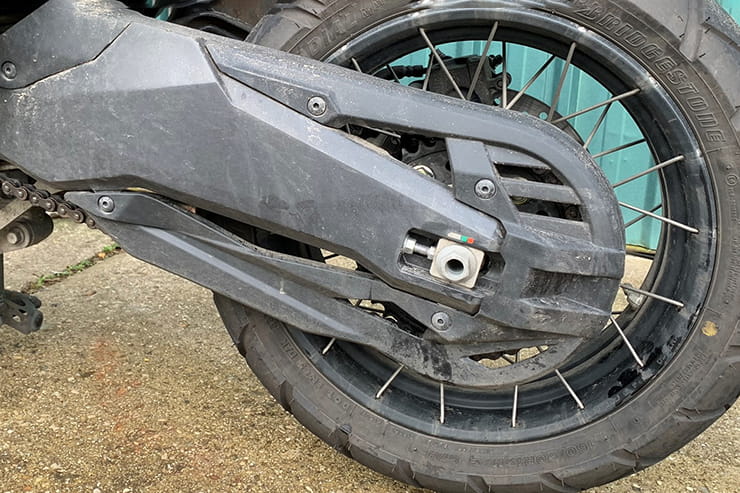