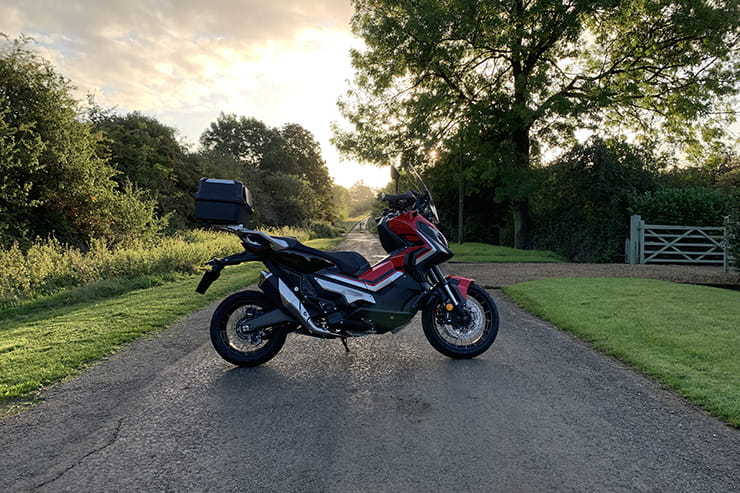 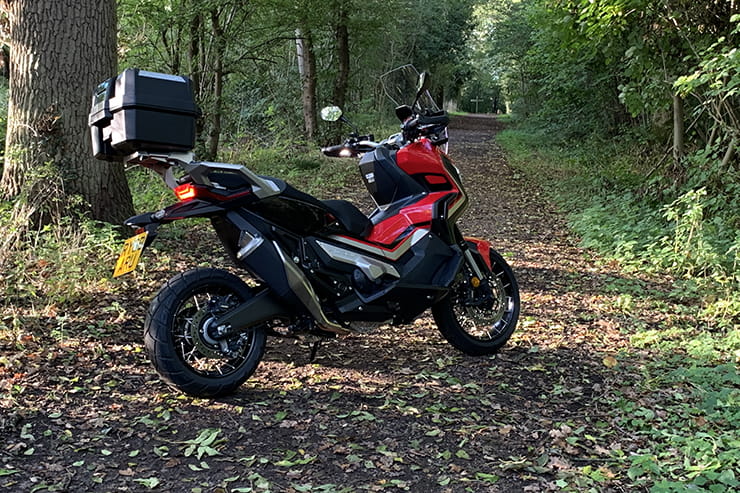 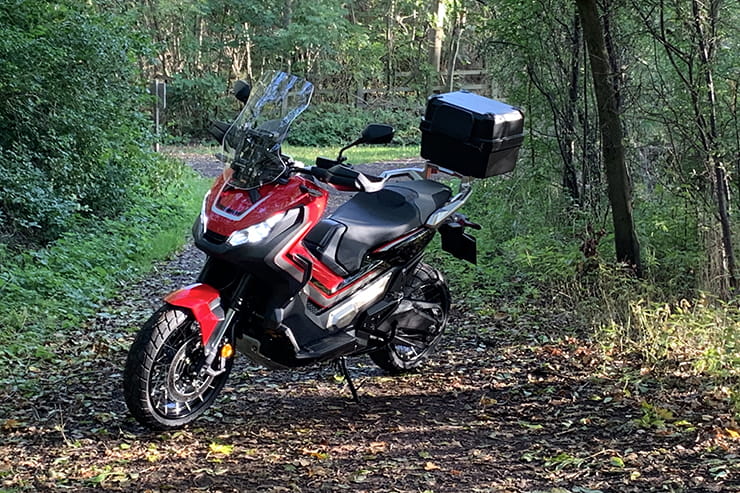 The thing we all secretly love about Honda is how, despite being known for smart, reasonably conservative engineering, considered design and generally being the nerdy-swots of motorcycling, every now and then they build and launch something that is so clearly batshit crazy that you wonder whether they have an official position of ‘Director of Eccentric projects’ who they have to indulge every now and then. From the MotoCompo scooter-in-a-suitcase to early FireBlade. CBX1000 to DN-01, NR750 to Vultus and a dozen daft ideas inbetween, Honda has the capacity to surprise us. So when they announced the X-ADV, a 750cc adventure-styled scooter/motorcycle hybrid on stilts, the only question left to ask was ‘Why does it not have seven wheels?’

Sometimes these hard-to-fathom Hondas are disappointing to ride. But in the case of the X-ADV, it’s the opposite. Based on the NC750 – a bike for which the word ‘worthy’ could have been invented – you’d have been forgiven for expecting the X-ADV to be sluggish, heavy and clumsy through corners. I ‘get’ the NC750 range and the Integra scooter too. I like the easy performance, economy and handling in town, but you rarely get off one and give it ‘that backward glance’ as you walk away.

This bike is very different. The idea of it is so crazy that you have no expectation, just curiosity. And so, when you look down at the speedo to see 80 when you were expecting 60…in the middle of a reasonably tight, B-road corner, it doesn’t take long for curiosity to become respect to become affection – bikes like this shouldn’t do things like that. 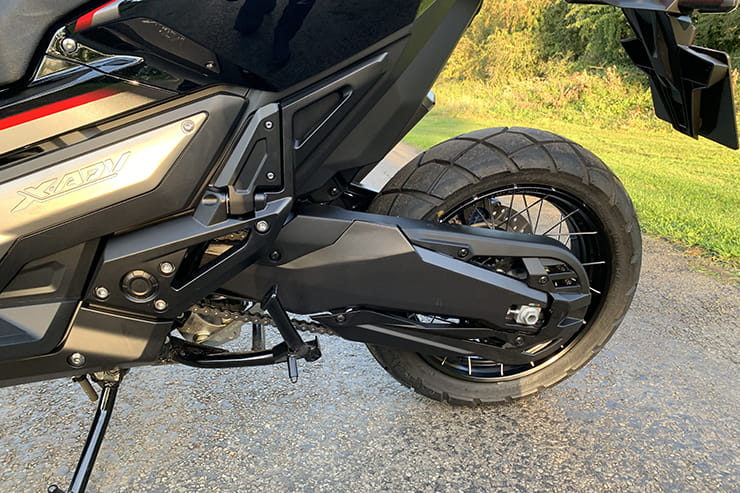 Chain drive, but mostly enclosed to keep it cleaner and reduce maintenance

The first thing you notice is the quality. Scooters aren’t usually built like this and if you’ve had any experience of pretty much any other maxi-scooter… ever you’ll recognise how much better-built the X-ADV is. £10k is a lot of money (but the X-ADV isn’t alone among big scoots in charging this money), but the Honda is feels like a very high-quality product.

And, in truth, I’m still not sure if the term ‘scooter’ applies. Scooters have engines at the back, a gap in the middle and CVT transmission. This, er, ‘mongrel’ has the engine in the middle, like a motorcycle, a hybrid manual/auto gearbox that is based on a proper box of cogs and no gap in the middle (more of that later). 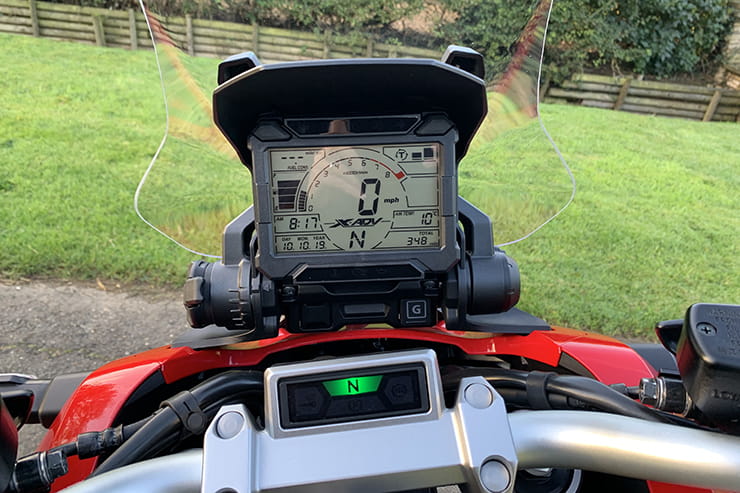 Two years ago, this was funky. In 2019 we all expect full colour TFT on our premium motorcycles. ‘G’ Button under the clocks gives more grip off road

Having said that, things move quickly in motorcycling these days and, after a summer staring at bright and colourful TFT screens the X-ADV’s enormous LCD unit looks ancient, is frustrating to navigate and has few functions worth waiting for. The keyless ignition works well though and things like the steering lock show others how easily these things can be done. Fuel filler cap and lifting the seat are easy and obvious operations and there’s enough room under the seat for most commuter-styled full face helmets (those with enormous vents on top might struggle to fit) or a large water melon. There’s also a 12v socket so your melon will be fully charged on arrival.

If you’ve never used Honda’s dual-clutch-transmission (DCT), the first few miles will be interesting. There are three modes; Drive, Sport and Manual. In Drive the transmission changes up the gearbox very early – you’ll be in top by 30mph – and hangs onto the gears for a long time as you slow down. No one knows why it does this – fuel consumption isn’t improved and opening the throttle for a quick burst of acceleration brings a hollow burp of forward motion until the gearbox makes up its mind. 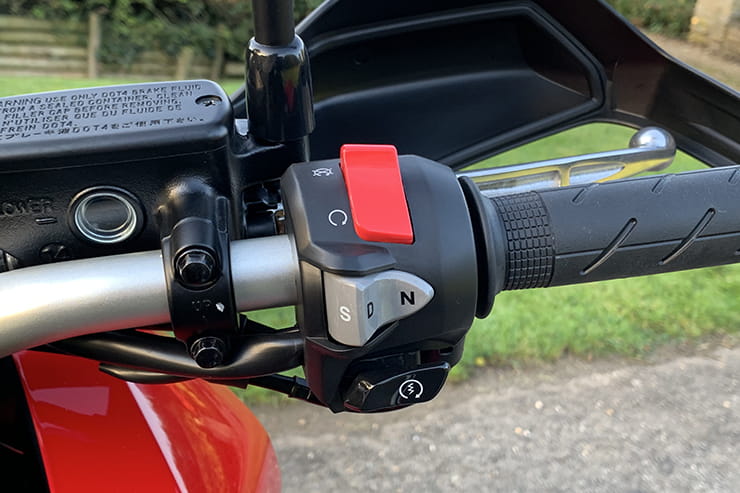 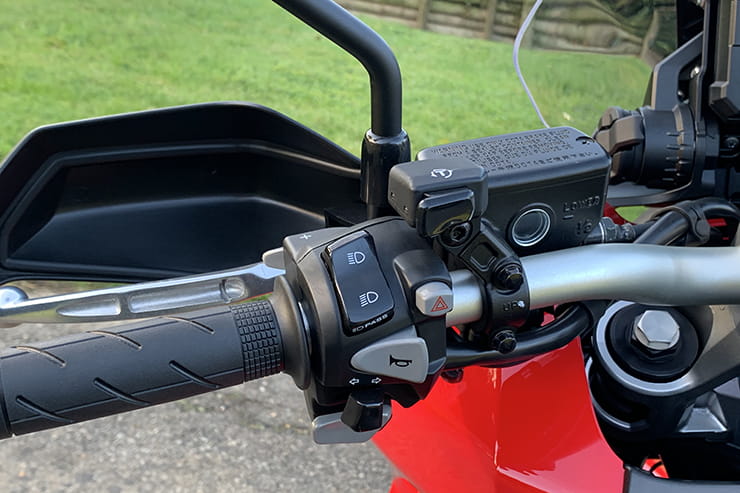 Sport mode is much better; holding onto gears for longer before changing up and changing down sooner. In town we’d use Sport mode, but on country roads Manual mode, where you use the paddles on the left-side switchgear change up and down (there’s no clutch – the rear brake lever is on the lhs handlebar) is best.

There is also a G-mode for off-road riding (for which, you’ll also want the optional footpegs that fit just behind the footboards), which reduces wheelspin off road

The handling is surprisingly good for a fat-tyred feet-forward motorcycle/scooter thing weighing 238kg. Something about the weight distribution, steering and chassis works better than it really should. What makes it harder is that the seating position - feet forward, arms straight, all the weight through your arse – makes it harder to shift bodyweight or even steer the wide bars with any force. None of which seems to bother the X-ADV in the slightest. If it bothers you, then buy the optional footrests (we’re going to try some soon) that should allow more traditional rider input.

It’s early days with BikeSocial’s X-ADV. We’re planning to run it through autumn and some of winter because we think it will make a funky long-distance commuter with build quality to see off the worst that the bad weather can throw at it. 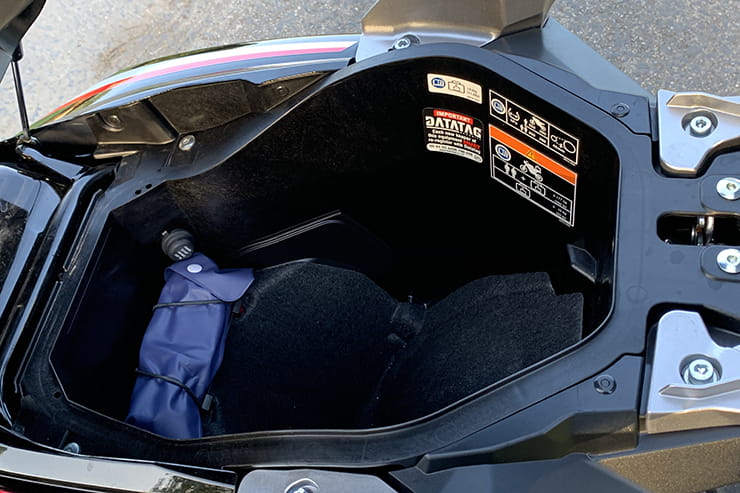 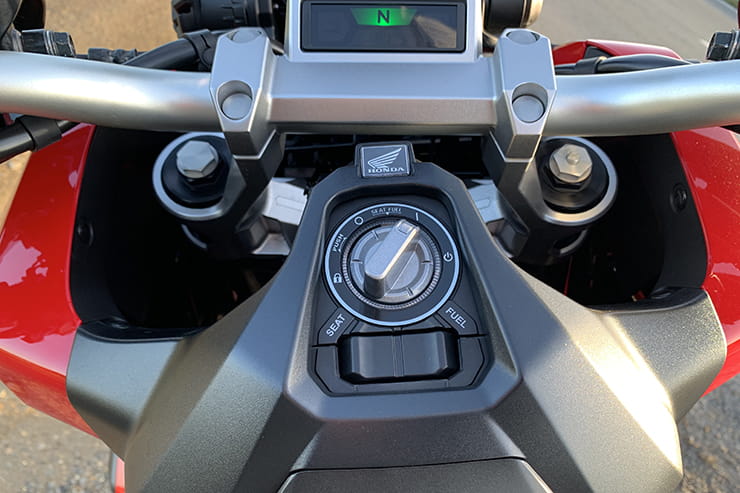 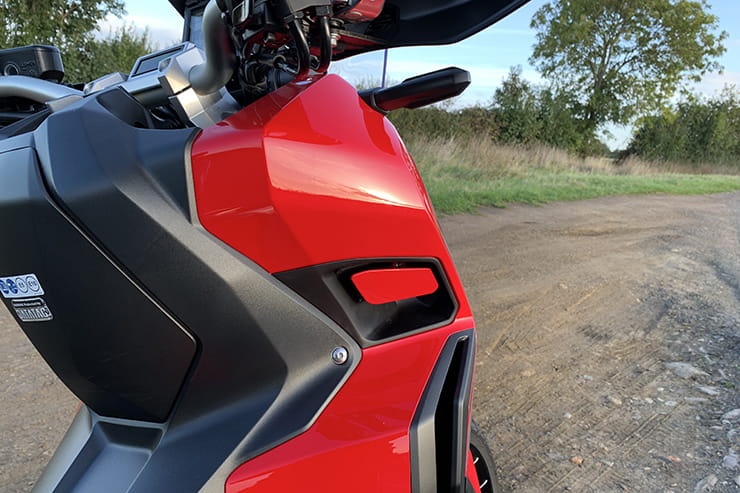 Decent underseat storage with 12v socket, keyless ignition and fuel filler, plus a handbrake (because DCT means you can’t leave it in gear on a hill)

So far we like the tall screen, reasonable weather protection 70mpg consumption and general hilarity of being aboard it. The biggest challenge is getting used to the combination of height and width. The seat isn’t too tall at 820mm, but it is very wide and the positioning of the engine makes it harder to get your feet down than on a more conventional bike.

But, if you wanted convention, you’d have bought an NC750X and saved yourself £2500.