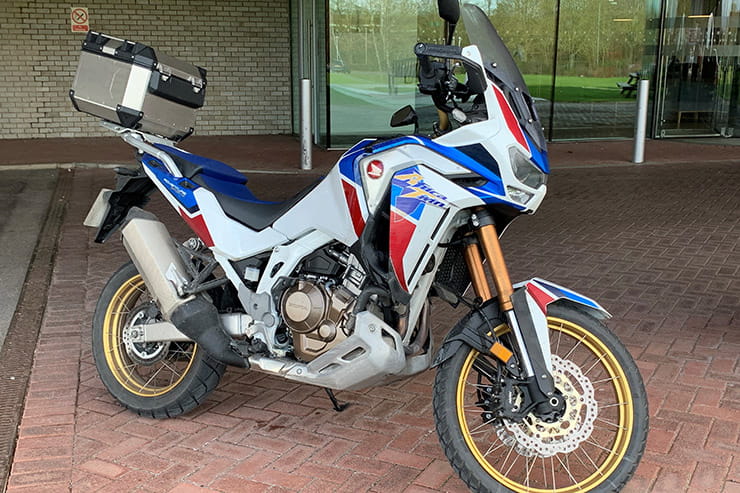 The miles are coming thick and fast. Just over 2000 in three and a half weeks riding and we’re only just into March. And that’s the point for me. If you’re going to spend this much money on a bike, you want to be using it at every opportunity. For those of us who see bikes putting the ‘fun’ in functional grinding-out-the-miles in March is as important as the big adventure in summer.

This is the time you get to know the bike – what it does well and how to make the most of the tech. Three things I learned last night:

Nothing about any of the above bear any resemblance to the sand-tinted, rooster-spraying, escapist adventure-fantasy. In fact, nothing about the M11 inspires anything other than frustration at trucks and whichever road planners decided that two lanes is sufficient for the major commercial freight route connecting the south east to the midlands. Navigating my way through that lot on a Tuesday evening in rush hour is as much of an adventure as the brochure’s desert fantasy. 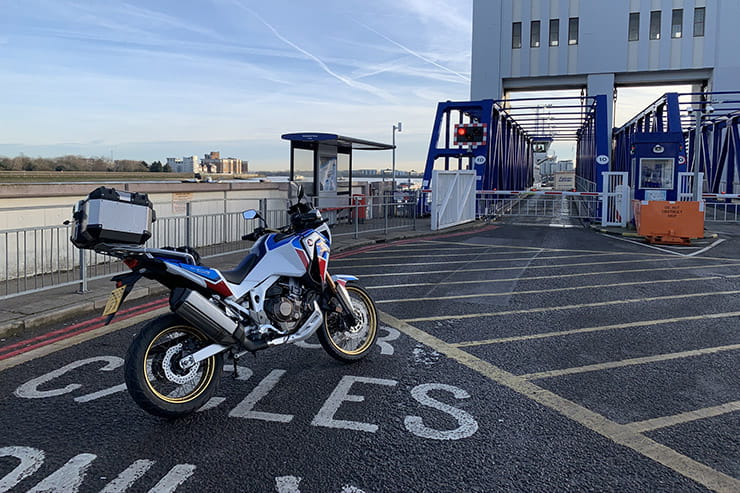 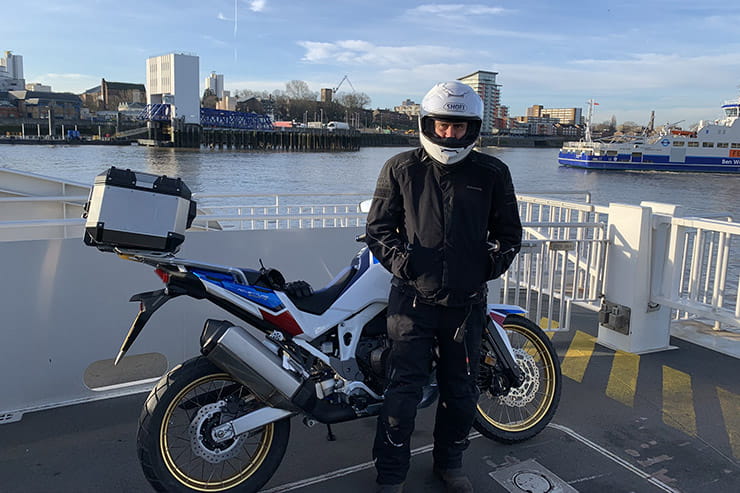 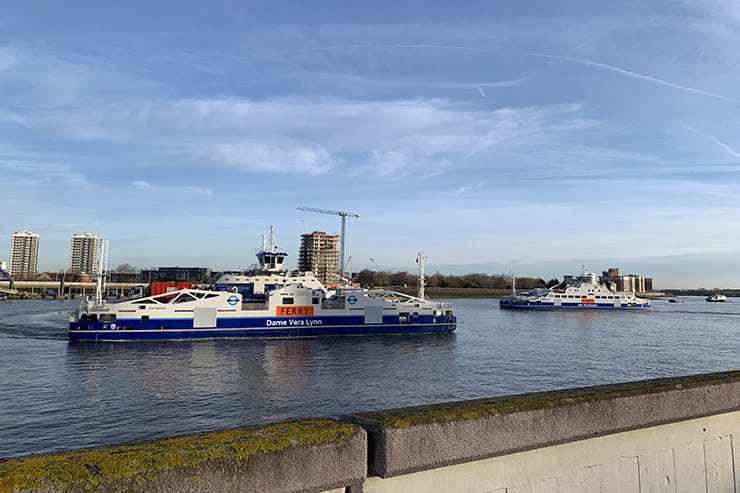 The Woolwich Ferry. Possibly the most adventurous thing in…Woolwich

This is a bloody good bike when what you need is functional, efficient transport. And it encourages you to find some humdrum, urban adventures. Last month, riding to the London Motorcycle Show, I swapped the M25 for a ride through south London, crossing the river on the Woolwich Ferry instead of the tunnels. Not the quickest route, but the view down the Thames through the barrier of the City is lovely and the experience (it’s free and takes about 20 minutes including waiting to get on and off) is something a bit different.

I haven’t pushed the tank range beyond 250 miles yet, but I’m pretty sure I can get another 50 if I need to. Likewise, I haven’t been flat out on it either – can’t see the need when it covers ground from point-to-point so quickly. The armchair pundits will criticise Honda for ‘only’ giving the Africa Twin 100bhp, but when you ride it you never notice and the easy, soft usability is more important for 90 per cent of the time.

The handling through greasy roundabouts and semi-flooded, ready-salted February backroads has been as composed and confident as I hoped it would be and the now-bedded-in electronic suspension makes stupidly light work of the pock-marked craters that pass for a road surface these days.

Honda sent a link to this; https://powersports.honda.com/legacy/mksa/index.html#simulator

which helps explain the options and set-up a little more clearly, but I still haven’t even looked at the manual or begun to explore the possibilities for setting-up the electronics, Bluetooth and media. I’ll save that for the really long journeys. 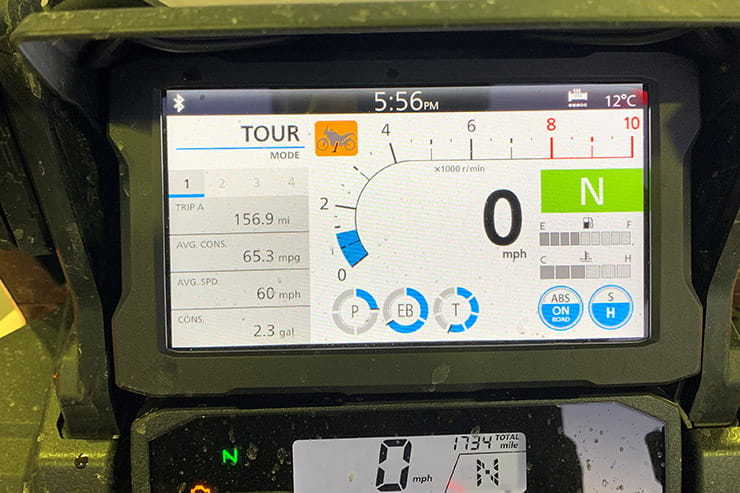 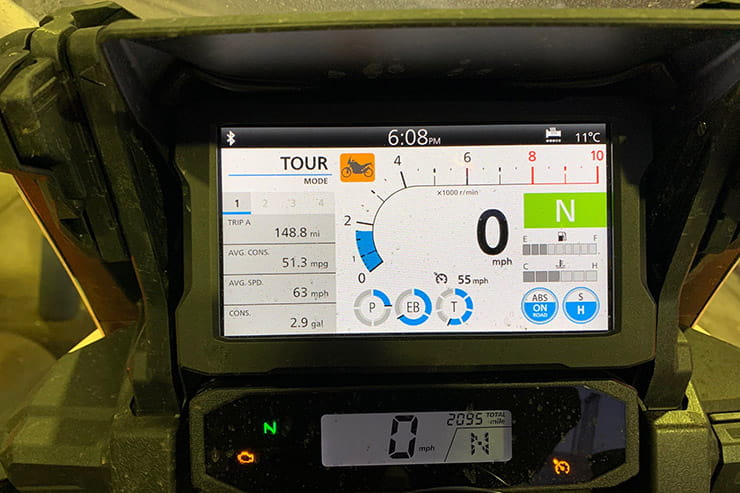 Two journeys, one fast and frantic, the other calm and measured. 3mph more average speed requires £3.50 more fuel to do ten miles less

Now the bike’s run in most of the initial stiffness in the gearchange has gone, the throttle response is clean and sharp, like you’d expect from a 21st Century Honda and (just-about) everything is lovely.

There are just three niggles. Firstly, the seat height. I shouldn’t complain because anyone who buys one has already made the decision to either live with it or fix it. At six-foot-nothing I struggle to get my leg over the bike in winter kit. That’s crazy and it’d be worse after your fifth fall in an hour riding off road where you might not be able to get the stand down to assist. 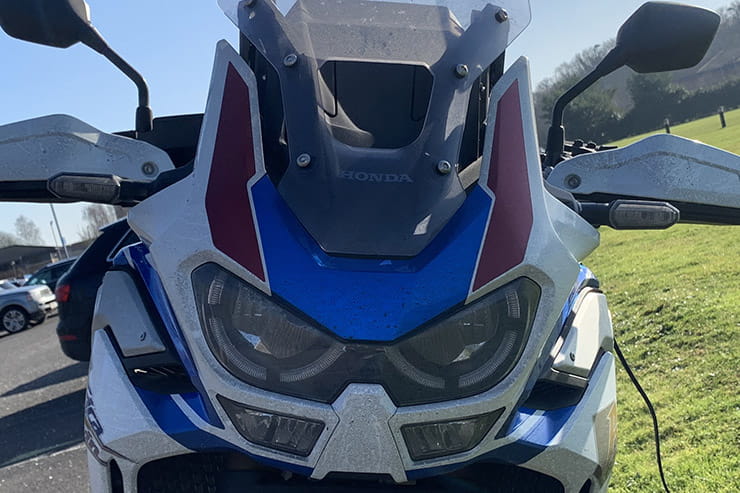 So tall it blots out the sun

The other night at the end of a very long couple of days at work - knackered, soaked, windswept and very weary, I stopped for petrol 30 miles from home and couldn’t get my right leg over the seat to get off the bike. In the end I had to stand on the pegs, swing my leg over and climb off the bike.

The flip side of this is of course that the Africa twin, in these colours especially, looks absolutely right in every sense. The road presence is very welcome when filtering and the mirrors are the right height to avoid car wing mirrors and most trucks too. It’s the most beautiful adventure bike (not a hard challenge, admittedly) on sale by miles and every time I look at it I want to ride it. When Honda gets this stuff right, no one else comes close. The proportions are perfect, if only it was 25 per cent smaller. Maybe I just need some platform-soled 1970s-tribute adventure boots, but I’ secretly hoping that there’s an NC750-based Barnsley Twin (now that would be an adventure) coming along next year. 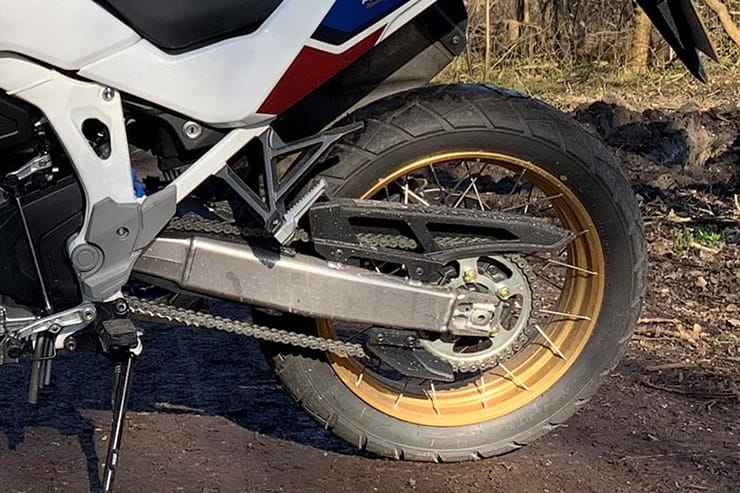 The second niggle is chain adjustment and lubing. A centre stand is a £200 option (on a bike already costing £16k), but the lower chain guide prevents the use of a paddock stand meaning the only way to lube the chain is to either find a friend to do it while you lift the back wheel off the ground on the sidestand or lube a small section, move the bike forward, do another section and repeat until the whole chain is lubed, by which time you will have travelled so far it’ll be time to adjust the chain again.

Big twins ask a lot of their chains and regular maintenance is essential. I’ve been adjusting mine every two weeks (1200 miles), which is still too long – even on a new chain getting a relatively easy ride - and lubing it every 500 miles. If I were buying an Africa Twin I’d negotiate to get a mainstand thrown in with the deal.

Finally, and this is more about getting used to the bike than a fault, braking hard, like every other old-school trail bike results in half a second of suspension travel before the actual braking. BMW’s GS has a trump card here in Telelever front suspension that works independently of the brakes. I’m hoping to improve the Honda’s performance by dialling in some extra engine braking – I’ll let you know if it works. 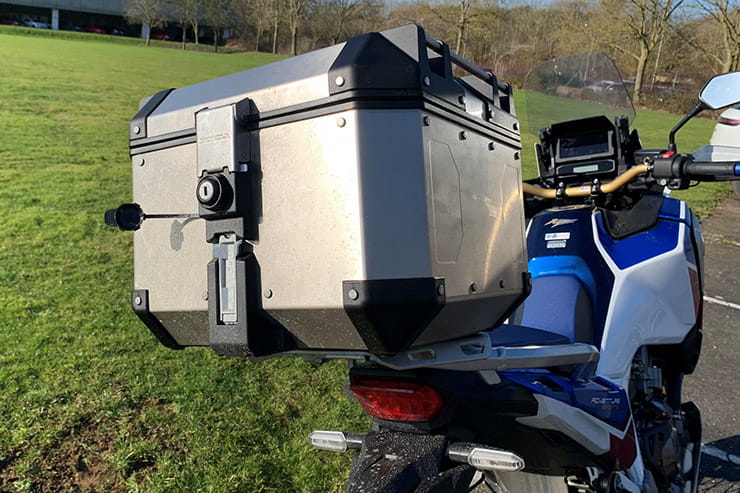 Honda’s top box is huge and very spacious, but sits high up and care should be taken not to overload.

Three things I’m not so sure about