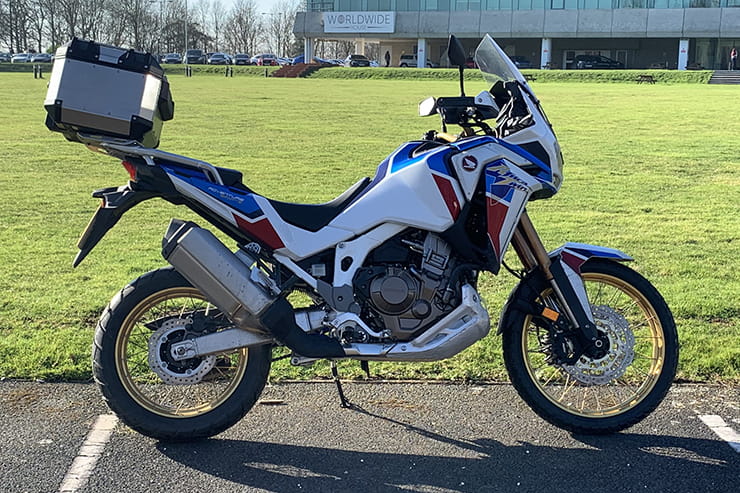 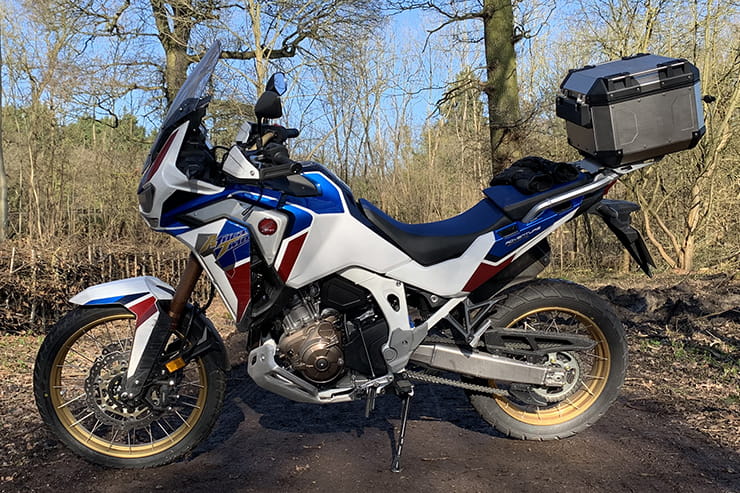 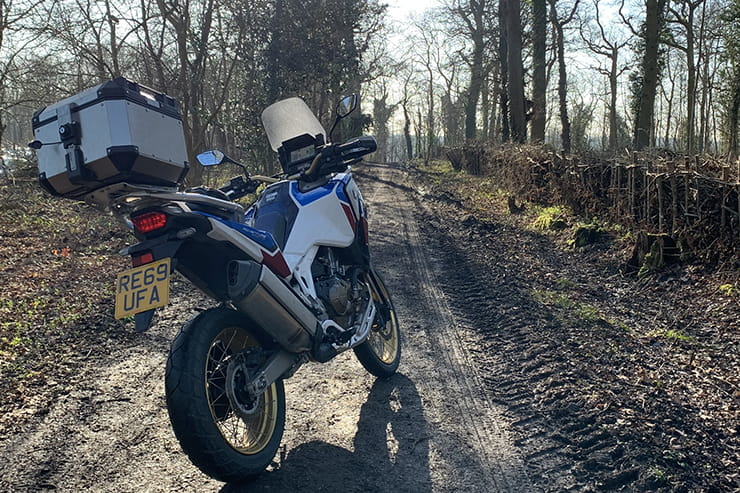 Three hours later a combination of Honda’s 2020 Africa Twin’s poise and stability, plus semi-scientific faith in the physics behind a 21-inch front wheel, wide handlebars and that any bike designed for crossing the Sahara should be able to cope with a bit of wind see me and this very capable motorcycle pull up outside the office, safe, smiling and relaxed. Wow.

Three years ago I inherited BikeSocial’s previous Africa Twin long term test bike in January and spent the cold and windy bits of early 2017 cruising round the UK at balloon height with an equally daft grin, a reminder of how good Honda’s DCT gearbox is and surprisingly cold fingers for a bike with factory heated grips. Honda’s ‘we’ll do it our way, thank you’ not quite a middleweight, not quite a monster adventure bike worked better for me on the cold, slippery, salty roads than it had the previous summer when I first rode one.

Maybe it’s just me but there’s something about the phrase ‘adventure bike’ that puts me off. Partly because every bike is an adventure bike - because every single ride on a motorbike ever has been an adventure for me – but mostly because these high-rise motorised pogo-sticks are much better than that. Ironically, as just demonstrated in Storm Ciara, the best of them have a knack of taking the drama out of potentially scary situations. 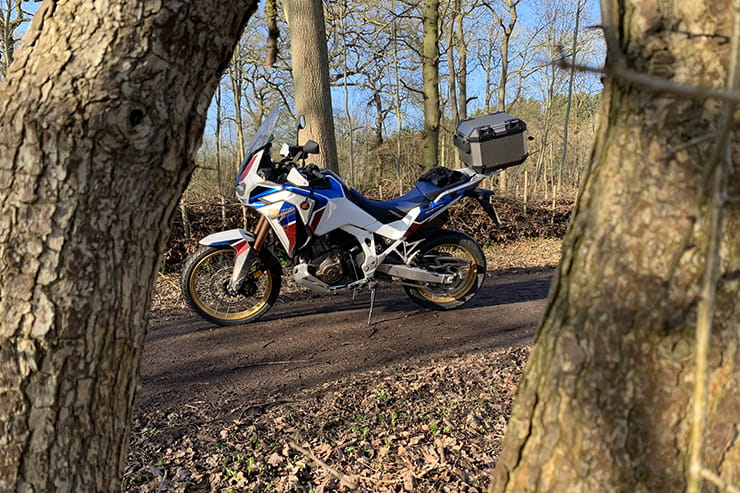 This is the fantasy, as yet unfulfilled. Maybe next week

I understand the need for proven off-road ability because, the ‘I could if I wanted to’ adventure fantasy is as vital on two wheels as it is to the 4x4 ‘of course I need a snorkel’ brigade. And while I don’t doubt that you can take this 238kg (before adding crash bars, extra lights and luggage) touring bike off road if you want to, you’ll definitely find things easier on a CRF450L. I can only see it as a road bike

The reason these bikes have taken over our motorcycling in the last ten years is simply because they do what so many of us now want a bike to do so flipping well. Comfy, fast, credible and as enjoyable in their own way as any sports bike. I’m not sure that ‘tall-rounder’ is as evocative or emotional, but for me, it describes what they do much more readily. Tall-rounders come without the expectations of wheelies, knee-down and all that nonsense that we used to think important. Plus, it’s ok to be an ageing, weather-beaten, wily adventurer and, in most cases it’s alright to put a pillion on the back too because they won’t affect the handling and can share the enormous costs of buying and accessorising one.

BMW’s GS aside, it’s taken the other manufacturers a while to find their own particular tall-rounder mojos. Honda, having been one of the first in the game with the Transalp and original Africa Twin, then took a 22-year nap before launching the ‘look guys, we’re serious’ 2016 CRF1000 Africa Twin.

That was a very good bike and (helped by some cracking finance deals) sold a lot of units. This one, the 2020 CRF1100 Africa Twin is much better.

Honda’s new Africa Twin marks a significant change for a company that traditionally prefers solid, well-executed engineering to flashing lights and snazzy functions. Aside from 45 years of Gold Wings, the 2020 Africa Twin is the first time I can remember that Honda went for the ‘full Amstrad’. Except, being a Honda, that should probably be the ‘full Sony’, because, aside from a few niggles, this is a classy piece of kit. 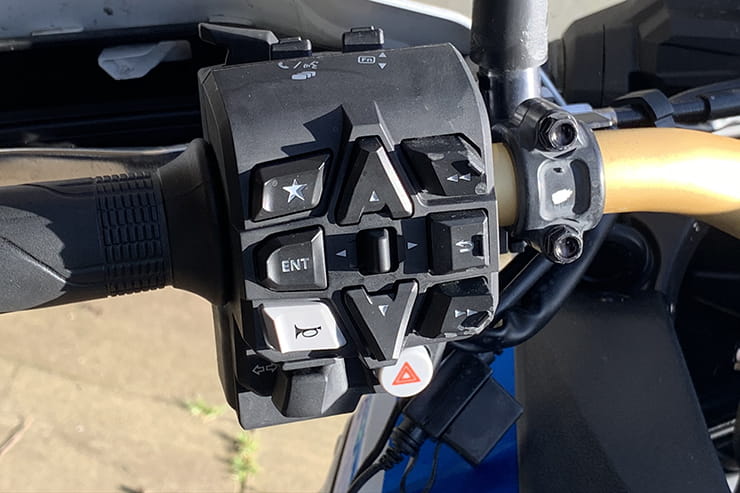 If you were never allowed a 1970s synthesizer, this is the bike for you. Thankfully, it’s relatively simple to learn and the TFT screen is touch sensitive (even with gloves on) for night-time use

Those electronics are, according to the riders at the bike’s press launch, extremely effective at helping non-expert off-road riders stay sunny side up on dirt, despite a fully fuelled Africa Twin, with luggage, rider and kit weighing almost 350kg.

Most of us will never ride one off road because we have a medical condition called ‘sanity’ that prevents us driving our cars underwater, jumping off a cliff while flapping our arms or ignoring a carefully constructed, easy-to-navigate road system in favour of charging through a field full of mud on a 238kg motorcycle.

For us, the Honda’s clever electronics are something we’ll fiddle with for a while, find a setting we like and then rarely touch again. The most important question in my mind when I went to collect the bike was ‘Will Honda’s heated grips finally be warm enough for winter?’

The answer to that one is yes and so far, in a little over 700 miles I’ve learned three more things. Firstly, you can lower a bike’s seat by 50mm (almost two inches) and it still be challenging to get your leg over. Secondly, that, the new engine feels stronger and punchier everywhere and sounds surprisingly bark-y for a road legal Euro-5 ready unit and, thirdly that the latest semi-active suspension really does react fast enough to smooth out bumpy roads.

Our bike had 20 miles on the clock when I collected it. The manual says avoid full throttle acceleration, be careful to bed the brakes in and avoid excessive anything for the first 300 miles. The first service is at 600 miles. 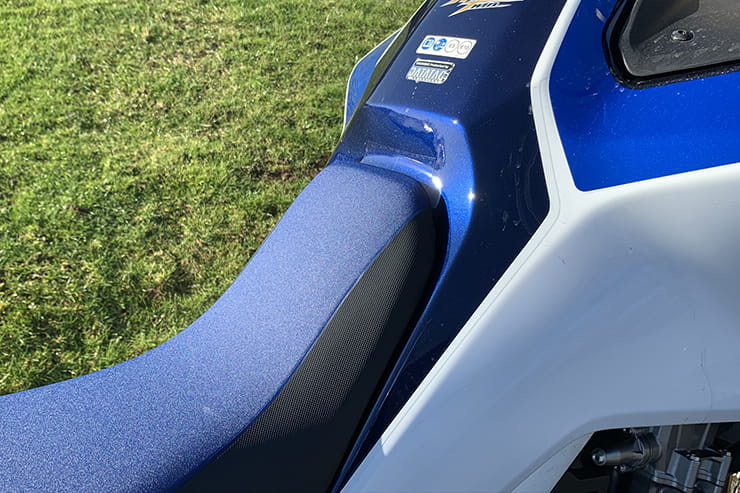 Lowest setting is an acceptable 850mm, given that it is also narrow. It’s also extremely comfy over distance.

Let’s talk about that seat height because it dominates the early experience of AT ownership. The 2020 Adventure Sport version is 50mm lower than the old one but is still a challenge to swing a 32-in inside leg over. The sidestand leans the bike a long way over, which helps the first bit – getting the leg actually over – but hinders the next part – lifting the bike off the stand with only your left foot on the floor. It’s a knack and so long as I don’t park on a slippery camber, I’m comfortable with it, but it took a few days to find the technique.

I’ve got the seat in the lowest position which exaggerates the tallness of the very effective-and-easily-adjustable screen, even in its lowest position. In daylight we naturally look a lot further into the distance and so the screen height isn’t an issue. But riding at night where your gaze comes back to the arc of the bike’s headlights, I find that most of that pool of light falls in front of the (usually filthy because it’s winter) screen. Looking over it, far into the distance doesn’t work because…it’s dark. So, I find myself looking around the side of the screen into the pool of light, which is actually very bright and effective, if only I could see it.

Raising the seat would solve the problem and once, winter passes and I’m wearing less layers I will hopefully be able to swing my leg over the taller seat. For now, the solution is to either peer around it or stand on the pegs like a proper adventurer. 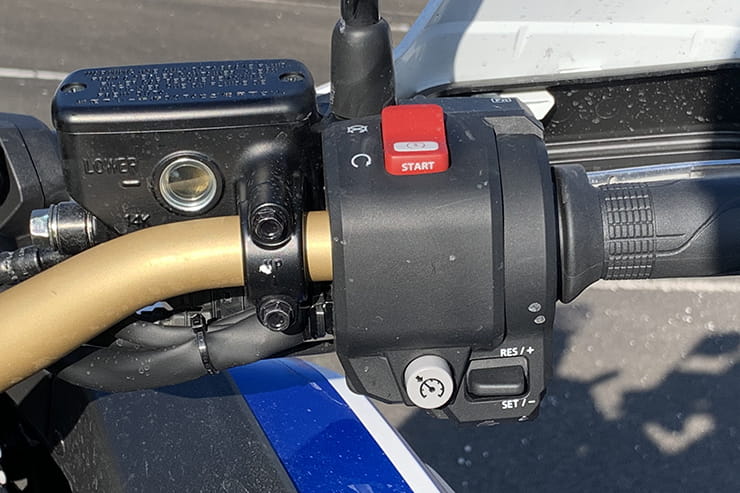 RHS switchgear is simple and clutter-free. DCT bikes have the controller in the middle of this.

The Honda’s ignition still requires a key (how quaint). Tap the starter once and the motor keeps turning till it fires without the need to keep pressing. The lovely TFT screen takes a few seconds to boot-up and won’t let you in without pressing OK to the message from your mother reminding you how everyone would prefer it if you bought a nice little car. KTM’s invitation on their start-up screen of ‘Ready to race’ suggests they didn’t get the memo. Maybe it’s the off-road thing. I’ve never seen any road bike electronically absolve itself of responsibility of what might be about to happen before.

The new engine feels strong at low revs. Smooth too, revving quickly and cleanly. There’s plenty of punch and while running-in I’ve self-imposed a 5000rpm redline (just under 90mph in top).

One thing I wasn’t ready for was the comfort. The new seat is narrower than before and doesn’t look like it’d be comfy for three hours in the saddle. But it is, helped by a riding position that puts arms, legs and curvature of the spine in exactly the right places.

Clutch and gearchange (ours is a manual bike, not the DCT) are a bit clunky, but still bedding-in and the fly-by-wire throttle is taking a bit of getting used to. Specifically, the engine braking characteristics, which are adjustable and programmable. There are times when I shut the throttle and it feels like there is almost no engine braking. But other times, especially when filtering on an almost closed-throttle, the AT sort-of lurches in an exaggerated way that most big twins no-longer do. The upside of this is that, being programmable I can tune it out. But I want to wait till after the first service because all bikes take a while to bed in. 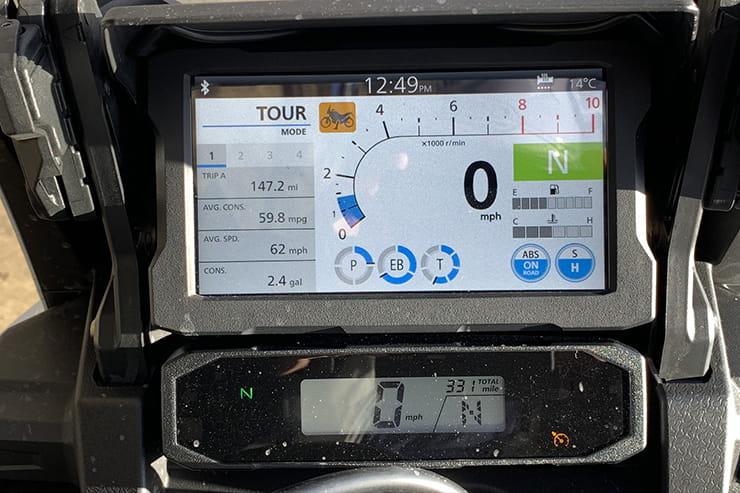 TFT screen is clear and easy to navigate. Lower LCD displays essential info if the TFT is being used for navigation or Netflix (probably)

Likewise, the fuel consumption is getting better with every tankful. Ridden like a man who is half an hour late for something important I just got 54mpg from my fourth tankful, which is the same as I got riding like a nun with short arms on the first one. I’m confident that sensible riding will get 60mpg, which means an easy 300 miles from the 25-litre tank.

The accessible 12v socket makes plugging my heated kit in easy and the USB socket on the other side of the dash will do the same for keeping my phone charged once I choose one of the many reasons (music, navigation, phone and Apple Car-play – whatever that is) to connect it.

So far, I know I’ve barely scratched the surface of what this bike can do and it feels that the range of programmability and adjustability should make the 2020 AT a genuine tall-rounder.

Now it’s run-in the fun can start… so long as Mother’s not looking. 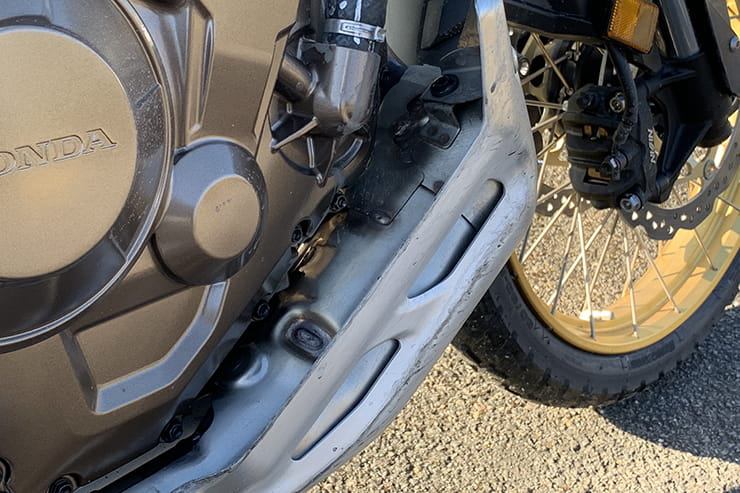 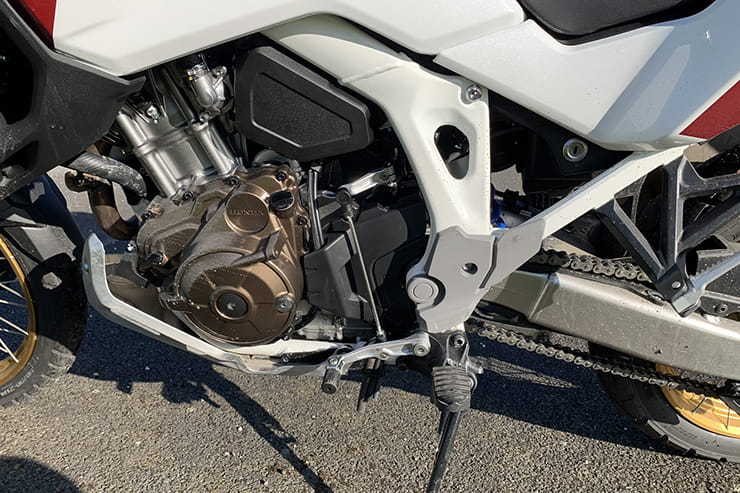 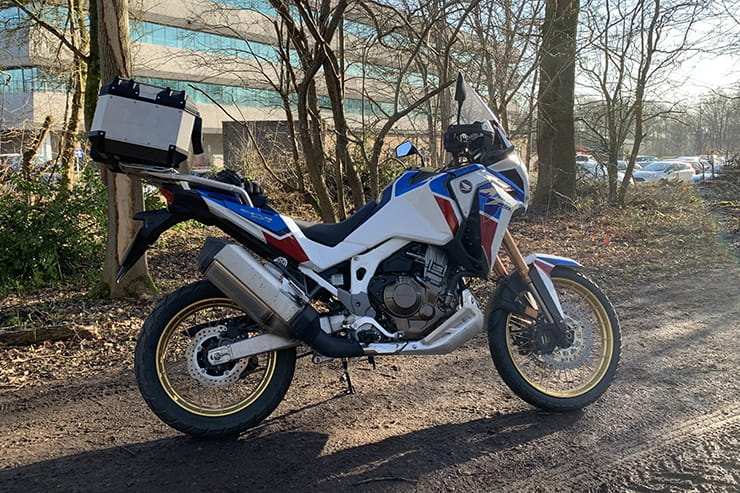 Three things I’m not so sure about