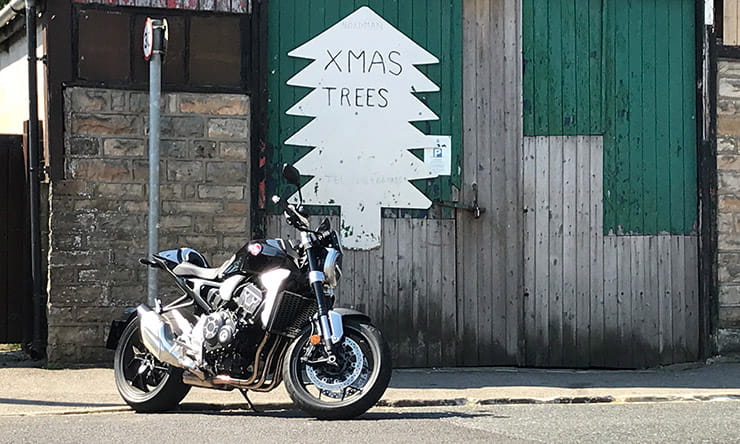 Honda describes its new CB1000R as a ‘Neo Sports café’ racer. I have a problem with that. The whole café racer thing needs a reboot, but we also need a different name. The legendary Sixties stories of ‘drop the needle on the record, ride from the caff to the flyover and back before the song finishes’ were clearly piffle. Most tuned-up, ton-up Triumphs (and none of those old sixties Triumphs would actually do 100mph, ever, at all, whatever the owner says) would have broken down by the time Mr Cochran had got his blue, summertime case anywhere near the United Nations.

But the legend stuck and, thankfully it only died out because in the 1970s when progressive rock landed, every song worth its wax was a 25-minute jazz odyssey with string section and percussion solo (with gong), meaning even your nan could make the flyover and back on her Puch Maxi.

A few years back the café racer made a comeback. Mischievous hipsters turned unwanted Japanese and German garbage into stylish-looking custom bikes. Adding a 60s-style race seat, some polished alloy and liberally applied exhaust bandage could treble the value of an old and unwanted BMW R45 from 90p to almost £2.70.

Most of the manufacturers saw an opportunity and Honda are the latest to put their tanner in the jukebox. My problem is that this bike is far too good to be called a café racer because that term implies some kind of half-baked style-over-substance nonsense that’ll be horrible to ride, impractical and fall to bits.

The CB1000R is none of those things. To be fair, neither was the previous model, which was a brilliant motorbike that very few people bought. Honda has given us a clue in the new CB’s dashboard, which has a mysterious soft-focus, multi-coloured light display to the right-hand side that lights up like a 1970s northern nightclub. I think that when they said ‘café’ what they actually meant was Neo Sports Disco Racer – the 12” remix version that goes on forever.

Once that clicked, it all made perfect sense. 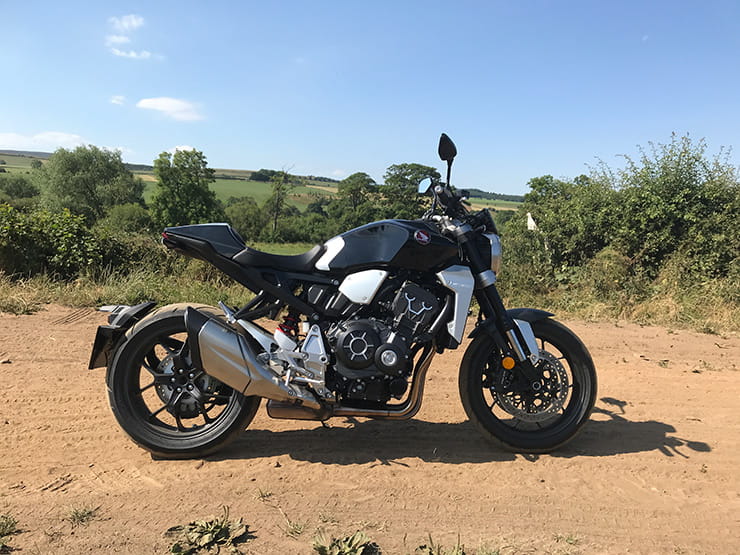 I love this bike for the simple reason that it is just so bloody great to ride. I know some will dismiss it for only making half a million horsepower, having at least two-too-many cylinders and not having the ‘character’ of a Ducati, Aprilia, KTM or Triumph because it’s a boring four-cylinder Honda. But those people are fools. More often than not what we call ‘character’ is the stuff that Honda simply fixes properly before a bike goes on sale. A lumpy v-twin clattering and banging its chain at low revs isn’t ‘character’, it’s bad engineering. And a gearbox that doesn’t find neutral or suspension that purees your kidneys are not ‘character’ either. They are unacceptable on a bike probably costing more than the entire recording of Summertime Blues and Saturday Night Fever put together. If you were buying a telly I’m guessing you buy the well-developed, fit-for-purpose Sony or Samsung and not some ill-developed, styled-like-a-1980s-Radio-Rentals Ferguson because it has an ‘authentic’ flickering picture, takes twenty minutes to warm up and has smoke coming out of the back.

Sorry. 527 words in and you might like to know what the CB1000R is like to ride. In a word, engaging. If riding Yamaha’s MT-10 is like trying to wash two angry tom cats in a sink, then chucking the CB1000R down a bumpy, twisty road is like polishing your favourite haddock while trampolining. By that I mean largely pointless, not something you’d have considered a few years back, but surprisingly satisfying, if still a little challenging and occasionally a little too bouncy.

Shall we get on with the test?

On the outside it’s the same detuned 2006-Fireblade motor as in the old CB1000R. Chosen because this version has the longer piston stroke which tends to deliver torque and midrange rather than outright power. This time the detuning is a lot less radical. The old bike claimed 125bhp, but this one, with the benefit of ten years’ advance in ignition and fuel-injection tech can now make 143bhp and a whole load of midrange too. That’s a harder thing to achieve than you’d think because modern sports bikes make much of their power through enormous airboxes and ram air systems. The packaging of a naked bike leaves less room for an airbox meaning power will always be reduced.

No fairing means stratospheric top speeds are left to the owner’s imagination meaning Honda’s engineers could focus on getting the gearing right so the CB accelerates like you’d hope it to and feels strongest between 6-8000rpm, which is exactly where you want it to.

Very quick off the line and the silky, inline four-cylinder delivery is such a pleasure after being force fed nasty, lumpy, rough-arsed twins for most of the last 12 months. Seriously, riding an inline four these days gives an impression of what our dads must have felt when, after all those years making do on twins, Honda and Kawasaki’s four-cylinder bikes showed how it could be done.

This + version has an up/down quickshifter too which is light to the touch, consistent in its behaviour and works exactly like you expected a quickshifter would and makes you wonder how so many other manufacturers have the cheek to fit such lousy units to their very expensive motorcycles and expect to get away with it. Should you prefer to shift manually, you’ll also delight in the CB’s lightweight, accurate cable clutch.

It’s a lovely package to use; flexible in town, flexible in the twisties too – I did one 35-mile section of one of my favourite Dales’ roads, swapping between 30-85 mph just in third gear because it felt absolutely right to do it. The fuelling is perfect and, even at running-in speeds it was returning 48mpg. 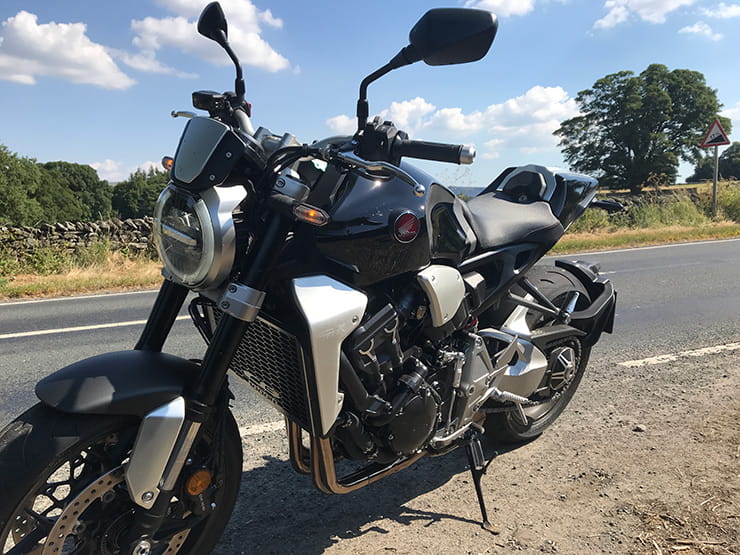 There’s a real nice balance to the CB’s handling. It steers quickly but doesn’t weave or wallow in fast corners. And that, despite having standard suspension settings that are soft enough to bottom out the rear on a bumpy Dales road.

Sitting at the lights in Ripon, bouncing up and down on the suspension it felt very soft and underdamped. I was expecting an interesting ride over the bumps, jumps and lumps of the awesome B6108. But somehow the Honda’s set up kept absolute control of everything. As we turned onto the A684, which is faster, but equally bumpy there were a few moments where the front hadn’t finished rebounding as the rear hit another big bump. This makes the Honda feel lively, but, surprisingly, not out of control. A change of riding style had me steering faster and sharper with the bars to get the lean angle quickly and then balancing throttle, back brake and shifting body weight to keep the suspension more settled. It worked too and the trade-off in comfort from the CB’s soft settings makes this bike faster and more enjoyable than the last few sports bikes I’ve ridden round here.

Once run in, it’ll be interesting to see where the best compromise is in the CB’s settings. It could do with a little more damping control and definitely more preload for my weight, but the standard ride is so comfy it’d be a shame to ruin it.

Radially mounted Tokico front calipers won’t win much credibility with your Brembo-equipped mates on their British, Italian and German nakeds, but this set up, in conjunction with the Showa Big Piston forks is one of the easiest I’ve used to get serious stopping power with an awful lot of feel too. The front lever action is sharp, but not worryingly so, getting rid of speed in a powerful, but predictable manner. The rear brake pedal is positioned like only Honda can – somehow, it’s just a few per cent easier to use than so many other bikes – despite the footpegs being higher and sportier than I was expecting - meaning you can make it part of your cornering tools, controlling the bike’s pitch and yaw with a subtle dab.

The CB feels small and compact, so it’s surprising to discover that the wheelbase is slightly longer than before and the seat height is a relatively conventional 830mm. The footpegs are set high, for which you are thankful in corners (good ground clearance) and cursing on the motorway because they aren’t really set back far enough, meaning your knees are aching after 90 minutes. One of the big differences though is the secondary comfort stuff. Because the bike is so easy to ride, because everything just works how you want it to, you can go very fast for a very long time on the CB1000R without feeling stressed or tired. It’s like the difference between a £150 crash helmet and a £500 one – on the surface they both do the same job, both have soft linings and lots of vents, but the top-spec Shoei somehow makes life easier and you arrive home feeling fresher. It’s the same with the CB1000R. 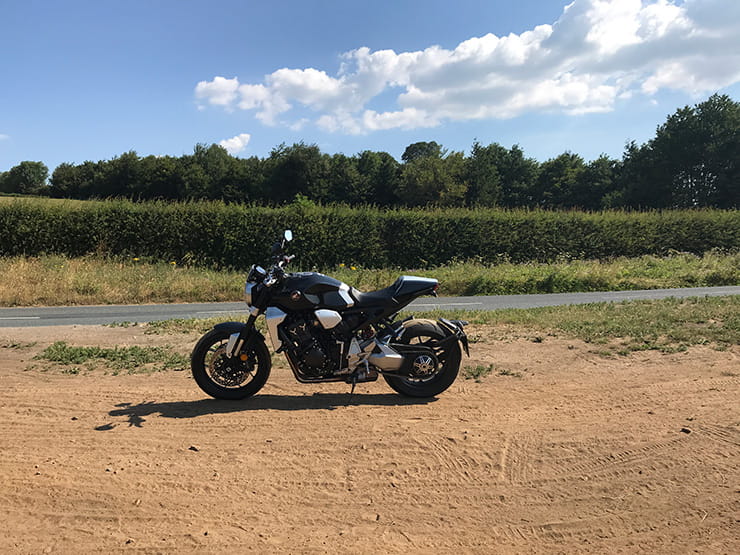 Four riding modes; Sport, Road, Rain and User. As usual, Sport sharpens the throttle and has least intrusive traction control and ABS settings. And then the bike gets more numb and less fun as you switch down the modes. Unlike Yamaha’s MT-10 where Sport is so sharp that away from a track it becomes annoying, on the Honda it’s probably the one you’ll settle on after your first week messing about and leave it there forever. The others are interesting to try, but make the bike feel considerably less enjoyable while offering no real benefit.

The disco on the rhs of the clocks is distracting and has different coloured lights to show which riding mode you are in, plus an additional eco function that glows green to tell you when you have closed the throttle. It’s hard to think of anything that would be more pointless, but thankfully, while trying to work out how to change riding modes you will probably accidentally switch it off anyway.

This + version comes with heated grips, the up and down quickshifter and a teeny flyscreen.

This + version costs £12,299 otr which is £1100 more than the standard bike. That’s £2000 more than Kawasaki’s Z1000, £800 more than Yamaha’s base model MT-10 or £949 more than a base-model Triumph Speed Triple. For this money you could also buy BMW’s R1200R with conventional suspension, a top box and heated grips. They are all very different bikes, delivering similar performance and handling in their own ways. Hard to say whether the Honda has enough of an advantage (if any) over the opposition to be worth the extra money and what you may view as an advantage, others might not be bothered about.

For what it’s worth, I’d buy the Honda from that crowd above because it’s the best all-round package, easiest to ride fast or slow, has the best gearchange with or without the quickshifter and the strongest brakes too. I prefer things like that to ‘character’ and the disco lights make me chuckle. The Honda feels smaller and easier to manage too and no one does smooth four-cylinder loveliness better than Honda.

I prefer the more conservative design of the CB too next to the ‘look-how-wacky-I-am’ styling of the Kawasaki and Yamaha in particular. The CB1000R strikes a good blend of old-fashioned ‘proper’ motorcycle with a modern twist that is neither retro nor too modern. 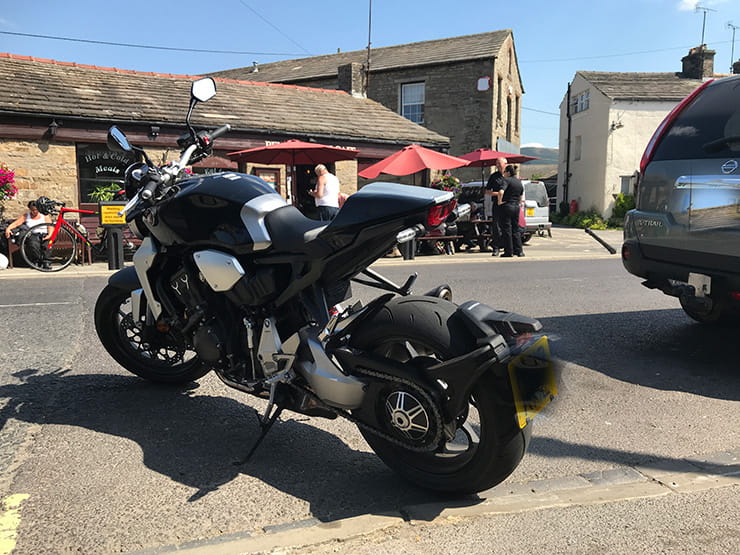 Three things I’m still to be convinced about