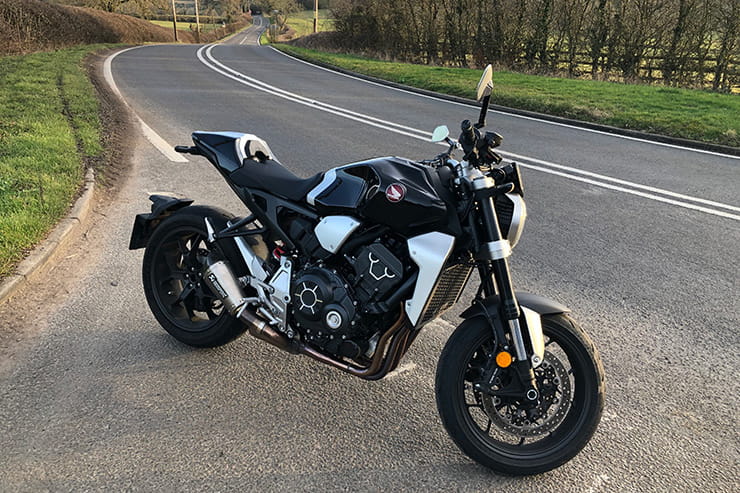 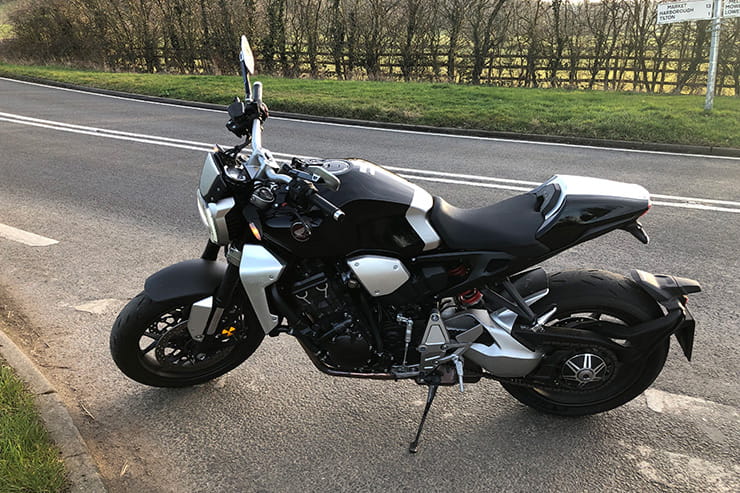 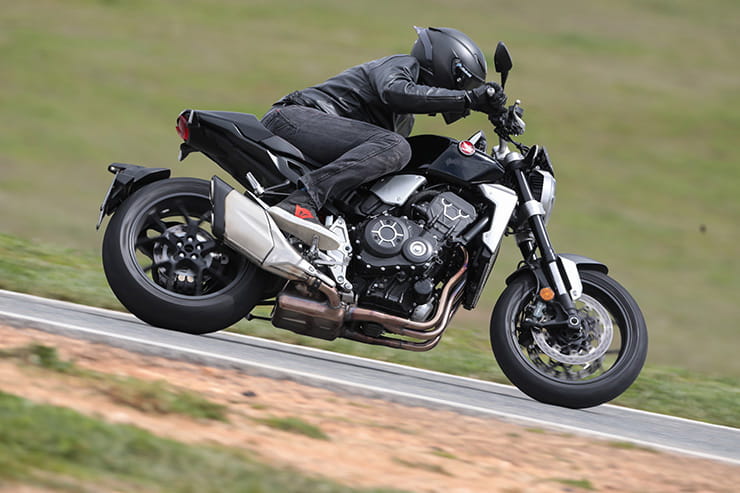 Honda’s 2018 CB1000R is a great example of so much of what’s wrong with UK motorcycling. It’s nothing to do with the bike, but more so the machismo and embarrassment of a customer base obsessed with irrelevant numbers. Talk to any rider who hasn’t ridden one and they’ll tell you how the CB1000R isn’t worth the premium price because it ‘only’ makes half a million horsepower. You’re better off buying the ‘insert one million bhp rival here’ because it’s faster, obviously. And so it goes on. The manufacturers, short of ideas to combat this simply give us bikes making every more power at ever-higher rpms that require ever-more-clever electronics to restrict them back to the amount of horsepower our abilities, road surfaces and brains can actually handle. Forgive me, I’ve said this before, but if we all bought jumpers in the same way we bought motorbikes, we’d spend Xmas with the family trussed up in six-armed monstrosities (‘I like to have the extra four just to get me out of trouble’) with two thirds of them safety-pinned to the sides to stop us getting them caught in the door.

Those of us who’ve ridden a 2018 Honda CB1000R have a different view. It’s so beautiful to ride that you wonder how we all managed to ignore the (very much cheaper) previous version so comprehensively. An almost perfect representation of everything Honda stands for, the CB is easy to use, capable of being brutally fast, understated, built like only Honda can and it grows on you the more you ride it. Oh, and after too many summers on lumpy fashionable V-twin supernakeds, it’s a joy to feel the seamless torque of a great four-cylinder motor again. Those half-million horsepowers are delivered easily, smoothly but with purpose when you mean it. There’s minimal electronic interference and apart from some weird disco lighting built into the dashboard, nothing to distract you from the simple pleasure of pointing it where you want to go and getting there pretty bloody quickly. 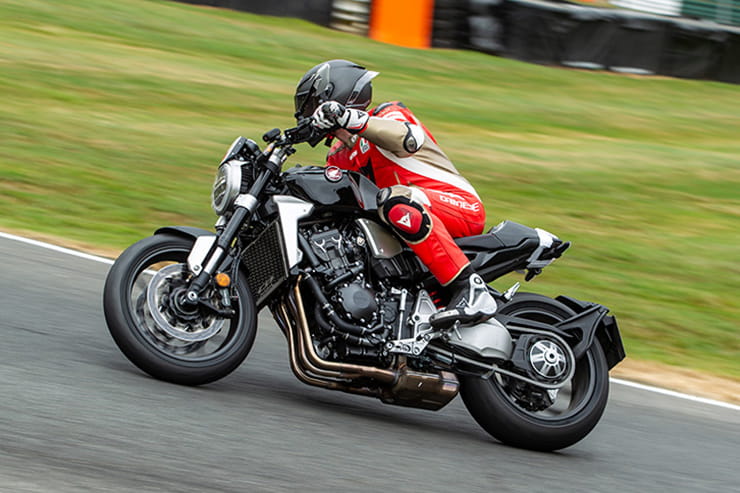 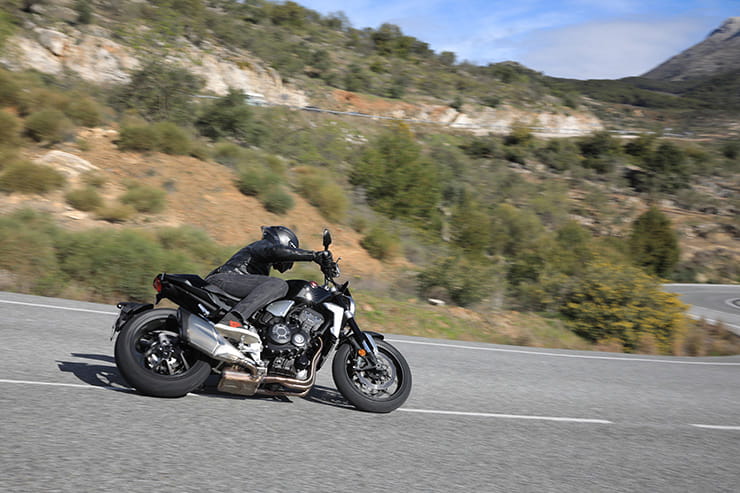 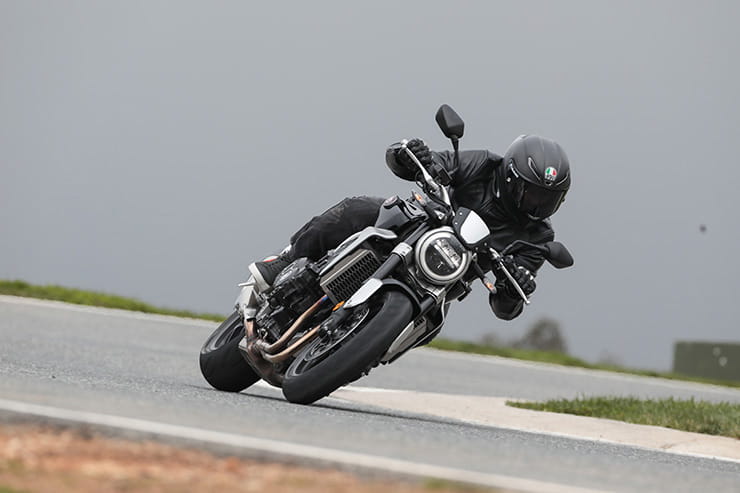 The CB1000R feels small for a 1000cc roadster. Compact and easy to manage with very soft suspension as standard. Too soft for my 13 stone bag of bones, but it took less than a morning to set it up and those settings were good enough for Michael to destroy a set of Michelin’s finest tyre edges on a track day without also destroying the CB’s extra-long hero-blobs on the footrests.

There are niggles. The price for one thing. This £12,599 CB1000R+ is an expensive bike next to Yamaha’s MT-09SP, which feels quicker and sharper to ride, has almost enough cylinders, looks nearly as cool and costs £3500 less. The Honda’s disco lights are funny for half an hour, but the dash is also lacking a little pizazz for the price. Hard to read in bright sunlight or when wet and less intuitive to scroll through the functions than a Honda ought to be. 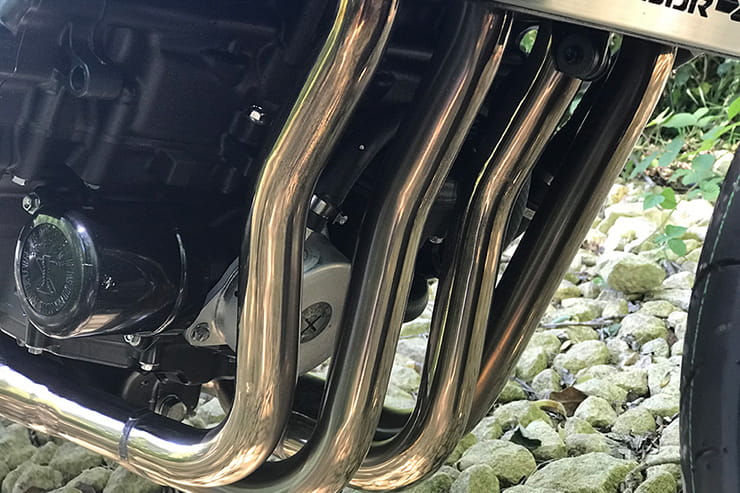 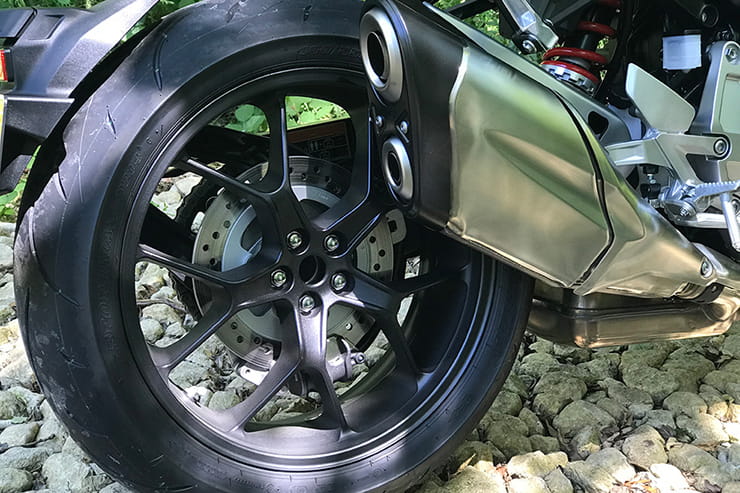 And then there’s the chain adjustment. It sounds trivial, but this is what would probably stop me buying one. Honda’s pro-Arm system has been setting the standard for simple, functional chain adjustment for the last thirty years. Loosen the pinch bolts, twist a single cam, tighten bolts – it normally takes a couple of minutes for perfect tension and guaranteed wheel alignment.

The CB1000R’s numberplate hanger spoils all of this because it bizarrely removes access to the pinch bolts. Which encourages us ageing bodgers to resort to the kind of ingenuity and mechanical creativity we haven’t used since that time in 1986 when we tried to hacksaw through a drive chain link instead of grinding off the link-pin.

It took me 25 minutes to adjust the CB’s chain and then, without a paddock stand I couldn’t lube it properly because there’s minimal access for the lube-tin’s nozzle. Rumour has it that once you’ve adjusted the CB’s chain successfully, you get a certificate allowing you to skip the first session of gynaecology school though, which is a bonus. 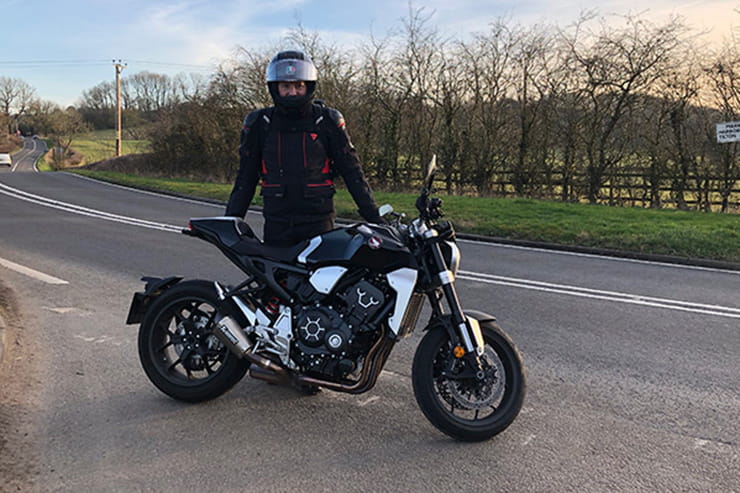 Above: in its natural habitat; Britain’s beautiful b-roads

A view from across the desk: Michael Mann, BikeSocial’s Web Editor

Alas, the time has come to say cheerio to one of my favourite ever bikes as she makes her return to Honda UK HQ. A marvellous seven months of excitable and bouncy good times. Was the novelty of its Labrador puppy-esque enthusiasm going to wear off? Maybe it would over time but I can categorically, hand-on-heart, swear on the bible (other religions are available) tell you that EVERY time I fired up the Honda I couldn’t wait to ride. Even on the 145-mile round trip to Coventry in minus 4-degrees. The CB’s standard fit heated grips worked overtime that day and even the Michelin Power RS tyres, which are not ideal for greasy, horrible conditions, were ok. Overall, it’s not missed a beat or had anything fall off over the 1800-miles covered since last July.

It’s a real rider’s bike. Treat it mean and it’ll keep you keen, on edge and wondering if you dare use every percent of the throttle movement available in the first three gears such is its ferocious amount of torque. I know, you wouldn’t think by just looking at it that the Honda can have your pants pulled down in a flash. Thanks to the revisions to torque and power delivery at the lower-to-mid rev range, it’s quicker than a Fireblade to 100mph, so they say. And I can quite believe it. Whereas a simple potter into or around town would have you believe it’s as mild-mannered as a Hamlet-smoking, slipper-wearing, whiskey-supping, Werther’s Original-sucking, snooker-watching grandfather lazing in his favourite wing-back chair on a Sunday afternoon.

The instant torque, throttle pick-up and lively quartet of singing cylinders, when coupled with the bike’s short wheelbase and excellent chassis give plenty of feedback making the rider feel so engaged with the machine. And it behaves on the edge of out-and-out hooliganism, where you’d expect to meet such madness and expense as a Tuono V4 1100, 1290 Super Duke or MT-10, making it a little more controllable and a little more manageable. Oh, and the noise from the Akrapovic slip-on is worth every penny if you fancy an upgrade. The rumble is crossed with a dull bark and it’s A1-mega in my world.

A couple of down sides to report though. While the non ‘+’ model is available in red or black, the 2018 + model we had was only available in black… and it shows the dirt instantly. For 2019, Honda added a Silver colour option to each in the range.

The aftermarket Rizoma mirrors are a hell of a lot better looking that the old-fashioned standard versions and while they are very effective when in position, they are a pain to adjust.

I’d be happy as a pig in muck if I had one of these in my garage. They’re versatile enough for a commute, Sunday blast, b-road hustle and track day. Don’t judge a book by its cover because the CB1000R+ is a wolf in sheep’s clothing. 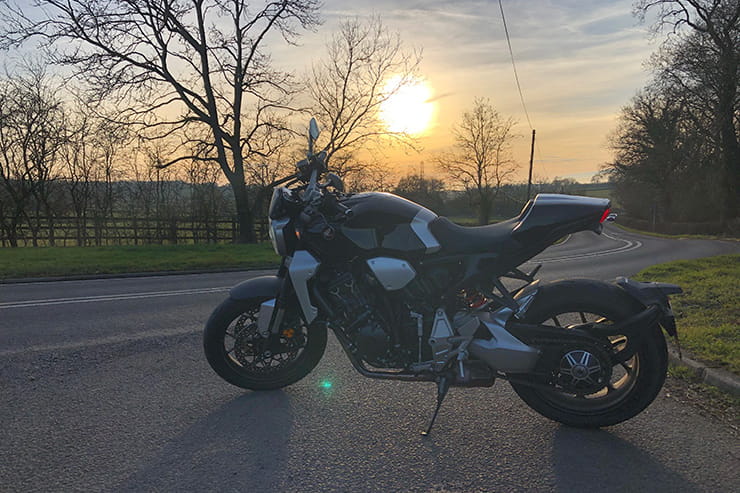