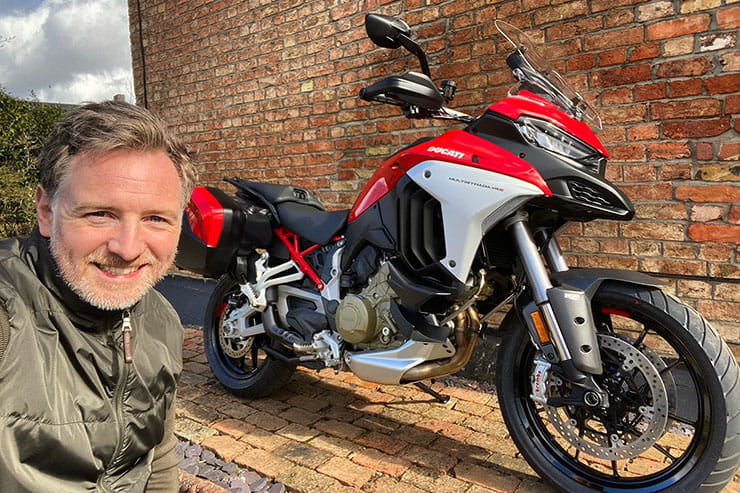 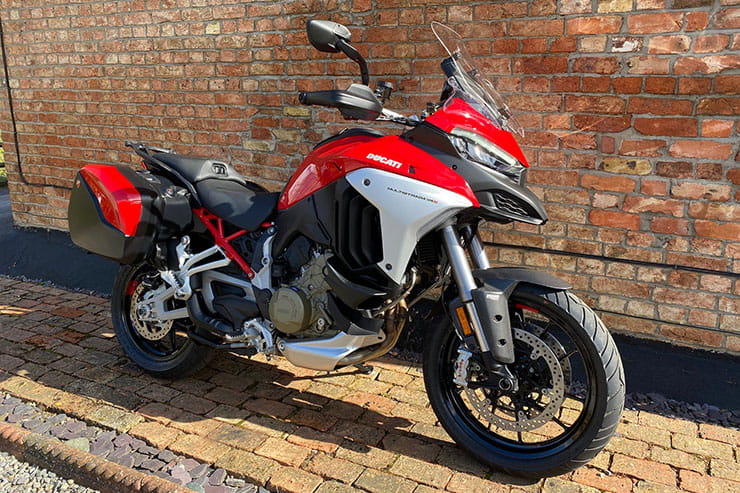 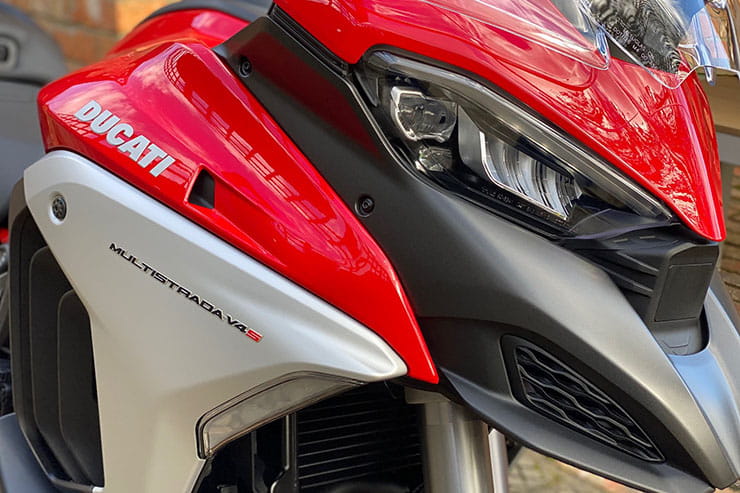 Following on from Simon’s rather epic review of the Multistrada V4, I’ve taken delivery of a 2021 Ducati Multistrada V4S with the ‘Full’ Trim which I’ll be running for the year and providing updates along the way.

‘Full’ means it has the additional panniers, centre stand, heated grips, heated seat, Adaptive Cruise Control (radar), Akrapovič silencer and carbon front mudguard. All of which is £3100 on top of the standard bike’s price of £18,395 giving a grand total of £21,495. A lot of dough but a lot of motorcycle.

It was delivered on 11th March with 455 ‘running-in’ miles on the clock. In the two months since, I’ve added a further 1800. Not with regular use but with a couple of longer rides and my here are my initial thoughts surrounding comfort, how easy it is to ride and use, plus power and economy.

Looking resplendent in that traditional Ducati red with matching panniers as it rolled out of the delivery van and onto my driveway (see above pics), I was chuffed it had finally arrived and probably more excited to ride it than any other production bike. Simon had ridden the bike over three months earlier and, as you’ve read, raved about it. Now I trust Simon’s words implicitly so there was little doubt my first ride on the MultiV4S would be one of life’s memorable moments.

I whipped the panniers off which with its new system is far easier than the older Multi’s – I even managed to chuck one up the road about ½ mile from my house several years back having not connected it properly, all too easily done – and while the 2021 bike’s ignition might be keyless, the pannier operation (just like the seat removal and fuel tank access) still requires the key. One day soon the key will be a long-lost memory, it can’t be that tricky to make it all accessible via a downloadable chip in your phone or a retina scanner, or whatever.

And there we were, ready for a quick 25-mile familiarisation B-road blast ahead of a 200-mile motorway journey before its first service back at Ducati UK’s HQ. Enough time to get comfortable with the new switchgear, rider modes, ergonomics and particularly, the Adaptive Cruise Control system, which is far, far easier to use and utterly mega than I’d imagined. Coincidentally, I also got to use the KTM version on a 1290 Super Adventure S UK press launch not long after, they’re both made by Bosch and are both highly effective, top-class rider enhancements. A coming update contains a 1200-mile, three-day journey where the system became my new fatigue-friend.

The power, noise and characteristics of the V4 is what I assumed would be among the more obvious treats to set it apart from anything else. I was wrong. Other than being just as startlingly quick from standing-still or rolling on the throttle, the Ducati is remarkably serene and composed – Honda-esque you might say. There’s pace but not panic from the engine, it’s all part of the complete touring package that at first had me a little miffed because I wanted it to startle me and be a little edgy, like a Streetfighter V4. It got me thinking about what this bike stands for, who’ll buy it and what their intentions are. It’s definitely more ‘fast tourer’ rather than ‘tall sportsbike’. In fact, you almost have to wait until you’re going too fast for the public roads to get a soupcon of sensory tickles from the V4 and Akrapovič combination.

Multistrada V4S on the dyno – update #2

Multistrada V4S on the dyno

As we know, the Multistrada V4 is powered by a big-bored version of the firm’s V4 engine as seen in the most recent, and uber-powerful, Panigale and Streetfighter ranges. The Desmosedici Stradale became the Granturismo and noticeably dropped the ‘desmo’ bit because this Ducati is the first non-Desmo valve gear engine from Ducati in 40 years.

There’s no top speed limiter in 6th gear which is why a lot of dyno runs on a modern-day bike are measured in 5th gear, or sometimes 4th for twin cylinder machines, because of the top gear speed limiter. When running the Multistrada V4S in 6th, we saw an indicated 174mph on the dashboard at 11,000rpm yet when the dyno runs its algorithms, the measured top engine speed is more accurately calculated at 152.8mph. 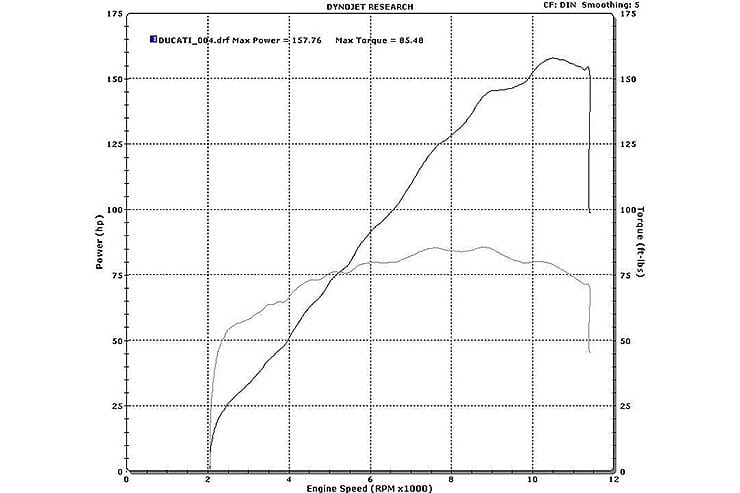 The reading shows a peak power figure of 157.76bhp and a peak torque figure of 85.48 lb ft which is healthier than the usual rough calculation of taking 10% off the crank figure.

There’s not plenty to shout about at the lower end of the revs which is why perhaps the bike has that demure feeling about it when plodding around town or when touring in a high gear but low speed. While it’s down a bit on bottom end grunt, the excitement begins about 5-6,000rpm and then when you’re rolling around between 7,000 - 9000rpm the Italian stallion gets all giddy.