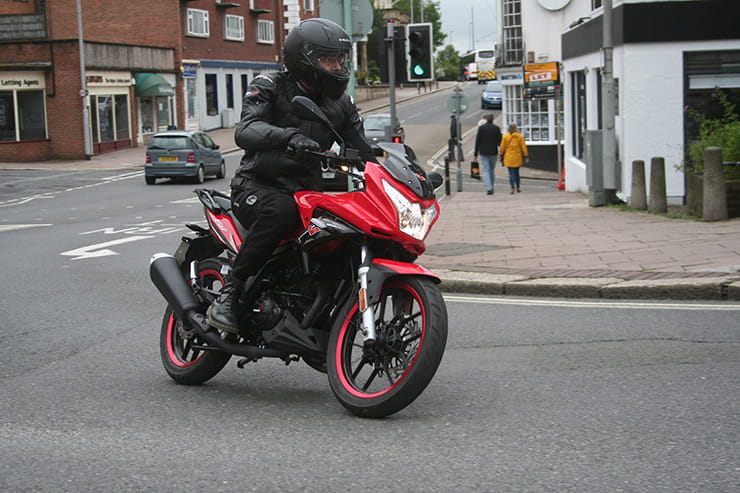 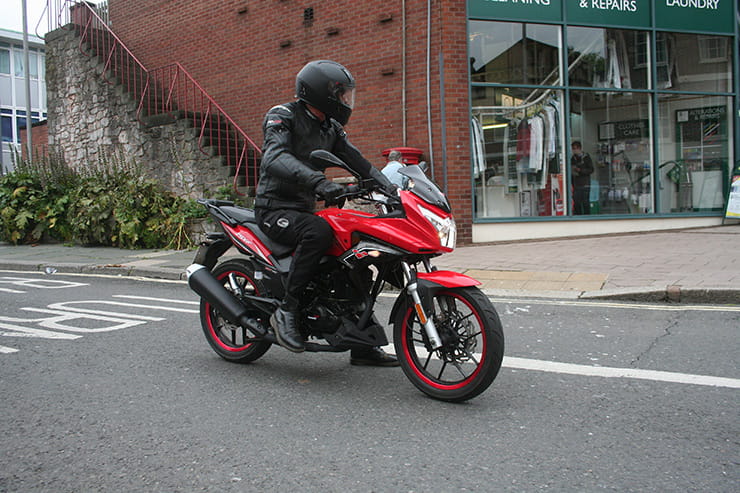 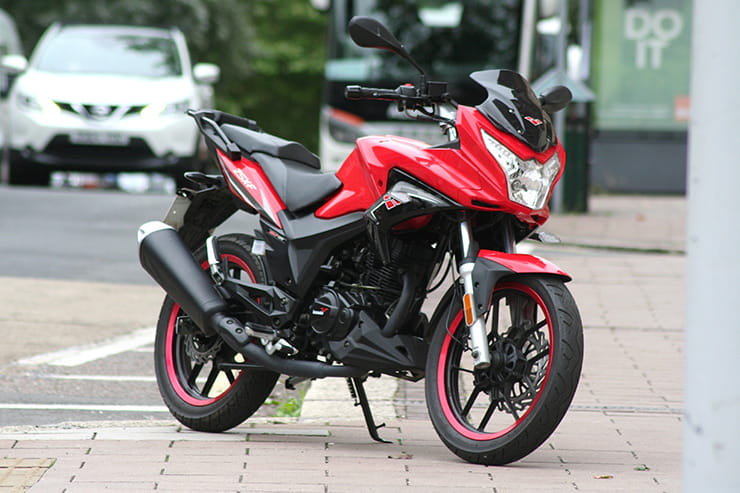 Fuel injection, linked brakes, half fairing – it sounds like a typical sports tourer, but this 125cc commuter bike has all of that, and costs less than £1700 on the road. Lexmoto is king in the 125cc market, and the ZSF-X is its mid-range commuter – not bargain basement (their cheapest 125 costs £400 less) but certainly good value. So, is it any good?

Lexmoto has always sold on price, piling Chinese 125s high and selling them cheaper than almost anyone else. At £1699.99, the ZSF-X excludes VED and the registration fee, but otherwise that's the on-the-road price.

10.5bhp at 8500rpm doesn't sound like a lot, especially when it's backed up by 6.9lb ft at 6000rpm, and it's true that the ZSF-X doesn't have the power of the more expensive 125s, but for a budget A1 class bike, it's bang on average. That translates into nippy performance on a bike that weighs only 143kg. It happily revs past the 8000rpm red line to a cut-out at 10,000, whipping up to an indicated 70-72mph on the digital speedo faster than you might think. It'll hold an indicated 65-70mph on the flat – that's probably 60-65mph in the real world, but fast enough to keep ahead of trucks on dual-carriageways. In town, it'll putter along at 20-25mph quite happily, but as with any lightweight 125 the Lexmoto's real strength is that it's so easy to filter past standing traffic – that's really what these small, slim bikes are built for. 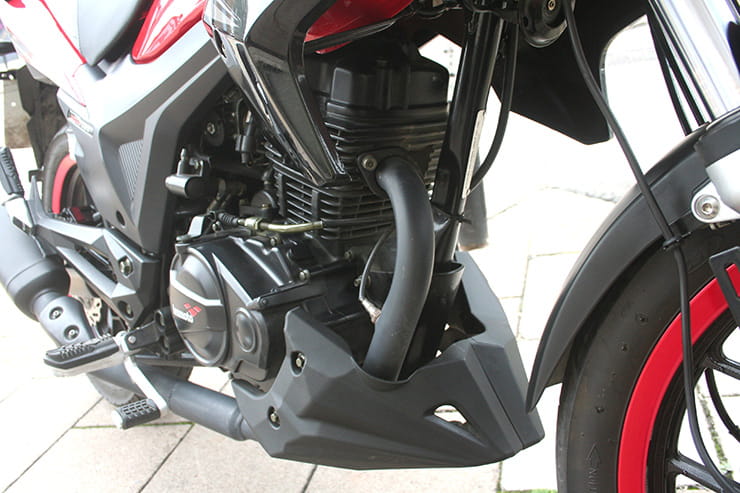 Not all 125s are the same, and the Lexmoto's sub-£2000 price means you get a relatively low-tech two-valve air-cooled single with a conventional 5-speed gearbox. But it's not all bargain basement spec – all A1 class bikes have fuel injection now and the Lexmoto's motor even has a balance shaft, while the exhaust system is in stainless steel. That's pretty good spec for such a well-priced bike.

Forget your fancy hybrid cars and their unlikely sounding economy figures – the most fuel-efficient petrol vehicles on the road are 125cc motorcycles like the ZSF-X. We didn't have time to test the Lexmoto's fuel consumption, but geared 125s typically return 90mpg or more, with over 100mpg possible. The Lexmoto has a big 18-litre tank – at 95mpg that's enough for 350 miles of commuting.

A monoshock rear end was part of Lexmoto's latest update for the ZSF-X, and like the forks it's a budget item. On the plus side, it is pre-load adjustable (though at this price you don't get adjustable forks) and the bike is well damped at both ends. It all feels quite together and secure on bends – the CST tyres hang on well (17-inch rims at both ends) and being a small light bike the Lexmoto is easy to steer. Knee down confidence? Maybe not, but it's safe, not to mention fun on a twisty road where the lack of ultimate power doesn't matter so much. 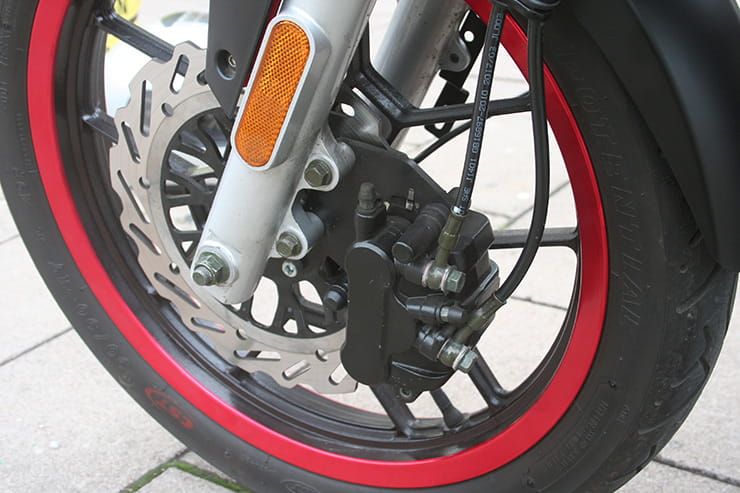 All A1 class bikes must offer either ABS or front/rear linked brakes. The Lexmoto's are linked, which partly explains why it was updated with a rear disc last year. They work in the usual way, the pedal working front and rear brakes together with the lever operating the front only. Very effective they are too, with nice front/rear balance and no signs of either end locking up early.

Is this relevant on a 125? Of course it is. A long commute into Brum or Manchester can take an hour or more, so comfort still matters on little bikes – some people even go touring on 125s. The ZSF-X has a nice neutral riding position and while the seat is a bit narrow, it's comfy enough, with the pillion portion acting as bum stop. It's also not too blowy at speed, thanks to that little fairing. 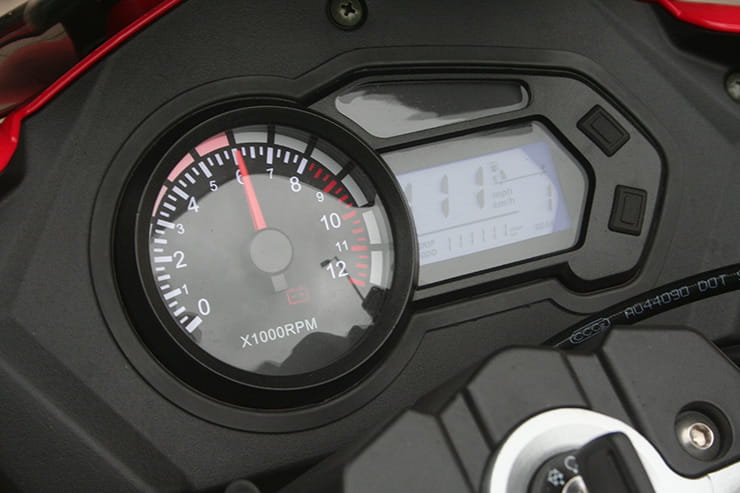 Umm, not many of these. The bike's dash is reasonably informative – digital speedo, fuel gauge, tripmeter and clock, plus an analogue rev counter whose segments light up as the needle scampers up the dial. There's also a luggage rack, so fitting a topbox will be easy.

You've got to hand it to Lexmoto – it really knows how to offer good value 125s which look attractive in the showroom and are practical day to day bikes. If money's really tight, Lexmoto's ZSB is £400 cheaper than the ZSF-X, otherwise this half-faired 125 looks like a good choice.

Three things I loved about the Lexmoto ZSF-X 125…