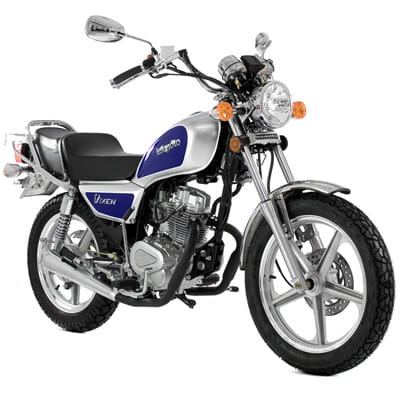 This may come as a surprise to some fellow motorcyclists, but not all custom bike fans/owners suddenly appear with the onset of a mid-life crisis. Many fans of custom-styled bikes start off in the same way as you or I, by wanting one on first sight.

Helping many more people achieve the dream of owning their first custom bike is Lexmoto and its Vixen 125. Come again, you might be saying? Lexmoto is a UK-based importer of Chinese-manufactured motorcycles and has built a strong reputation for supplying reliable bikes through a growing number of dealers.

The bike lends its styling to Japanese custom 125s from the early eighties and accounts for itself admirably. The air-cooled engine is probably derived from the same era. It is kind of cool to use the novel kickstart method instead of the starter button, but it does start every time of asking.

The engine is tight from zero mileage and gets better with use. Our test bike refused to hit 60mph to start with, but with mileage managed to hit 65mph. The downside is the poor little engine uses nearly all its available revs to get to this figure. If you’re looking for a relaxed engine speed then a smaller rear sprocket would drop the revs while the engine is more than capable of coping with the revised gearing.

As the engine gets used it loosens up to the point where you can actually hear the internals whirring away and feel minute rumblings inside. This apparently is a trait of old air-cooled engine design and isn’t a reason to worry.

Tall pull-back style handlebars and tall tyre profile lead to a light steering sensation from the front, which serves well in traffic. Not sure about attacking roundabouts in the wet though because the faster you go the less feel comes from the front end; it’s possible the tyre rubber isn’t particularly adept at being pushed hard.

But then the Vixen isn’t about performance. It’s a cheap entry-level learner machine aimed at lovers of all things chrome and show. When you base your opinion of the Vixen in this sense then it makes perfect sense when you’re 17.

Get 125 and cruiser insurance from Bennetts or compare Multi Bike policies.