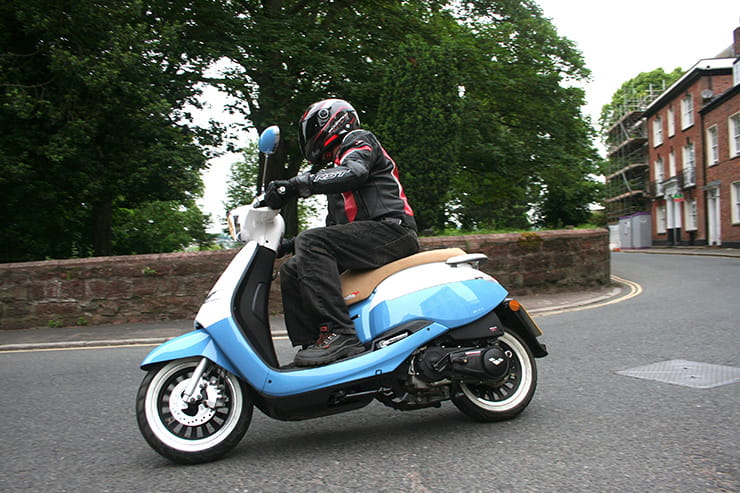 Lexmoto is the best-selling Chinese brand in the UK – they sell 125s by the hundreds. And the Valletta is one of their budget scooters, though it manages to keep up a cheerful appearance with its two-tone bodywork and splashes of chrome. Yes, it's yet another plastic bodied scooter with hints of Vespa, but it's still easy on the eye. As you'd expect, it's also lightweight, easy to ride and out of its depth on dual-carriageways, but is it more than a pretty face? 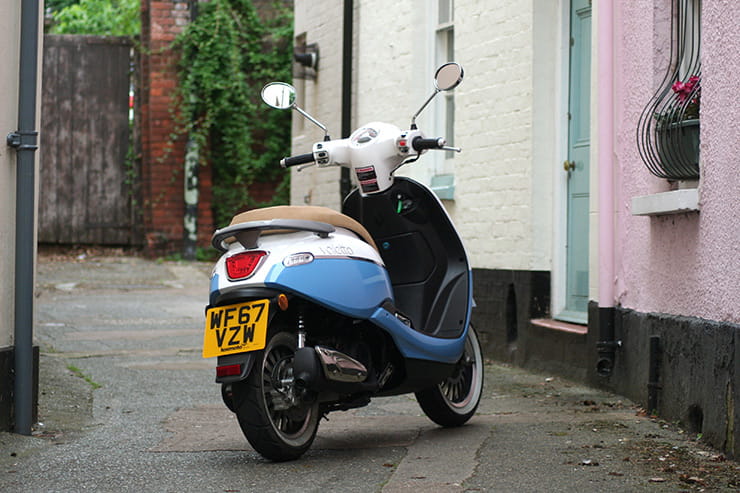 Last year, when A1 class 125s had to meet new Euro 4 standards, some said this was the end of the budget 125cc scooter. After all, they would have to be fitted with fuel injection and a linked braking system with discs at both ends which would surely add several hundred quid to the price. Against the odds, Lexmoto – best-selling Chinese brand in the UK – has managed to keep its prices lowish, and the Valletta comes in at £1500, which makes it one of the cheapest brand new 125 scooters on the market. 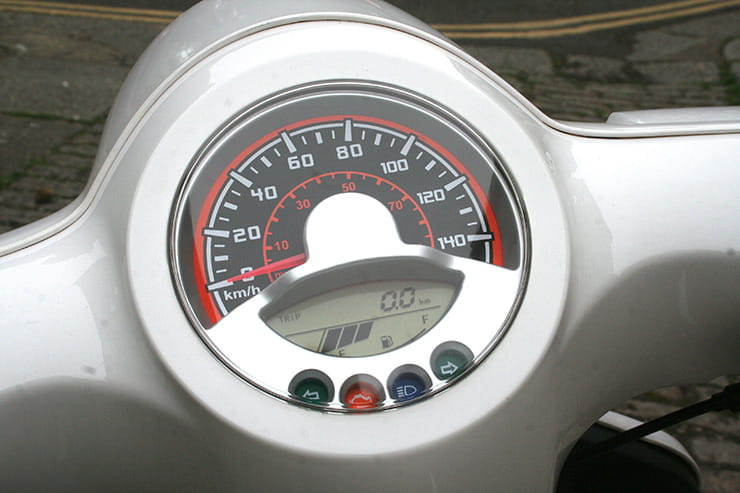 Even by 125 standards, the Valletta doesn't muster a lot of power and torque. With just 7bhp @ 7000rpm, it's one of the lowest powered 125s on the market, well short of the 14.6bhp limit for A1-class bikes and scooters. Torque is similarly modest, at 5.9lb ft at 6000rpm, and the fuel injection is there to cut emissions, not boost power.

This translates into reasonable acceleration up to 40mph, then slower progress up to an indicated 50-55. The motor feels quite unfazed to be ridden flat out, and it's fast enough for all urban roads up to 40 limits. Not a motorway machine though.

There are 125s around with four-valve heads and liquid-cooling, but at this price you don't get any of that. The Valletta's motor is a supremely simple two-valve air-cooled unit, the supply of cooling air fan-assisted as the engine is tucked away out of the air flow. Transmission is the bog-standard scooter arrangement of automatic CVT via belt drive and expanding pulleys. 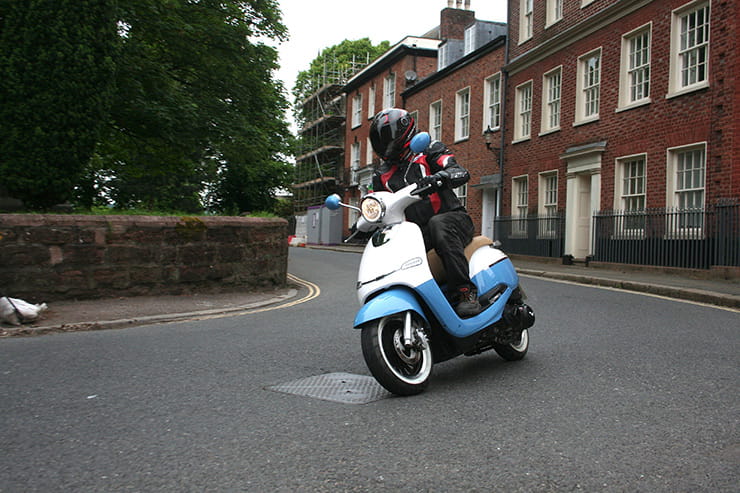 We didn't have time to do a full economy test, but 125cc scooters this light and low powered usually have no trouble averaging 90-100mpg, and Lexmoto quotes 93.5mpg for the Valletta. The tiny fuel tank holds just 5.5 litres, but at 90mpg that's enough for most commutes.

The Valletta is a featherweight 105kg, which isn't a lot even by 125 standards, so it's very easy and light to handle. This is just what you want for threading through gaps in the traffic, so full marks there. On a budget scooter, the suspension too will be built down to a price, but the front forks and single rear shock do a reasonable job of keeping everything under control. Small 12-inch tyres make it more sensitive to mid-corner bumps, but that goes with the territory of small wheels. The tyres themselves (whitewall Naiduns 'designed in Taiwan') grip well, at least in the dry. 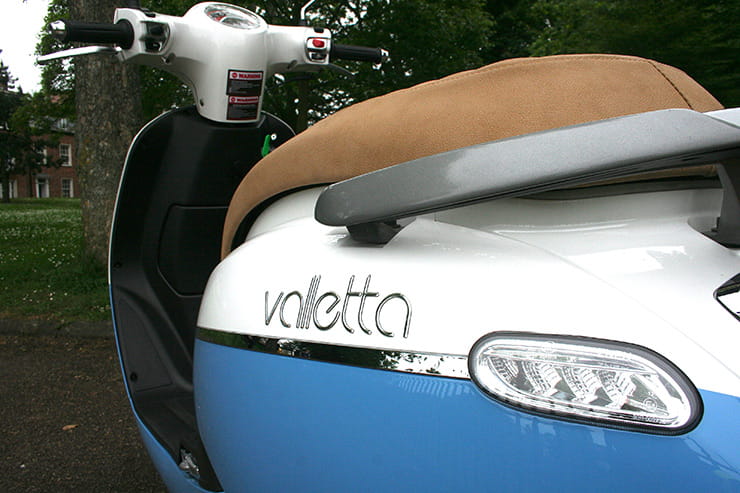 Linked brakes are part of the Euro 4 standards which all 125s have to comply with, so on the Valletta the left hand lever operates both front and rear discs, while the right-hand one does the front only. It's a good system which works well, with plenty of power using the linked lever only, though the rear would lock up quite easily on hard stops, even on dry tarmac. 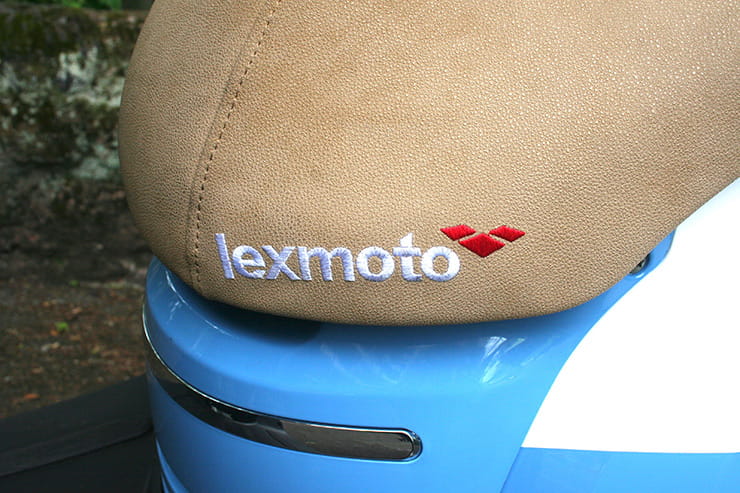 Comfort's not a huge issue on small scooters because they tend to get used for short commutes rather than touring -  I say 'tend' because somebody reading this has probably ridden their 125 to Nordkapp, and if you have, I salute you. But there's no getting away from the fact that the Valletta is small, with a low seat in relation to the footboard that even I (5' 6” with 30-inch legs) found slightly cramped. The seat itself is 800mm off the ground, higher than expected, but none of this is a problem on short trips. The seat is wide and pillions get proper fold-out pegs and a big grab rail. 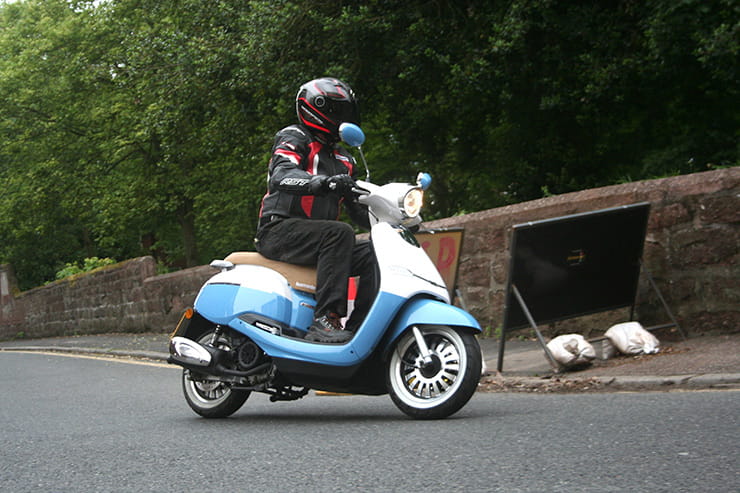 Sub-£1500 125cc scooters do not come with lavish equipment. The dash is basic, with a speedo (tiny mph figures, big km/h ones), fuel gauge and a few warning lights, but that's it. The usual underseat space is small (too small for my Schuberth flip-up) and there's a tiny lockable front cubby which could take a set of keys but not much else, though the traditional flat footboard will take a bag of shopping between your feet.  The ignition has a security cover, which is a bonus in these light-fingered times.

A lot of the Valletta's showroom appeal is in its styling. The Vespa clone look has been around a very long time now, but the Valletta's two-tone paintwork (blue/white or black/white) is very pretty and even extends to the mirror casings, set off by splashes of chrome, the light brown seat and alloy wheels. 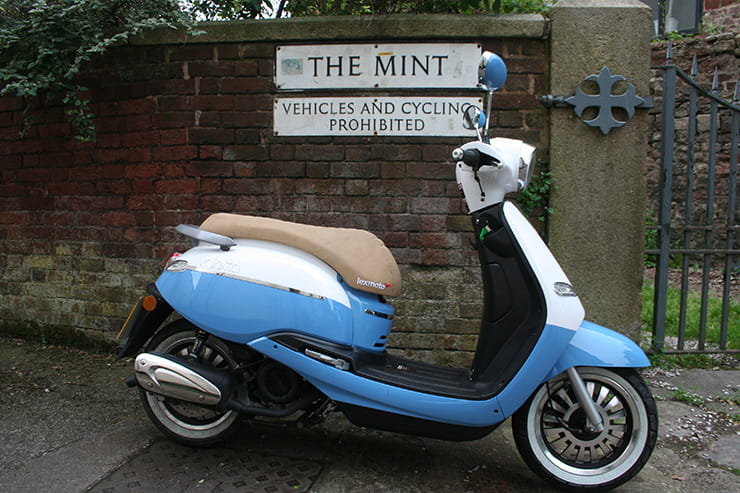 The Valletta does exactly the job it’s supposed to do. It looks pretty and is dead easy to ride through traffic. If the budget spec does show through in outright performance and limited equipment, the answer is – just look at the price.

Three things I loved about the Lexmoto Valletta…

• Runs out of breath on big roads