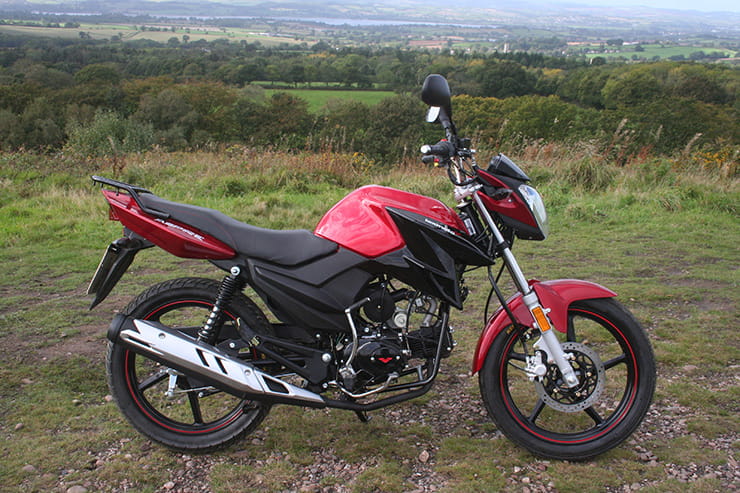 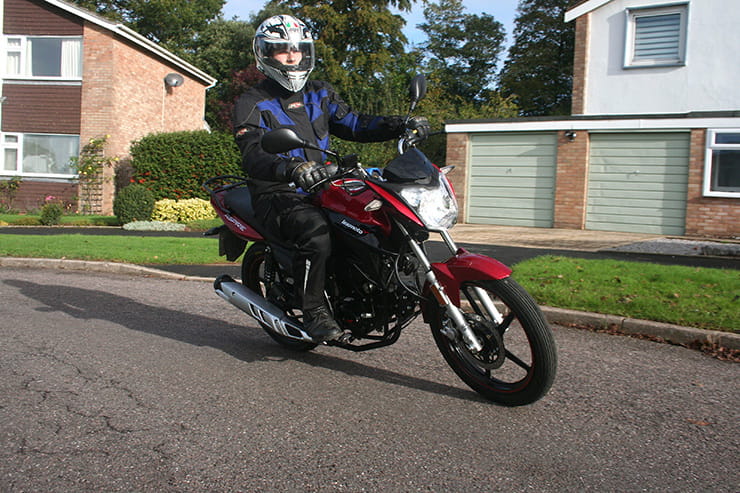 Twin shocks, a simple carb-fed air-cooled engine, four-speed box, rear drum brake and even a kickstart, all available on a brand-new motorcycle. It sounds like the ultimate retro bike, but the Lexmoto Aspire certainly isn't one of those – it retains the old tech to keep costs to a minimum, and because it's a moped.

We hear a lot about niche motorcycles these days, but they don't get much more niche than geared 50s, which occupy the slimmest slice of Britain's motorcycle market cake. If you don't like statistics, look away now, but last year mopeds (including 50cc scooters) made up just over 5% of all powered two-wheeler sales – back in the 1970s, the figure was 50%, but for all sorts of reasons, the moped share has plummeted, and within that subsector, scooters outsell geared bikes by four to one.

It's not hard to see why. Although fewer 16-year-olds than ever are taking to two wheels, scooters float their boat more than a traditional geared bike. Geared 50s are restricted to 28mph, just like the scooters, but they're slower off the line – having to change gear multiple times isn't as quick as just whacking open the grip on a twist 'n go. Result – in 2018 they made up a fulsome 1% of the total market.

Despite which, sales of 1000 or so a year are not to be ignored in these hard times, and there are several geared 50s to choose from. Bullitt has just jumped in with a 50cc version of its Hero but the market leader is Lexmoto, which has been king of the budget class for years, piling Chinese bikes high, selling them cheap, and selling plenty as a result.

The Aspire is a simple, straightforward 50cc motorcycle which promises to combine 125cc-sized presence with 50cc insurance rates and learner legality for sixteeners. 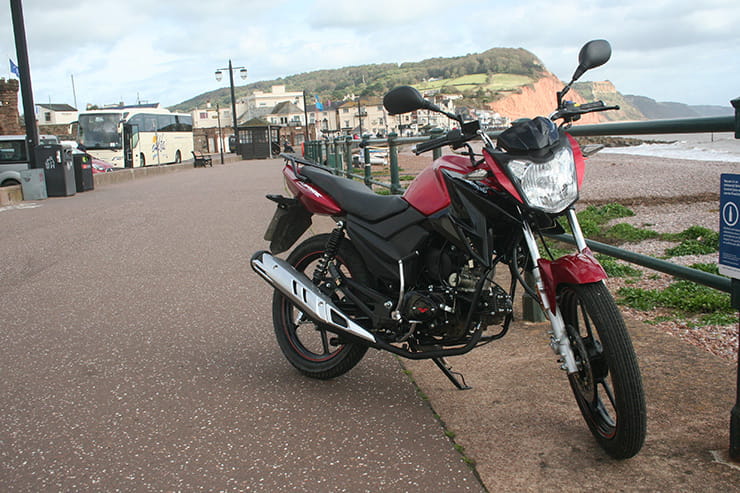 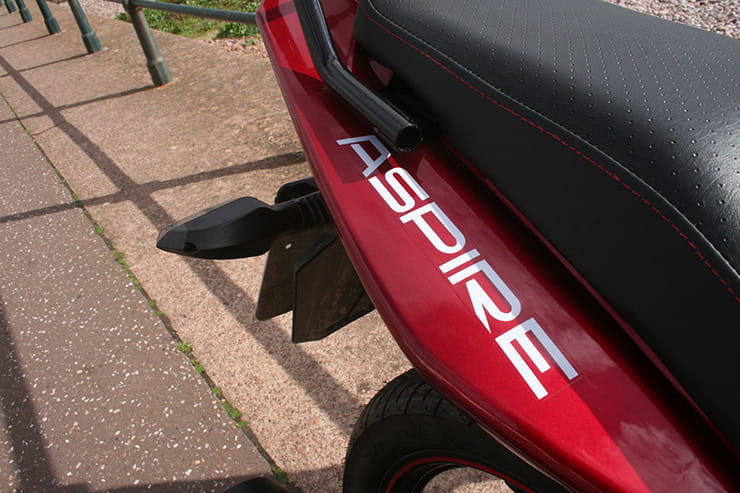 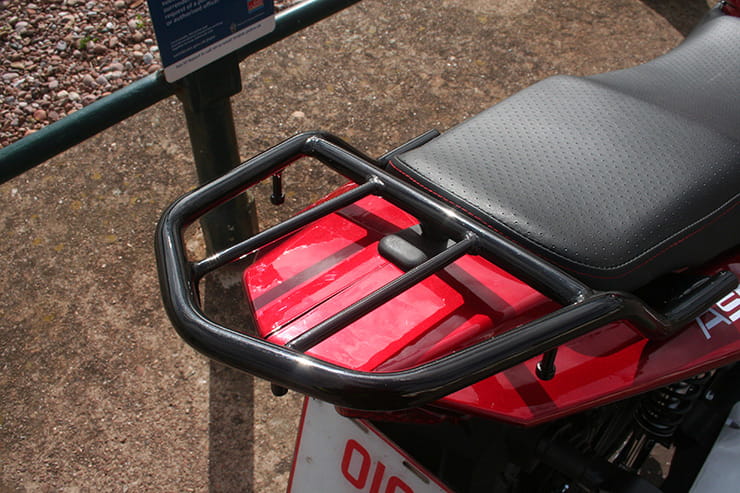 The Aspire costs £1249.99, which is on the road and includes a 12-month warranty with recovery. But it's not the cheapest geared 50 on sale – that's Lexmoto's own Hunter, which is £150 less and mechanically identical but with more traditional styling. The Aspire aspires (sorry, I just had to) to a slightly more modern look with its bigger headlight, extra panelling and sharper styling all round. It really does look quite chunky, more like a full-size 125 (if that's not a tautology) than any other moped. You might or might not think this makes it worth the extra money, but it's still a lot cheaper than any other geared 50 on the market.

The Aspire offers just 3bhp at 8500rpm and 1.9lb ft at 6500rpm, so it hasn't got a lot of power and torque to play with. Press the button and the engine putters quietly into life, promising mild-mannered performance, which it certainly delivers. To make this test more interesting, I headed off from Lexmoto's base along the hilly Devon coast to Sidmouth, probably not typical use for a geared 50.

Whatever the terrain – downhill excepted – the Aspire is painfully slow. Lexmoto have restricted it by changing the carburettor slide, so you effectively have only part throttle. First gear is short, but the bike is still very slow away from junctions, roundabouts and traffic lights, and for that reason alone I would derestrict it. This, incidentally, is very easy as a full-power carb slide costs just £9.99 from Lexmoto's own parts website – but do tell your insurer or you'll be riding without any sort of cover. You'll also have to be over sixteen.

Lexmoto had to restrict the Aspire to make it road legal as a moped, but the gearing is standard, which is a bit tall for the low power to cope with. Like all mopeds, the bike is out of its depth in 40 or 50 limits, and what speed there is drops right off on even modest hills – at one point I was crawling along a busy A road uphill at 22mph, which wasn't much fun. The upside of the high gearing is that the Aspire will wind up to an indicated 35-37mph on the flat. Point it downhill and 45-50mph is possible, which is very unmoped like but gives a certain sense of achievement.

Around town and on quieter roads the Aspire is more in its element – it'll trundle along at 15-20mph in top gear and is so quiet and unobtrusive that it failed to annoy the inhabitants of Sidmouth. Heading out of town, we were faced with a long steep hill of about 1:6. In first gear, at 10mph we made it, but only just. 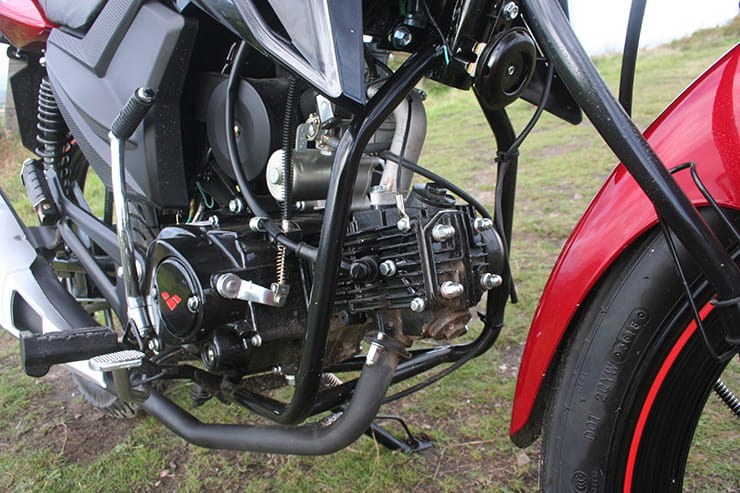 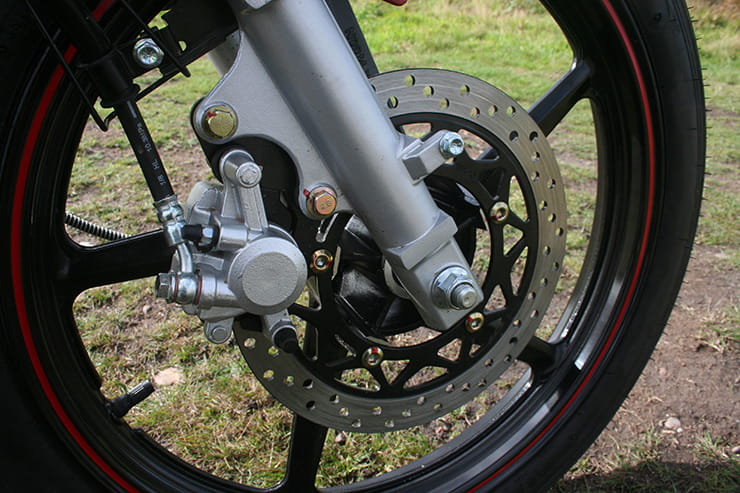 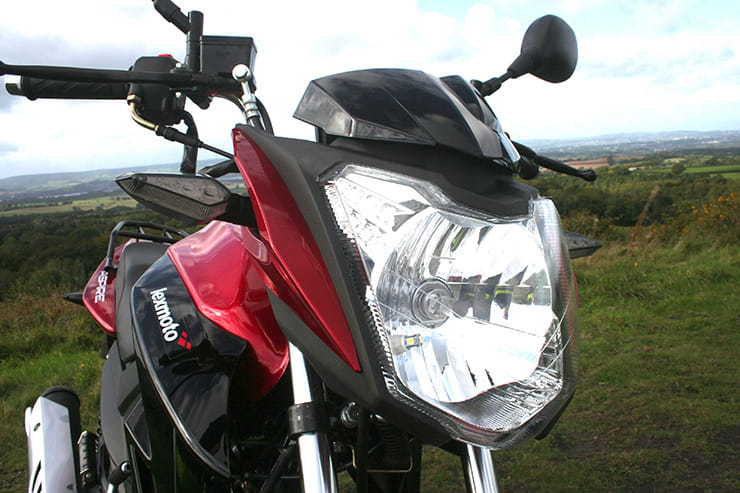 If the Aspire's engine looks vaguely familiar, that's because it's a distant descendant of Honda's step-through power unit, millions of which have been built over a half a century or so, in both clutchless and manual form. It's a supremely simple two-valve overhead cam single, quiet and smooth unless you coax the rev counter beyond the 8000rpm red line.

All mopeds have to comply with Euro 4 emissions leglisation now, but unlike bigger bikes they don't have to fit fuel injection. So, the Aspire still has a carb, albeit with electronic controls and a lambda sensor. To complete the retro spec, there's even a kickstart to supplement the usual button. It's unlikely engines this basic will be able to cope with Euro 5 (due 1st January 2021 for existing bikes) so if you want one, buy soon.

This is one of the very few new bikes available with a four-speed gearbox, and it works well enough, with a light clutch and foot change, though there are big gaps between the ratios. As for the exhaust, there's no stainless steel at this end of the market, but if you ever need a complete new system, it costs just £60.

Lexmoto claims 150mpg for the Aspire 50, and it's not that good, but hard-working mopeds often drink more fuel than a gently ridden 125. Topping up the tank after 41 miles, it took just 1.87 litres, which works out at 99.6mpg, about what I'd expect from a geared 50, though in easier terrain it might have given a bit more. Either way, around 100mpg still makes this one of the most frugal petrol/diesel vehicles you can buy – certainly a lot better than the massive SUV 'hybrid' sitting alongside you at the lights.

The tank is a decent size, taking 12 litres, which is big enough for a theoretical range of 250 miles. It's unlikely the average Aspire rider will want to ride that far without stopping, but it could mean a month's-worth of commuting without even thinking about filling up. The only tricky bit would be remembering to do it...

The Aspire weighs just 96kg, only a few kilos more than the little Diablo scooter, so it's very easy and unintimidating to handle, aided by a seat height of 785mm and a decently tight steering lock, all of which is just what you want around town.

It's the same story around the twisty bits, as the Aspire feels and handles very like a typical 125. The Kenda tyres are on the skinny side, but they hang on well enough, while wide-ish bars make the bike easy to tip into corners. The forks might be non-adjustable, but they work fine, as do the twin rear shocks, which have five pre-load steps. Eighteen-inch wheels make it more stable than a small-wheeled scooter and it's nice to know is that if you do decide to derestrict it, the chassis will be able to keep up. 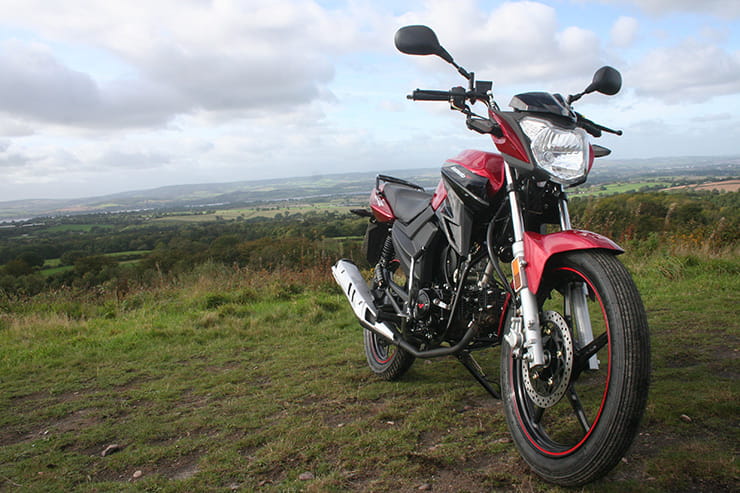 Remember drum brakes? The Aspire has a cable-operated rear drum and simple front disc with two-pot caliper, and they work far better than you might expect. Mopeds have a less onerous version of Euro 4 standards, and don't have to have linked brakes, let alone ABS, so welcome to a braking system circa 1975. The surprise is, they work really well. The disc has plenty of power and the rear drum is smooth and progressive, so all good.

Good news if you're longer in the leg or body, because the Aspire has more rider room than the average 50cc moped. As mentioned earlier, it feels like a full-size 125, with an upright riding position and fairly wide bars. Long distance comfort isn't relevant to mopeds, but the Aspire has a decent seat and with a relaxed position that makes it comfy over 20-30 miles.

This complete bike costs less than a typical BMW or Harley option pack, so it doesn't have a lot of goodies. There is a big analogue rev counter and digital speedo/fuel gauge (but no clock) and the switchgear is nice, chunky standard stuff which works well. You also get a small rear rack as part of the deal, which makes it easy to fit a cheap topbox – Lexmoto's accessories offshoot Lextek offers one for less than £25.

Security features are limited to a standard steering lock, so all the usual advice about an additional visible deterrent applies.

The Aspire has showroom presence, no doubt about that. Unless you know your ex-Honda engines, it could easily be taken for a 125. It's also roomy, comfy, with decent brakes and handling. But the feeble standard performance doesn't cope well with frenetic traffic or hilly terrain. If you really must have a geared 50 – derestrict it and tell your insurer. Otherwise, Lexmoto's cheapest 125 costs just £50 more.

Three things I loved about the 2019 Lexmoto Aspire 50… 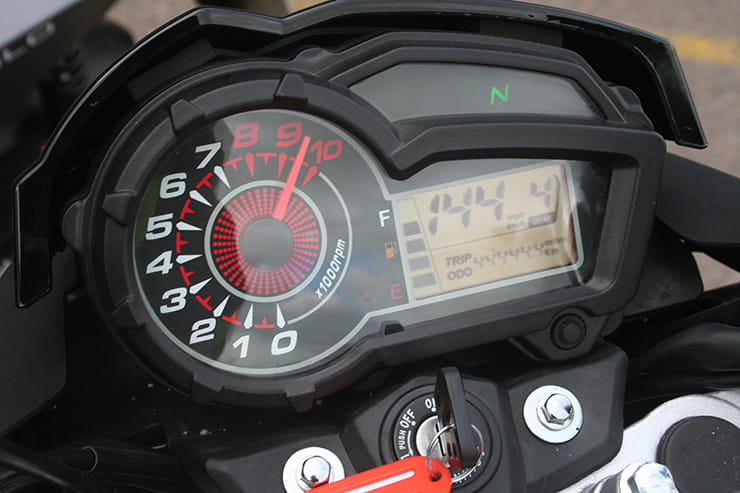