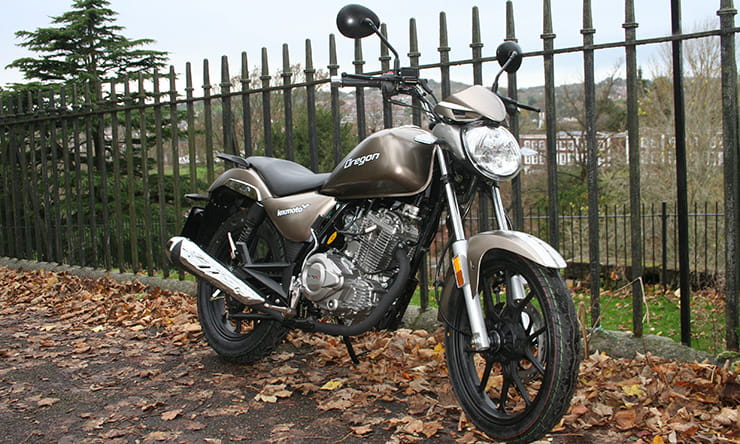 If you want to buy a simple, basic 125cc motorcycle, then act fast. As safety and emissions laws continue to tighten, the days of carburettors and unlinked brakes are probably numbered. One-two-fives aren't included in the compulsory ABS legislation which comes into force this year, but if they don't have anti-lock must have a combined (linked) braking system. Similarly with fuelling – while fuel injection has become almost universal among bigger bikes, budget 125s have got away with cheaper carburettors, but tougher emissions laws means even they too will have to adopt injection, probably later this year.

In the meantime, it is still possible to buy a basic 125 with carb-fed air-cooled motor, manual choke and 'traditional' brakes for not much more than the cost of a week in a spa hotel. Lexmoto's Oregon is a perfect example, though it's not at the bottom of their huge range of 125s, which kicks off with the Arrow, which owes much to Honda's venerable CG125 and costs less than £850.

Spend more than a grand on the Oregon, and you get a bit more jam – the bike has an overhead cam engine with balance shaft, and is styled to suggest cruiser with a hint of Diavel. Black alloy wheels, black pipe and minimal chrome reinforce that first impression. A skinny rear tyre gives the game away, but while white racing stripes and metallic beige might sound like a colour combo from hell, the whole ensemble works really well.

It might not walk the walk of a genuine Ducati power cruiser, but the Oregon does have a similarly low seat which enabled me (30-inch leg) to get both feet flat on the ground. You sit back in a comfy, undemanding riding position, able to look around and spot the school run Peugeot or boy racer Seat about to pull out in front of you. The SOHC engine, which Lexmoto likes to point out has Honda origins, fires up readily and is very flexible on the move, enabling the Oregon to trickle through town at 20mph in fifth before pulling away smoothly (admittedly not very fast). Use the gears, and it will keep up with urban traffic, though like most geared 125s, it's not as quick as a good scooter up to 30mph or so. Still, it's quite perky up to an indicated 45-50mph then winds up more gradually until there's 65-70 showing on the speedo – probably 60mph in the real world, but fast enough for dual carriageways.

The Oregon handles well on its basic non-adjustable forks and pre-load adjustable shocks, and in fact it's got the same chassis as the very different looking Assault, also from Lexmoto, which shows what a bit of styling and plastic work can do. Like the Assault, the Oregon's front disc is pretty good, (though the rear drum isn't so hot) and the Chen Shing tyres hold on well.

Chinese bike quality has improved a lot in the last few years, and the Oregon underlines that with decent quality switchgear, and overall finish, just betraysing its budget origins with the steering lock on the headstock and a non-removable seat, while the mirrors blur over 50mph and the fuel gauge readout changes up or down hill. Still, there's room for a pillion and you do get a rev counter, luggage rack,  LED indicators and running lights as part of the package.

All right, it's not a Diavel, but the Oregon does do the job of a cheap 125 with a bit of added pizzazz. And this time next year it'll probably have linked brakes, injection and cost more than the current price tag of £1100. 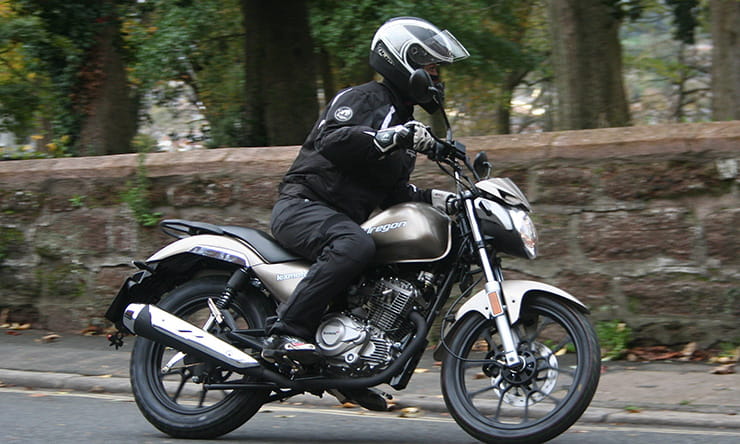