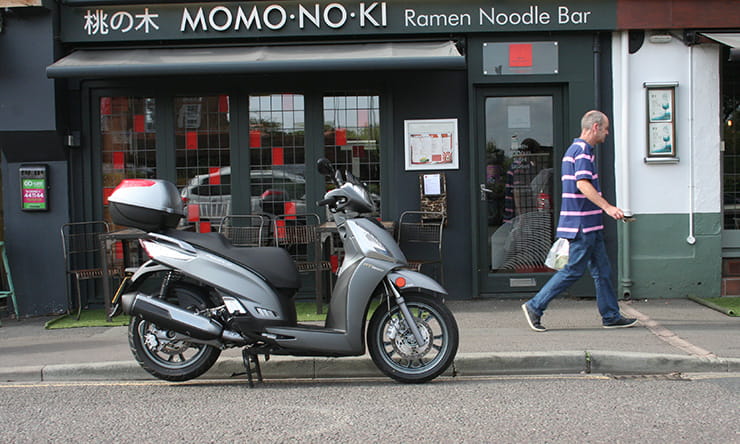 Two scooters dominate the 300cc class in Britain, and they couldn't be more different. The Vespa GTS300 is the best seller, doing especially well with scooterists who still like to criss-cross the country to rallies, but find that their 50-year-old Vespa PX or Lambretta isn't up to motorways any more. It's becoming a bit of cult scoot in its own right, combining that unmistakeable Vespa profile with a modern twist 'n go transmission, plus the ability to sit at 70-75mph in the outside lane.

Honda's SH300 is the other big player, and it couldn't be more different, a big-wheel scooter that makes no pretence to be anything more than what it is -  a convenient transport tool. Judging by the letters pages of at least one bike magazine, it's the scooter of choice for older riders who don't want the weight of a big bike, but aren't ready for a 125 just yet.

Well now they've both got some competition, or rather the Honda has, because Kymco's latest People 300i is aimed fair and square at the SH. Like the Honda, it's classed as a big-wheel scooter, with 16-inch rims front and rear. Also like the Honda it's powered by a liquid-cooled single (299cc in this case) driving through the usual auto transmission. The People is already to Euro 4 spec, which brings standard ABS and on-board diagnostics. At £3999+OTR, it's a whopping £700 cheaper than the Honda, though it lacks some features the SH has as standard, including traction control, keyless ignition and enough underseat space to take a full-face lid. Is it good enough to tempt SH owners to abandon the Honda badge?

The short answer, to save those of you who are tempted to skip to the end for the verdict is, yes, it certainly has the dynamics. Kymco makes engines for all sorts of people, including BMW's maxi-scooters and the G450X off-road, so it knows a bit about power units. Not surprisingly, the 299cc single is smooth (apart from a few vibes at low revs) and powerful, claiming 27.5bhp at 7500rpm and a meaty 30 lb ft. That's quite a bit, and without traction control, acceleration away from the lights would need care on a wet and greasy city morning.

But the rest of the time, that doesn't matter, because the power and torque (the SH actually claims slightly more) deliver very good performance. Acceleration is strong from a standing start, and the People gets a sort of second wind at 35-40mph, when it takes off. Physically bigger than some 125s, it's still small enough to easily filter past traffic and feels well balanced at low speeds. The broad seat is comfy, but quite high at 810mm, enough to put off shorter-legged riders.

All this (seat height apart) makes city riding easy  – you can get safely away from the lights while cars are fumbling with their first gearchange – but the extra performance really comes into its own on the open road, especially for overtaking. Give it a handful at 50mph, and the People surges forward, on up to the legal limit. Beyond 70mph acceleration does slow but speed goes on building to an indicated 90mph.

You might never choose to use all this outside lane urge, but the real point is that the Kymco has plenty of go in hand in the 50-70mph range. A good 125 scooter will get to 70 too, but it'll take a lot longer, and overtaking can often be out of the question. The People 300 never needs to catch its breath.

Mind you, out on the motorway it is a bit blowy at the legal limit, thanks to the upright riding position and fairly short screen, though a taller Givi screen is optional. And lower body protection is very good, thanks to the wide apron. It's not as big as a long wheelbase scooter, but the People still has room for two, with proper fold-out pegs for the pillion.

It's also stable at speed and not upset when breaking through HGV bow waves, something that can small-wheel scooters a-wobbling. Big-wheel scoots also tend to go round corners better than the small-wheel ones, and the People is no exception. The Taiwanese Maxxis tyres cling on well and the bigger 16-inch wheels make the whole thing more stable and less vulnerable to mid-corner bumps and manhole covers. That's backed up by excellent brakes – they're not linked, but the ABS discs front and rear are easily powerful enough to cope with the performance.

If there's a downside to big wheels, it's that they can compromise luggage room. Under the seat, scooter design has to be a lesson in priorities, with wheels, suspension movement, engine, transmission and luggage room all fighting for space. In the People's case, luggage loses out, and there's just a small tray under the seat, where the Honda SH provides a proper helmet-sized bin. That's why the Kymco gets a standard topbox – it's not huge, but is big enough for a full-face lid. You also get a tiny front cubby, and bag hook, so shopping can be rested on the flat floor between your feet.

That apart, the detailing is good, with big clear mirrors and decent switchgear. The dash is a lesson in simplicity, just a big analogue speedo with digital fuel and temp gauges. It's not flash, but it does the job. And really, that sums up the People – it's not a lifestyle choice, just an efficient, conservative scooter that will get through traffic more quickly than you might expect. 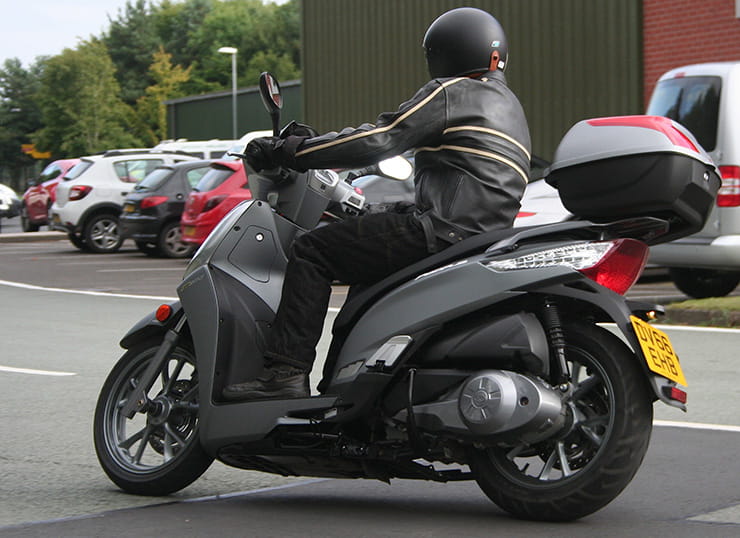