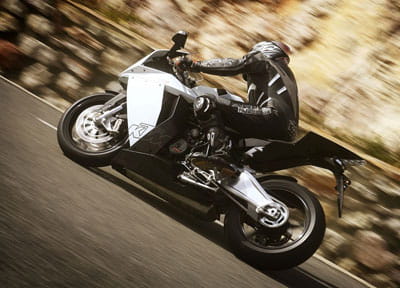 KTM is better known for its off-road bikes and the Adventure series of bikes that ably go from mud to tarmac like a Land Rover. So when the KTM finally showed up with the sporting RC8 it made a big impression – mostly from people who thought it was an ugly design exercise. But to many, the RC8’s acute angular styling was a breath of fresh air and still is.

As a superbike the RC8 doesn’t let itself down. The liquid-cooled 75° V-twin has an immense 150bhp kick with a decent knee in the crotch-like 88.5ft lbs of torque, most of which is delivered from 1700rpm and peaks at 8000rpm. Believe us when we say that’s a good healthy spread. Early models are prone to a hesitant throttle action when opening up from a neutral throttle. Not a problem as such but can be annoying when crawling along in traffic. There were also cases where some bikes had a new gear select mechanism installed to improve stiff and non-happening cog swaps.

The seat and overall riding position looks uncomfortable but it’s deceptive. If raised on sports bikes the RC8 will actually prove to be a blessing because every area of the bike is adjustable. Footpeg position, gear and brake lever tips, rear subframe height and more can be tweaked for comfort and size of rider – this is what spurred mainstream manufacturers to adopt similar standard adjustments.

WP suspension adorns front and rear of the RC8 and is quality kit. There’s more range of adjustment than you get at a gentleman’s outfitter. Needless to say, when it’s all dialled in to your personal satisfaction, the RC8 rocks til the flag drops or the bike meet is in sight. The RC8 is also one of the few bikes that gives WSB levels of feedback and stability when it’s on its ear – the later RC8R takes these two marks to yet another level.

The only possible reasons the RC8 didn’t sell better than it did is its looks, or the fact Ducati responded with the 1098. And although in the books of some folk the RC8 is a better performer than the Ducati, the Italian marque has a greater road and sport-related pedigree.

- points – apart from the jerky throttle response, not much at all