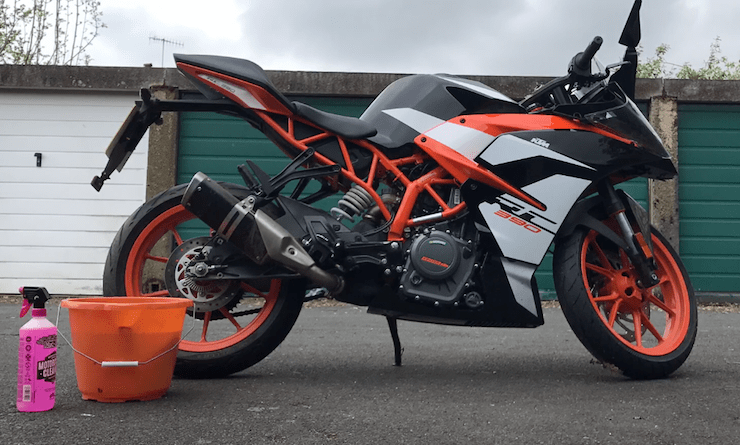 The new KTM RC 390 gets sharper brakes, a revised exhaust system and ride-by-wire technology for 2017. There’s also a new seat, bellypan and adjustable levers to play with. Here’s how we’ve got on so far:

I'm not the tallest, well that's a lie I'm all of 5ft4. So when I set eyes on the bike I was a bit conscious about how high the rear of the bike shapes upwards. I initially thought the bike would be too tall for me and I would have a nightmare stopping and starting on it.

I really didn't need to worry. Once I swung a leg over the bike and got comfy on it even my little legs could comfortably touch the floor. It's just the design of the bike that makes it look tall but I'm having no issues with it.

2. It looks the part

The RC390 is by far the smallest and cheapest bike currently on the BikeSocial fleet, but it hasn't been short of admirers. When it rolled off the van at BikeSocial HQ the team couldn't help but point out and commend certain features. They were impressed by how much bike you get for your £5,099 and so was I when they eventually let me have a sit on it.

It's been a similar scenario when I've taken it down to my local bike meet to. The pub is notorious for classic bikes so when I showed up on my two week old KTM I initially got some odd looks.

But they were equally impressed with the engineering and stylish touches to the bike. One chap even pointed out the way KTM had used orange cable ties around the frame. It was something I hadn't even noticed before but now I can't un-see it.

Riding this bike has taken me back to the enjoyment I used to get out of riding two strokes when I started out riding. And that's by know means saying this bike is just for youngsters or learners, it's not. It's the perfect bike for a rider who's looking for something they can ride hard on the road without having to worry about busting the speed limit in first gear.

I often find riding larger bikes you get lazy and loose that fun of eking every last rev out of a bike on your daily commute. With the RC390 you have to keep it singing in every gear to get the most out of it. And it's this characteristic that has genuinely made my ride outs so much more rewarding and enjoyable.

Even if you don’t use it, it’s reassuring to know you have a powerful bike under you. With this in mind, I was slightly apprehensive that I would struggle with the odd overtake on the RC390, but it’s really not been a problem. It picks up quick enough to overtake comfortably on national speed limit roads and feels more than stable at high speeds.

I’ve even gone out for a few rides with friends on larger bikes and its comfortably kept up, if anything it’s kept them on their toes around the corners.

KTM have installed some neat LED lights around the controls on the handlebars. It's a tiny touch but helps out a lot when riding at night and it just reinforces how much bike you get for what is essentially one of KTMs entry models.

The tail unit is another prime example of this and you can tell how much care KTM have taken into incorporating the rear light seamlessly into it. Unfortunately, this does leave slightly less room for storage as a result, but there is enough room for a small disc lock under the seat.

Being a huge fan of bike racing there's one other sweet touch I have to mention. When you turn on the bike you get a dash message saying "READY TO RACE." Whether you’re only riding to work or down the shops it's a nice reminder of KTMs heritage every time you start the bike. It confirms that you're riding a KTM that's had a lot of research and time put into it from various racing championships and therefore a bike that can handle a fair bit of punishment… which is proving the case so far.

We're riding down to the Goodwood Festival of Speed on the KTM this week and then off on a 390 mile trip down and around the Isle of Wight to see how the bike shapes up on longer rides.