2020 KTM Enduro range on test in Spain – and there’s a surprising new bike! 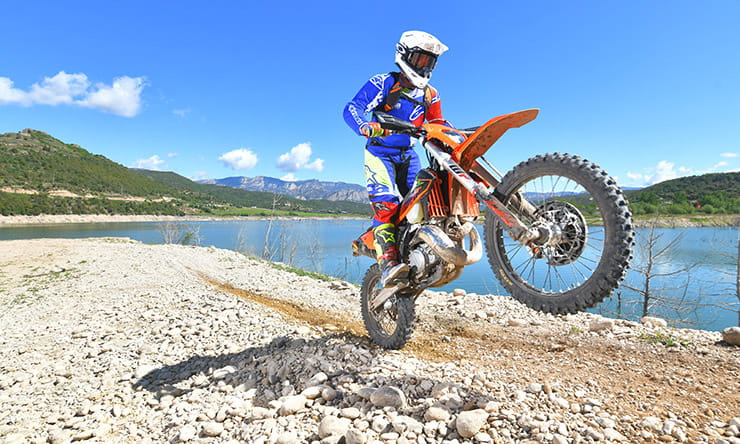 KTM’s range receives a significant upgrade for 2020 and there’s a new fuel-injected two-stroke 150EXC which joins the exciting line-up, along with a limited edition Erzbergrodeo 300 EXC TPI.

The Basella off-road park in northern Spain, at the foothill of the Pyrenees mountains just short of Andorra, was the perfect venue. KTM Factory team riders Johnny Walker and Taddy Blazusiak were on hand, as well as WP technicians and KTM staff. With seven new models to test, from KTM’s novice-friendly all-new 150EXC TPI two-stroke to their rather scary 500EXC-F. 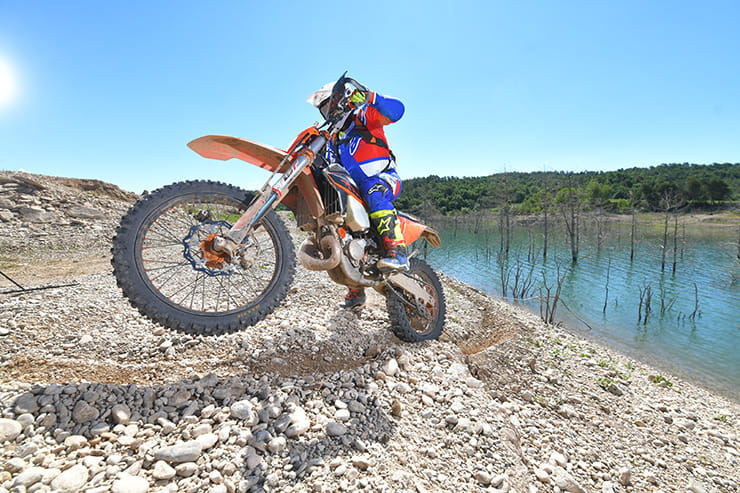 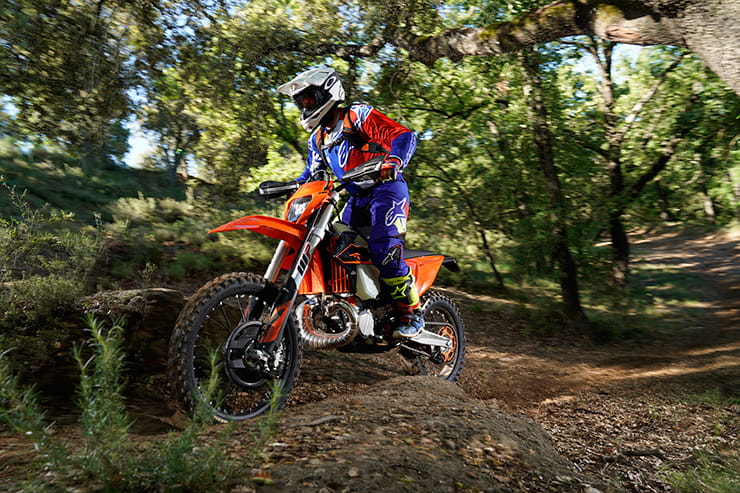 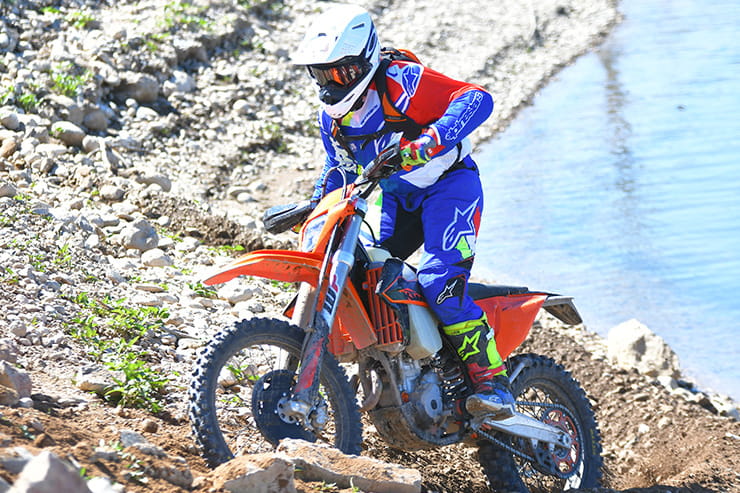 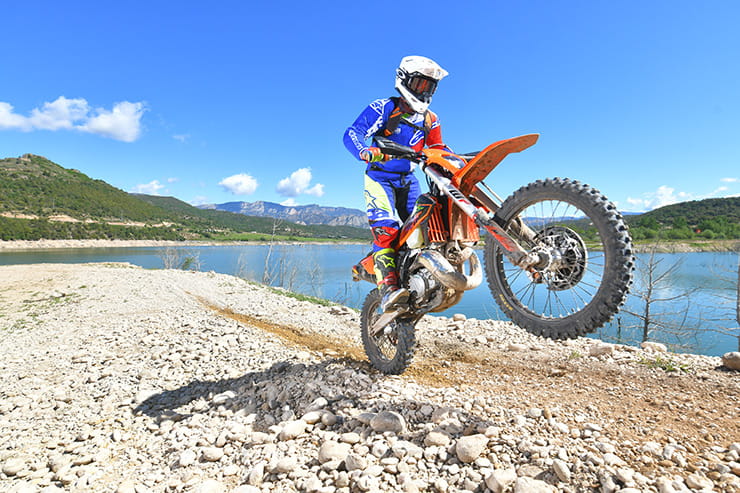 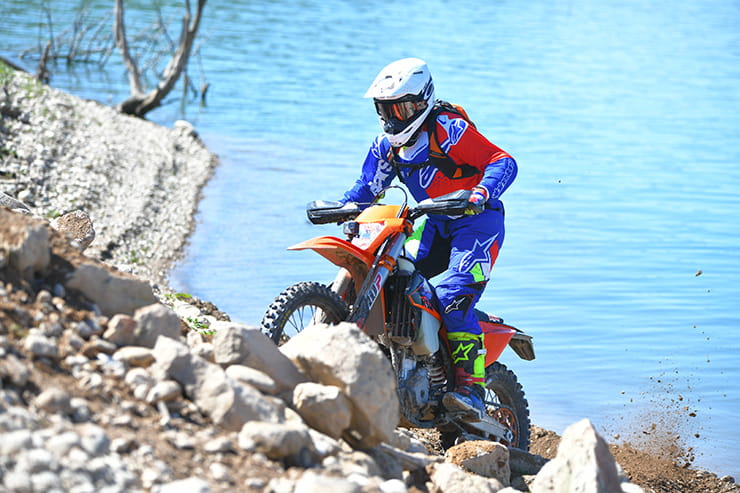 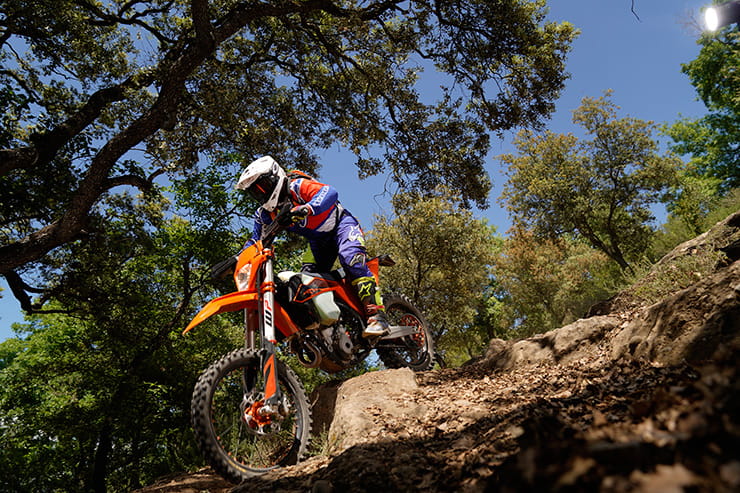 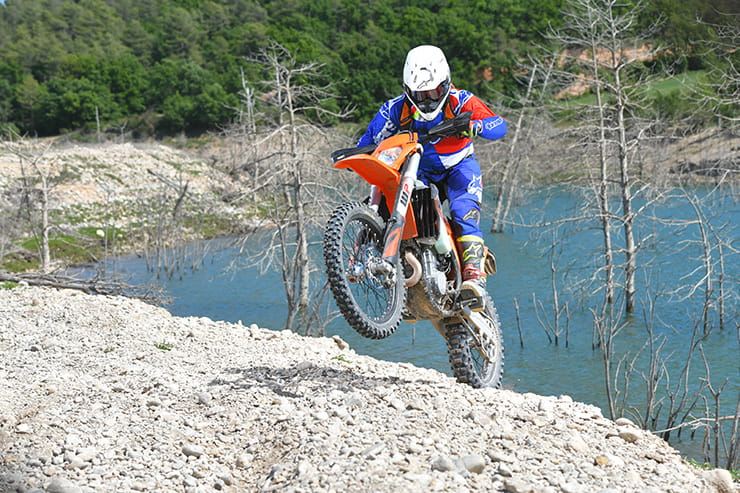 For 2020, KTM’s range consists of seven models. At the lower end is KTM’s all-new 150EXC TPI, which is homologated for Euro 4 and therefore road legal. Their 250EXC TPI and 300EXC TPI complete the fuel-injected two-stroke range. If you opt four-stroke you have a choice of four different models, 250EXC-F, 350EXC-F, 450EXC-F and finally the 500EXC-F.

KTM’s off-road racing experience and expertise is unquestionable and continues to be at the forefront of all racing, and the latest range of Enduro bikes benefit from the latest innovations gained in racing, not just in Enduro, but Motocross and even Moto GP too. For 2020, each model is around 60% new with the 150EXC being an entirely new bike. 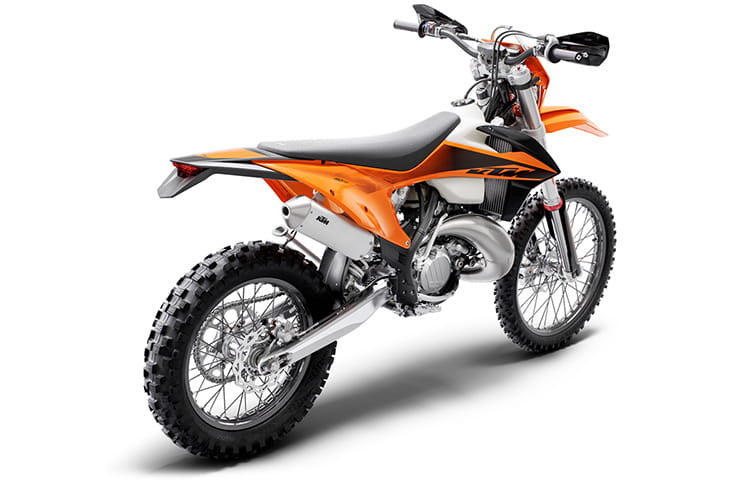 A new frame designed to give more torsional stiffness yet more flex in places. Cylinder head to frame mounting is new while on the 250/300 EXC models the engine has rotated forwards to improve the front wheel grip. The rear subframe is lighter but longer by 40mm to increase strength. WP suspension has been improved across all models, with new adjusters, a new mid-valve piston and revised settings. Fork rings also come as standard on all models, which measure/indicate movement and clean at the same time. At the rear, the WP adjustable shock receives revised damping and the shock is still directly mounted to the rear shock. 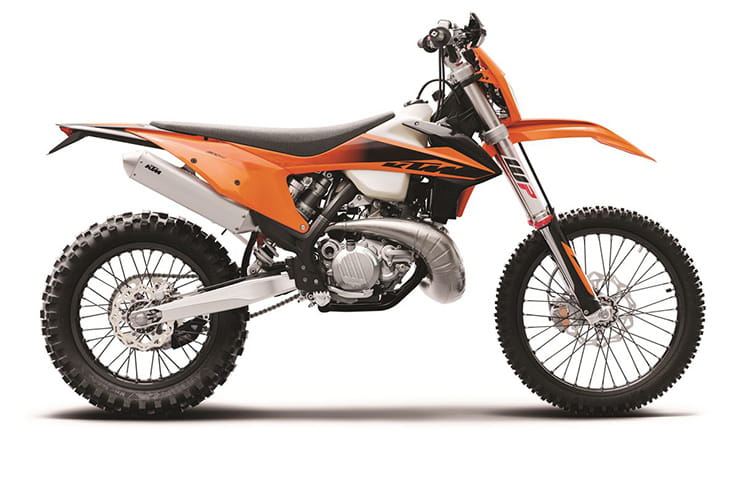 It’s now been two years since the launch of KTM’s very clever fuel-injected TPI 250 and 300 bikes which means the new bikes benefit from 24 months of development and racing. According to the Austrian firm, the range of two-stroke engines are more efficient with improved performance. What also helps is they now feature a new air pressure sensor, which communicates to the ECU and compensates the fuel injection dependant on air pressure. The four-stroke machines receive an increase in performance and not necessarily peak power. Interestingly the kick-start has been completely removed from the four-stroke engines and is not even an optional accessory. This allows completely new exhaust routing and a cleaner appearance. Kickstarts are still optional on the 250 and 300 TPI models and they both receive completely new exhausts to improve performance and reduce noise. The new exhaust comes with an easily distinguishable corrugated surface on the header pipes to add strength against debris, but not on the new 150. Radiators are new on all machines, with increased cooling and mounted 12mm lower, the big 450 and 500 are fitted with electric fans as standard. Airboxes are also competently new. 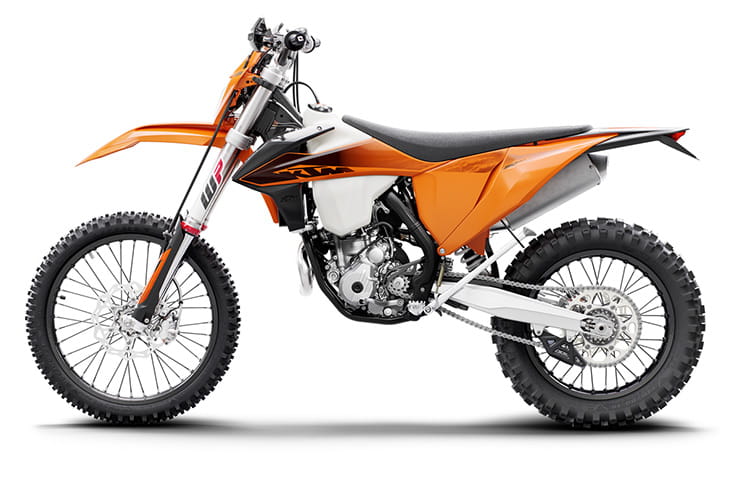 As you’d expect, fresh graphics but also new thinner sculpted bodywork and a new seat. The seat has more padding than before, more so towards the rear without compromising seat height, which is the same as previously. There is an optional 10mm lower kit if needed. The bodywork is noticeable thinner towards the rear. We could go on as the changes appear never ending; the fuel tanks is new, even the oil tank has more flexible mounting points for improved longevity; KTM hasn’t left any stones unturned. But the proof is in the riding, so let’s get going… 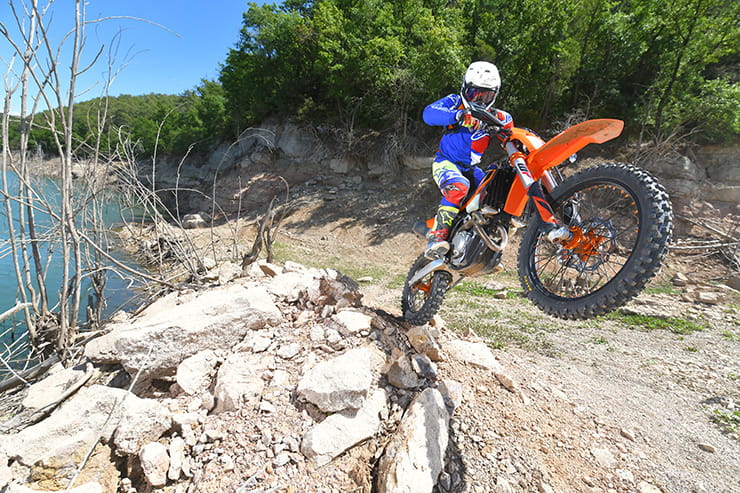 The completely new 150 TPI benefits from the engine and chassis changes mentioned above. It takes all the qualities of the proven two-stroke models with direct fuel-injection and proven reliability. Interestingly the kick start remains and it doesn’t have the corrugated surface on the exhaust like the 250 and 300. I’ve competed at a few club events which is why I love the rev-happy 150 two-stroke, it felt like a very fast mountain bike it’s that light. You can ring its neck and it’s not going to jump back at you and bite you in the ar*e. There’s even a two-way throttle map that softens the power further.

The throttle response is impressive. In the tighter wooded sections it will happily pull you through the tight sections while out in the open you can ride it wide open clicking through the gearbox – I felt like a teenager again! I’m relatively light, and short, and prefer to ride more technical tracks, not wide open so the 150 won't fit everyone, but I love its toy-like ability to make me smile. It’s very novice friendly and easy to ride yet even the experts on the world launch loved the fun factor the 150 delivers. 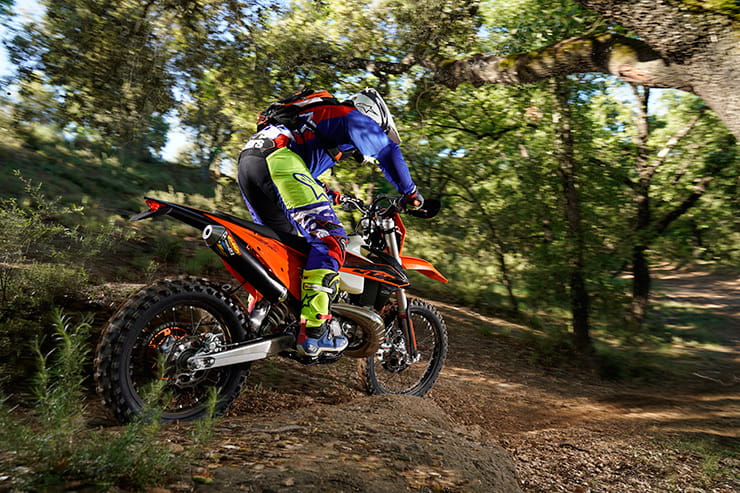 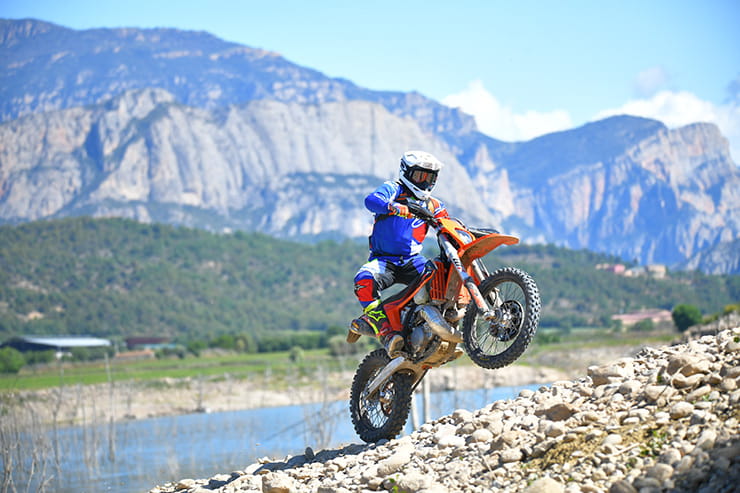 The 250 was my first choice for the days riding mainly because I’ve ridden the now ‘old’ model many times previously. KTM has made the 250 easier to live with by being more manageable at low rpm when you’re negotiating tight sections. Considering it’s a 250 it’s not the animal you’d expect, however higher in the rpm it is still aggressive, probably more MX than Enduro. Again, like the 150 there are two rider modes which soften or sharpen the fuelling and can be easily switched over on the fly, so long as you’re below 4,000rpm.

The 300 fells a little easier to ride, and not as MX like, which may sound strange but as it has more torque I found I wasn’t chasing the revs as much although in more experienced hands the opposite might occur.

Both are manageable and light which encouraged me to push my skill levels to take on trails I wouldn’t normally attempt. The slimmer rear end allows you to really hang off the rear down deep descent and the seat feels grippier and softer than before. 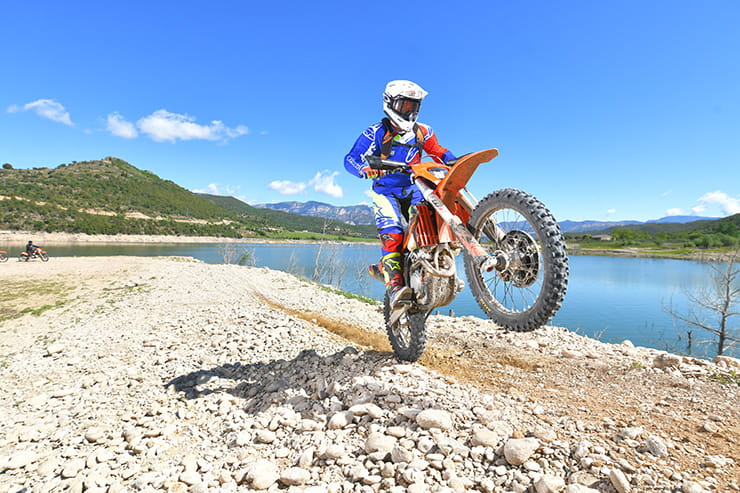 The 250- four-stroke is the friendly dog of the bunch, I raced one last year and it was a doddle to ride, the perfect beginners' bike and in many ways is actually easier than the lighter two-stroke 150. When you’re tired after a four hour Enduro, you’ll love the 250. The feeling the 250 provides inspires confidence, the power in the low rpm it’s lazy; like an old diesel Land Rover it’s happy to plod along and pull your our of any scenario. When the pace picks up the 250 will pick up her skirt and run, yes you must use the gearbox a little more, but arguably that makes it more fun. If the 250 was a road bikes it would be an easy-to-ride Honda CBR650R or similar. 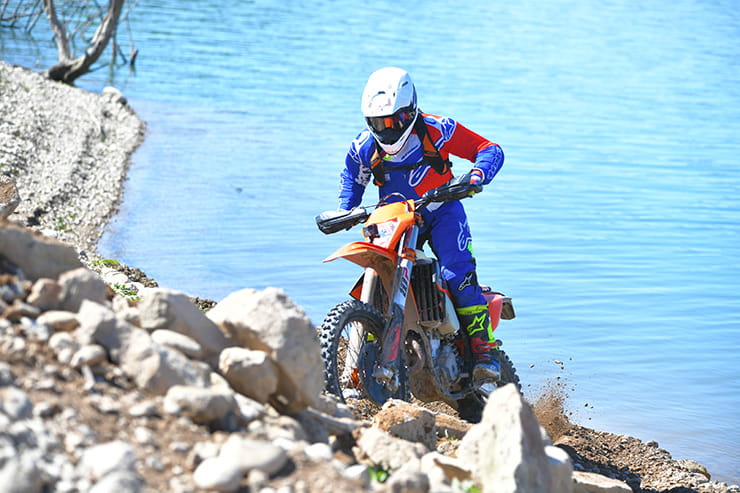 It’s easy to see why the 350 is so popular, its all-round ability is a clear highlight. For many of the riders on the world launch, from club level riders to former international racers, the 350 four-stroke was always in their top two. It has the ease-of-use of the 250, even experienced hands won’t find it intimidating, and equally more experienced riders will appreciate the extra grunt the 350 delivers without being scary. It’s quick but still manageable, I didn’t find myself simply being a passenger and always felt in control… up to a point. The 350 is the perfect all-round bike, ideal for a leisurely ride with mates, yet can compete and race the next day. This is the bike the pro riders choose. 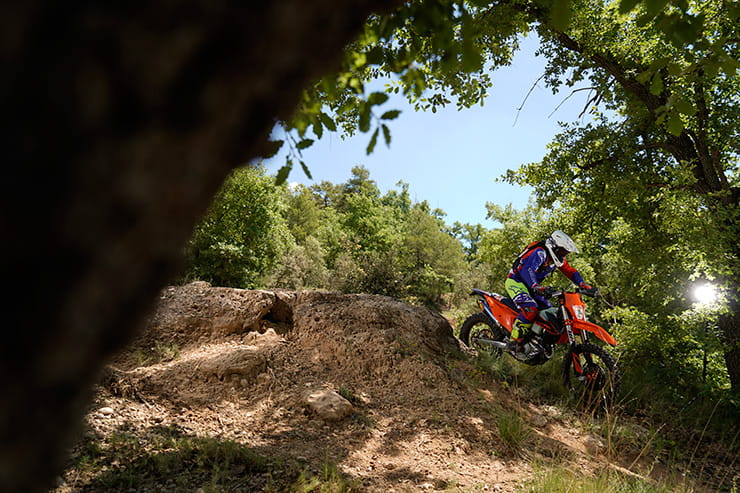 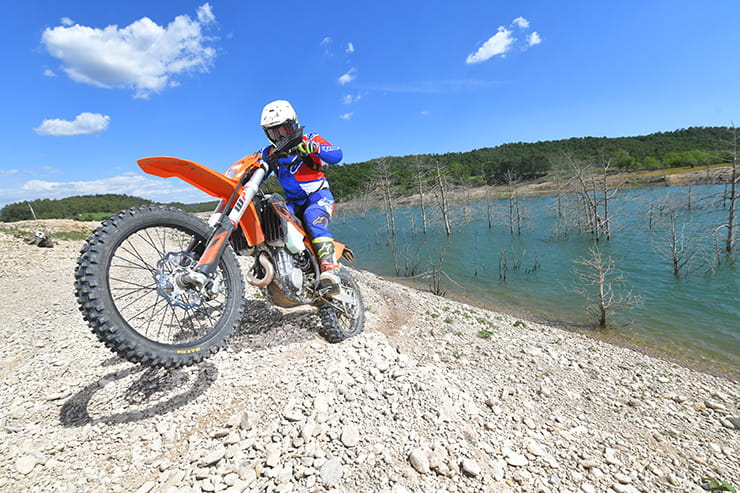 For me you really notice the increase in weight and power. I’m only 5’7 and at clubman level and felt a little intimated by the 500. Saying that, at low rpm you can tickle the big girl around, it’s not the animal you’d expect. But then it leads you into a false sense of security, ‘this 500 isn’t all that’ then you tickle the throttle a little bit more, listen to airbox gasp for air and you're propelled forward at an alarming rate. On the open section, I loved the power, like riding a Superbike on the road. But, I couldn’t easily see myself getting into a messy situation on the 500. The ride quality is impressive, the suspension feels plush, and there’s traction control and two rider modes for taming the beast. It’s impressive that KTM can produce such a powerful bike which is rideable even for inexperienced hands. But if you poke the 500 in the eye it will still bite you. This is the Superbikes of the class.

You can afford to be lazy with the 450 as like the 500, it will pull up a mountainside. It does feel physically smaller and lighter than the 500, less tendency to miss apexes and ride wide as I did on the 500. The brakes are impressive on both models but I felt I could physically get the 450 to turn easier than the 500. In many ways, the 450 make a lot more sense than the 500, but for me, if you’re going to go big four-stroke you may as well go big. If you’re going out for a few drinks, have a few and don’t come home ‘til sunrise. 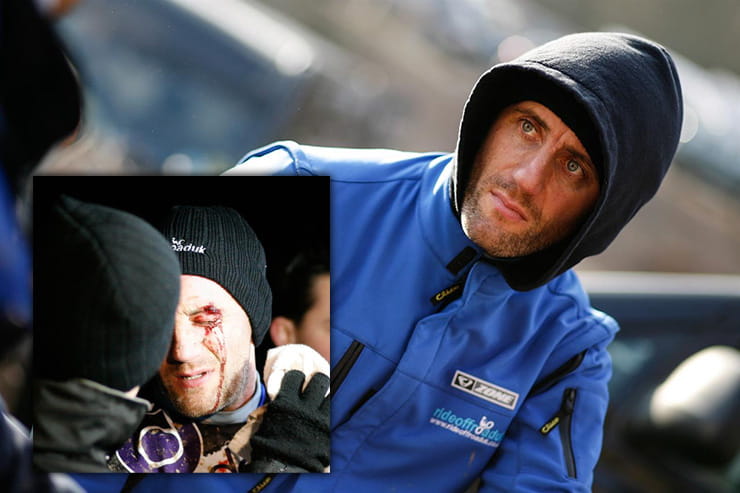 Wayne Braybrook, before and after the 2012 Tough One Enduro Challenge

“The 150 surprised me as you tend to think of it as an over-bored 125, you’d think you’d have to be in bottom gear all the time, but you don’t. When you crack the throttle it’s a busy little bee, you can get on with it and have some fun, weight-wise like a 125. The 250 is the MX bike of the bunch, punch, strong power but easy to manage, as like the 300 easy to manage. There’s no power valve hit anymore with these bikes, the new mapping is excellent almost seamless. The new TPI means you don’t have to precise with the throttle, you can ride them both hard.

“The 300 will pull a gear stronger than the 250, making it easier to ride. The 250-F is your benchmark bike, the clubman hobby bike, does everything, pulls everywhere and just does its job. The 350 in the right hands is the weapon of choice, it’s what Johnny uses it. It has heaps and heaps of torque, pulls super strong, but is very easy to ride. The suspension is super plush, it’s not aggressive you don’t have to be careful with it, you can ride it hard.

“The 450 for me was the disappointment of the day it was aggressive, seemed super quick of the bottom, I know it’s a shorter stroke than the 500 which would lead it to be more MX, but it had too much lower down.

“The 500 was a big donkey, heaps and heaps of torque, it’s a big lump there’s no hiding the fact. To get it turned you need to be physical with it. On the open plane fast stuff, then fine, but the stuff we had today, not so much.”