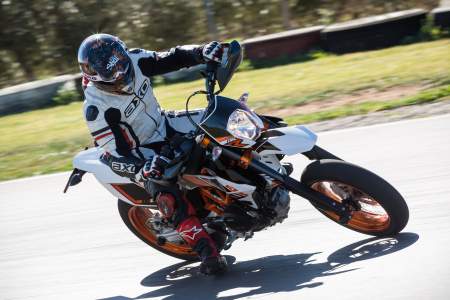 Debuted in 2012 in the 690 Duke, KTM’s latest LC4 engine is the most powerful mass produced single with a claimed 70bhp and 52ft.lb of torque. Which is going some when you consider it’s a single. However the technology doesn’t stop there, it also has ride-by-wire fuelling, twin spark ignition and even two oil pumps. Ok, it may only have a single overhead cam, but that hardly seems to be holding it back. Well for 2014 this engine now finds its way into KTM’s other large capacity singles – the SMC R supermoto and the Enduro R off-road bike.

Oddly enough, KTM actually revised both bikes last year, so essentially this is just an engine upgrade. However at the same time as fitting the new motor (with slightly reduced power compared to the Duke due to airbox differences), they have also added new WP suspension and also two ABS systems, one supermoto biased and one designed specifically for off-road use.

Starting with the SMC R I have to say I’ve always been a bit baffled by supermotos. These converted crossers are generally brilliant fun to ride for short bursts, but after more than twenty minutes the vibrations are annoying, the seat’s torture and the fuel range pathetic. Despite the SMC R’s focus, it is anything but this. The 690 engine means that this is a bike you can actually ride at 70mph (lack of wind protection taken into account), it will deliver around 65mpg, has a 12-litre tank and doesn’t vibrate like a jackhammer. A practical supermoto? Maybe not quite that far, but a great bike for hacking through traffic or playing around on Sunday afternoon blasts. 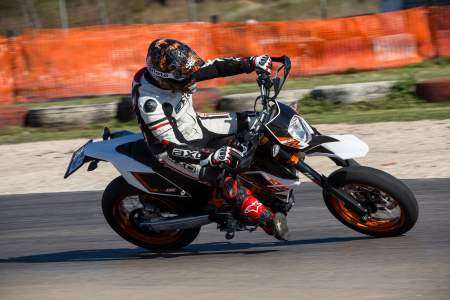 As you would expect from such a machine, the SMC R is a proper hooligan tool. It wheelies off the throttle in second gear, stoppies when required and actually handles pretty well. The long travel suspension takes a bit of getting used to, but through tight and twisty corners this bike rocks. And remarkably it is even stable at motorway speeds, unlike nearly every other supermoto I have ever ridden. The price is a bit of a stumbling block, but if you want a bike to have fun on and blat around when the mood takes you, this is one of the few supermotos I would actually say is worth owning. It’s mad enough to be fun, but not wild in a frustrating way. And the ABS is even pretty effective and with the ‘dongle’, which is a power part optional extra, you can even have ABS on the front and still skid the rear tyre!

If off-road is your thing then the Enduro R is brilliant. If off-road isn’t then this bike may very well surprise you as well as tempt you onto the trails. As well as the lovely thumping 690 engine with its smooth throttle response and gutsy low-down grunt, KTM have fitted its first off-road ABS system to the Enduro R. 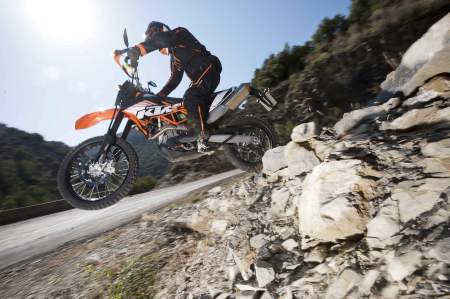 Off-road purists will turn their noses up at the thought of this, but to less confident off-roaders (myself included) it’s brilliant. During an off-road ride I found the ABS cutting in quite a lot, which probably meant it was stopping me cuddling a hedge or rock and picking up bits of broken KTM. As you would expect from KTM, the Enduro R is a proper off-roader with serious potential, but it is also an easy going bike for newer off-road riders and would make a great bike for an entry to off-roading as well as a rugged commuter. Like the SMC R the engine is more than happy at motorways speeds, as is the chassis, and aside from a tall seat height that shorter riders may find a bit restrictive, this is a really good option for those looking to get an enduro that can double up as day to day transport. 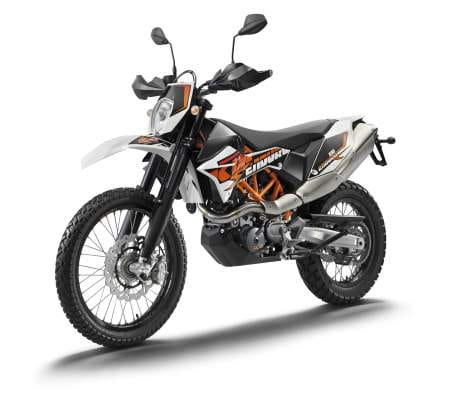 By extending the use of the 690 engine into the SMC R and Enduro R, KTM have created two fun bikes that although slightly focused in their outlooks, are actually pretty practical. For most owners they will probably be second bikes to enjoy at weekends, as opposed to the 690 Duke which is a good ‘first big bike’, but if you can spare the cash, you won’t be disappointed by either of these new models.