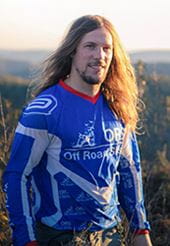 By Chris Northover
superbikechaos | Freelance rider, writer and instructor, Chris comes from a family obsessed with bikes; even his grandparents, who spent two years driving the race van to World Superbike meetings for him. Since escaping the race paddock, Chris has run away to Wales to instruct off-road riding and mountain biking. He’ll tell you his favourite bike is an Aprilia RSV4, but the truth is he’s a sucker for a Honda Dominator. 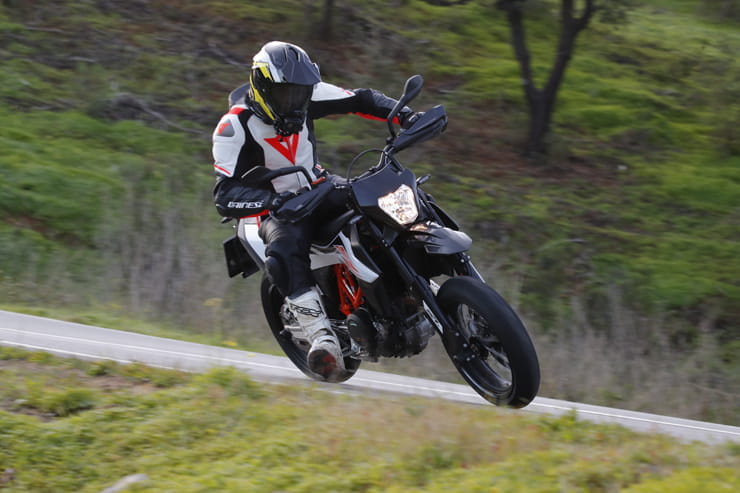 Supermoto is not dead. Hot on the heels of Ducati’s new Hypermotard launch comes a purer, lighter interpretation of a road going supermoto in the form of the new KTM 690 SMC R. The 690cc single-cylinder LC4 motor in the latest bike can trace its lineage all the way back to the four-stroke KTM enduro bikes of the late 1980s. And unlike other manufacturers who have dipped in and out of the supermoto world as its popularity grew and shrunk, KTM has stuck with it and stayed true to what makes a supermoto great fun. Light weight, a punchy single cylinder engine, massive brakes and a refusal to keep both wheels on the floor at the same time make the 690 SMC R a true hooligan’s dream. And the latest version comes with a sophisticated electronics package to back you up when you get carried away. We spent a day riding it on road and track to see if a single-cylinder bike could deliver more smiles than numb fingers. 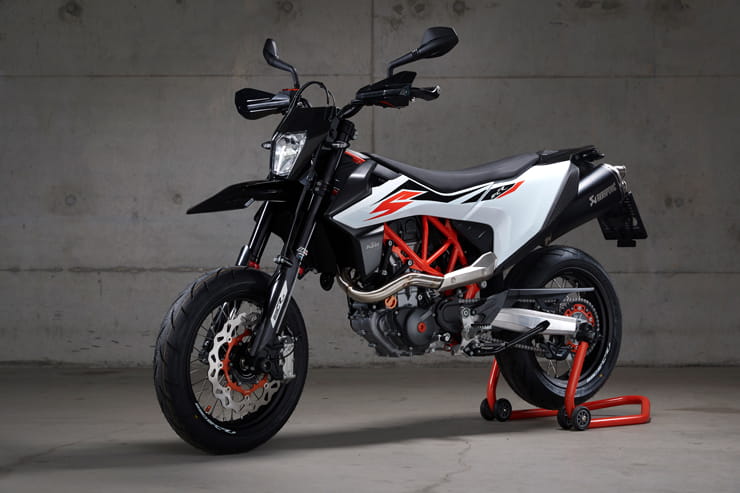 The new 690 SMC R is available in KTM dealers now and you can be wheelying one away for £9,599 on the road. 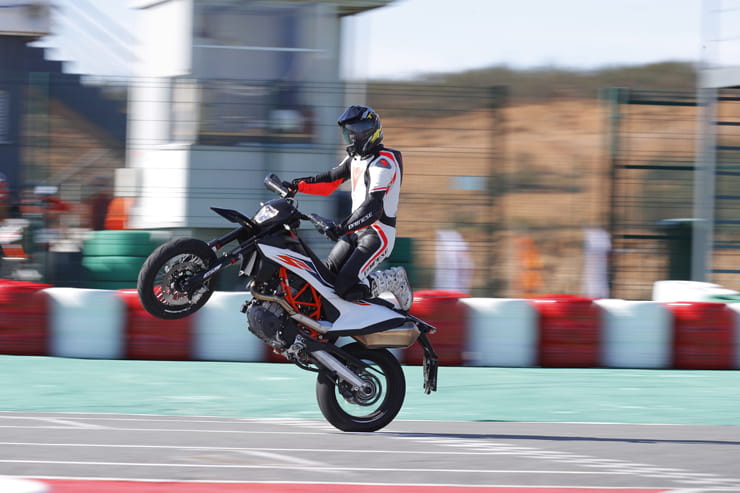 Here is where KTM is in a class of its own as far as single cylinder bikes go. The outgoing 690 was the most powerful single cylinder production engine available and this new one gets a 7bhp boost to 74bhp with 73.5Nm of torque, helping it retain that title. The increase in top end power hasn’t come at the expense of power anywhere else, in fact the torque curve is smoother, but the new engine hangs on longer, building power at the high end of the rev range. The result is addictive. You get a lightweight bike that has punchy power delivery for that addictive single-cylinder braap feeling out of tight corners and junctions. But instead of wheezing and running out of puff on more open roads like a big single is supposed to do, this one just keeps pulling. It is as happy punching about at 2,000rpm as it is singing along at 8,000rpm; no mean feat for a piston the size of a dinner plate. The electronic ride-by-wire throttle now gets selectable riding modes – street for a softer response and sport for a little more aggression when you twist the noisy grip. The riding modes are also tied into the new traction control system, which keeps things nice and calm in street mode and allows wheelies and a little more slide in sport mode. Simplicity is the key here – just one switch on the left of the handlebars to toggle between riding modes, one for traction control and one by the minimalist dash for the ABS. Speaking of ABS, the system on this new 690 is a proper high-spec Bosch cornering ABS system, letting you keep on riding hard with confidence even once the weather closes in. For track addicts, there is a KTM PowerParts dongle available to unlock Supermoto ABS, allowing you to lock the rear tyre and stoppie, but retaining the cornering ABS function on the front tyre only. 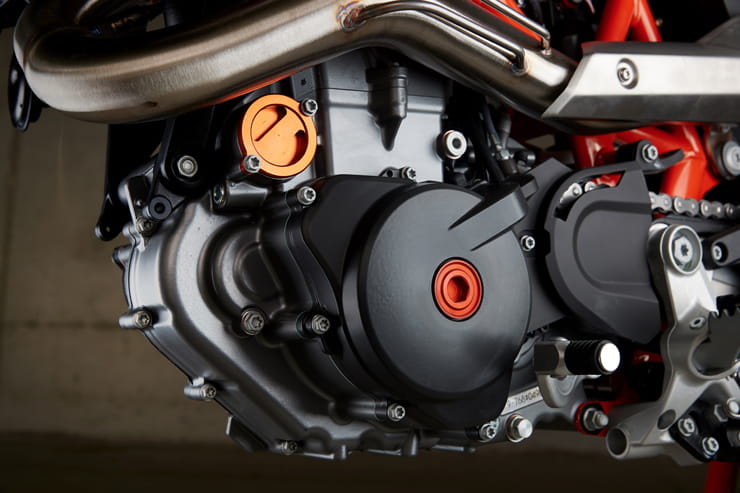 That new performance comes courtesy of the latest round of developments and modifications to the legendary LC4 engine. Shorter stroke and bigger bore allow the new engine to rev higher and make more power. Balancing out the extra performance, literally, is a new balancer shaft, located in the cylinder head to give it the best effect in fighting the forces from the crankshaft. The slipper clutch now features a torque-assist design, allowing a lighter feel at the lever, super helpful when riding at slow speed around town. Outside of slow control, there’s little need to trouble the clutch lever as the new quickshifter lets you flick up and down the gears, clutch-free. The shifting could be a little fiddly to start, but this was improved dramatically by adjusting the lever position, after which it was plain sailing up and down the box. The slipper clutch is smooth in its action when you’re knocking it down the gears into a tight bend on track, letting you tip into a turn with the wheels out of line comfortable that it will sort everything out in time for the apex. The exhaust note is surprisingly muffled for such a high performance single, to be honest, it’s a breath of fresh air compared to traditional ASBO-attracting motocross-derived supermotos. The subtle exhaust means you can carry on playing and enjoying your ride, without alerting everyone in a five-mile radius that you’ve turned the local industrial estate into your own private race track. If you want more noise, less weight and a touch more bling, then the Akrapovic accessory silencer will do the trick just nicely.

With no chance to refuel on our test, exact economy figures are going to have to wait until we get one in the UK for a full real-world road test. The fuel tank itself now has an increased capacity of 13.5 litres, giving a more useful range when out for a ride. The outgoing 690 motor returned a miles per gallon figure in the mid to high forties, so we’d expect the new model to be in the same ballpark. 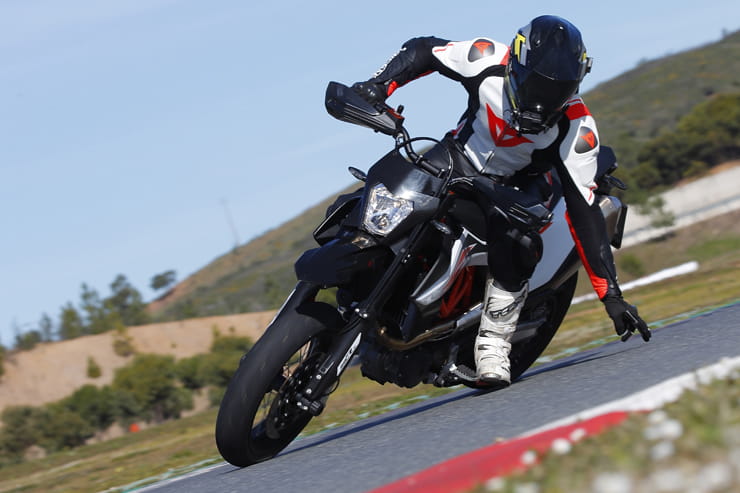 Bonkers. For all of the above. Look at the other 650cc-plus supermoto road bikes on sale new today and there isn’t one that comes close to the low weight of the 690 (other than its stablemate, the Husqvarna 701). That’s what makes the 690 feel so playful, so easy to throw around. Sure the Ducati Hypermotard has more power, but it’s also carrying an extra forty kilos of weight. That’s forty kilos extra to muscle around when you’re trying to push your limits on the carpark, sorry, kart race track. Don’t get me wrong, the Ducati is a fantastic machine, but for the authentic supermoto experience, low weight is king. The suspension package on the SMC R leaves nothing to be desired, with fully adjustable WP Apex suspension front and rear. We left the settings as standard on the road, but followed the sport settings suggested on the under-seat label for track use. What impressed the most was that, even without troubling the adjusters, the bike was so flexible, retaining composure under exuberant braking and turning, yet giving good feedback and feel when cruising along, flowing between the curves. The new, stiffer, lighter chassis also gives increased steering lock, helpful when u-turning for another pass at those corners. 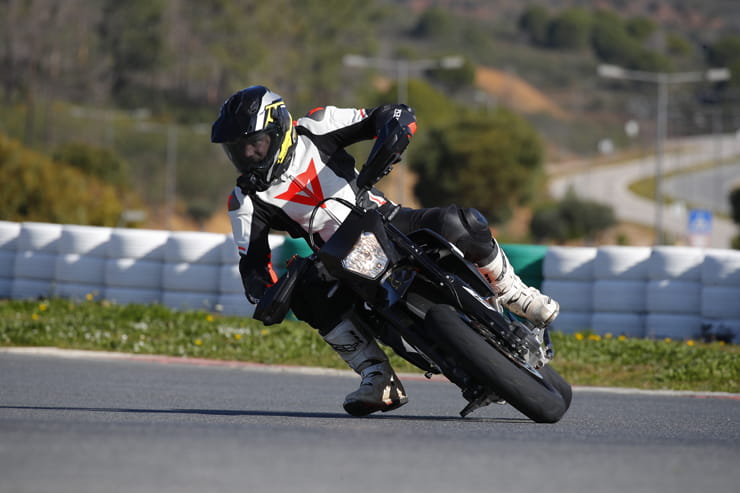 To take advantage of the new Bosch cornering ABS system, KTM fitted the SMC R with an enormous 320mm disc and a Brembo four-pot monobloc calliper. Hauling up was never an issue, trying to behave and not stoppie up to every junction was more challenging…  With the ABS on in street mode, you have the confidence to brake hard and deep into turns on unknown road surfaces, giving you confidence in all conditions. 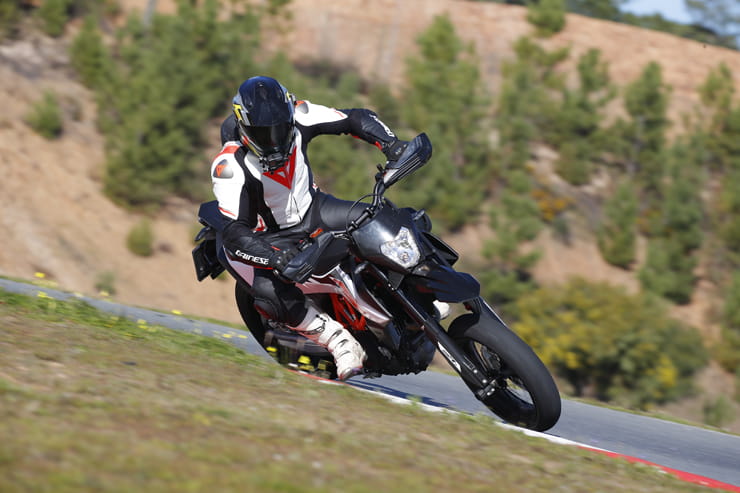 Comfort and touring are not the strongest selling points of the SMC R – there’s very little in the way of wind protection and the 13.5-litre fuel tank will get tedious if you’re trying to cross continents. But for shorter journeys, city work and general playing, the SMC R is actually a very nice place to be – the riding position is upright, relaxed and spacious. The long bench seat gives you room to move around to get comfortable and the handguards keep chilly wind off your digits. 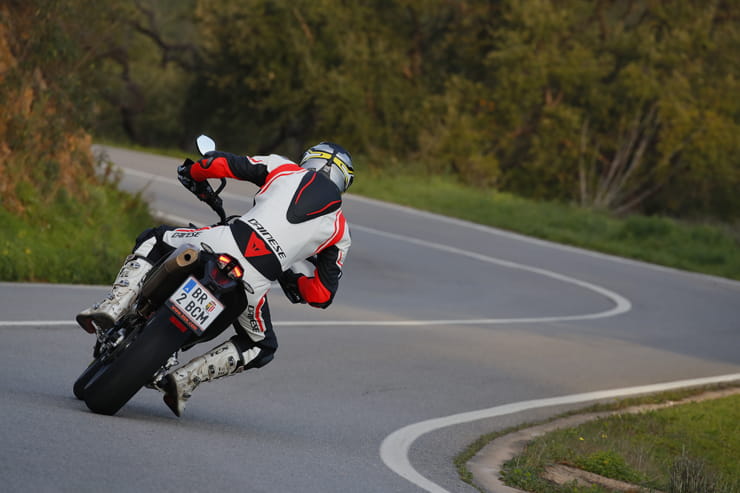 With rider modes, cornering ABS, traction control and a quickshifter, the SMC R is very highly specced for a single cylinder supermoto and that level of equipment goes a long way to justify the £9,599 price tag. Other areas, like the minimalist LCD dash, are actually a step back in equipment level from the previous models; KTM’s reasoning was to improve the riding experience with rider aids, but keep the rest of the bike minimalist. Personally, I didn’t miss the rev-counter and more detailed dash one bit. The accessory catalogue is filled with all the goodies you’d expect – Akrapovic silencer, anodised trinklets and crash protection for the more enthusiastic rider. On the practical side, there’s a low seat height option available, reducing seat height 40mm to 850mm. 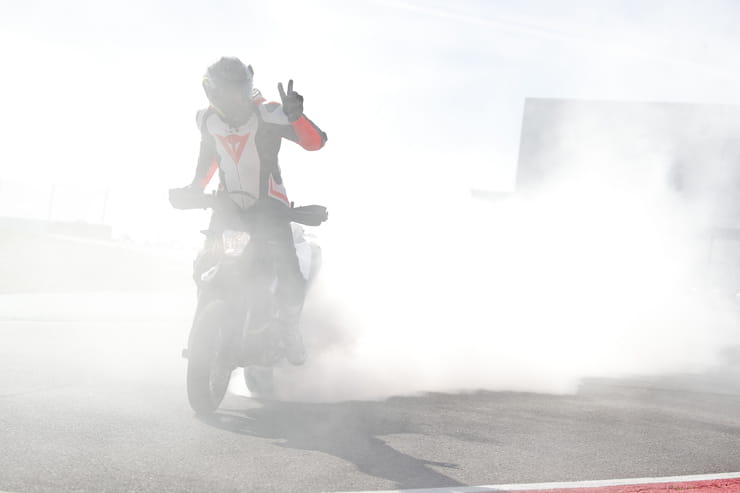 The KTM 690 SMC R is and always has been a riot to ride. Light, frisky and fun. The 2019 update has added practicality with more fuel range and a smoother engine, while giving a little extra top end to help on the faster roads. Sophisticated electronics now open up the fun to riders of all abilities, giving you a safety net for when you get carried away on the local kart track, or when a sunny ride turns into a slippery rainy mess. It is still a supermoto, so if wheelies, tight twisty roads and skids don’t float your boat, then the SMC R isn’t the bike for you. But if you have a mischievous streak and want a bike that will happily ride to work on Monday after a weekend of skids and stunts, then a 690 SMC R will have you grinning into your coffee all week.

• Having to give it back at the end

• Motorway or distance riding would be hard work