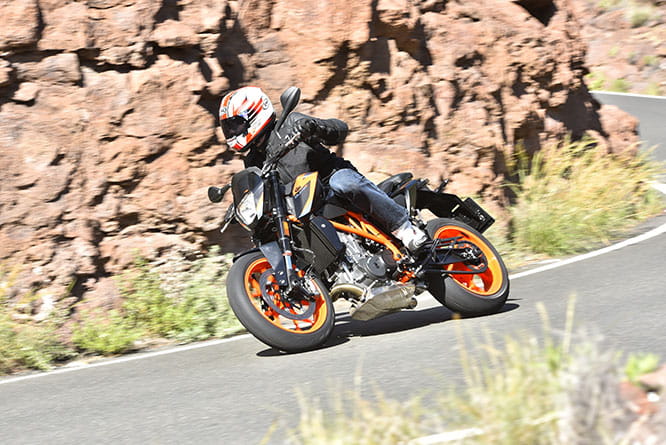 50,000 Dukes have been sold since then, globally. From the 620 to the 640 and finally when the model got its first 690cc engine in 2008. The streetbike has been a popular middle-capacity, lightweight, hugely capable bike since, offering the less experienced a highly suitable bike to learn on while the more experienced can have a real hoot.

25% of the bike is new while over the half of the LC4 engine components have been changed to make the impressively powered single-cylinder almost as smooth as a twin. We’ve been riding both new machines on the sublime roads of Gran Canaria as well as stretching the R’s legs on the Canary Island’s cheeky little Maspalomas circuit at the press riding launch. 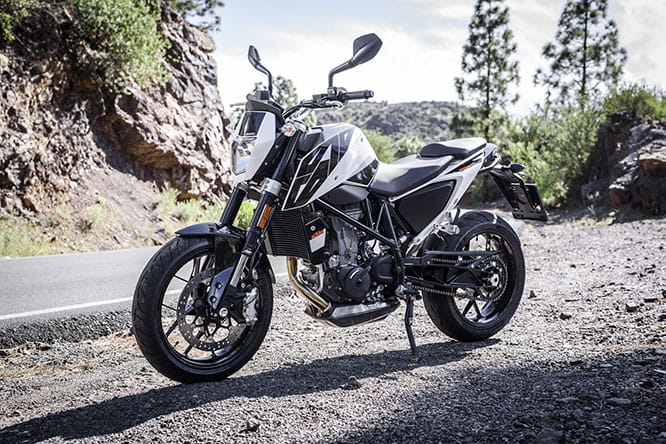 The two new bikes get 1000rpm of extra revs thanks to a new cylinder head, refined exhaust and inlet systems, and another balancer shaft to smooth out the punchy single-cylinder motor. So while maximum revs is up to 9000rpm, actually peak revs are at an impressive 8500rpm but then we are taking about the company that gave the world a 13,500rpm single-cylinder Moto3 bike.

The two Duke's get new mapping too and updated fuel injection system helping the standard four-stroke 690 Duke make a claimed 73bhp, and the 690 Duke R produces 75bhp making it the most powerful production single-cylinder motorcycle.

A dollop of sophisticated technology not usually seen on middleweight bikes has been added including rider modes; the 690 Duke has just the Street mode as standard but has an optional 'Track Pack' (for €299 - a UK price has yet to be confirmed). This electronic upgrade adds traction control, Supermoto ABS where the rear ABS is disengaged allowing for some rear end slidey action, it also enables stoppies. Always helpful. Motor Slip Regulator (MSR) is also included which is essentially a slipper clutch, as well as two added rider modes: Sport and Rain.

The rider modes don't adjust the bhp like some machines, in fact they only alter the how the power is delivered through the sensitivity of the throttle. Traction control settings are also altered dependent of mode which can be adjusted via the left bar controls and the sparkly new TFT display all while riding. Although to confirm your choice of mode once selected, you will need to close the throttle.

On the 'R' model, the three modes are equipped as standard and are joined by Cornering ABS which is lean angle sensitive, traction control and the Motor Slip Regulator, plus the Supermoto riding mode.

The ABS and Traction control settings can only be changed when the bike is stationary.

The R also gets the full fat 75bhp motor, an Akrapovic silencer, fully-adjustable WP suspension and a Brembo Monoblock front caliper and is distinctive by its orange chassis and wheels. 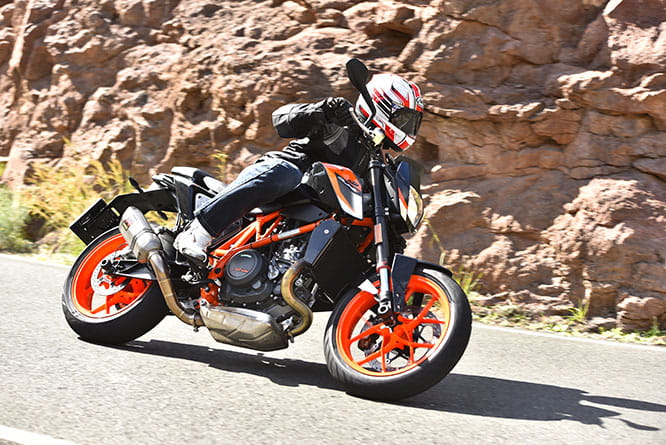 All of that means the 'R' is £1300 dearer than the standard model although both are more expensive than their rivals.

Competition in this thriving mid-capacity street/naked market comes from Yamaha’s MT-07 and Kawasaki’s ER-6n for the standard bike where KTM claim the 690 Duke wins on being the lightest with the best brakes and suspension package.

Meanwhile, the 690 Duke R pits itself against Yamaha’s MT-09, Kawasaki’s Z800 plus Triumph’s Street Triple. KTM say that while their new machine looses on power figures, it trumps its rivals with its weight advantage plus the combination of high spec brakes, suspension, electronics and rideability. I think a couple of group tests maybe upon us in the new year to establish how true those claims are.

Both bikes are A2 licence-friendly with a free restrictor kit available at the time of purchase so for those new to riding or to an A2 licence, the KTM should prove to be a popular choice. If required, the kit barely costs anything and can be removed once the next licence step is taken leaving

On the Road and Track

The press launch route tested the slim, compact chassis and its direct, light steering through many miles of fine mountain ascents and descents jam-packed with hairpins and tight twisty corners. The Duke's didn't flinch. They strolled around, gobbling up each and every one with aplomb. From tapping down the 6-speed 'box and aiming for an apex to opening the throttle to hear the familiar brrrrraaaaaaap of the single-thumper underneath. Effortless. Disengage traction control and the front wheel will lift with minimal effort, even in second. 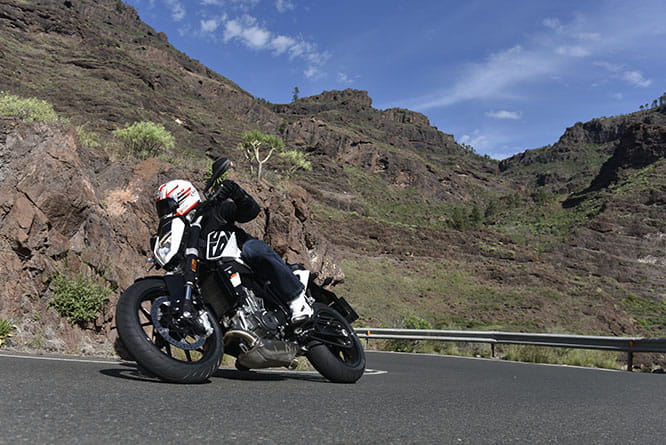 There's plenty of get-up-and-go about them. Spritely and enthusiastic like a cocker spaniel when you get home from work but, like a puppy, they require constant attention because what you can't do is leave them in one gear and think you can be lazy. You'll soon be found out as you attempt to open the throttle and the thing starts spitting and hopping, gagging for a lower gear.

Efforts are rewarded with an interesting, comfortable ride. You can spring around in the seat from corner to corner and be sure the bike will be planted. The lightweight feel is the bikes' USP, ably assisted with its direct steering and punchy motor while the Metzler Sportec M7's performed admirably offering no end of grip even on the looser surfaces further up the mountain. KTM must have taken us there deliberately to replicate some of the UK's rougher roads.

It's called a Street Bike for a reason and while the mountain roads are swallowed up with ease, in fact you'll be hard pressed to find a bike that would complete the passes any quicker, the KTM is firmly at home in towns and cities too. A light clutch and responsive throttle combined with that punchy, revvy 690cc motor and you'll have a fine motorcycle at your disposal. I'd avoid Sport mode for the low speed town bits just because the throttle could be classed as jerky.

The 690 Duke has a more upright riding position thanks to its slightly further forward and lower foot peg position, lower seat (at 835mm, 30mm less than the R) and shorter suspension travel (at 135mm, 15mm shorter than the R), this also means enthusiastic riding will be met with peg or boot scraping. 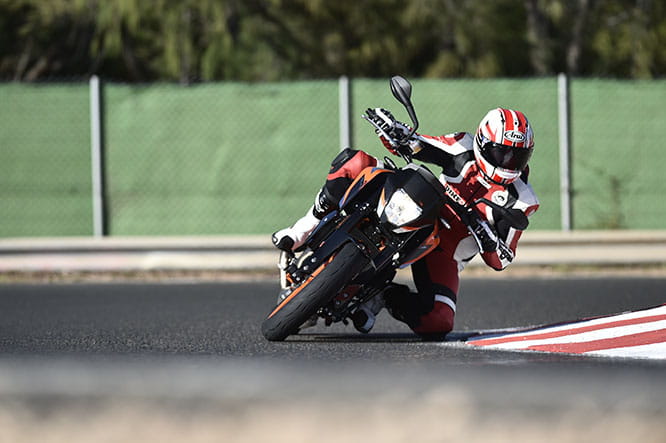 Hopping onto the R and you would hardly believe how different it feels for two bikes that look almost identical. The seating position is positively sporty by comparison, it pushes you forwards into the fuel tank but set off down the road and you can immediately feel the suspension changes and the alternate engine tone from the Akrapovic silencer. The ground clearance is 15mm higher allowing for plenty of lean angle before metal meets tarmac.

The front brake is also sharper thanks to the upgraded M50 Brembo calliper. The WP suspension is adjustable for compression and rebound damping on the forks up front and the monoshock at the rear. I didn't need to touch it on the road but stiffened the rebound for the track.

The Circuito Maspalomas is ideal for the 690 Duke R, you're either flat out or hard on the brakes then there's a long 3rd gear left-hander to test your arm strength. On the start/finish straight I saw 113mph and there's plenty left considering I was only at the top end of 5th gear. Hard on the brakes which received a hearty workout, back three gears and into a downhill hairpin, knee sliders flat against the floor then feed in the power and up into 5th through a fast flip-flop where there was no need to shut off, just trust the 690 R's ability and thou shall pass without problem.

The R will make a neat track-day weapon for the shorter or more technical circuits like Cadwell or Oulton, just don't take it to Silverstone!

It's quick enough, stable in both high and low speed corners, has sharp brakes and superb suspension. The electronics give you a game to play either by finding the right setting or simply trying to foil the re-set process. 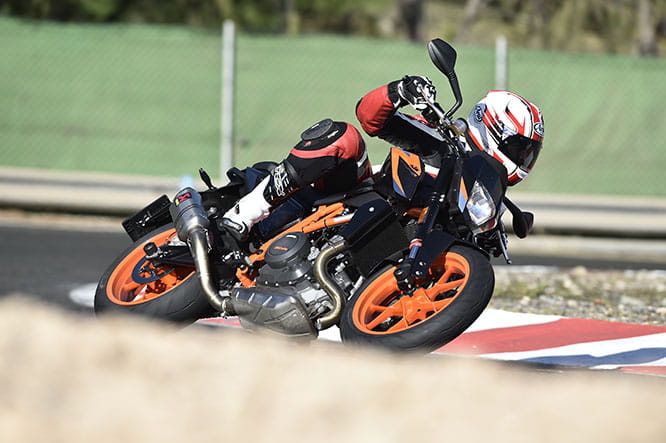 The only issues I had which were negligible but need mentioning nonetheless are the position of the gearshift which I would move closer to the floor if I owned one. I'd also change the mirrors which are easy to adjust but don't show much of what's going on behind…their primary purpose. They also vibrate like crazy over 65mph. And finally, the fact that once you've found your prefered setting, turn the ignition off or stall the bike and it will be re-set. Electronics giant and KTM partner, Bosch, say it's a safety feature but it can be circumnavigated by lifting the pillion seat and removing a plug. 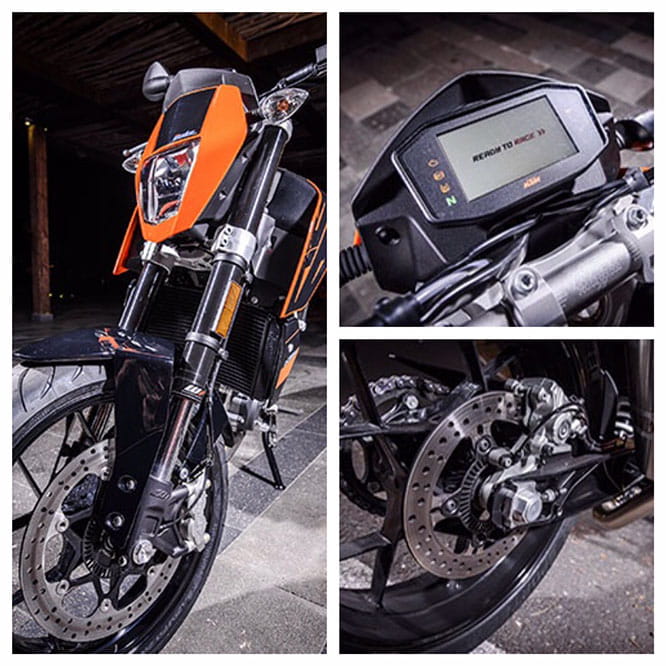