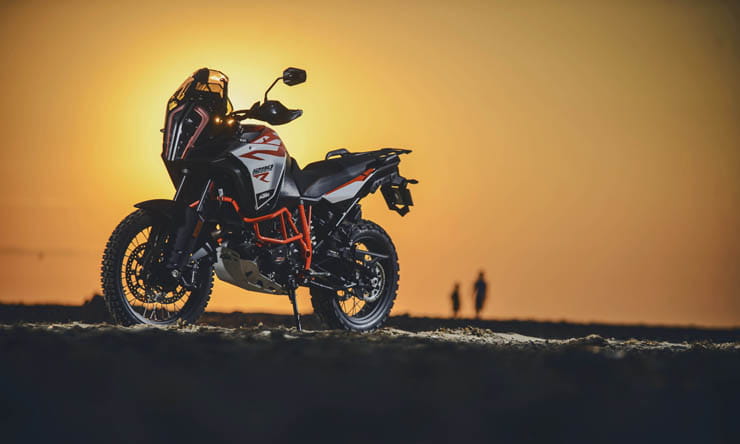 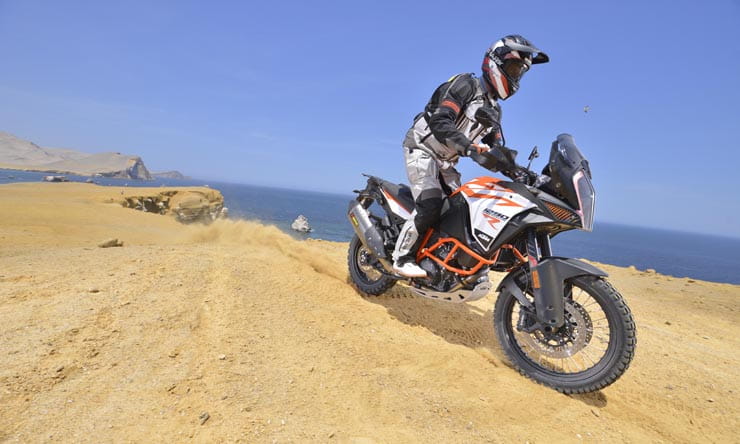 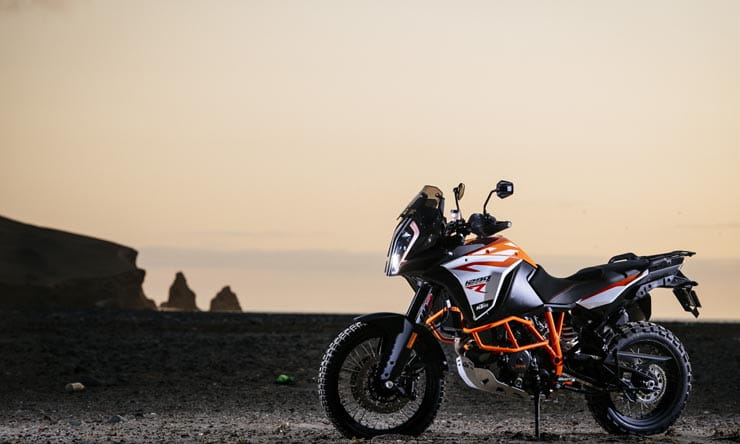 Surrounded, on all sides, by nothing at all; nothing but mile upon mile upon blistering mile of delicate white Peruvian sand, fine as talcum powder, deep as a snow drift, bleached by a relentless sun and annual rainfall measured in millimetres. A Pacific wind whips the tiny grains into great arcing dunes, rippling into the stinging blue sky like fluttering flags. The KTM 1290 R’s air temperature gauge says we’re cooking at 38°C.

Even through a dusty pair of tinted goggles, the Super Adventure’s rich, colourful, angle-adjustable 6.5in flat screen display is crystal clear and easily bright enough to read even in the harshest direct sunlight on earth. It looks like a high-end computer tablet, made with toughened glass instead of a plastic screen. Makes you realise the cheap clocks you’ve stared at your whole life are exactly that, and sets the bar high for every other manufacturer.

You either keep moving in this heat or boil in your own juices. The KTM has a remote start via a key fob, normally in a pocket but today in the waterproof compartment on the headstock (big enough for most phones, and has a USB charging point). Flick the power on, press the starter and the humungous 1301cc, 160bhp, 75° V-twin speaks up, grunting through an accessory Akrapovic can. Dab in the clutch, push the lever into first – KTM’s integrated quickshifter and autoblipper is a god-send on a big adventure bike off road – and the machine powers smoothly into action over the sand. Off-Road mode electronics hold the motor back to 100bhp, and somehow it digs in to keep finding traction – but moments later, on the same setting, it’s drifting sideways under power at speed. It’s almost as if the electronics adapt to suit what the bike is doing (they do).

We come to a path, of sorts – it’s the wheel tracks of the first two groups of riders led by KTM’s enduro star Chris Birch. These guys are expert off-roaders – frankly, Mr B could ride a KTM RC8R sportsbike on slicks in this terrain and make it look good. For a nervous off-roader like me – and, if I may, perhaps you too – the real test of the 1290 R is how much confidence it lends.

The big hill over to the left has the answer. From the trackway it looks impossibly vast, soaring into the blue like a desert skyscraper. Okay, I exaggerate – it’s actually a small hill. But it’s fairly steep; ordinarily, too steep for me to contemplate. Joachim Sauer, KTM’s Product Marketing Manager and ex-enduro rider of note, takes off in a cloud of dust and weaves his way to the summit, stops, looks back and waves. He makes it look easy.

Yeah, right. I’ve been in this situation before and ended up a proper banana. That was on a BMW R1200GS – currently the most refined road bike you could wish to ride. But, let’s face it, the attributes that make it so effective on the tarmac count against it away from the hard stuff – it’s a big lump for newbies to haul around in the dirt, what with shaft drive, Telelever and all. Fine for pros, but it can get pear-shaped very quickly for us mortals.

I’ve no idea what I’m doing, but the 1290 R has spent the day so far saying yes we can. I drop the light clutch, short-shift into third gear, and point the KTM in the general direction of up. By the time we’re a few feet off the peak, I realise two things: one, that really was easy and, two, how do I stop without over-shooting the top and flying off down the other side? Fortunately, the KTM has me covered; I roll off, look where I want to go, and the bike goes there like it knows that’s the plan all along. The 1290 R doesn’t so much breed confidence as give it away like free sweets.

KTM say the 1290 R is the biggest, baddest travel adventure bike to still offer genuine off-road ability not just to enduro hard men, but average riders too. They’re keen to pitch the 1290 R (and its on-road companion, the 1290 S) as a development of the previous 1190 and 1190 R models. This has led to a bit of confusion, because most people assume they’re derived from the existing, touring-based 1290 T – last year’s Super Adventure.

And, they are, to a point: all three models share the same Euro 4 modified ex-2016 1301cc motor. But the 2017 1290 T doesn’t get the R and the S’s technology updates: the big dash, new electronics, cornering headlights, back-lit switchgear or styling tweaks. It does, however, retain a 30 litre tank, while the 1290 R and S have 23-litre tanks. So if I’m a KTM customer and I want the most touring-oriented Super Adventure, I’d go for the 1290 T – but then be disappointed to find it doesn’t come with the fancy dash and new electronics. I put this to Gerald Matschl, KTM’s VP of Streetbike R&D – “Yes, we know we have introduced a little confusion to the market,” he says, smiling.

Anyway, you also have to choose between the 1290 S and the R – the off-roader differs from the recently launched S by having 21in/18in wire-spoked rims instead of cast 19in/18in wheels (for more strength and better handling off road); a flat, one-piece seat instead of a two-piece seat (for rider weight transfer off road); engine bars (for crash protection); a shorter screen (so it doesn’t get in the way when you go over the bars in sand); and long-travel, off-road, conventional WP suspension rather than the S model’s semi-active set-up. The R is also couple of kilos heavier, at 217kg dry, and £200 more expensive than the S, at £14,499 (the ‘2016 tech-spec’ 1290 T touring model is £15,499). 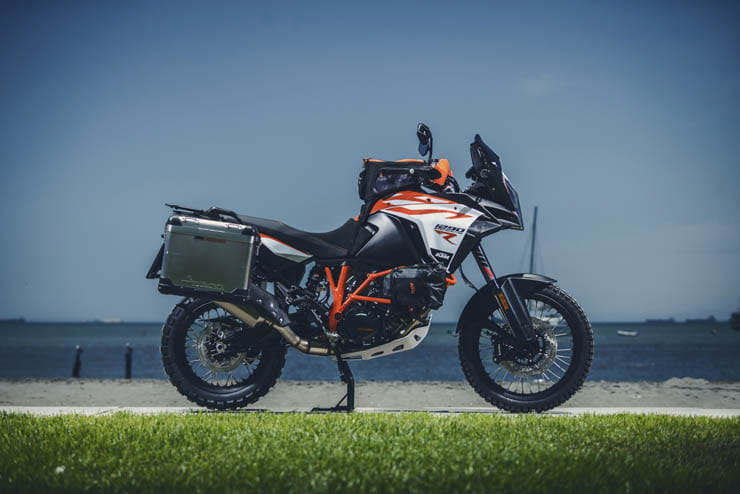 The R’s riding position is almost identical to the S model’s typical high and wide adventure stance. The R’s bigger wheels and long travel suspension push seat height up to 890mm from 860mm but it doesn’t feel intimidatingly high to a 6-footer. The bars are, like the S, adjustable backwards and forwards in the yoke so you can tilt them forwards for more off-road control – but, unlike the S’s single seat, the R’s one-piece can’t be adjusted for height (it’s worth noting less leggy riders on the 1290 R’s launch found the optional hill-hold control works wonders stopping the bike rolling back). It’s hard to say how comfy the R’s slim one-piece seat is over distance because the launch only included 20 miles or so on tarmac. Most of the off-road riding (nearly 120 miles) was standing up on the pegs, gripping the tank for dear life.

The 1290 R’s 160bhp motor is, naturally, a devastating weapon of a thing. A short road ride was the only chance I dared use the full power, full throttle response of Sport mode – and it delivers colossal acceleration. This is, basically, the kind of performance that would humble a sportsbike not too long ago. Last year’s touring-based 1290 Super Adventure was comfortably quicker than any of its rivals, and KTM’s emphasis on outright performance hasn’t been lost.

But in Off-Road mode, at 100bhp (coincidentally, same as the full output of KTM’s first V-twin 950 Adventure in 2003), and even with a softer throttle response, the 1290 R could still be over-powering on the loose stuff. That it isn’t, is partly down to the KTM’s user-friendly agility, suspension set-up and weight balance, but also partly to magnificent engine management from the KTM’s Bosch electronic brain – it measures the 1290 R’s directional status and supplies exactly the required amount of drive to keep it upright.

The clever electronics work in reverse too – in Off-Road mode, with ABS off at the rear and only active on the front, the 1290 R generates so much grip and buries the forks so hard into the loose dirt and sandy gravel, it’s genuinely mystifying how traction is maintained. There’s no pulsing at the lever, no sense of electronics taking over; the bike stops like it’s on tarmac. It’s genuinely, shockingly, good (as a side note, KTM have also improved the 1290’s head bearing and top yoke design over the old 1190; that bike had taper bearings which have a greater load area than ball bearings, but can be difficult to adjust; they either knock under braking or load the steering. The 1290 goes to ball bearings instead; you might need to change them more often, but they’re easier to set up).

The suspension surely helps with this. KTM own WP; their R&D departments are on the same site in Austria and they work hand-in-hand. The fully-adjustable but non-semi-active 48mm forks and shock both use settings and technology from KTM’s pukka enduro bikes to give professionally pitch-perfect control over the tricky stuff. The back end uses a twin-piston design, with a pair of pistons on one damper rod; the smaller piston augments damping via a separate circuit at higher loading. It gives authentic, progressive off-road damping – soft when you need traction (or comfort), hard when you need high speed control over bumps.

Speaking of the latter, the weight of the 1290 R (some 240kg fully fuelled) never runs away with itself, even over gravel tracks at 80mph. You really wouldn’t want to crash at that sort of pace; the sharp rocks and stone would be like falling onto a cheese grater.

But the 1290 R isn’t all about off-road control; it shares a few civilities with the S model – apart from the dash, the 1290 R also gets back-lit switchgear (one of those things you don’t realise is so useful until you have it, after which it’s hard to go back), and a new design of blistering LED headlights that, according to reports from the 1290 S launch, are a genuine help seeing through corners at night.

So after a day mucking about in the stunning landscapes of Peru’s southern coastline and inland deserts, the 1290 R has shown it’s at least partly what KTM bosses describe; the most powerful and capable off-road adventure bike yet – more power than a GS and, for my money (I’ve ridden all of them off-road), more at home off-piste than either a Ducati Multistrada Enduro or Triumph Tiger Explorer.

But the truly impressive thing about KTM’s 1290 Super Adventure R is how it’s the first big adventure bike to truly gather up a relatively novice off-road rider and hand-hold him or her every inch of the way, filling them with self-belief and managing its outrageous performance to help us all achieve a slice of fantasy off-road stardom. It lets us merely ordinary riders dip into the realms of the gods and see what it feels like, without making idiots of ourselves.

The 1290 R comes with an optional ‘Travel Pack’ that adds the quickshifter/autoblipper, electronic engine braking control (in addition to the mechanical slipper clutch), and hill hold control. A full compliment of packages – Touring, Comfort, Sound & Style and Rally – are available from KTM’s Powerparts catalogue, so you can fit a multitude of extras from the usual hard panniers and top box, soft luggage, cosmetic details, exhaust systems, a bash plate, heated grips – there’s even a twin-heated seat option. Visit www.ktm.com/gb/travel/1290-super-adventure-r for details. 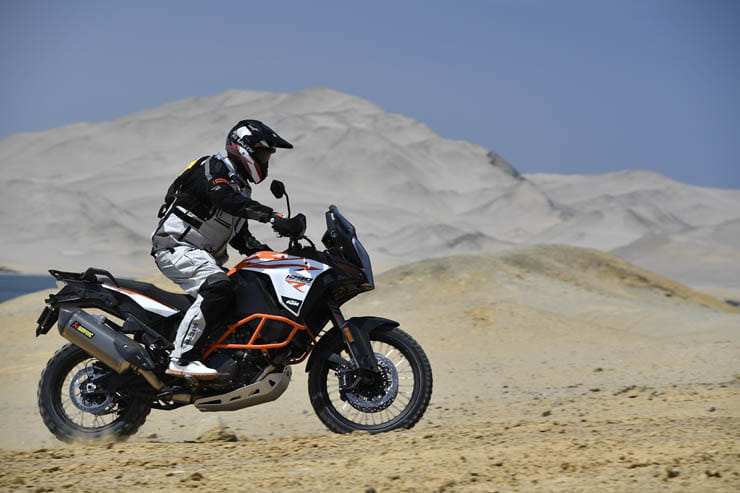