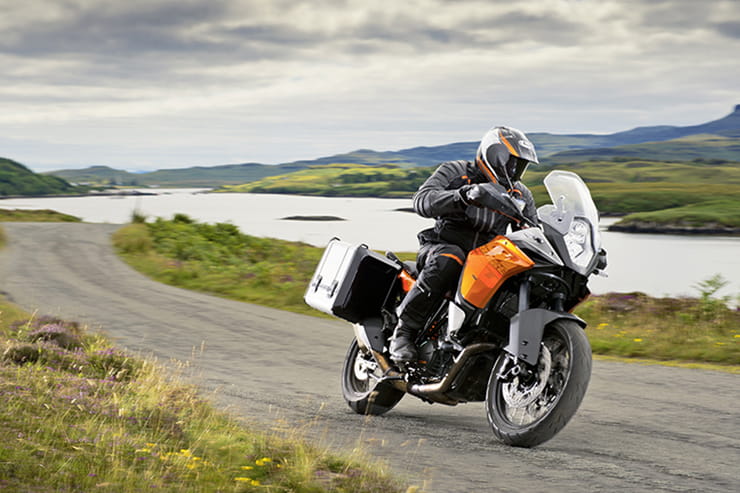 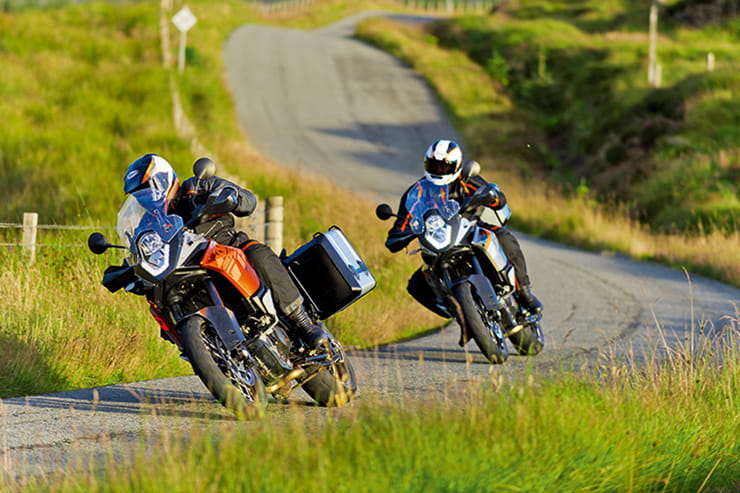 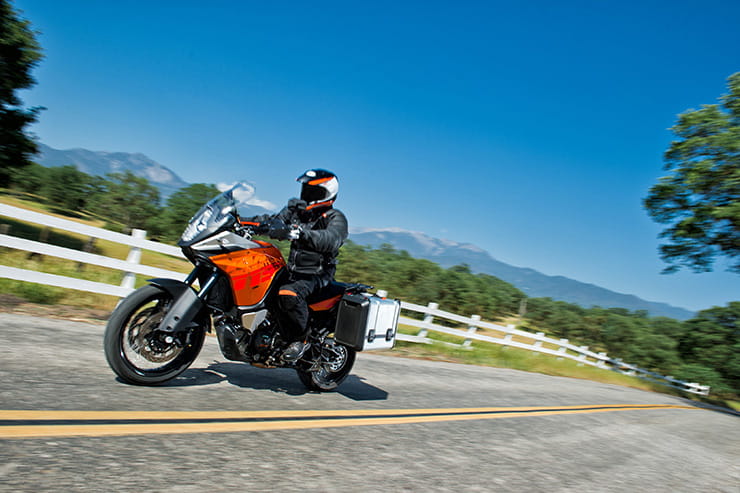 Taking over from the 990 Adventure, KTM launched the 1190 Adventure in 2013 as a ground-up new machine that aimed to deliver serious on and off-road ability in a package that contained no compromises. And you have to hand it to them, they hit the nail fairly squarely on the head with this spirited and blinking fast adventure bike. Less off-road focused than its R sibling (which has a 21-inch front wheel and the usual rugged terrain defeating mods) but still able to take to trails, the standard 1190 Adventure is a very sturdy machine that can handle the rough stuff but is more at home on tarmac. If you want a rapid adventure bike that has a bit of attitude, the KTM 1190 Adventure is well worth considering.

When it was launched the 1190 came with a price tag of £12,595, which was a major step up in costs from the 990 Adventure it replaced. There again, you were getting far more machinery and technology, so it is hard to argue against this jump in RRP. Nowadays you are looking at having to fork out roughly half this with dealers asking for in the region of £6500 for a used model. With the Adventure price tends to reflect mileage and a low-mile 2013 model will cost the same £6500 as a higher-mile 2015/16 bike, so it is probably best to go for an early bike (ideally a post-2014 one) that has been used more sparingly to avoid having to replace things that are wearing out. A low-mileage late model costs £7500 with prices of the replacement 1290 Super Adventure starting at £7800. The R model, which cost £13,195 new, adds about £500 to the used price tag.

Power and torque are two things the 1190 Adventure is most certainly not lacking in and the V-twin is one seriously fast and quick-revving motor. When it was launched the 1190 moved the bar in terms of outright performance but it managed to do so while retaining a smooth, clean and easy to manage feeling at the throttle. It’s fast but not wild or intimidating if you don’t want it to be. That said, there is still that KTM rattle about the motor, making it feel and sound a touch more mechanical and raw than the likes of the more refined Ducati Multistrada or BMW GS.

Based on the RC8 sportsbike’s architecture, the 1190 engine is one heck of a power plant and with a claimed 150bhp and 92.3lb-ft on tap it is very powerful for a machine that carries off-road styling. Owners absolutely love the V-twin’s surging power and it does make for a very relaxed ride as it is far from peaky thanks to oodles of mid-range. But it is far from perfect and like so many first generation bikes it does have a few issues, especially if you ride it all year around. There is a known ‘quirk’ that sees its battery’s performance drop in cold weather, making it hard to start as the V-twin needs a lot of oomph from the starter motor to overcome its compression. Weirdly, owners report that ‘warming’ the battery up by leaving the lights on for a minute or so before you thumb the starter helps overcome this. However in summer you have a whole new issue to deal with as the heat from the exhaust and rear cylinder roasts your legs! There are actually aftermarket heat shields you can buy to deflect a bit of the warmth! These two quirks aside, the Adventure is a reliable motor as long as you keep to its 9000-mile service intervals with the only real concerns the fuel filters, which can get blocked causing the bike to cut-out, and the occasional oil leak as it seems that the engine’ gaskets aren’t the strongest. The Adventure is one of those bikes that needs to be serviced by someone who knows their stuff to catch the small annoyances before they develop into something more serious – making it a bit like a Ducati in that respect. 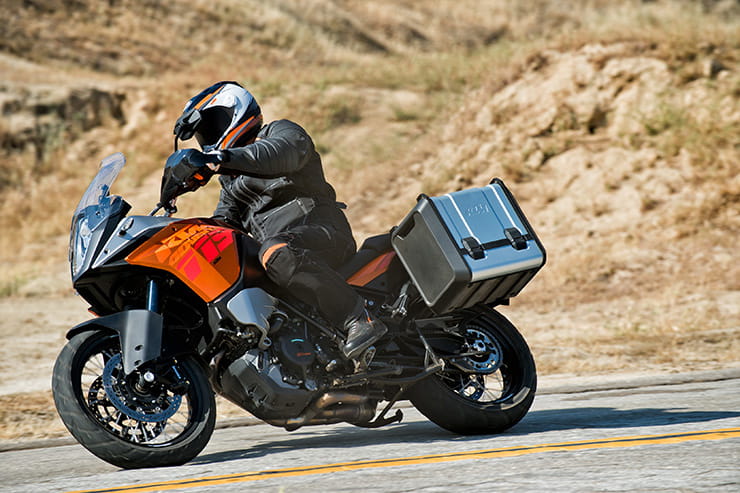 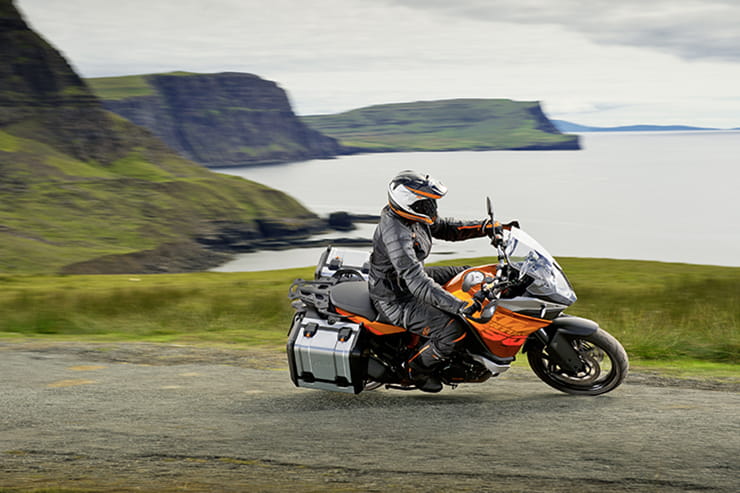 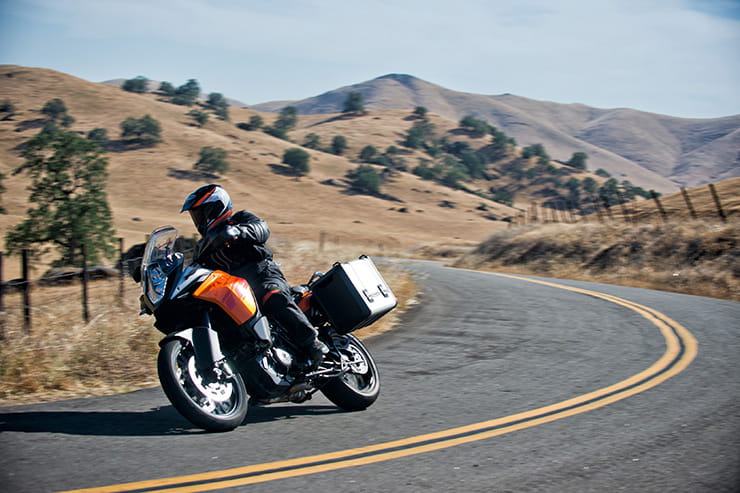 The 1190 isn’t a very thirsty motor and you should be able to hit mid to high 40mpg figures with ease, possibly even higher on motorway stints. That equals a tank range of touching the 250-mile mark, which is more than enough for most adventure riders.

KTM always look to inject a bit of a sporting edge in their motorcycles and the Adventure remains true to this ‘ready to race’ ethos. You can certainly hustle the 1190 down a road and while the WP suspension is quite long travel and therefore does like to pitch the bike about, it is fully-adjustable and excellent in its damping response so this pitching can be dialled out to a large degree through a bit of careful fiddling. Quite a tall bike (the seat height is adjustable between 860 and 875mm), when fully-fuelled with 23 litres of juice sloshing around it can feel fairly top heavy at slow speed but once on the go this sensation is reduced and bends are nothing to be feared. On a used bike just be a touch careful when it comes to the wheels as the Adventure runs tubeless tyres with a rubber ‘band’ that stops the air escaping past the spokes. On higher mileage bikes this band can degrade, leading to leaky wheels. It’s not a massively expensive part to replace (about £15 a wheel) but it seems that getting it as airtight as the factory managed back when the bike was built can be a bit of a nightmare with many owners reporting that it took a fair few attempts before success.

Twin Brembo monobloc calipers and 320mm discs ensure the 1190’s stoppers are more than up to the job! It’s not over-braked but it is certainly not left lacking. You get combined ABS but from 2014 the 1190 came with angle-sensitive combined ABS. The first production bike to have such a system (built by Bosch) as standard, it is well worth having as it is remarkable and a genuine life-saver should you be in a situation when it is required to react. An off-road mode deactivates the rear brake’s ABS. 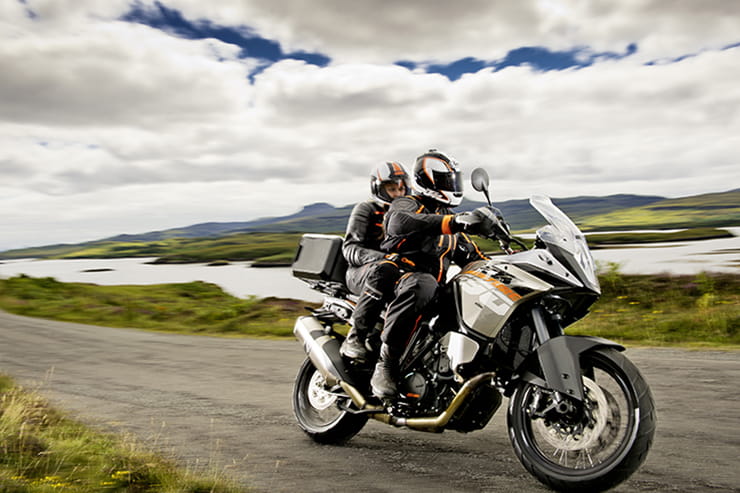 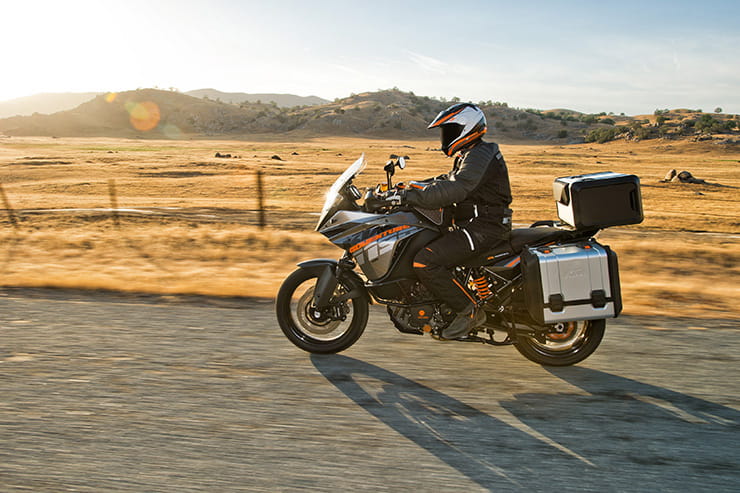 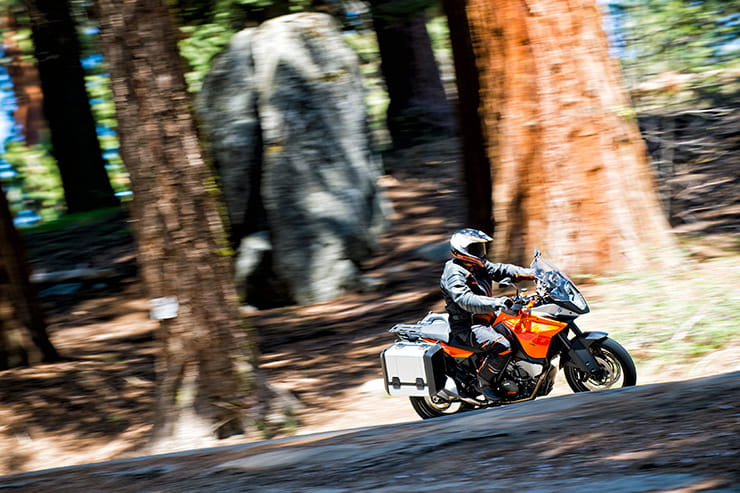 The Adventure seems to split opinions a bit in terms of comfort levels with some owners criticising its firm seat and others having no such issues, so try before you buy. If you want to smash out the miles the 1190 is a very good travelling companion with a large tank range, loads of room for a pillion and a huge array of luggage options available to swallow all of your kit. The screen could be a touch higher but this is a simple fix through one of the many aftermarket firms who supply replacements. Annoyingly, KTM didn’t give the 1190 cruise control, however there are a few aftermarket firms that allow you to retro-fit a system as it has a ride-by-wire throttle.

The Adventure has always had KTM’s MTC (multi-mode traction control), combined ABS (with off-road mode) and also four rider power modes (rain, street, sport and off-road) with electronic suspension (EDS) an optional extra alongside tyre pressure monitors (TPMS). In 2014 an IMU was added, bringing angle-sensitivity to the ABS and MTC, which is well worth having. In terms of accessories, many owners opt for a more comfortable seat, heated grips or a taller screen with hard luggage also very popular. As KTM riders tend to be quite ‘enthusiastic’ aftermarket exhausts are also common (mainly as the OE can looks like a dustbin) and so are auto chain lube systems as the KTM has a chain and not a maintenance-free shaft final drive.

The1190 Adventure isn’t most riders’ first pick as a big-capacity adventure bike, with many opting for the de facto BMW GS. Although not as unquestionably reliable or efficient as the GS, the Adventure has a certain charm about it and a more spirit ride thanks to its excellent V-twin motor that the BMW can sometimes lack. Owners really fall for the Adventure and if you want something a little different to do your touring on, try the KTM 1190 Adventure out.

Three things we love about the 1190 Adventure… 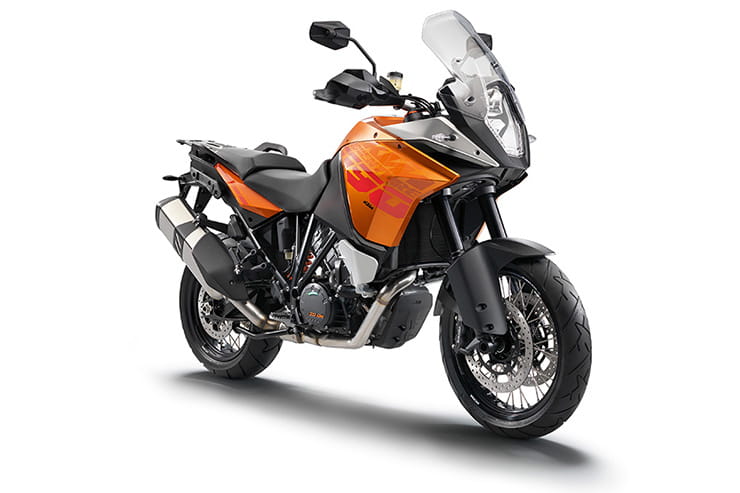 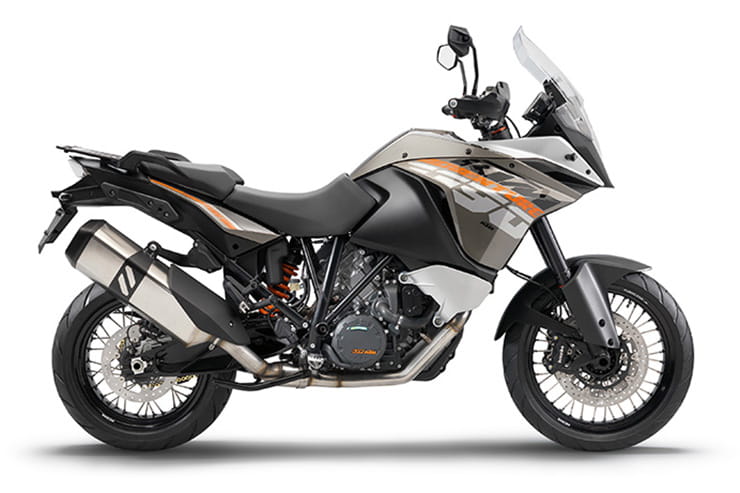 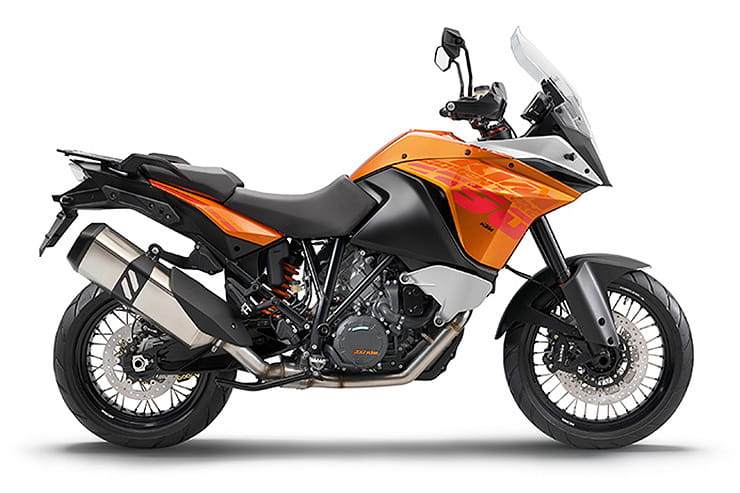