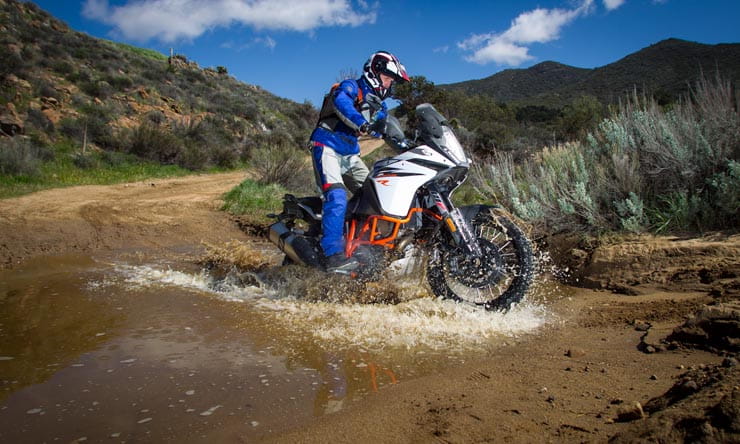 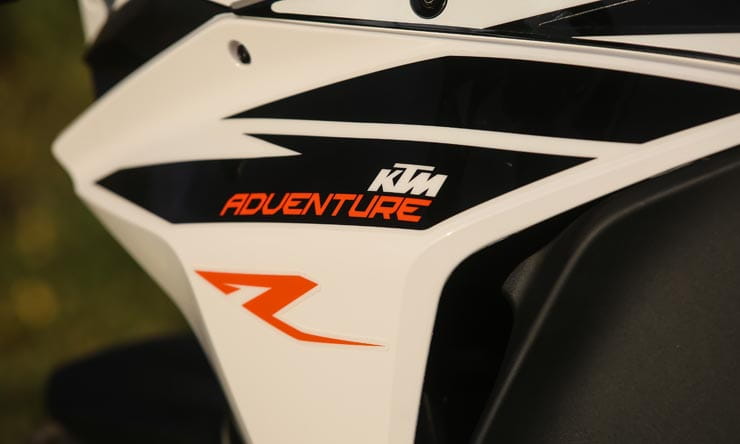 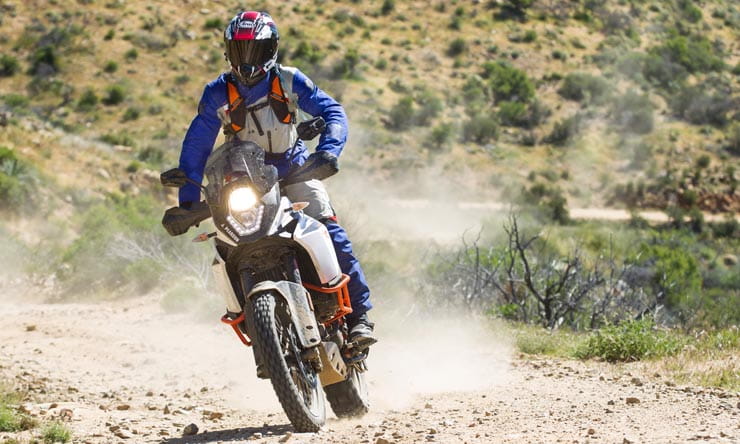 The latest addition to the KTM Adventure line-up, the 1090 R, promises more power, spoked wheels, better suspension and much improved off road potential…

From its original 950 Adventure in 2003, KTM has made a name for itself making the sportiest and most off road capable adventure bikes on the market. Stands to reason of course when you are the most successful manufacturer of off road motorcycles on the planet that you would make the most capable off road adventure bike on the planet too. It’s the very least we could expect.

The adventure bike market is obviously huge, in the UK and around the world the multi-purpose bikes are the biggest selling large capacity machines. KTM’s breadth of models in this adventure market has grown from that one 950, shifting to 990 before more recently the 1050, 1190, 1290 arrived.

The ‘R’ versions have always positioned themselves as the sportier, more off road capable model and it’s the same here with the new 1090 R. The R takes the 1090 Adventure with its well-ploughed furrow of steel trellis frame and V-75 LC8 twin engine and adds more power, stronger spoked wheels, a narrower and bigger 21-inch front tyre, crash bars and 220mm suspension travel – it’s a list which points immediately as much to dirt trails as it does to adventure travel.

You can spot differences between 1090 Adventure and 1090 R by colour as well as spoked or non-spoked wheels. The R is white and black where the standard model is orange and black and the basic price of £11,299 rises to £12,149 for the R sets them apart in showrooms also.

Overall feel and look of the 1090 R is familiar though, much like the 1050 and 1190 models of the last few years. Bodywork, switchgear, ergonomics, seat size and shape are all identical making a family connection similar to that which the likes of BMW does with its GS range.

Although the 1090 Adventure is an upgrade for the 1050 in KTM’s Adventure timeline, there was no 1050 R model so the 1090 R sits as more of a direct comparison (and replacement for) the 1190 R but with 150cc less. The 1190 R was a big hit in America, KTM USA’s biggest selling bike in fact – understandably so given the network of trails that exists in SoCal, which is where this launch was located.

The changes to the new bike are minimal between the 1090 Adventure but it is perhaps more meaningful to compare the other R models: it is less powerful by 24bhp but lighter by 3kg and £2k cheaper than the old 1190 R. Similarly the 1090 R is 10kg lighter, £2.5k cheaper but 35bhp less powerful than its mighty brother, the 1290 R. I hope you’re keeping up? 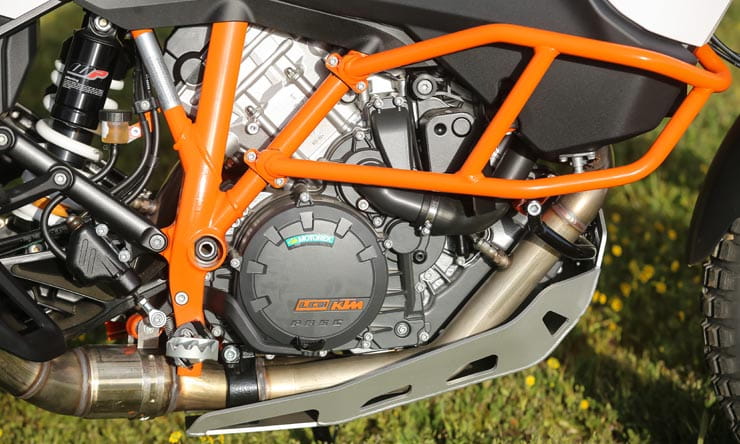 The new version of the LC8 engine has been reworked to meet Euro 4 standards but not, as previously, as an afterthought to meet the restrictions. This time around the engine and exhaust system have been designed to meet the EU laws from drawing board forwards.

The changes become apparent between the models when you open the throttle. There’s 150cc less than the 1190 R, ok, but a heavier crank and more responsive throttle make it seem not such a drop. On the road or trail the differences between 1190 R and 1090 R are hard to feel in all honesty. 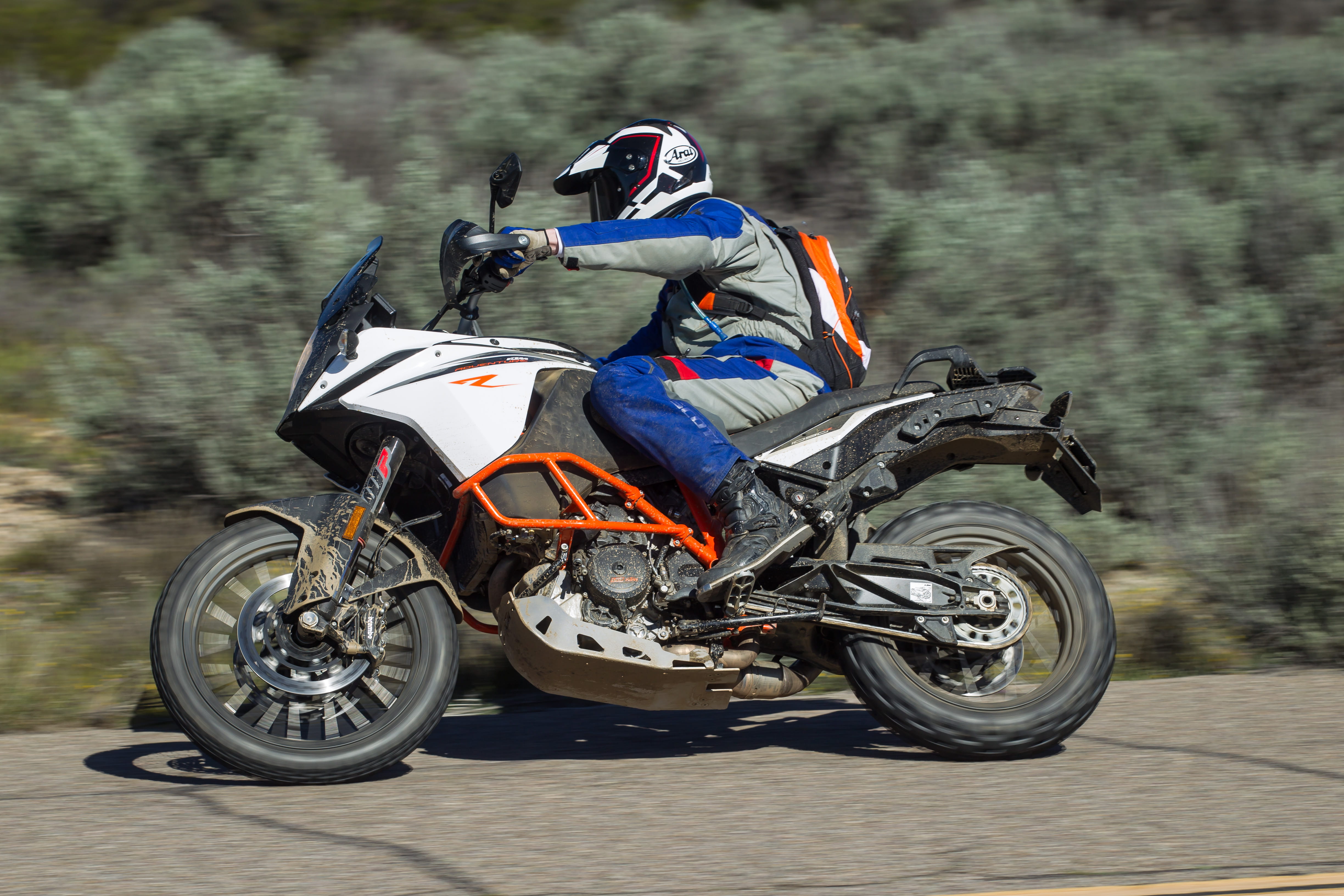 The electronics package on the 1090 R is similar to the 1090 S and 1190 R, which is to say normal and not exciting like the 1290 Super Adventure but better than some. The ride-by-wire throttle links to four different rider modes: sport (full power), street, rain and off road. Both rain and off road modes limit the power to 100hp but the electronics allow some drifting or rear wheel spin in off road mode. Sport is full power and it livens up the bike to the point of traction testing on the slower corners.

On the Southern Californian mix of roads we tested the 1090 R feels alert and lively in Sport mode and through most gears the engine is flexible and fast depending on your mood. The tall sixth gear is perhaps less flexible than some ADV bikes but as a consequence is a good cruising or motorway gear to carry speed with without needing thousands of revs.

Indeed, 125hp is a happy amount, lively enough on road but quickly too much too easily off road. Hence the different modes and off road mode in the dirt trails truly was a better option. Limiting the power to 100hp softens initial response off the throttle to allow small slides (unlike the rain mode) without allowing speedway-sized slides (like sport mode). If you can handle it the chassis certainly can but off road mode is certainly more civilised.

The Bosch ABS system works very well too, like many of the best current crop of ABS systems it is incredibly well developed to work under the most testing of conditions on and off road. It doesn’t have the more expensive and sophisticated system used on the 1290 models, there’s no cornering ABS here but it is very good and you have to try hard to test the ABS even on the dirt. The off road mode allows rear wheel lock-ups if you’re confident to use the rear brake in that way or you can turn it off altogether.

The new WP fully adjustable suspension front and rear is one of the 1090 R’s strongest assets. The 1090 Adventure’s suspension works well but is too soft if you want to ride harder, especially if you ignore KTM's advice and take it off road (its not designed for it although some mild tracks are ok). The old R models were always good off road but the what that WP suspension coped with off road translated to harshness on road. The 1090 R new and US developed WP kit is a decent jump forward in terms of valving and spring response in my view. Where stiffer off road used to mean too stiff on it, the new R model is firmer on road but still forgiving yet it copes incredibly well with harsh treatment on the rough going. Though not as technically sophisticated as the 1290 models’ active suspension, it is a good handling and versatile bike across a huge range of riding terrain. As such it also makes it a better handling bike on road too, if you're inclined to ride it more like a sportsbike than a tourer. 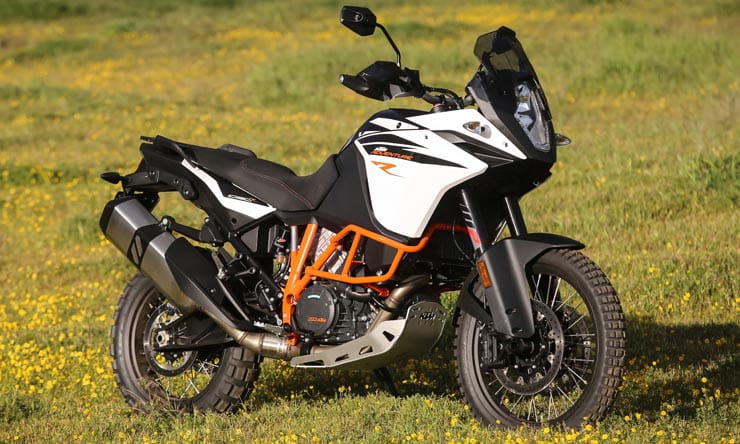 Rivals come in many shapes and guises and are hard to directly line-up. It is a rival to its 1090 Adventure sibling. At 900 quid more, the R is distinctly more versatile and useful because of its power and suspension. The Triumph Tiger 800 XCx is broadly as capable and a ballpark price comparison but it isn’t close to being as useful off road and the engine isn’t as strong on it. The Honda Africa Twin is potentially as good on the dirt trails but the engine, again, is not a patch on the KTM and really the spec of the suspension is not close either. The BMW GS 1200 Rallye? Hmm. Possibly. A rival in many ways but to make it perform as well as this on or off road you’d need to spend a significant amount on up-speccing the BMW. It’s an interesting comparison but the sport attitude of the KTM, particularly the suspension performance wins every time. The 1090 R either beats every one of its rivals or is in a class of its own.

The launch route deliberately took in a mixture of grippy Southern Californian roads, single track mountain lanes littered with rain wash and gravel and a huge variety of trails which took in everything imaginable. It was as good a test of an adventure bike as you could dream up and it is no coincidence this is also where the bike’s suspension was developed. It isn’t hard to understand why KTM Austria is increasingly using KTM USA as a valuable R&D arm for its adventure bikes.

Road manners are very much of the same ilk as any of the 1050, 1090, 1190 or 1290 models – but for the bigger tank the 1290 S too. The narrower front tyre size (21inch on the R compared to 19 on the Adventure) makes a difference, but a bigger difference off road where you need it. On road it obviously means a smaller contact patch but it doesn’t remove any confidence I felt in front tyre grip.

The handlebar and foot peg position is adjustable by 10mm respectively which makes quite a noticeable difference – so you shouldn’t be put off by the numbers. That all adds up to a slightly taller bike but it is natural position and having greater ground clearance (250mm) is almost a necessity if you’re intending to ride as much off road as on it.

Back on the road the 1090 R doesn’t provide the wind protection some of the bigger adventure models can with their bigger fuel tanks and larger screens. Though the 1090 R’s screen is quickly adjustable and deflects wind away from the helmet, the optional larger screen available as an extra would be my preference.

In fact there’s a decent range of aftermarket accessories including; panniers, nav-mouting systems, the 6mm aluminium skid plate you can see in the pictures and the fatter and longer footrests you probably can’t see in the pictures. The handguards, the same across many KTM ADV models, keep most the weather off the hands – heated grips as standard wouldn’t go amiss.

Some people want the off road look if nothing else – those spoked wheels are a draw and of course a lot of the aftermarket equipment available for the 1190 R including bigger screens, panniers, the substantial bash plate shown in these pictures and, though you perhaps haven’t spotted them, some incredibly good wider and longer footrests which made the task of standing up all day an easy one. Even if you never hit the dirt this bike makes sense because it hits all the right spots as a bona fide adventure machine (rather than a pseudo one).

The 1090 R has a more purposeful attitude if not look about it than its standard stable mate and that’s an important distinction. The 1090 R goes a step further and eats away at the concept of adventure travel in a way many of its rivals cannot muster because they are fake off roaders. They look the part but can’t handle the truth when asked to do it for real. Poor standing riding position, inadequate gearing, shoddy suspension, even shoddier footrests, heavy clutch, no steering lock – these things quickly get found out when you actually do take a bike off road and there are too many culprits in the Adv market.

KTM’s 1090 R has none of that, more than simply coping with the job it encourages it. An instinctively alert engine and some conventional suspension, which turns it into some sort of an all-terrain sports bike, takes this 1090 R away from the masses. Rather than faking it the 1090 R is the genuine adventure bike article.