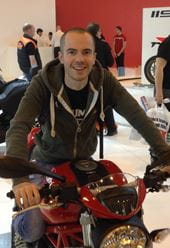 By Rich Taylor
rtt Rich passed his test 8 years ago, his first bike being a KTM 950SM. He spends most of his time in the saddle on the road on his Street Triple 675 R, but also likes to muck about on track on his '15 ZX-6R 636. 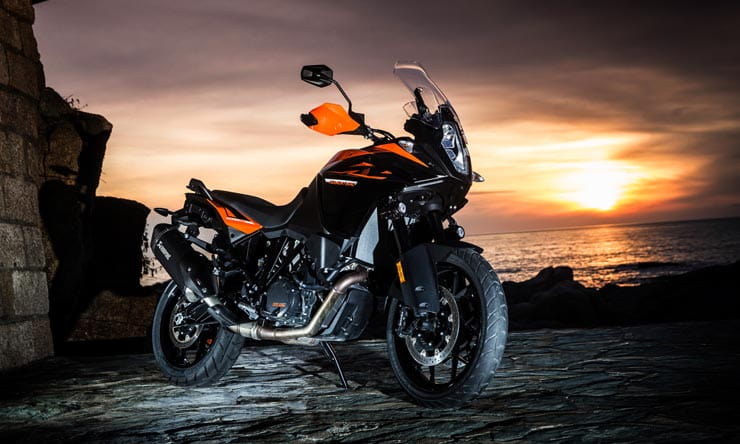 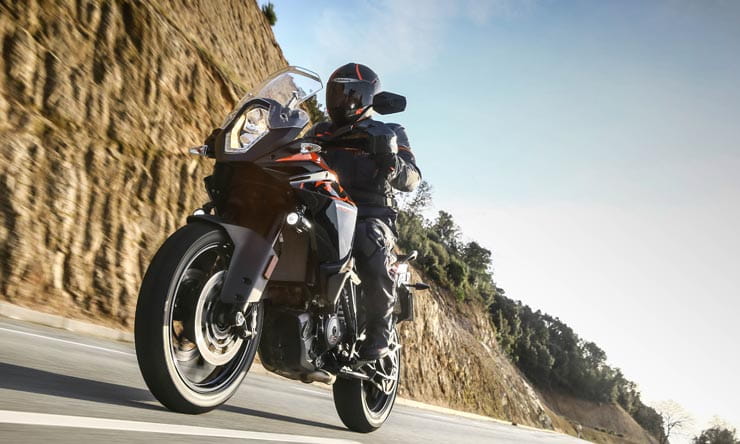 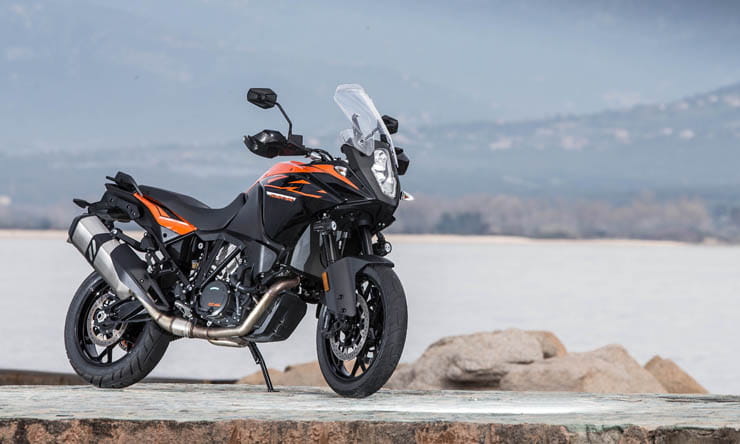 This year seems like a never-ending barrage of newly updated bikes and that’s largely down to Euro4 regulations coming into effect, requiring every new bike sold to adhere to stricter noise and emissions rules. Therefore, KTM has conjured up a refresh of their all-important entry-level Adventure bike, and so we welcome in the 1090 Adventure while the 1050 Adventure is put out to pasture.

It stands to reason that bread and butter models like the 1090 Adventure don’t often see radical change. More often than not the recipe will only receive subtle tweaks for fear of rocking the boat too much… and that’s usually a good thing. It explains why 1090 Adventure has not changed much from its 1050 Adventure predecessor, with the most significant update being an update to the motor. It retains its 1050cc capacity, but now kicks out 125 HP - a 30 HP increase over the 1050 Adventure - which puts it on an equal footing with BMW’s R1200GS in the power department.

Unlike the outgoing model, it’s no longer possible to restrict the 1090 down to 47.5 HP for those holding an A2 license via a re-flash of the ECU. Instead, there’s now a dedicated 47.5 HP version, which, according to KTM, cannot be unlocked to regain the 80 HP it loses over the regular model.

You might be wondering about the significance of the 1090 name, given it still has its 1050cc motor. The theme here is it shares a platform with its bigger brother, the 1290 Super Adventure. It has the same engine block but with a different bore and stroke (103mmx63mm vs 108mmx71mm), and has the same trellis frame chassis, too.

Compared with its larger 1290 Super Adventure sibling, it sheds 10kg to weigh in at 205kg (dry), and it achieves this by losing the TFT dashboard display screen, semi-active suspension, lean angle sensitive traction control and ABS, as well as the rather excellent cornering headlights, plus the six-axis IMU (Innertial Measurement Unit) that powers it all.

This weight advantage is immediately obvious, too, as we got to ride the 1290 and 1090 back to back in Corsica. We saw a huge range of roads; everything from fast, flowing sweepers to twisty and technical, to “roads” that were somewhere between disrepair and a gravel track. I found the bike feeling more and more alive the worse the road conditions got, riding the 1090 Adventure just like I used to ride my old KTM 950 Supermoto - a very good thing in my book - which speaks volumes for how communicative the chassis is.

Suspension on the 1090 Adventure is provided by WP. Up front is a pair of 43mm upside down forks offering 185mm of travel. They’re not adjustable, but the rear shock is, allowing preload and rebound damping adjustments alongside its 190mm of travel. While the lack of adjustability at the front will come as disappointment to some, the good news is that plenty of feedback is transmitted through the chassis and cast wheels to make up for it. Only sudden dips in the road could really show the suspension up. The stock Metzeler Tourance Next tyres impressed too, and were more than up to anything Corsica’s road could throw at them. Seat height is billed at 850mm, and my decidedly average 5’9” frame could get the balls of both feet on the desk (although, a few years spent on a 950 SM no doubt helped with learning how to handle a taller bike).

Mid-range is naturally where the 1090’s motor shines, and where the 1050’s 95bhp was described as “not mind blowing”, the 1090’s 125bhp is “much more like it”. While you’re not going to shame any sports bikes in a straight line, it’s still plenty enough to thrill and surprise you. Peak power is found at 8,500rpm and peak torque, 80 lb-ft, at 6,500rpm. Riding it, there’s a feeling of a wall of torque and it seems to have a revvy, eager personality. It spins up quickly and rewards you for giving it a constant supply of gears to munch on. It’s really good fun and it’ll reward you for riding it with a bit of attitude. You’re not just a passenger like you might perhaps be on the 1290 Super Adventure, you can really ride this bike. Fuel economy came in at around 44mpg, meaning its 23 litre tank will carry you around 220 miles.

Fuelling is nigh on perfect, with no snatchiness at all during low speed manoeuvres. On Corsica’s tight and twisty mountain roads, a number of times I found myself wincing, wishing I’d shifted into first gear rather than sticking with second as we negotiated various slow, switch-back hairpins. But it was fine - the 1090 pulled through each and every time with zero hesitation or chain clatter as the revs dipped down low each. A good number of times I said out loud to myself inside my helmet “whoever figured out the gear ratio for second gear really knew what they were doing”. 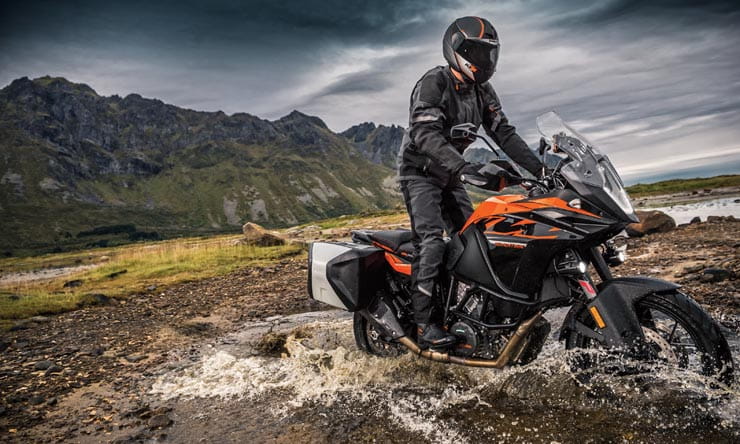 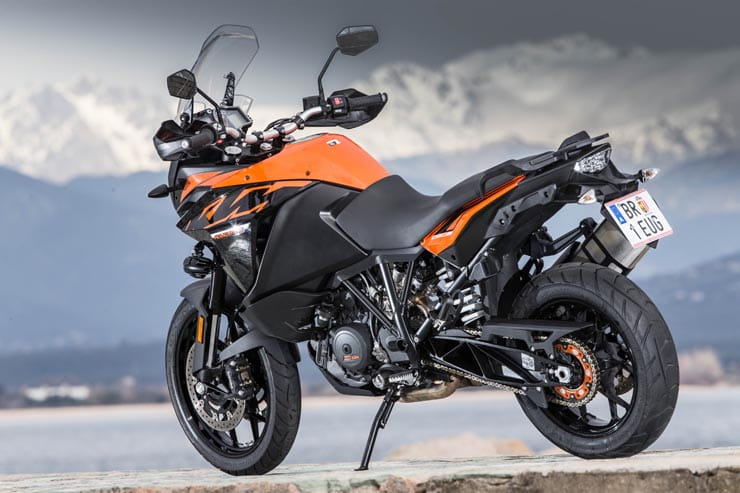 Just like the 1050, the 1090 has three rider modes: Sport, Street and Rain, which adjusts throttle response and traction control levels. Full power is available in every mode. An extra Off Road mode can be unlocked as an optional extra which allows the rear wheel to be locked and adds a more manageable throttle response.

The only real wart that the 1090 Adventure has is the rather low-rent LCD dashboard. I will accept we were testing the 1290 Super Adventure S with its all singing, all dancing 6.5” TFT display back-to-back with the 1090, but the green backlight and low resolution dot-matrix LCD does feel a bit ‘90s bedside table alarm clock. It’s dead easy to use, so there’s no fault there, but somehow it feels like KTM could have tried just a wee bit harder.

If you’re in the market for a 1090 Adventure, you’re no doubt considering an overwhelming number of bikes. What does the 1090 Adventure offer you? It offers a cracking motor, a chassis with bags of character and ability, fantastic finish and build quality, and a practical ability to do just about anything. It’s also incredible value at £11,299 - it's a lot of bike for your money. The strength over its competition is its personality and vitality - some of the other options are, well, a bit dull. The KTM is everything that dull isn’t. 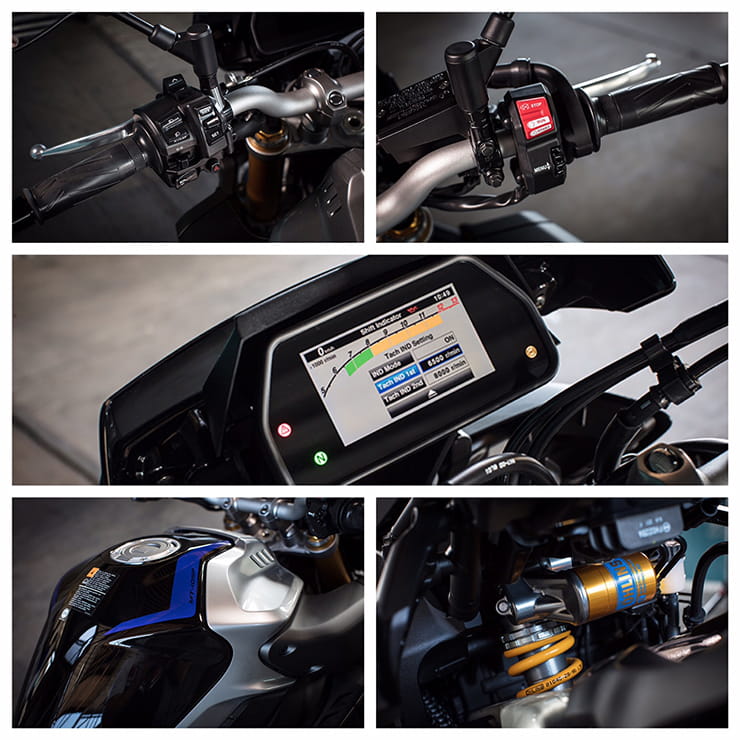