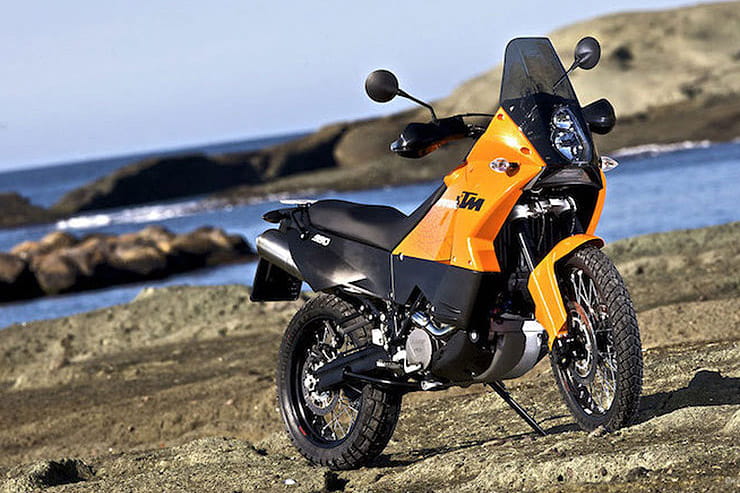 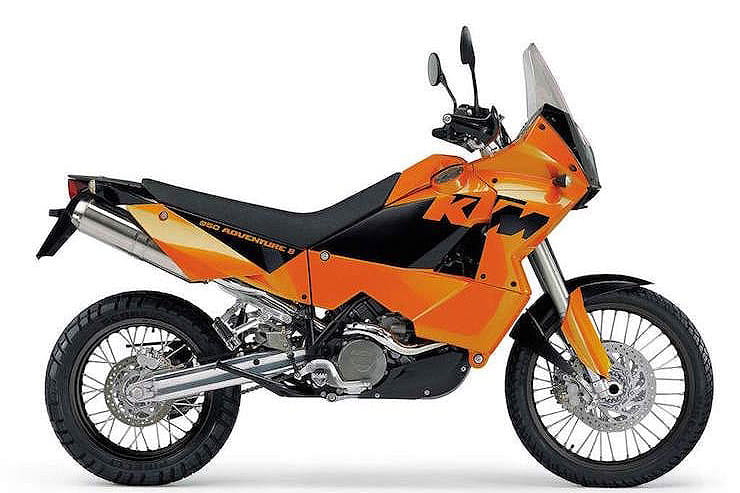 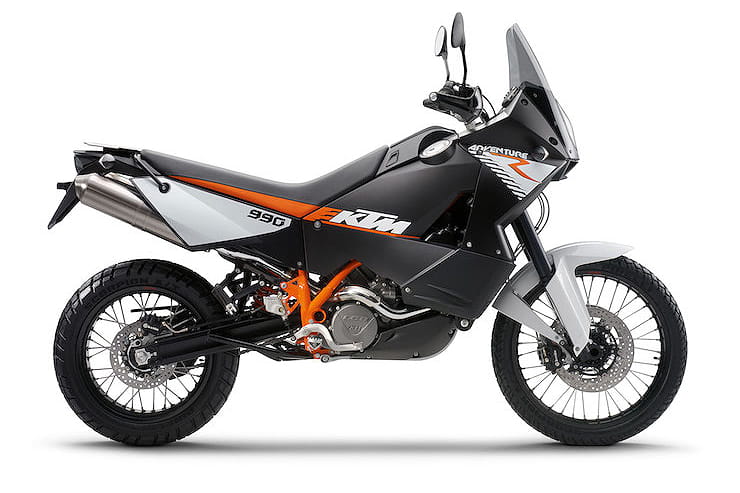 If you are after an adventure bike but don’t like the stigmatism attached to owning BMW’s ubiquitous GS, then the KTM 990 Adventure will be right up your street. Not only does it come bursting with KTM’s aggressive attitude, it has genuine off-road potential and a price tag that is actually fairly reasonable considering its specification.

There is a surprisingly large number of used Adventure models out there, but in general they are the more popular 990 model as the 950 only sold in limited numbers in the UK. A used 950 should cost you roughly £4,000, but despite people going all misty eyed over carbs, the injected machine is a better bet. An early first generation 990 can be yours for between £4,500 and £5,000 from a dealer if it is well used, however it is better to hold fire and get the updated 2009 model if you can afford the extra £500. The later 2009 bike’s prices start at £5,500 (dealers try and get this figure for low mileage first generation bikes) and peak at £6,500 for a last generation 2011 model. Far fewer S and R models made it to the UK than stock Adventures, meaning their exclusivity and higher spec will cost you roughly £1,000 more, especially if it is a Dakar edition. 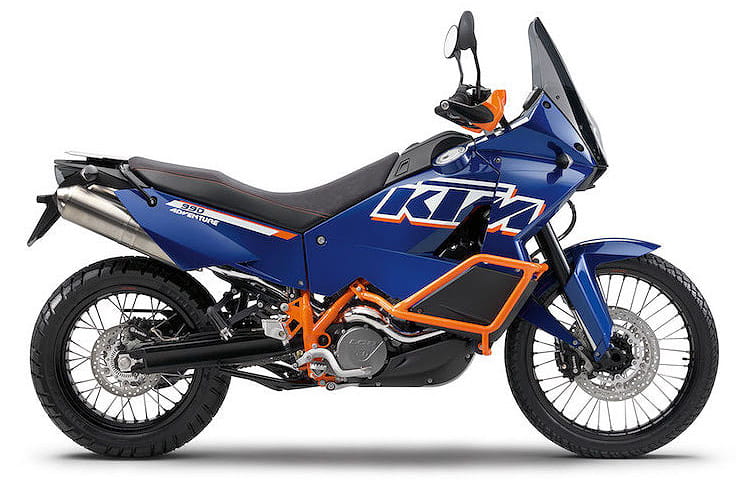 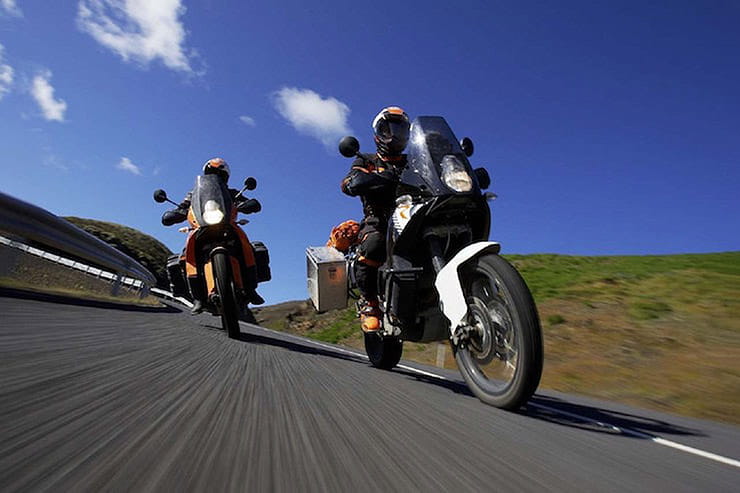 The Adventure first appeared in carbed 950 form using a 942cc version of the LC8 engine. This was soon joined in the model range by a more off-road orientated ‘S’ model which had longer travel suspension, a tall 920mm seat height and no ABS. In 2006 the 950 grew into the 990 with its 999cc engine now boasting fuel-injection instead of carbs and 98bhp. This motor was updated in 2009 (now 106bhp) with the ‘S’ renamed ‘R’ and gaining a more powerful 116bhp version as well as its suspension upgrades. In 2011 this higher specification motor found its way into a Dakar version before a year later being used in the standard 990 Adventure before the bike was replaced by the all-new 1190 Adventure in 2013.

In general the Adventure is a reliable bike, but it does have a few well known quirks that you need to keep on top of. The clutch slave cylinder is a weak point on the 950 and its seal often fails, causing fluid to leak out. A few 990s have also suffered from this issue. Checking the oil level on the KTM’s dry sump requires a different technique to a traditional wet sump and this can lead to over or under fill issues. The LC8 engine needs its valve clearances checked every 9000-miles, which adds to the service bill, and there are a few electrical gremlins to be wary of. Pre-2009 fuel injected bikes can get confused if you push the starter before the bike has run its diagnostic check, causing it to fuel roughly. Sorting it simply involves letting it tick over for a while (look on the forums for the exact technique) and there are occasional reports of fuel pump failures and various sensors going down. 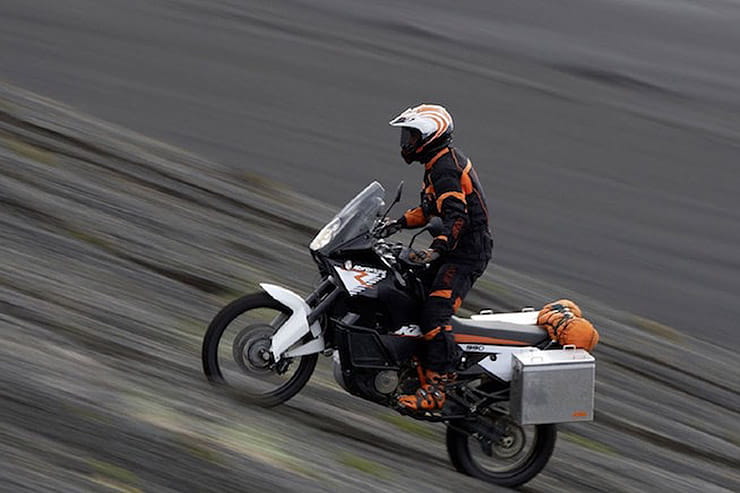 Although a fairly punchy, aggressive V-twin the KTM Adventure’s LC8 75-degree V-twin is fairly average when it comes to fuel economy. Low to mid-40mpgs are typical – more with general cruising, less if ridden hard, with the big tank capable of returning up to 200 miles.

Whichever model you go for the Adventure is a tall bike, suiting taller riders, although this is balanced out by being fairly slim and light. Street handling is surprisingly good, although the big off-road wheels and long-travel suspension take some getting used to. The suspension, in particular, is excellent, both on and off-road while compared to, say, a BMW GS, is seems more nimble and lithe. 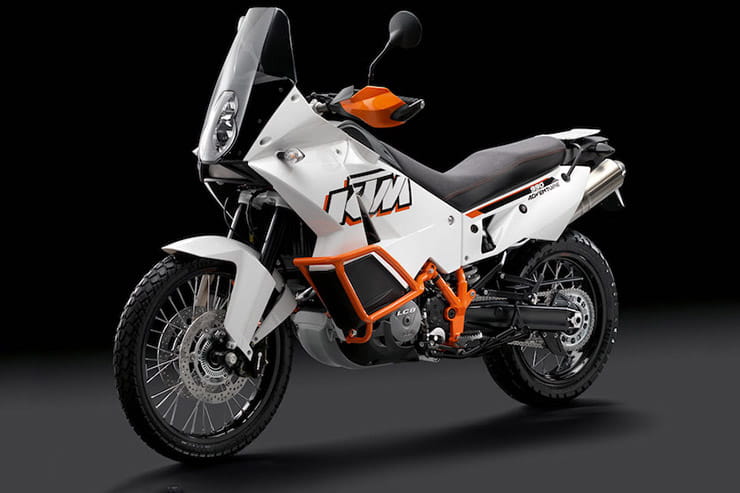 The twin front discs, aided by ABS, are good rather than exceptional, although in truth they’re compromised more by the large, narrow, knobbly-fitted front wheel rather than any lack of braking power. Off road they’re sharp and precise.

The Adventure is a big, tall, upright adventure bike with a fairing that does make a difference so makes a decent long distance bike. That said, it’s not quite as plush or cossetted as a GS, it’s taller and narrower and also harder and less sumptuous (many owners recommend KTM’s own comfort seat accessory) and it’s noticeably more crude and more basic as well.

As you would expect on such a bike, aftermarket firms as well as KTM themselves are more than happy to kit you out with panniers, lights and all the gubbins required to travel the world. So while the Adventure has sold in far smaller numbers than the GS, meaning it remains a bit unique, it still manages to tick all the right practicality boxes. 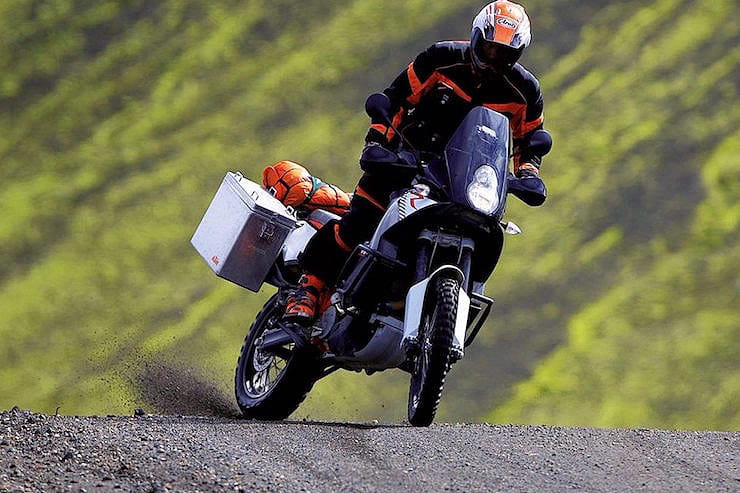 Few realise this, but the Adventure has actually won a Dakar Rally. In 2002, Fabrizio Meoni took the win on a prototype 950 Adventure, just a year before the road version was launched and before Dakar banned large capacity bikes. But will many KTM Adventures ever venture off-road? Despite the fact more KTM owners do actually take to the trails than BMW owners, it is still a very limited number and although it is more than competent on the rough stuff, most Adventures spend their time touring. Which is no bad thing…

It may not be quite as relaxed as the BMW, but the KTM is still a very good tourer with a bit more spirit than the GS thanks to its V-twin engine. The seat can be a touch firm when compared to the Beemer, and it lacks the practicalities such traction control or electronic suspension, but KTM were keen to ensure their Adventure bike had a sporting attitude and as such it handles far better than its large spoke wheels suggest. You can hustle an Adventure down a tarmac road and its top-quality suspension and sorted chassis ensure you won’t feel like it is getting tied up in knots. Then, should you spot an open fire track or off-road path, the Adventure is more than happy to take to the dirt.

Three things that we don't…