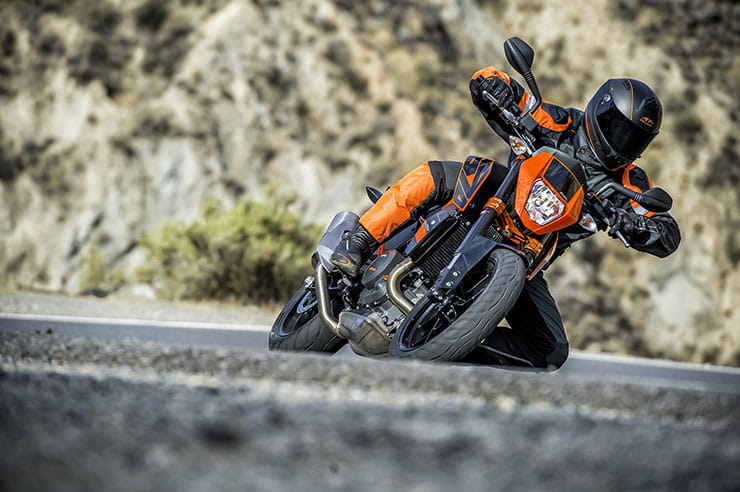 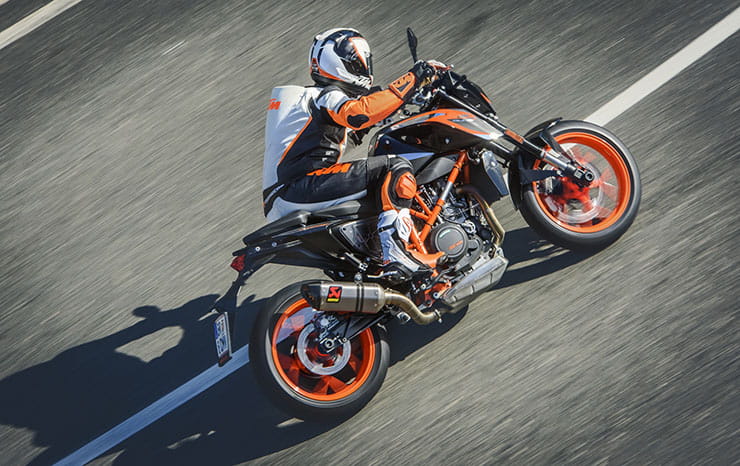 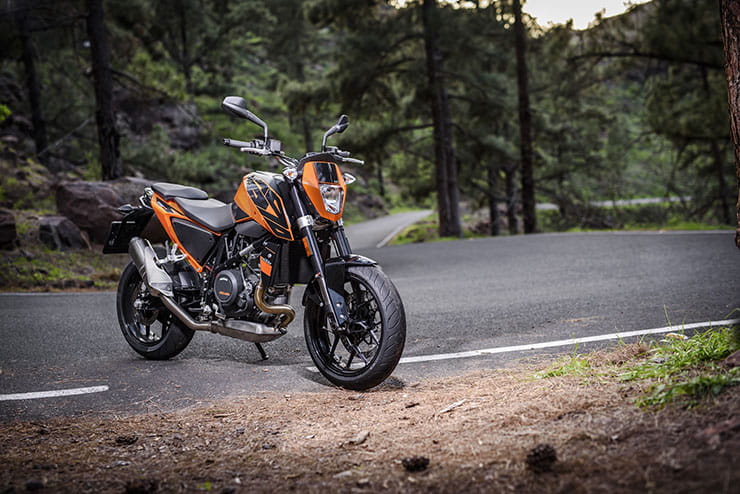 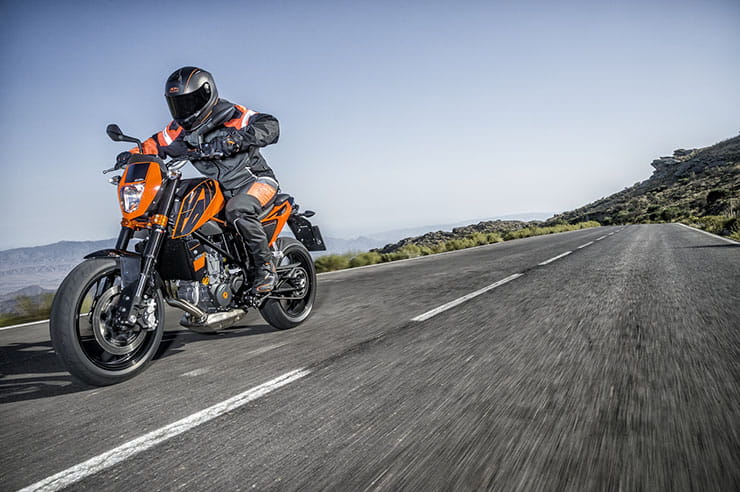 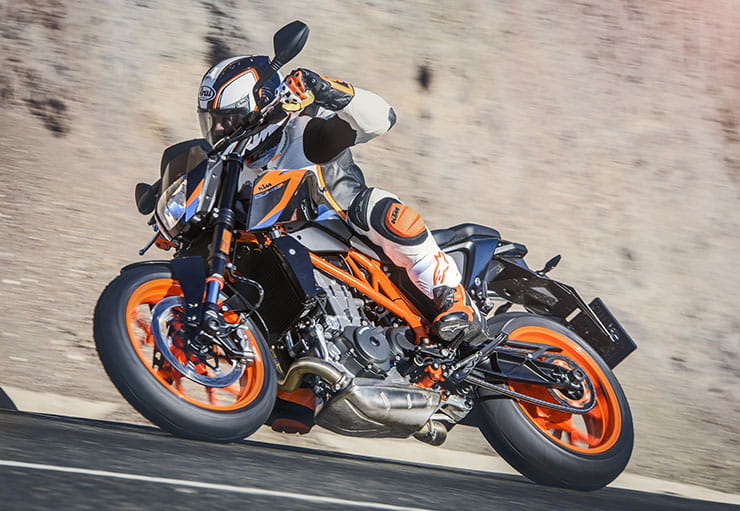 KTM’s middleweight Duke model has come a long was in its life. Starting off far more as a naked bike heavily crossed with a supermoto back in 1994, the Duke has evolved and grown as the years have passed not only in performance but also technology and its role in life. In 2012 it matured into a predominantly naked bike and lost its supermoto influence before its final incarnation was released in 2016, the most high-tech Duke to date that sat alongside an even higher-spec R model. Replaced in KTM’s model range by the parallel twin 790 Duke in 2019, the 690 Duke remains the most impressive use of a single-cylinder motor in a motorcycle to date and is a bike with a huge cult following. If you want a lightweight naked bike that guarantees grins, the KTM 690 Duke won’t disappoint. And the R model is even better fun! Although there is a price to pay...

Price has always been the 690 Duke’s Achilles’ Heel and riders found it a bit tricky to justify spending £7699 on the base model Duke or £8999 on the R version when rivals such as the Yamaha MT-09 or Street Triple were far cheaper and even the Street Triple R £1000 less than the Duke R! Do the used prices soften this blow? To be honest, not really. Prices for a base model 690 Duke start at just under £5000 with the R model costing closer to £6000. For a four-year-old bike, that is still a lot of cash. The top limit is £6500 for a base model 2019 bike and £7500 for the R, but to justify these prices they need to be very low mileage bikes.

Some riders see the Duke is powered by a single cylinder and assume that it will be a vibey, agricultural lump that is slow-revving and lacking in power. Nothing could be further from the truth. The Duke’s single is really smooth and refined and also seriously powerful, producing 73bhp (75bhp in R form) with 54.6lb.ft of torque. Thrilling to ride and also really happy to rev, the LC4 motor is a thing of great beauty and if you like to work an engine and be rewarded with a ride that is enormously engaging, the Duke 690 is for you. And thanks to its flat torque curve, it can also be ridden gently without too much tap-dancing on the gear lever - but that’s nowhere near as much fun...

In 2016 KTM gave their LC4 motor a serious update and as well as boosting power by 7%, upped the torque by 6%. This was achieved through a revision of its bore and stroke (3mm larger bore but the stroke was reduced by 4.5mm to keep the same 690cc capacity), a new piston, crank, redesign of the head (the single cam now directly operates the intake valves with the exhaust valves operated via a rocker and it also doubles up as a second balancer shaft) and a slipper clutch added. To feed this engine is a new ride-by-wire throttle system with a larger intake (up from 46mm to 50mm) and the associated electronic assists that this brings with it such as power modes and variable engine braking control. And if you bought the R model, a free-flowing Akrapovic end can added 2bhp of extra zing to your Duke. When you look at this spec list, the Duke does go a long way to justifying its price tag and the level of build quality (everything was built in Austria at this point) and technology within the motor is incredibly impressive. And robust! There are no horror stories associated with the 2016-onwards Duke models and owners report that despite the fact they tend to get revved quite hard, the engine is bulletproof and the level of finish excellent. Service intervals are every 6000 miles, which is pretty impressive for such a powerful single, and although it does involve a valve clearance check, as there is only a single cam and the bike is so exposed this doesn’t add much to the bill. Expect to pay roughly £250 every 6000 miles, which is acceptable as most Dukes don’t cover a huge annual milage so really you are looking at a basic oil and filter change and the proper service every two or so years. 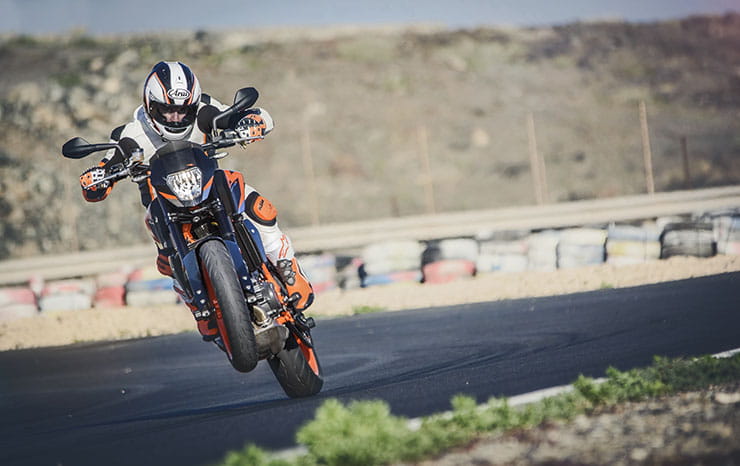 Fuel economy on the single depends very much on how you ride it and owners report it varies from 40-55mpg. Assume roughly 50mpg and you won’t be too far off the mark. As the Duke holds 14 litres in its tank, that gives you a range of roughly 150 miles until you run dry.

Thanks to their light weight (148.5kg dry for the stock model, the R is1kg less) the 690 Duke models are absolute whippets in the bends. Brilliant fun on twisty roads where you can exploit their handling, the Dukes are the kind of bikes that make you want to get up on a sunny Sunday morning for a pre-breakfast blast. As you would imagine, the R model is the better handling of the two as it comes with fully-adjustable WP suspension where the base bike’s WP units lack much adjustment. If you are a road rider the 690 Duke has more than enough handling for you to get your cornering fix however on track the R’s 15mm of extra ground clearance (it sits higher on its suspension) counts. Away from the corners the Dukes are perfectly happy in town and easy-going (the R has a 30mm taller seat height but in reality, it isn’t that noticeable as the bike’s waist is so narrow) so are more than happy to be used as urban commuters. But where’s the fun in that...

Both 690 Dukes come with a Brembo four-piston radial caliper and radial master cylinder however the R model ups the game through an M50 monoblock caliper, which is noticeably better performing when used hard. Although ABS is standard on both bikes, the R model not only adds angle-sensitivity, it also comes with ‘supermoto’ mode as standard, which deactivates the rear brake’s ABS to allow you to do skids. If you want to pull skids on the stock 690 Duke, it can be added as an optional extra... Although the Duke only has a single front brake disc, both bikes have more than enough stopping power, although if you take to the track regularly, the R’s Brembo is worth having as it delivers more consistent performance when pushed hard. 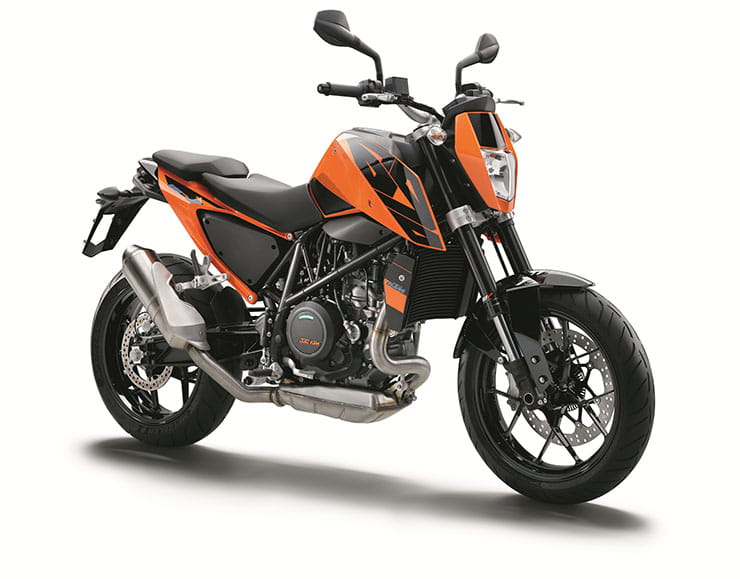 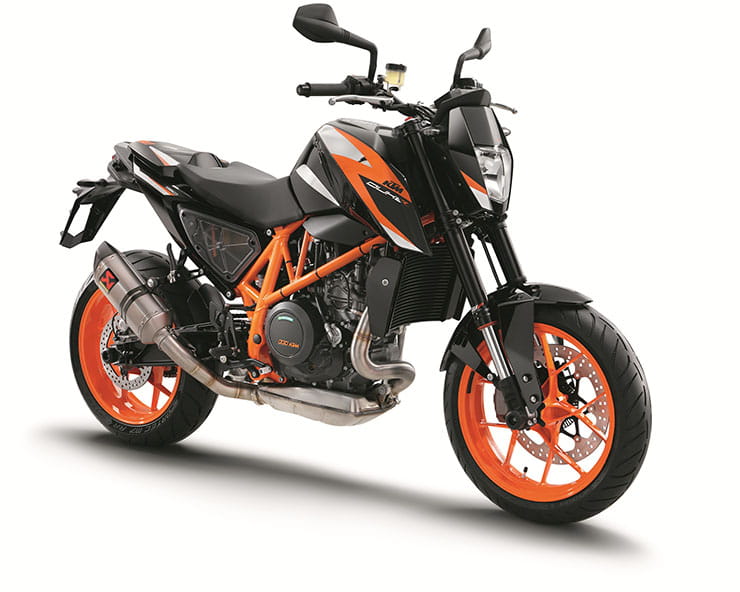 Although the single cylinder motor is remarkably vibe-free, you wouldn’t want to take a 690 Duke touring due to its compact nature and lack of wind protection. This is a bike for short hops rather than weeks away. Also, the seat is a bit firm.

To be fair to the 690 Duke models, they do come with a fairly decent spec list in terms of their electronics, although the R is by far the better buy. As standard both the stock and R models get ABS and traction control, however the R ups the game by adding angle-sensitivity to both systems (it can’t be retro-fitted to the stock Duke). The R also gets ‘supermoto’ ABS mode as standard, which allows you to skid the rear, alongside MSR (engine braking control) as standard while these are options on the base bike. The base bike also only gets ‘street’ riding mode as standard where the R adds ‘rain’ and ‘sport’ which are available as optional extras on the base model. Both bikes have a TFT dash (connectivity is extra) as standard. In terms of extras, KTM sell a host of bolt-on Power Parts such as rearsets, suspension upgrades (for the base bike), billet parts, an Akrapovic can (standard on the R), revised gearing sprockets, tyre warmers, crash protection, mini-indicators, a tail tidy, the list is fairly extensive. A lot of owners go for crash protection and a loud exhaust but that’s about it aside from visual upgrades such as the tail tidy or wheel rim tape. You can get a more aggressive cam, but that’s not a great idea as it makes the actually really refined Duke a bit too punchy for road use. Generally, when it comes to 690 Duke ownership, fit sticky tyres and just enjoy it!

The Duke isn’t particularly practical, and it is a touch limited in its appeal, however if you want a really good fun bike for backroad blasts that comes with an excellent chassis, good array of modern assists and bags of spirit, the Duke ticks every box and the R is even better. Although it is a bit hard to justify spending so much money on ‘just a single’ the Duke, and especially the Duke R, really are wonderful bikes to ride when the mood takes you. 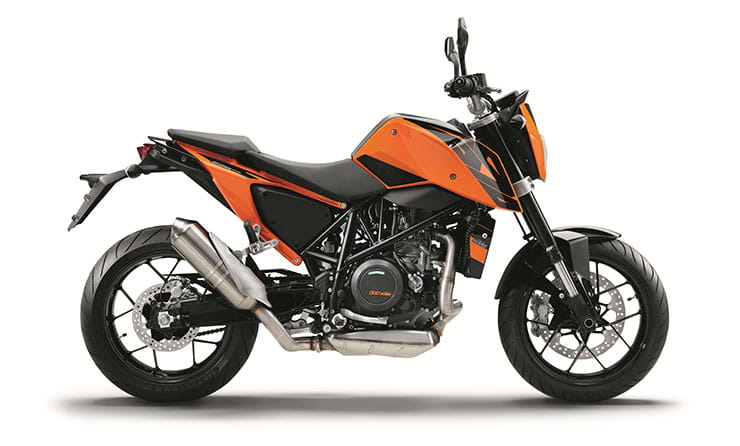