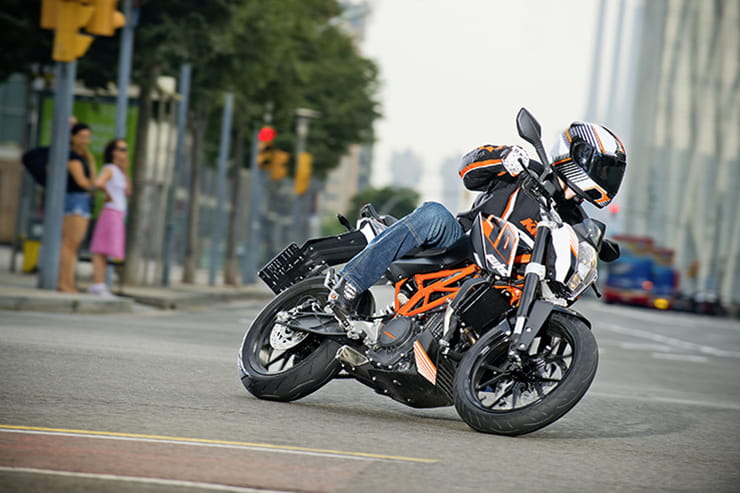 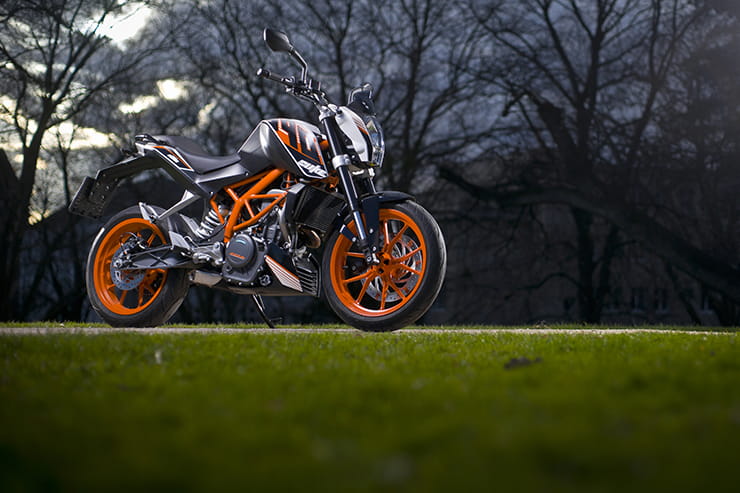 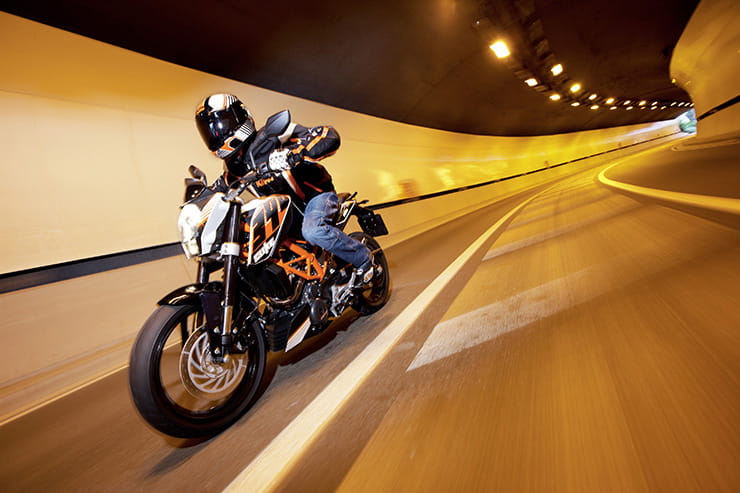 Having smashed it out of the ballpark with their Indian-built (by Bajaj) small capacity 125 and 200 Duke models, in 2013 KTM upped the ante by releasing the 390 Duke. A machine far more aimed at European riders than the 200 (this was quickly discontinued in Europe), the 390 Duke’s trump card was the fact it borrowed the 125’s platform and was basically identical bar an all-new bigger-capacity single cylinder motor. A2-legal, light and fun to ride, the very competitively priced 390 Duke has been popular but not quite as much of a sales sensation as the 125 Duke, which stormed to the top of Europe’s best-sellers list and has basically stayed there ever since! If you are after a lightweight town bike that is fairly economical and fun, the 390 Duke is a good option that has funky modern styling and a pleasing bit of KTM attitude. It’s not perfect and there are a few stories about unreliability, however in general if you get a good one, owners seem to be fairly happy with them.

Producing 44bhp with 25.8lb-ft of torque, the 390 Duke is quite a spirited performer but it does thrive on revs and ideally you need to be above 6000rpm to get the motor singing. Do this and it is more than fast enough with 100mph achievable given a bit of a run up. While it can be ridden at lower revs thanks to the single’s low-end torque, the throttle response on this first generation isn’t great and it can be a bit snatchy when you are getting back on the gas, which is a shame, but it doesn’t really spoil the party too much. Overall, it’s an engaging and fun motor but does prefer to be thrashed, a trait that will either appeal to or really annoy you! There again, what do you expect on a small capacity single?

Unlike the 200, which is basically a big-bore 125, KTM gave the 390 a ground-up new engine. The DOHC, 4v, single (which weighs just 36kg) shares a similar basic design to the 125/200 however internally it comes with a Nikasil coated cylinder, forged piston and other enhancements to allow it to increase in capacity and power. A few owners report the engine can leak oil (not uncommon on KTM models...) with the rocker cover the main weak area and there are also more worrying reports of the gearbox throwing in the towel, which would probably write the bike off as it costs so much to fix. Electrical issues are not unheard of with solenoids, sensors and the like breaking, so always check well for warning lights and also if it starts up when hot – another reported issue with the 390 Duke. And cold, that can also be a problem... Weirdly, owners also say the chain wears out at an unusually fast rate, but this is more likely down to a cheap OE fitment unit than an issue with the bike itself. KTM modified the gearbox on the second generation of Duke, making it far slicker as it is quite notchy on the first generation, but this isn’t a massive drama, and the clutch is lovely and light for town work. Complaints about finish pop up regularly on KTM forums with the various fasteners and nuts and bolts coming in for criticism, so you are advised to use anti-corrosion spray liberally in winter. And summer! Also be wary of bolts vibrating loose (sidestand mounting bolts are a common one) – if they do, try a dab of thread lock to ensure they stay done up in the future. Servicing is every 4500 miles or yearly with bills of between £150 and £250 about average. The valve-clearance service is at 9000-miles and adds about £200 to the overall bill. If you want to do the oil and filters yourself, a service kit costs £30 and is an easy job for a home mechanic to complete. 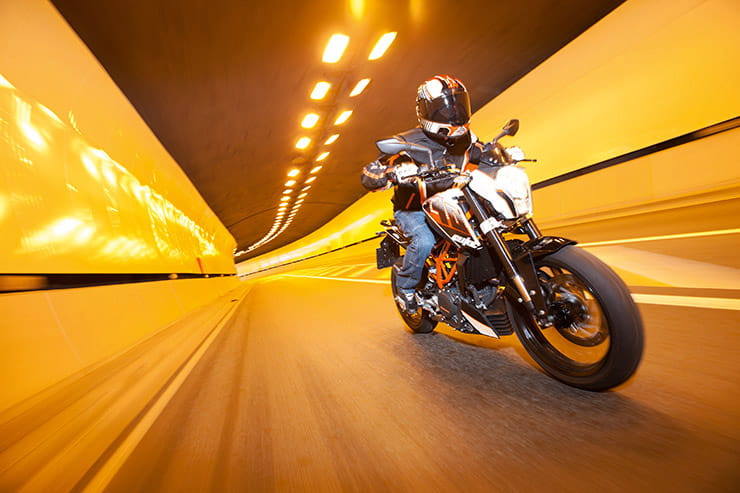 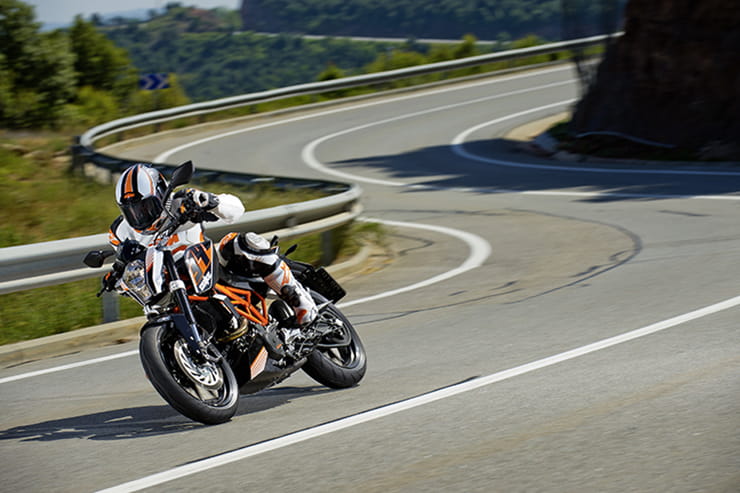 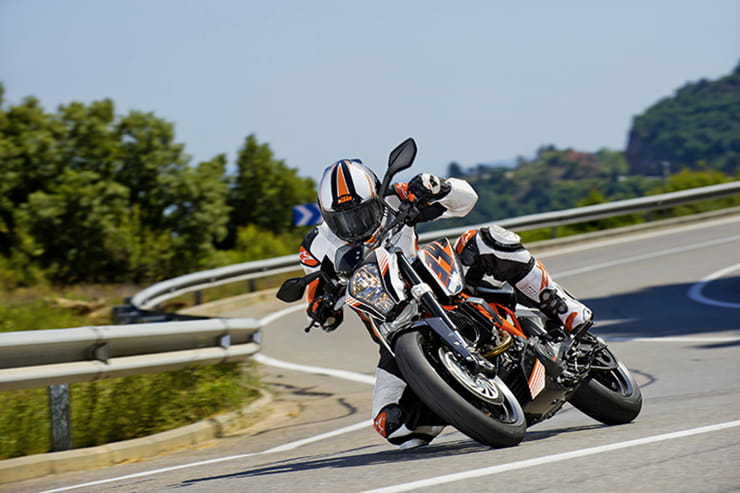 You can reasonably expect to record 60mpg-area figures on the Duke, giving it a tank range around the 130-mile mark. Obviously, this is very much dependent on the thrashing you give the little single motor...

Tipping the scales at just 139kg dry (so realistically 150-155kg wet) the 390 Duke is a real lightweight, which is exactly how it feels to ride. As its chassis, wheels, brakes, ABS system, suspension, tank, seat, clocks, swingarm, everything is identical to the 125 the 390 feels like a 125 on steroids and drops into bends with minimal effort and is ultra-easy to haul around when in a city at low speed. Pleasingly, KTM revised the WP suspension’s internals for the 390 and also armed it with higher quality Metzeler Sportec M5 tyres, which makes a big difference. Just because it is low powered don’t be tempted to fit poor quality tyres, you will regret it the first time it rains! Despite being quite small and compact, the Duke isn’t too cramped for taller riders and does feel quite ‘big bike’ in its riding position, although the seat is fairly firm. Aside from the usual checks for crash damage, corrosion and the suspension starting to require a refresh, there isn’t much to worry about in terms of the 390’s chassis. Owners do grumble the plastics are a bit flimsy and logos can peel off, so look for broken mounts, and also check the lightweight wheels (which were changed for orange before the bike arrived in the UK but after the press images were taken, which is why they are black) for dings, they were actually made more robust on the updated model.

The 390 Duke runs the same single four-piston ByBre radial caliper as the 125 Duke, which is no bad thing and you get a braided line as standard. ByBre is a sub-brand of Brembo so the performance is there and to be honest you don’t need much more on a bike as light as the Duke. ABS is standard fitment on all 390 Duke models and there is even a hidden switch on the dash that allows you to turn it off and do skids! It’s not as cool as the updated model, which also has a ‘supermoto’ mode to disengage the rear but not the front ABS, but it’s a neat (and a bit pointless...) touch. There is little to worry about from the Duke’s front end and although some owners reckon it could do with more stopping power, a swap of brake pads is realistically all you need to do to restore a bit more bite to the system. As the bike is getting a bit old now, check the caliper well for sticking pistons, especially if it looks like it has been ridden in winter, by getting the front in the air, spinning the wheel and listening out for any drag. 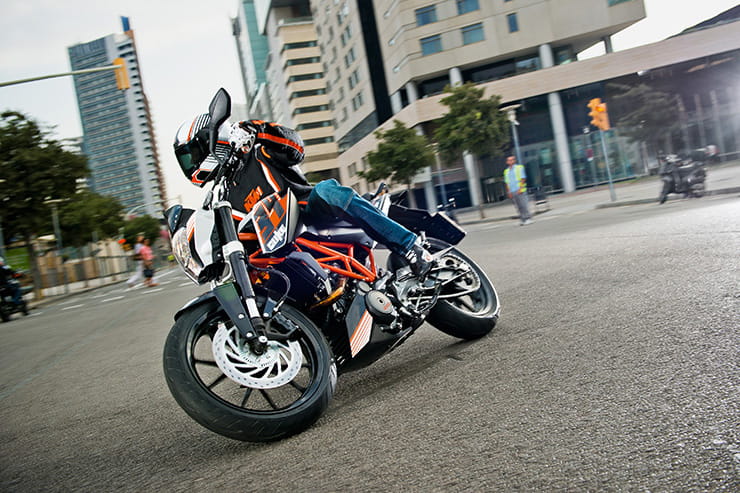 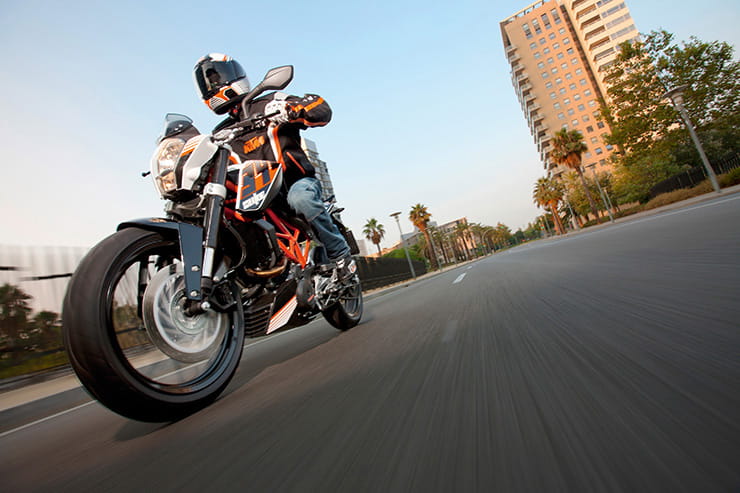 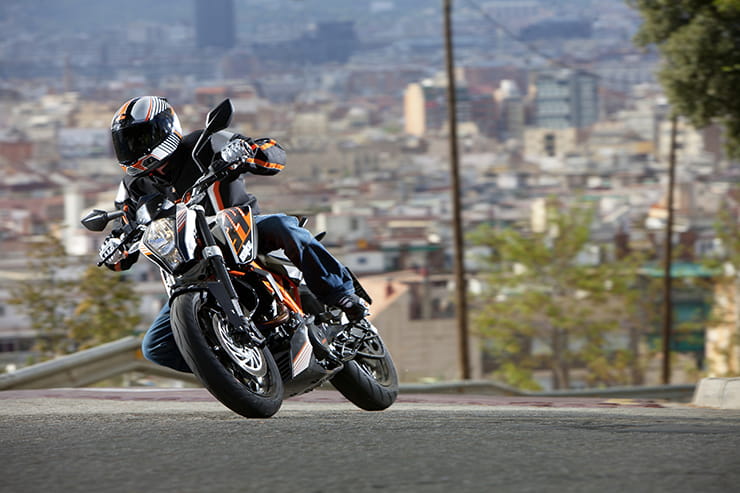 The Duke is a naked bike so you can’t expect too much in the way of touring ability. A few riders fit a small screen to deflect some of the windblast but it’s small, narrow, a bit vibey and the seat is quite firm, so it’s not great for covering distance on. If you are looking at much more than short hops or weekend blasts, try the 390 Adventure, which is a bit more relaxed in its stance and offers better comfort levels and weather protection.

Where the updated 390 Duke gained a TFT dash, this generation has a fairly basic LCD display. That said, it does have a fuel gauge so you can’t moan too much. A lot of owners report issues with condensation finding its way into the dash (both this one and the TFT), so look for signs of this happening as water can play havoc with the electrics and that means a new dash, which is about £150 used if you can locate one. Switchable ABS is standard on all 390 Dukes.

When it comes to accessories, a lot of bikes come with tail tidies, crash protection, wheel tape and even the handy pillion seat bag. Race exhausts are also common (always question why it has a new exhaust fitted, has it been in an accident?) and so are brush guards and small screens. In general, good options such as heated grips, crash bungs, a tail tidy and maybe a loud pipe (they can be horrifically loud, be careful) are acceptable but that’s about the limit – avoid heavily modified bikes as that usually means it has been down the road. And watch out for alarms, not many have them fitted but the Duke’s battery is quite small and older alarm systems and small batteries often end up becoming quite a nuisance unless you use the bike regularly or stick it on a charger to keep the battery topped up.

The 390 Duke makes for a really good new rider’s bike as it is light, agile and fun – not to mention well-priced. If you have an A2 licence, it is the perfect machine to gain some valuable experience on before progressing to a heavier bigger capacity model when you pass your full A licence. Those who already hold an unrestricted licence may also find the Duke’s manoeuvrability, reasonable economy and light weight appealing as a town bike for hacking through the traffic on. With used prices now plateauing, it is unlikely you will lose much cash should you own one for a year or two and then decide to sell it on – which is always great news! Reliability is a bit of a worry but that’s a gamble that is worth taking on the 390 Duke as most seem fairly sturdily built if well looked after.

Three things we love about the 390 Duke… 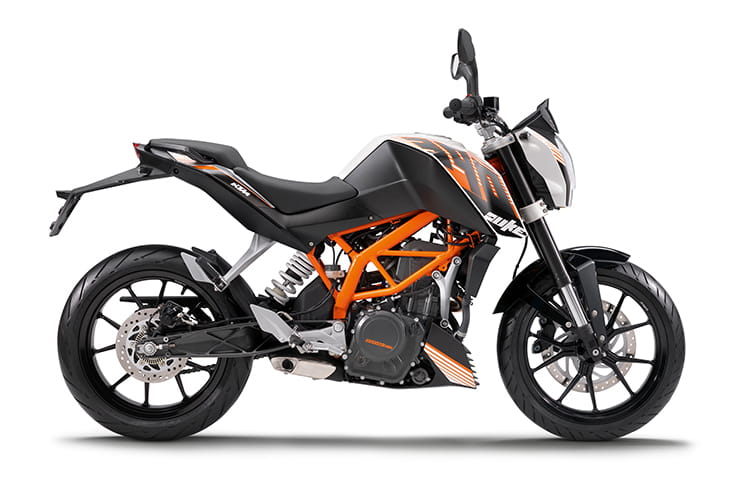 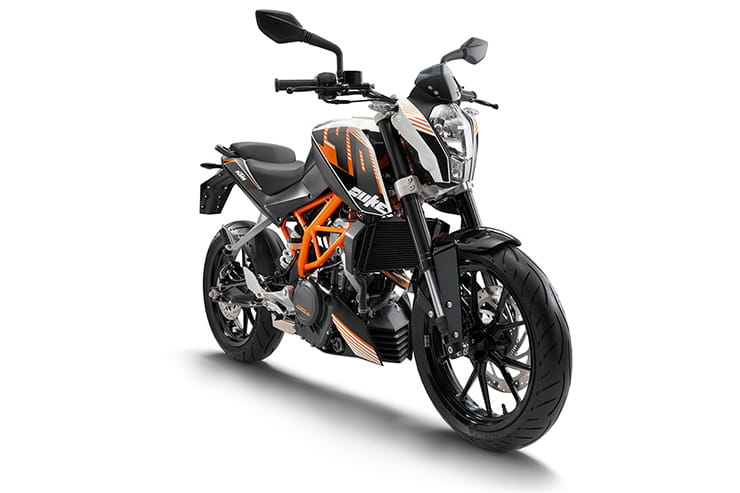 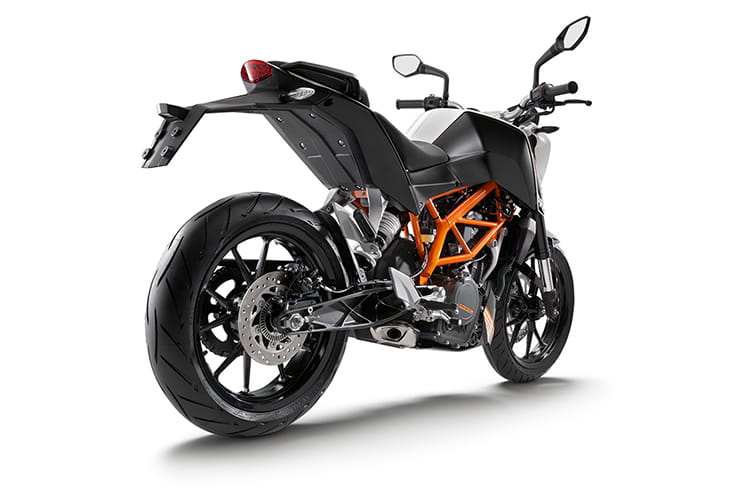