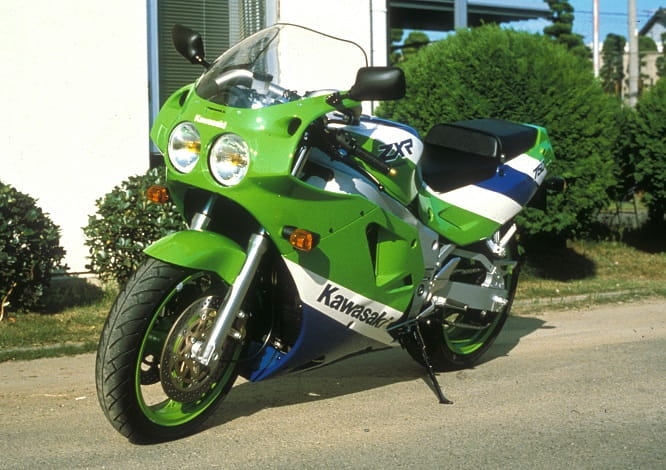 The ZXR750 holds a very special place in a large number of rider’s hearts. Thanks to its ‘hoover pipes’, lurid green paint and fact it was the underdog that succeeded where so many failed, gives this awesome Kawasaki a fearsome reputation. A true icon from the glory days of World Superbike racing, this was the bike that launched Scott Russell into the big time, kick started the war both on track and in the press between him and Foggy and made a small American tuning firm a household name. You just have to love a ZXR750 and it all started with the H1.

Unveiled in 1989, the H1 was actually tested and developed in full view of the world during the 1988 World Endurance series. A prototype racer called the ZXR-7 was raced by the factory Kawasaki team and was effectively a GPX750R with a hand-built frame and unique boxy fairing and seat unit. This machine soon started the rumour mill of the immanent arrival of a new Kawasaki sportsbike to replace the aging GPX and by late 1988 the public got their first glimpses of the ZXR750. The workingman’s superbike had arrived. 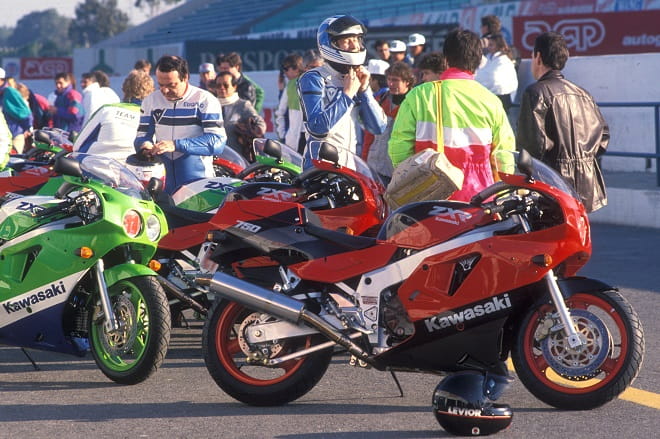 When Kawasaki pulled the covers off the ZXR it was love at first sight for riders all over the world. With its twin headlights, race inspired fairing and paint scheme and hoover pipes, the ZXR looked every bit an endurance racer for the road. Add in the beefy aluminium E-Box frame, 17-inch wheels and sporty rubber and the ZXR certainly gave the impression it meant business. Who cared if the hoover pipes did absolutely nothing aside from blow air onto the cylinder head, they looked cool and that was what really counted. Would the motor also deliver a race feel?

Surprisingly, the ZXR and GPX’s motors were actually pretty similar. Kawasaki took the GPX’s bottom end and refined it through improved cooling, a deeper sump and a new slipper clutch. However it was at the engine’s top end that the real changes happened. Considering the current thinking it seems odd, but to allow the ZXR to rev higher, and therefore produce more power in race trim, Kawasaki changed the ZXR to a bucket and shim style of valve train rather than keep the GPX’s rocker arms. Nowadays modern sportsbikes are reversing this action, but in 1989 it was the best route and, despite the ZXR only making 1bhp more than the GPX, it had stacks of tuning potential. All it needed was the right firm to get behind it…

With showroom sales already strong and the ZXR setting the benchmark for inline four road bikes, in 1993 the Muzzy Kawasaki team, with rider Scott Russell took to the world stage and cemented the ZXR’s place in history. The ZXR shouldn’t have been a match for the exotic Ducati 888, OW-01 or RC30, but thanks to Scott Russell’s determination (and a Michael Jackson concert) it took on the ultra expensive WSB homologation specials and won. Us Brits love an underdog and the workingman’s superbike had beaten the flash Italian and despite an American rider trumping a Brit, when it came to machinery everyone wanted the Kawasaki to succeed. 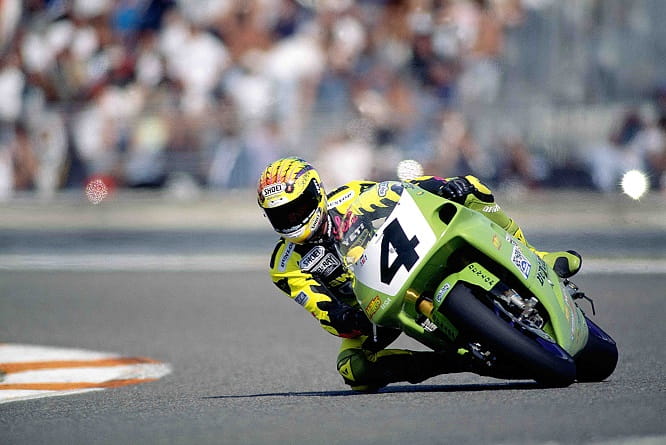 Nowadays nothing shouts 1990s better than a ZXR and the H1 is the first of its generation. True the shock is horrifically hard (it was marginally improved in the subsequent H2 model) but nostalgia brushes over this fact and the sound of that screaming inline four is a pure delight. The ZXR was made in huge numbers and thanks to Kawasaki’s solid engineering a lot still survive, although they are often pretty tatty as, unlike an equivalent vintage Ducati, the ZXR was a bike to be ridden and enjoyed whatever the weather. A tidy example of an H1 should cost less than £3000, however if you can push the boat out the first homologation special ZXR750R’s were built in 1991 and 1992 and can be found for less than £7000. Its flat slide carbs make it a less pleasant road bike, but its status as a limited edition model means it is more likely to increase in value.

http://www.zxforums.com - The name gives it away but this forum is dedicated to all ZX models and the ZXR750 area is fairly active.

http://www.muzzys.com - go directly to the man himself! Rob Muzzy is still making go faster parts from his shop in America.