A year on from Indian’s rebirth with three Chief models comes the first of a smaller and sportier range from the American marque: the Indian Scout. Back in the 1920s the original Indian Scout was the sports model of Indian’s line-up. It was successful in dirt-track racing and was still going strong in the 1960s with Burt Munro’s “World’s Fastest Indian” streamliner. 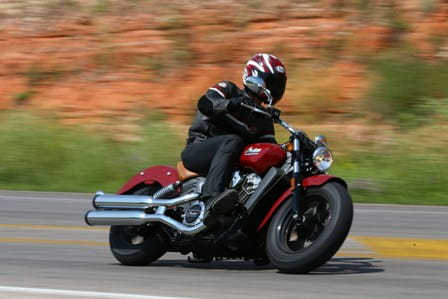 This new Scout is no performance bike, but it’s distinctly more compact and sporty than the Chief — almost midway between a cruiser and a naked roadster. Its new engine is not an aircooled, pushrod V-twin like the Chief’s but an 1133cc, dohc eight-valve, liquid-cooled unit that produces its maximum of 100bhp at a relatively high 8000rpm.

The Scout’s a pretty long bike but most of all it’s low, with a single saddle that sits just 673mm off the ground. Indian’s design team did their best to give it some old-timer styling cues, notably the way that the cast ally frame and diagonally mounted twin shocks combine with the forks and fuel tank to give a look reminiscent of the rigid-framed original model. 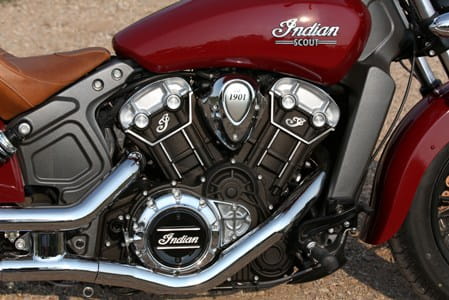 There’s a quality feel to the Scout, with nicely machined engine covers, and Indian’s curly script on paintwork that comes in four colours (traditional deep red, silver and gloss or matt black). Neat details include that saddle, fashioned from brown leather, and a chromed air filter cover stamped 1901, the year of the marque’s birth. Even the key that fits into the ignition on the left side of the engine is shaped like a warrior’s head-dress.

Indian gave the Scout a spectacular debut with an evening display at the huge rally in Sturgis, South Dakota, where veteran Wall of Death rider Charlie Ransom swapped his normal vintage Scout for a brand new model before tearing round the vertical wooden structure, grabbing dollar bills from the hands of spectators leaning over the top. 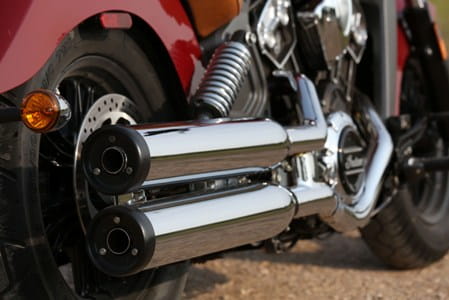 My test ride in the surrounding Black Hills a couple of days later was slightly less exciting but the Indian Scout showed it has plenty of go. At 246kg dry it’s no lightweight but that 100-horse max is enough to get it accelerating respectably hard if you use the revs, heading for a top speed of over 120mph and feeling plenty fast enough given the exposed riding position dictated by the wide, slightly raised one-piece handlebar.

Above about 5000rpm there’s a bit of vibration through the seat and forward-set pegs, and most of the time I made use of the ample low-rev torque, short-shifting through the sweet-shifting six-speed gearbox. The long-legged Indian cruised effortlessly at 4000rpm in top with 80mph showing on its simple, round analogue speedo, which has a small digital rev-counter set into its face. 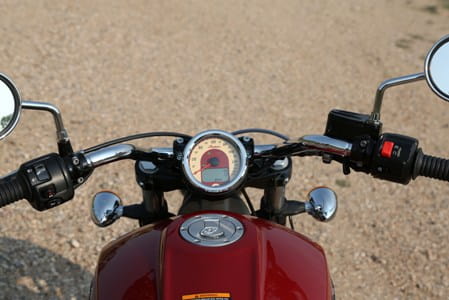 Fuelling was very good, and the ride-by-wire throttle response gentle, not least because the Scout is intended as an entry-level model in its home market, where Indian also hopes to attract female riders. The low seat will help there, and made the Scout feel notably light and manoeuvrable at a standstill, helped by its low centre of gravity.

Handling was good too, with fairly light steering even though the conventional 40mm forks are kicked out at 29 degrees. The Scout was fun to crank round the twisty roads of the Black Hills. When ridden hard, especially over bumps, its suspension stared to feel slightly imprecise but control was generally good, and ride quality too given that the shocks give only 76mm of rear wheel travel.

Braking was stronger than I’d expected from the simple spec of single disc at each end, with a twin-piston caliper up front. In bends it wasn’t hard to get the footrest tips scraping, but clearance for solid parts was fine. My only mild gripe with the footrests was that a couple of times the wide tip caught my boot as I went to put a foot down in traffic, almost causing a spill. 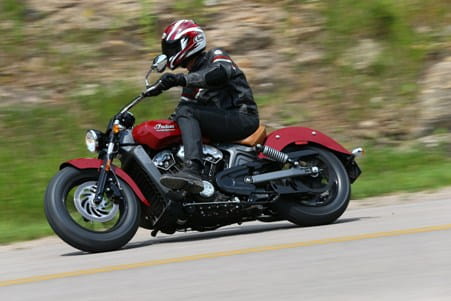 In other respects the Scout was immaculately behaved, and should prove fairly practical by cruiser standards. The saddle seemed reasonably comfortable (being tall, I’d probably have been better off with the roomier accessory); the 12.5-litre tank should give a range of over 120 miles. Other accessories include QD wind-screen, leather panniers and alternative pipes.

At £10,399 when it arrives early next year the Indian Scout will cost a bit more than Harley-Davidson’s Sportster 1200 models but it’s a considerably more powerful and sophisticated machine, and one that has just as much distinctive and unmistakably American V-twin style. If old rival Harley didn’t realise they had a genuine fight on their hands a year ago, when the first bunch of Indians turned up, they surely do now. 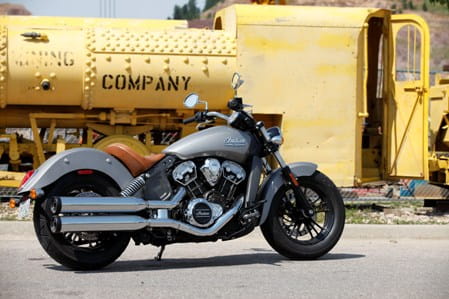