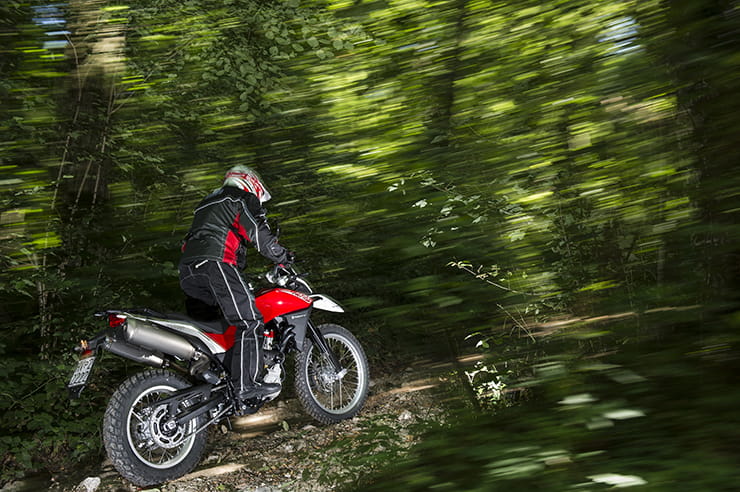 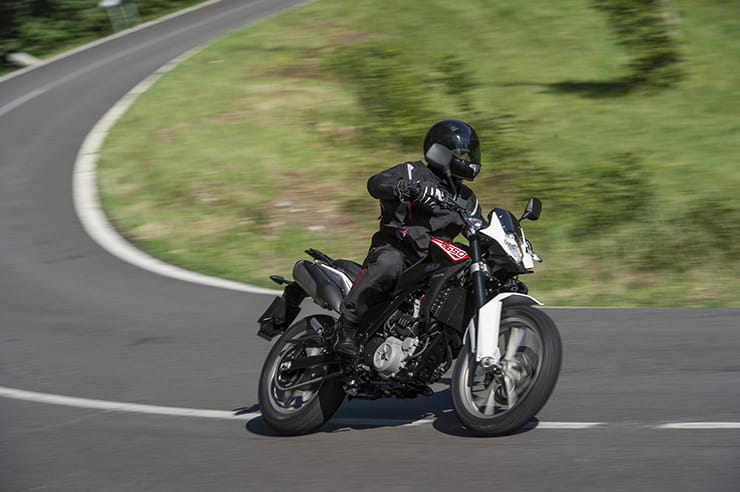 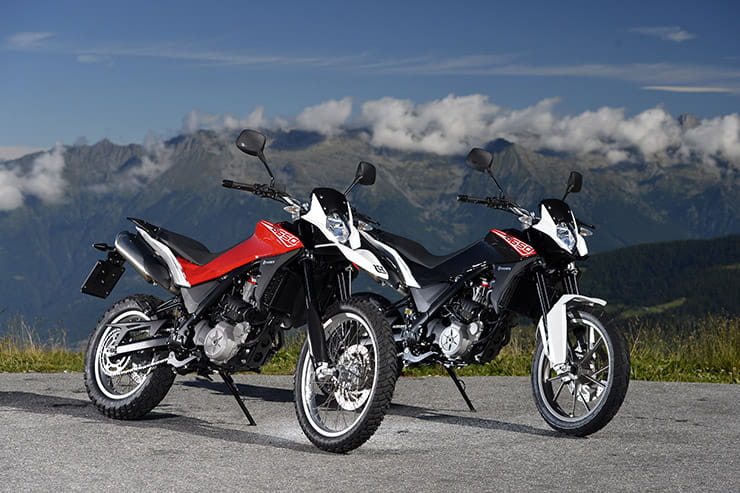 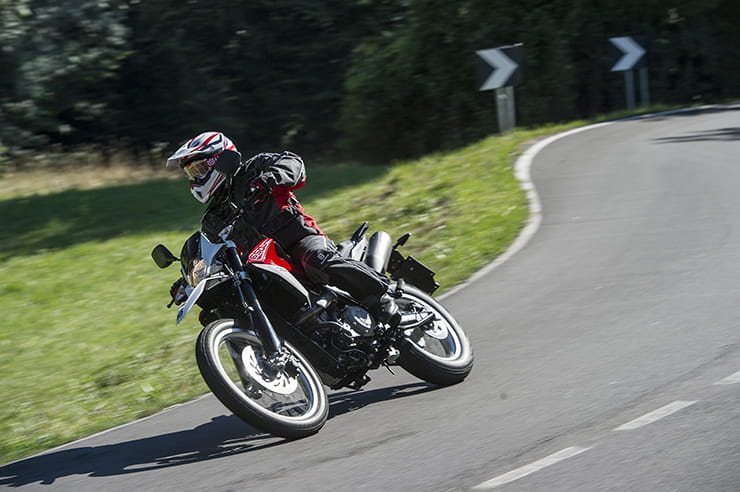 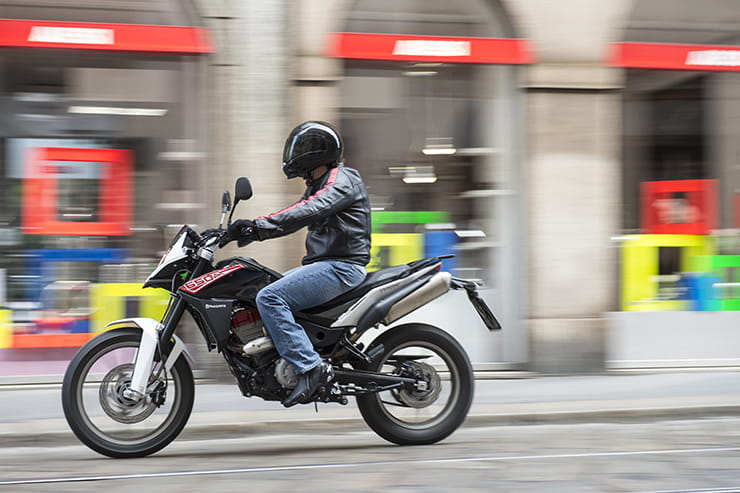 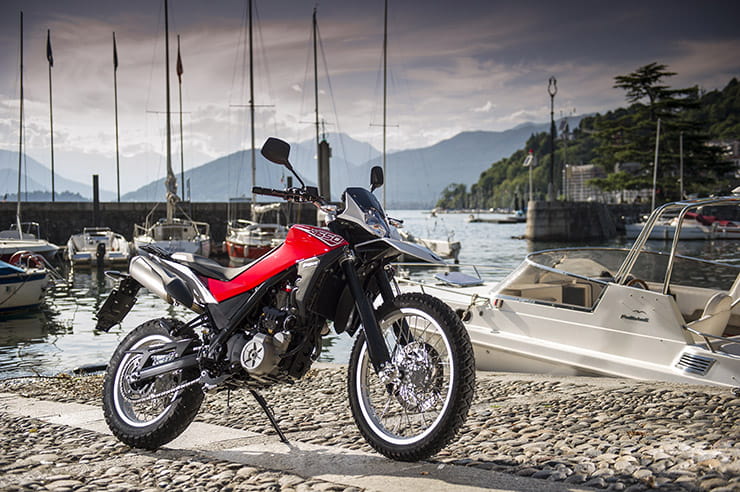 Who has ever heard of the Husqvarna TR650 Terra and Strada models? Be honest now... Well, there is no shame in that as these odd machines appeared for one short year and then vanished from the scene as BMW got shot of Husky in 2013. So, what are they? Launched in 2012, both the Strada and Terra were a result of BMW’s ill-fated acquisition of Husqvarna. BMW wanted to exploit the off-road manufacturer’s name and so effectively tweaked and re-badged one of their existing bikes, the G650GS, to make two ‘new’ Husky models with the Strada more road-focused and the Terra off-road inspired. Never big sellers in the UK due to issues with the Husky dealership network, there are a few TR650 models over here and they make for interesting, and rugged, middleweight adventure bikes that are generally cheap to buy as no one has ever heard of them – until now!

Back in 2012 the TR650 models cost a reasonable £5690 (there was also a non-ABS Terra for £4990) which was cheaper than the £6195 BMW G650GS they were based upon as well as the £6499 Yamaha XT660R and X and also the single-cylinder Tenere. However, they didn’t sell well at all and as a result most were fired out of dealership doors at bargain basement prices of around £5000. Although rare in the used market in the UK, you can expect to pay in the region of £3000 to £3800 for a TR model in good condition while a ratty one will be just under £2800. The problem that sellers have (as demonstrated perfectly by the one that is currently for sale in the UK on an online auction site) is that as no one knows what a TR650 is (and therefore searches for one) they are worried about spares, meaning offers are limited. If you are happy to take a punt, make a cheeky bid and you may well get lucky.

Powered by a tweaked version of the G650 engine (see below) the TR650 models perform exactly as you would expect from a water-cooled single cylinder. Lumpy and a bit vibey when you rev them, they deliver a reasonably flat amount of torque and are best described as functional rather than fun. They aren’t plodders but by the same token, they aren’t a patch on a modern single such as the KTM 690 when it comes to performance. If you are happy to work the gearbox, they are quite amusing up to a point but if you just want to ride through traffic, they are equally as happy taking it easy.

Based on BMW’s G650 engine, which is liquid-cooled and has a DOHC with four valves, the TR650 motor has been tweaked for a bit more spice. Husky (ok, BMW...) modified the fuel-injection system, altered the cams, fitted a forged piston, increased the size of the valves and upped the compression with an end result of 58bhp and 60Nm of torque, which is up 10bhp on the G650 but with the same peak torque. Pleasingly, this increase has been done without compromising reliability and they very seldom go wrong. Always be wary of a motor that smokes from cold as this hints as major internal issues but in reality it is still quite underpowered and therefore not stressed. The exhaust system is made from stainless steel, which is great news however a few owners report that cracks around the welds can appear, and the five-speed gearbox is also very robust. As with so many bikes of this kind the finish on the engine is a bit of a worry and it isn’t unusual to see flaking paint while on the Terra be wary of damage on the underside through off-road use. Most owners take them off-road (it’s a Husky, that’s what they do...) and so there will probably be a sump guard fitted so look under this for marks or rust as they can allow water to pool. Pleasingly, as the TR engine is basically the same as the GS’s, consumable parts such as oil and air filters etc are easily available and cheap. The bad news is that plastics and parts bespoke to the bike are rarer. 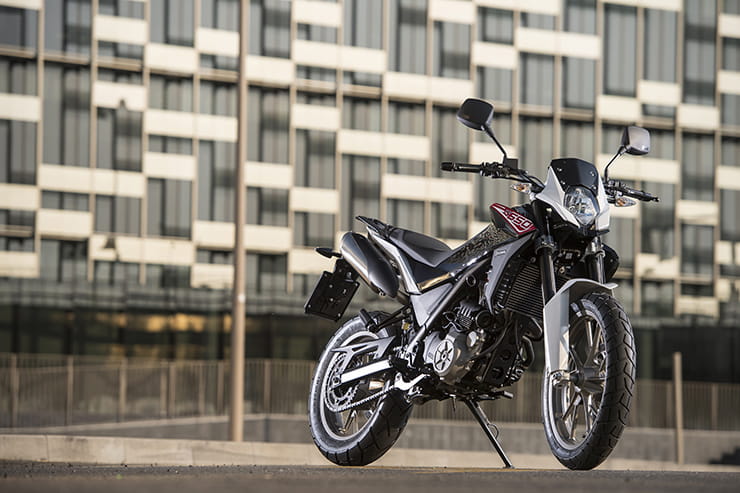 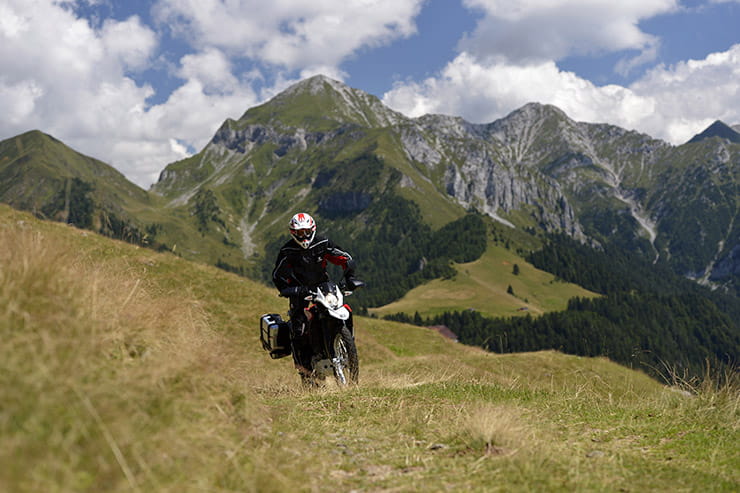 Husky claimed that the TR models could return between 65mpg and 88mpg, which isn’t bad at all and owners report this is actually quite accurate with mid-60s mpg figures common. If you want frugal motoring, this is the bike for you as insurance is also cheap and consumable parts (that are common with the GS) easily available.

The Terra and Strada are basically identical bar their wheel sizes with the on-road Strada using a cast 19-inch front and 17-inch rear and the off-road Terra a spoke 21-inch front with a 17-inch rear. Although, oddly, the non-ABS bike runs a 18-inch rear. The geometry is also very slightly different between the two models, but nothing to write home about and the suspension (bar damping rates), brakes, etc are identical. On the go the Strada is, naturally, the better road bike and it delivers a decent ride quality and is nice and light for town work. It’s hard to get too excited about it but, much like the motor, it is undeniably functional and has a bit of spirit about it. The Terra’s larger front wheel means it isn’t as assured as the Strada on the road, but it is a proper off-road bike that is ideally suited to life on the UK’s green lanes and makes for a brilliant starter bike for anyone new to adventure riding. In terms of spares, OE plastics are tricky to locate but aftermarket replacements are common and the same goes for parts such as bars, brush guards etc. The bike was more popular in America, so a lot of OE spares come from over the pond, which means postage will set you back a fair bit for a tricky to locate part.

The Strada had disengagable ABS as standard, which is a very basic system but ok for road use, where the Terra was sold with ABS as an option. The non-ABS bike runs an 18-inch rear wheel where the ABS one has a 17-inch item. The two-piston sliding Brembo caliper is about as basic as it gets and is very easy to rebuild if required (it probably will be) and parts are commonplace. 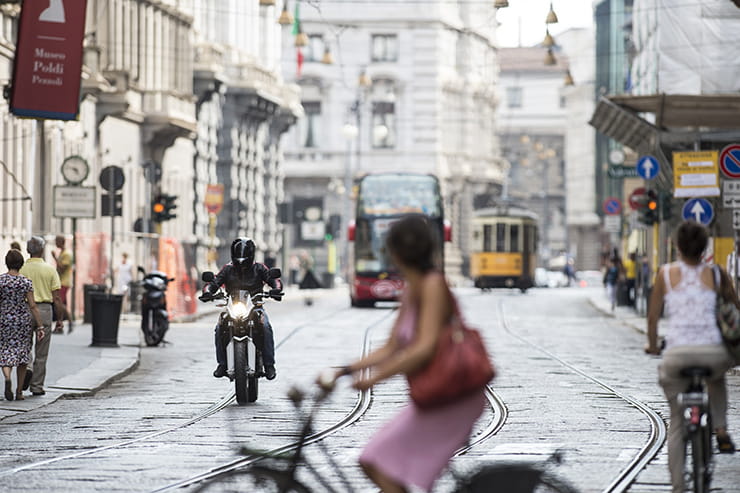 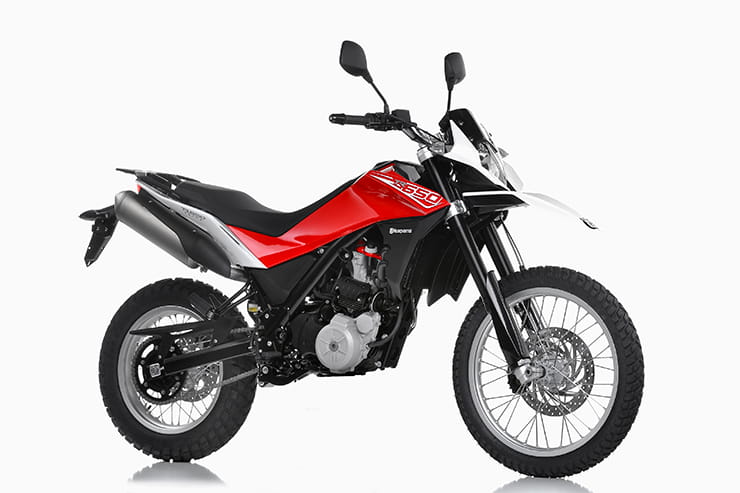 You can tour on a TR but due to the small capacity motor and general off-road focus they aren’t great for it, so the best idea is to stick to weekend adventures instead. A lot of riders fit taller screens and creature comforts such as heated grips, brush guards etc but really, although there are panniers available, these are mainly saved for urban riding. Pleasingly, the clutch and brake lever’s span can be adjusted.

Aside from ABS, which can be turned off on both models, the Husky bikes are pretty basic and lack any assists. Husky sold a variety of options including a 48bhp power restrictor, bigger screen, heated grips, off-road crash protection and panniers. A lot of aftermarket firms cater for the bikes and replacement exhaust cans, bigger bash plate, alloy guards, bar guards and the like are very common on the Terra where Stradas stay more stock. Probably as they tend to get flung at blackberry bushes less...

If you are considering green lane riding in the UK and want a solid bike, the Terra is a good option while the Strada makes for a non-assuming commuter. They have a bit more sex appeal than the G650GS they are based upon as well as more power, so are worth considering if you are in the market for a middleweight trail bike. If you can find one...

Three things we love about the Terra and Strada… 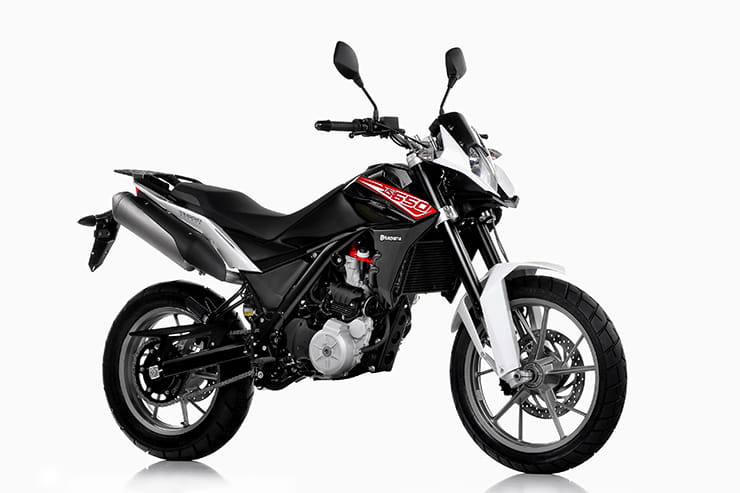 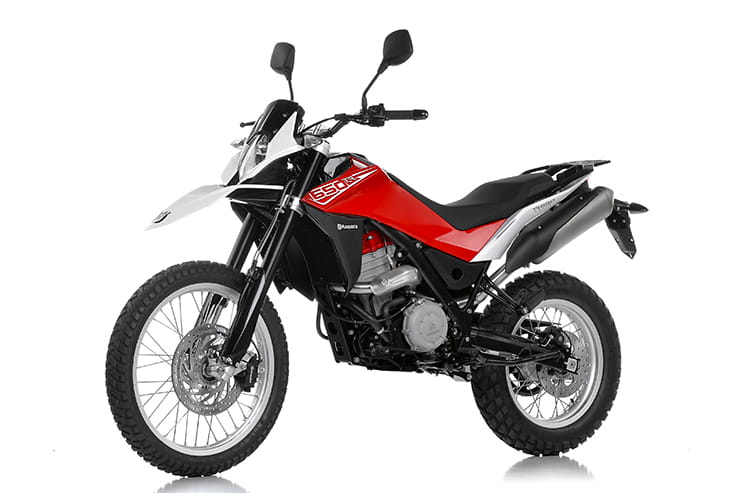