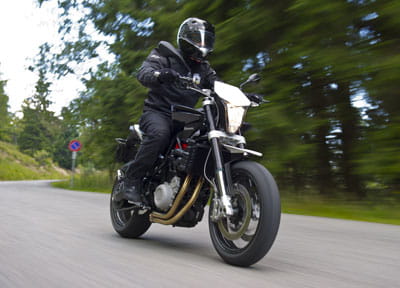 Husqvarana’s return to pure road-going bikes with the new Nuda 900 couldn’t have been any better if it had been gold-plated and put lights on one of its famed off-road bikes. As it is, the Nuda 900 is actually a much better proposition simply because it was made to be ridden by anybody regardless of experience and have a good time while doing so.

Powered by BMW’s parallel twin F800 motor, the Husky side of the BMW Motorrad group pulled the engine apart, ramped up the engine capacity to 898cc, wedged in some uprated engine internals and rebuilt it with additional performance to make the F800 look docile.

It’s a storming engine that can be docile and tractable one second and a thumping little powerhouse the next. It also comes with an exhaust soundtrack that surely borders on naughty in a similar way to Ducati’s of old. Even though it ‘only’ makes 105bhp, that figure is relative to the style of the bike.

It isn’t quite supermoto in the traditional motorcrosser meets road wheel and lights sort of way, nor is it an adventure-styled bike. Perhaps the best way to describe the Nuda is a modern form of naked muscle bike, without the bulk of inflated muscle.

Instead, Nuda is a flyweight boxer and very capable of attacking twisting B-roads and boring motorways alike. But it makes perfect sense when used on country roads where its light weight and agility can help it keep pace with race replicas, or even better them with the right person onboard.

There’s a distinct care-free attitude that comes with the Nuda. Whether this is because the bike is different enough and manageable to be flung about or maybe because that’s the attitude gained by sitting upright on a wide-barred killer of corners. Make no mistake, its easy-going and tall (870mm) seating position belies the fact the chassis can be pushed hard without it objecting.

Is the Nuda 900 practical? Despite the small 13-litre fuel tank (in BMW guise the engine is capable of 70mpg) it is as practical as any other naked bike. But rather than being, say, staid like a Triumph Bonneville, or built for pure performance, the Nuda manages to cross into usability on any road, for whatever reason. There aren’t many bikes that can do this.

+ points – excellent performer that needs a test ride to believe how good it is.