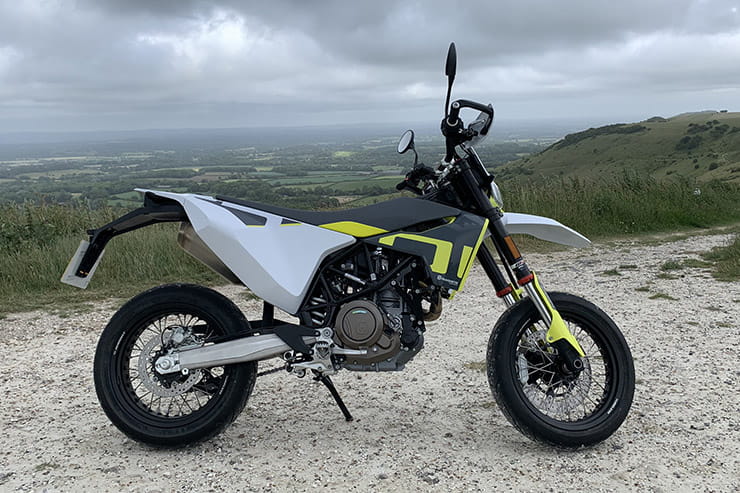 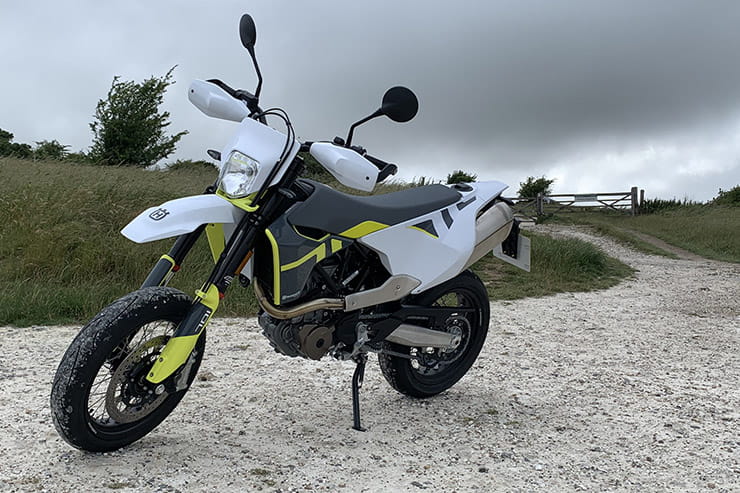 It's easy to fall for the Supermoto fantasy. Lightweight, punchy, highly focused sports bikes with upright riding positions and suspension built for British back roads. The BSP (big selling point) is that they work at the kind of speeds that most of actually ride at on the road.

Sadly, out of the 20 or so serious contenders in the last 30 years only a handful came close to delivering.

Mostly, I'd blame the parents. Starting off with a fire-breathing motocross or enduro bike seems obvious because that's what the original Supermoto racers were. But dirt bikes don't do more than 70mph, or have to be silenced. They have a completely different cornering style that requires suspension and braking set-ups unsuited to road bikes. They rarely do 60 miles between fill-ups and rest breaks and service intervals are measured in hours.

Simply fitting road wheels, lights and a silencer (as companies like Husaberg and Husqvarna did in the early noughties) doesn't work because being overtaken by a Nissan Almera on the dual carriageway bursts too many bubbles. Plus long travel suspension and off-road brakes mean you need to start braking for the next corner almost as soon as you accelerate out of the last one..

But this one does work. Husqvarna have built a bike based on an enduro machine, but taken the time to make it road legal and road-friendly too without losing the madness. That's not easy…or cheap and the 701SM's price reflects it. This bike has an engine that fuels the aggressive, punchy Supermoto fantasy, but also cruises at 80mph with plenty more to come. It has suspension that soaks up the bumps, but also stays controlled while braking into corners. And it has traction control and cornering ABS for when you go way fast into a corner or get a little giddy on the way out.

The Husqvarna 701SM is not cheap, but if the roads you ride suit what it does, you won't find a better bike – I guarantee it. 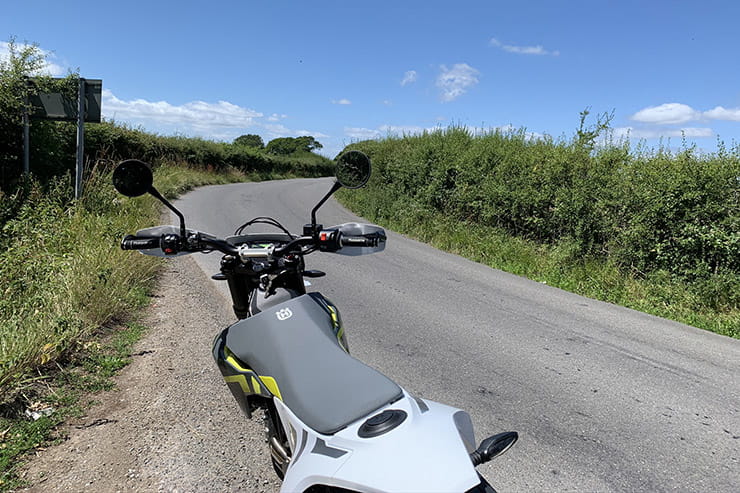 At just 147kg without fuel you don't get much metal for your money. Thankfully, that's a good thing

List price is £9799. That's a lot for a 74bhp single-minded, single-cylinder motorcycle.  But if you live in one of the many parts of the UK that aren't north of Sheffield or west of Swindon, there's a good chance you'll get a lot more pleasure from one of these than any proper sports bike on sale in 2020.

Look beyond the power figures, number of disc brakes and lack-of anti-wheelie devices and you'll see a bike every bit as focused and single-minded as any RR or SP version of your favourite world superbike replica.

The only serious competition comes from Husqvarna's Austrian sibling KTM in their SMC690R, which, under the paint is a very similar motorcycle for the same kind of price. 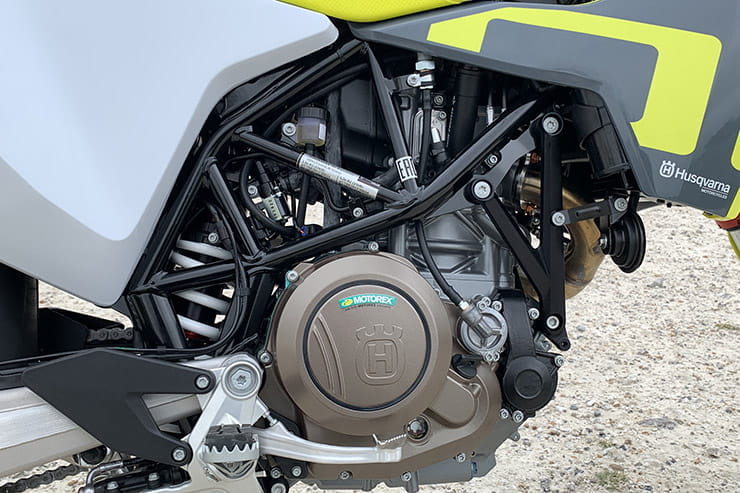 The best roadgoing single-cylinder engine ever…by miles. Easy to use, punchy and frugal too

74bhp isn't going to impress the Top Trumps brigade in motorcycling and these days you'll struggle to find anyone else bothering to make a high-performance single-cylinder motor. Modern fuel-injection and ignition systems have allowed Husqvarna to solve the poor starting, unusable low-speed running and lack of peak power that ruined just about every big single since power topped 30bhp in the 1950s. This motor uses it's 51lb-ft of torque to punch hard from low revs, makes strong midrange power and holds onto its revs in each gear for long enough to peak at 74bhp, which makes it usable on fast A-roads as well as the twistiest of back roads. Every ride is an assault on your body and mind and the countryside. Aggressively going up through the gears, braking harder than you ever did before on the road, while stamping down the box, leaning less than you imagined, but cornering faster and then repeat till body and brain have had enough. 15 miles on a 701SM is as involving and tiring as 60 miles on most bikes. You'll either love it or be very confused.

What's different about this engine though is that it will also do motorway speeds. 80mph is easy and relatively relaxed, 90mph is acceptable and the 701 will go surprisingly faster still. We didn't speed test it, but someone I know who has saw 120mph flat out. That's easily quicker than any other single-cylinder road bike and only 20mph slower than a typical BSA Gold Star owner claims their bike will do (which in turn is only about twice the actual top speed of an actual Gold Star) 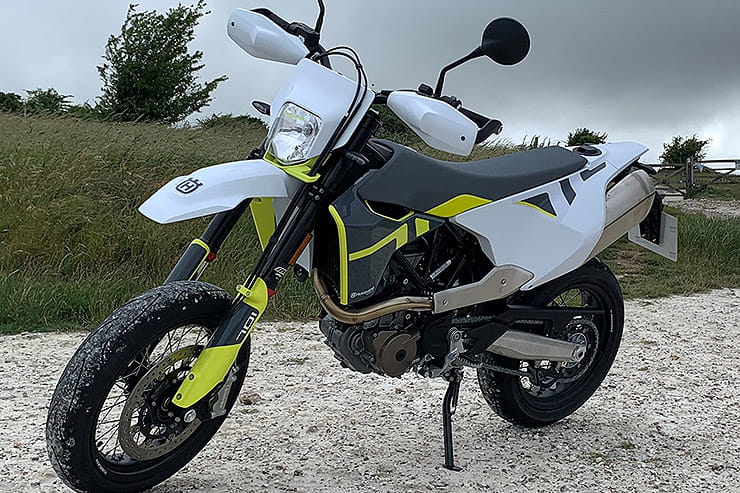 Single-cylinder silencers are usually enormous. We have no idea how Husqvarna pass Euro4 and still keep it small

Water-cooled, fuel-injected single cylinder, with a six-speed gearbox. The same basic engine is also used in the KTM SMC690 and Duke 690 too. How on earth KTM managed to get this much power from one hefty piston going up and down at 9000rpm and make it Euro 4 compliant without needing an exhaust can twice the size I have no idea. For a bike so barking mad, the 701SM is impressively quiet (I like my crazy commuters to be discreet).

What's even more impressive for such a highly tuned engine is that service intervals are 6000 miles apart and there's a two-year, 24,000-mile warranty.

Engine electronics are simple, but welcome. There are two rider modes; loopy and bonkers (Husky call them 1 and 2 with a laconic, Swedish sense of humour), lean sensitive traction control and ABS plus a quickshifter. The gearchange is good enough at mid-high revs not to really need it and at low rpm all big singles need a bit of practice to get slick-shifting right. It'll need smarter technology than a simple quickshifter to overcome that. 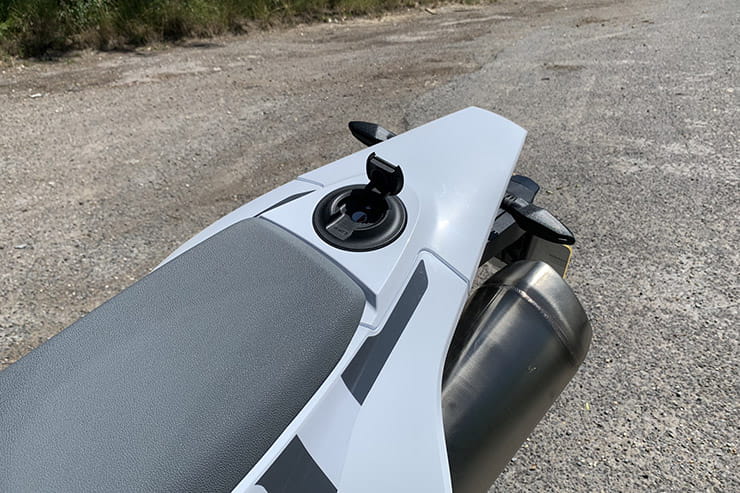 In 25 years of road testing I've done around half a dozen tests on big KTM-engined singles. Each one has made more power, gone a little bit quicker and somehow been more economical. This one averaged 56mpg which is ten more than the 640 Duke I tested in 1995 while going considerably quicker, being easier to ride and easier to start too.

Big singles have really benefited from the latest fuelling and ignition systems because trying to make them powerful, quiet and run properly on carbs was such a nightmare.

The fuel tank runs under the seat and holds 13 litres, giving a theoretical range of about 170 miles. I'm assuming there's a low fuel warning light, but, given the minimal instrumentation I wouldn't bet on it so found myself filling up long before that. 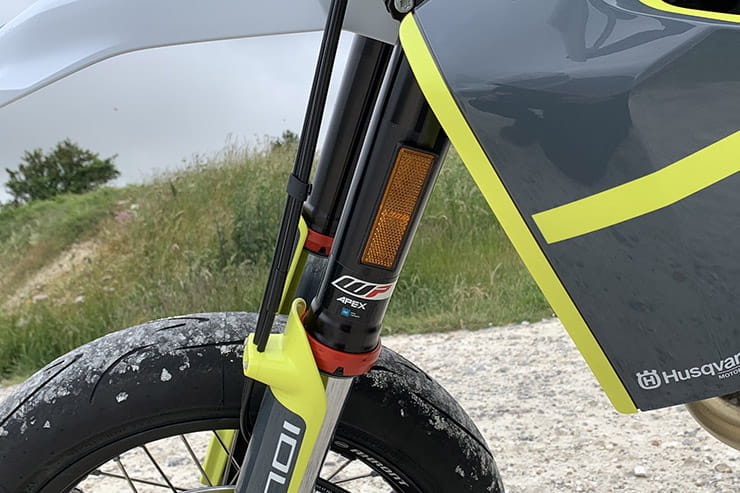 48mm upside-down forks can take all the braking you can throw at them.

The chassis looks identical to KTM's SMC690R but less orange and the WP suspension has been carefully set-up so it soaks up the bumps but also dives progressively as you grab the brakes going too fast into a corner (again) and rebounds with equal grace as you release the lever and get ready to turn-in.

The feet-out Supermoto fantasy only really works on the slowest of corners and even, then, it's much more for show – better to just attack the turn and go round faster with less style.

The riding position makes you much more aware of what the front end's doing than on a typical sports bike, which feels a bit odd if you haven't experienced it for a while.

This, for me is one of the joys of a good Supermoto though, especially in traffic where it feels like you can place the front wheel in whatever gap you like, no matter how small. Nothing steers round urban obstacles at low speeds like a well-set-up Supermoto. And this one, helped by weighing in at a stupidly skinny 149kg is easily the lightest bike on sale making this kind of power. 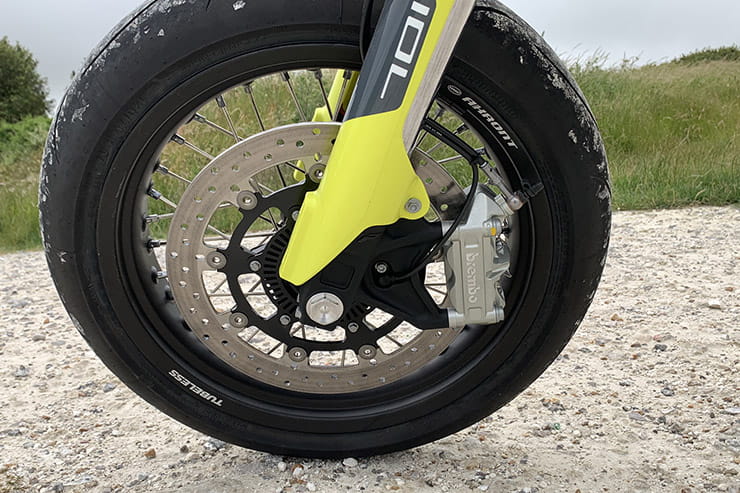 Dinner-plate disc, top-spec Brembo caliper and lean-sensitive ABS when your ambition outweighs your talent. Braking harder than ever before is the best part of bikes like this

I'm not a crazy braker. In 36 years my riding style has evolved to look ahead, anticipate, use the gears and ride smoothly and mostly within my limits.

Not on this bike. Husqvarna's 701SM has a huge Brembo caliper on the front that only has 149kg plus rider to stop. Combine this power with some beautifully set-up suspension and even the likes of me soon find themselves running fast into tight corners, yanking late and hard on the lever, still somehow braking to early and never coming close to bothering the lean-sensitive ABS.

The back brake is mostly redundant for stopping because the weight transfer means the rear wheel is barely making contact. But the rear brake is really useful for steadying the bike as you ignore said 36 years of skill-honing on the way out of a corner and just open the throttle as wide as you can. The back brake keeps the bike stable and stops the front wheel lifting (well, that was my excuse for being the only rider ever to not wheelie one). 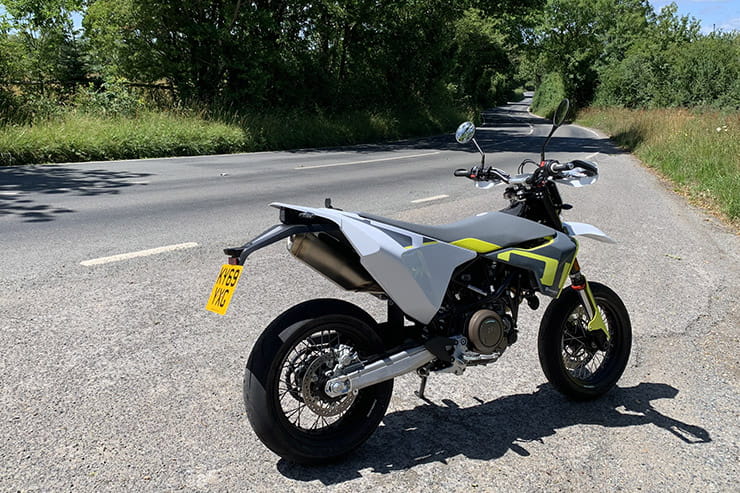 More comfortable than it looks but the riding position makes windblast the limiter on long, fast rides

The spec sheet says the seat height is 890mm. That's 15mm taller than Yamaha's Ténéré 700. But in reality the 701SM is much easier to sling a leg over and surprisingly comfortable to ride. I can't comment on long-distance comfort – the most I did was 90 minutes in the saddle. The 701SM has the performance to do motorways and dual carriageways and the seat stayed comfortable for the whole of that 90-minute ride. But this is not a bike for that. It's a toy for blatting round the back roads; high jinks, big thrills, low average speeds. You'll know if your local roads are right for a bike like this. If you buy one to replace your Kawasaki Z1000SX you're going to be disappointed. 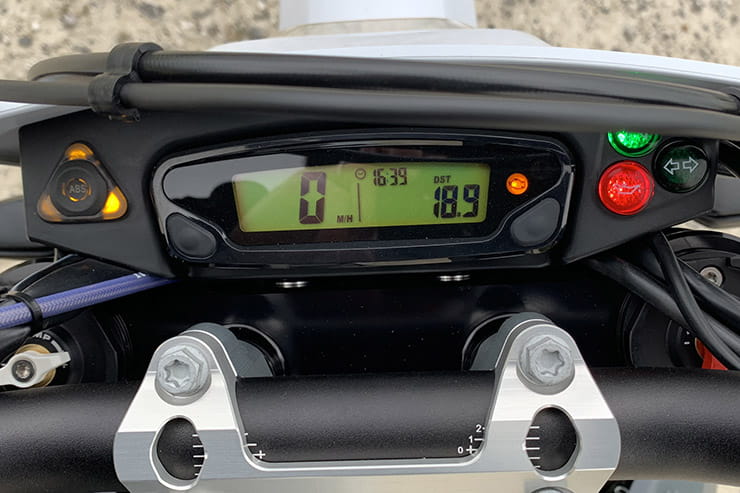 The LCD dash has a small speed readout, a clock and a milometer/trip. There's a handful of warning lights and that's it. No rev counter, no fuel gauge or Apple car play – nothing.

The two rider modes are controlled by a utilitarian-looking switch on the left switchgear – if you need any more to fiddle with than that, there's a multitude of suspension settings front and rear that you can twiddle and twirl. 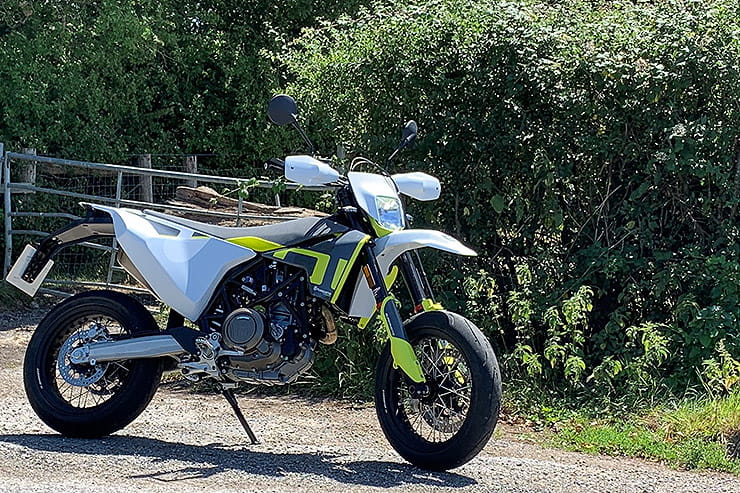 On paper it's hard to justify this much money for so little metal and plastic. And depending on where you live and the kind of riding you do the power, torque and performance figures don't make it any easier.

But…and this is a very big but, if you are a sporty, Sunday rider, who typically does around 80-100 miles at a time and you are honest enough to admit that, away from motorways you rarely top 85mph because the roads you ride are:

Then I would honestly say, hand on heart that I would much rather spend £9799 on one of these than a traditional sports bike. You might think that's easy for me to say – I didn't buy this one. And you might be right. It's easy for road testers to get frothy about ridiculous, impractical novelties that we'd never actually buy. But the flip side of that is that we are also lucky enough to put miles onto all kinds of bikes without the emotional attachment of having bought one. We can be independent too. And, given the place I live and the roads around here to ride I would absolutely buy one of these before a sports bike.

I'd be nervous about reliability and even more wary of depreciation and ease of selling when I needed to calm down. And it couldn't be my only bike or become a way of life.

But as a daft distraction for one or two summers while I made the transition to being a proper grown-up rider, or commuting through busy towns and getting the last parking spot first, I haven't ridden a better bike. 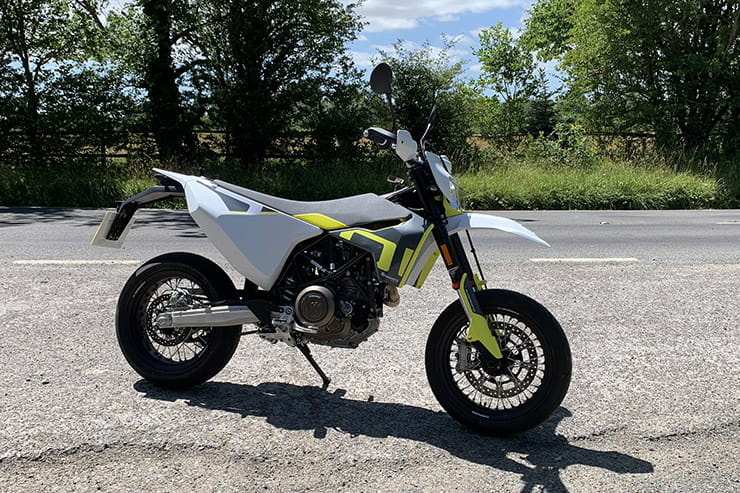