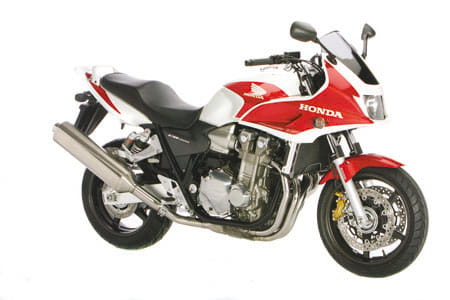 At the moment there is a big increase in popularity for naked retro bikes and few are bigger, or more retro, than Honda’s superb CB1300. Evoking memories of the legendary CB1100, the CB1300 was first launched as a naked bike in 2003 before being joined in 2005 by a new half-faired ‘S’ version which also featured ABS and glove boxes. Glove boxes on a retro, what is the world coming to? But that wasn’t all that wasn’t quite retro about the CB…

Where the likes of Yamaha with the XJR and Suzuki with the GSX1400 stuck rigidly to the ‘old means air-cooled’ motor philosophy, Honda abandoned these principles and gave the CB a thumping 1284cc inline four water-cooled lump. If you ignore the cries of protest from air-cooled fans and instead just ride the CB you will see the wisdom in Honda’s ways. 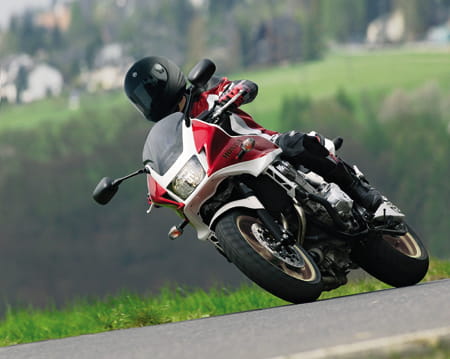 The CB’s engine is absolutely amazing to ride, so packed full of torque that it virtually makes the gearbox redundant and smoother than liquid chocolate. One or two up the CB simply shrugs off the extra weight and powers away as if it is driven by a massive turbine. Which is a good thing as the CB itself is no lightweight…

Tipping the scales at 236kg the Honda is designed to feel big and macho to ride. Retro machines need a certain presence about them and the CB certainly delivers this impression. The bars are nice and wide, the seat gigantic and well padded and the pegs low and comfortable. However there are some downsides to this bulk. 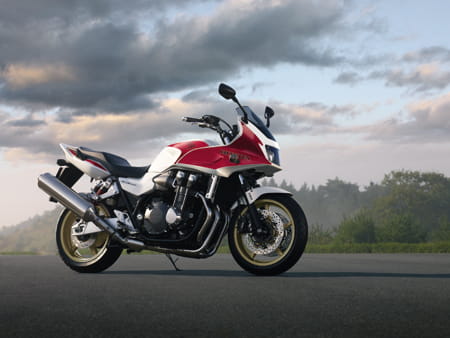 At low speed the CB can be a little cumbersome and ungainly and although the relatively low 790mm seat height helps you get your feet down quickly should you get caught out, holding up such a heavy bike can be tricky. That said, once moving the CB’s weight makes it feel very solid through corners and reassuring at speed.

Oddly enough, despite being the best of the modern retro bikes to ride the CB has never been a huge seller for Honda. Riders seem to prefer the GSX1400’s size and attitude, the Yamaha XJR1300’s heritage or the Kawasaki ZRX’s styling, leaving the Honda stuck somewhere in the middle ground. While it is still in the official Honda line-up (in half-faired style only, the naked bike has been discontinued) the CB is a bike that is best sampled second hand. Around £3,000 can find you a good condition used model, and at this price you can test if going naked is something you like the feel of without committing too much cash. Give the CB1300 a go, you may well fall for the charms of this excellent retro.