Away from the semi-glamorous settings of new model press launches set in foreign climates or the will to ride as quickly as possible when on a UK press test, we've created the ‘Fuel Tank Test’ which is as simple as it sounds.

Select a model available from a manufacturers current line-up and take it on an interesting journey or series of rides to see how good its economy is by riding at regular, everyday speeds. 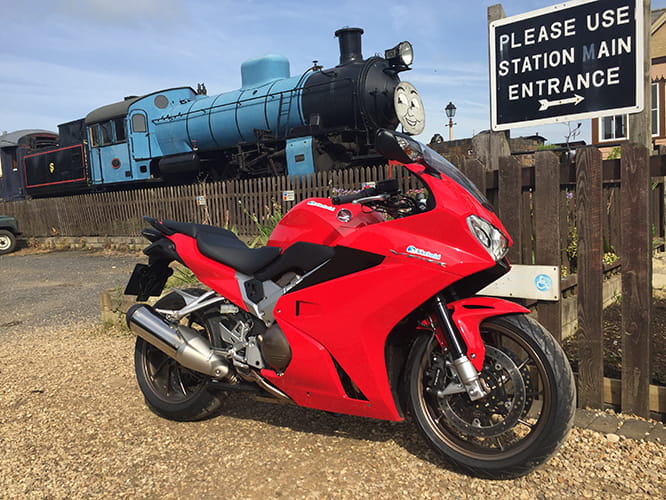 A retro test, how cute an idea is that, they were my initial thoughts when I discovered I was getting a Honda VFR800 to test. My head went back to those early VFR800s that were VTEC free zones. Before I could enquire if the 800 was one of those silver and red anniversary models my bubble had burst, it wasn’t a retro test but instead a 2016 model.

So, who’d buy a VFR800 these days? The Adventure bikes tick the touring side of things and there’s a shed load of hard core sports bikes if that’s the itch you want to scratch. Sports tourers had it all their own way for decades and while I quietly fear that the sports tourer is diminishing, Ducati recently sort-of revealing their new Super Sports bike could prove me wrong. Maybe Honda were ahead of the curve.

The new 800 arrived in 2014 and not much of the outgoing model lived on. There was the usual weight saving measures, although no VFR has ever been an outright bloater. Losing the under seat exhaust saved half of the 10 kilos that the new model shaved off the previous model. The frame is exactly the same, but what makes this model appear sleeker is the radiator reverting to a position in front of the front two cylinders, instead of being side mounted. 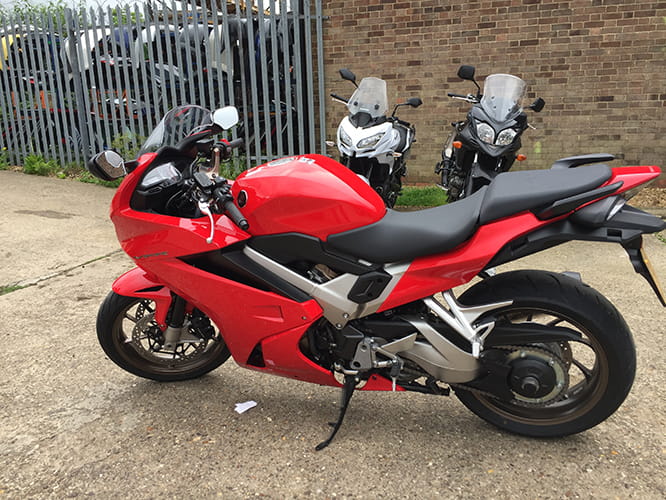 The result is a bike that takes full advantage of the lack of width that a V4 engine rewards you with. The fairing panels are stylish, and the pointy headlamp gives the VFR a sharp looking face. The tank looks a little awkward, a bit too big in my humble opinion. It’ll tuck away 22 litres of unleaded, a nod to its touring tag. The new exhaust looks massive and no doubt crammed with emission busting technology. The seat unit is where I start to get confused as there’s not too much of a rear saddle. If two-up mooching is high on your agenda, you might want to ponder this.

Being a sports tourer I would’ve liked some provisions for carrying items but there’s just a few eyelets to thread cargo hooks through. Worse is whatever you straddle to the rear of the bike hasn’t got anything to rest upon. The build quality is typical brilliant Honda, the multispoke wheels are finished in a lovely bronze colour, this theme kisses the engine covers and even the forks get a taste of the classy finish. Conventional forks host radial calipers and remind me of the forks on the early Fireblade models. The rear swing arm is a beefy bugger, the Pro Arm is part and parcel of the VFR dna ever since the FL model arrived wearing one in 1990.

The VFR dynasty goes back beyond that. The very first model was born in 1986, yes that’s thirty years ago. In those three decades much has changed, but also much remains. The V4, the heart of the VFR is the hub of the whole concept. This model features the Honda VTEC system, a clever way to get more poke from the engine, but was there really a need for this gadget on this bike? Looking at the bike won’t answer that question. Let's ride.

Fumbling with the dinky buttons on the clock set trying to find the trip reset, I realised how much I like basic dash set ups. The 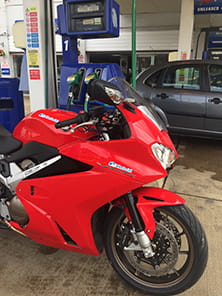 rev counter dominates the display with a mixture of contemporary and digital displays. The speedo icons look like they’ve escaped from an 80s clock radio, but are big and clear to see, even when bathed in sunlight. With the trip zeroed and the tank brimmed I was ready to head off to empty it.

I’d researched the tank range and most road test write ups quoted me around 200 to 215 miles from the 22 litre payload. Being gifted a bike to use allows me to not just travel around the UK, but also travel inside my mind. An understanding girlfriend helps too.

The longest day of the year is one of those days that’s celebrated in a variety of ways. Suddenly I had a destination, Stonehenge.

The mysterious stones hold a fascination for many. People travel from all over the world to catch a glimpse of these wonders of the world. All I have separating me from the prehistoric monuments is around 170 miles which is well within the tank range of the mighty Honda.

With the sun setting in Peterborough I head south. The Honda and me off for a bit of night riding. The first thing I notice is the headlamp, it’s spread of beam from its piercing white light is broad, but it doesn’t feel powerful enough. The first few feet of my progress is bathed in the brightest light, then it fades away, when caught in traffic the white light bounces back at you from the paint of cars in front. With the clocks informing me the air temperature was at 14 degrees and the heavy showers of the day having passed over it was a perfect night for a ride out. Accompanying me was the Strawberry Moon. I’m not a star gazer or anything but was aware of this special moon phase, beyond that it looked much like the moon on any other night. However, with my miles counting down towards Stonehenge it added to the mood.

I took the A1M down to the A421 at the Black Cat junction, then from here I headed west to pick up the M1. The roads were quiet, probably due to some England match having just finished at 10 pm. I pitted at Toddington services, just because I could. The Honda looked posh in the glow of the neon lights that dominate the entrance to the services.

I was already writing my findings of my journey so far in my head. There was one subject that was weighing heavy on my mind, the VTEC. I have owned plenty of non VTEC VFR models in the past, ridden even more. The handsome finish of the VFR doesn’t even carry a badge, or so much as a sticker stating that there’s VTEC inside. What is VTEC? Does anyone know? Most people I put the question to answered along the lines of “it’s something to do with the valves, isn’t it?”

The answer: below 7,000 revs only two of the four valves per cylinder dance to the tune of the cams, but hit 7,000 revolutions a minute and all hell breaks lose, the other valves join the knees up and will do the Hokey Cokey all the way up to and beyond the redline. 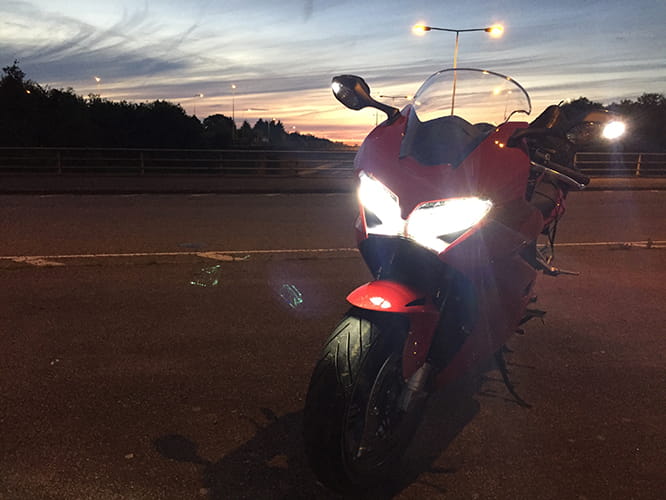 Here’s the thing, the previous VTEC 800s got mixed reviews, some people finding the power surge too extreme, which could catch people out if you were negotiating a sweeping bend and then the VTEC army kicks in. You could be mistaken for thinking VTEC acts like some mechanical nitrous oxide, propelling you towards the horizon at warp speed factor, the truth is it doesn’t. The novelty of VTEC is something Honda have stuck with on this model, but the Fireblade doesn’t get this technology? I struggle to make sense of its presence, especially when compared with those pioneering VFR750 models, they never lacked grunt or torque. The V4 configuration churns out dollops of the stuff.

Talking of novelties, the noise that the engine creates when the tip of the needle on the rev counter strikes 7k revs at first makes you smile out loud. It’s like Big Ben striking the hour, the engine internals create a chime of their own but I don’t feel the VFR needs the VTEC garb. It makes me think that if Honda sold a non VTEC based VFR alongside the fancy one I bet it would out sell it. 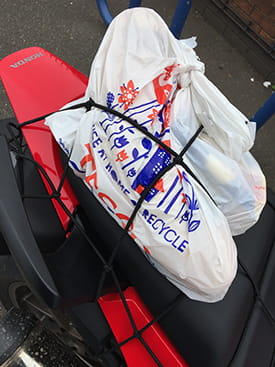 With over a hundred miles up on my trip the fuel gauge is still informing me I’ve got oodles of gas left. I’ve had clear roads and stuck to cruising speeds with the odd spurt of dancing on the gear lever to liven up the motorway miles. It’s now gone midnight and I’m heading west on the M3. The miles of carriageway repairs between junction 2 and 4 give the VFRs stability a run out. The road surface is harsh and it focuses my concentration. I have no need to exceed the 7,000 rev range thanks to miles of roadworks and a 50mph limit. I am convinced that my headlight isn’t adjusted properly. The lack of a deep pool of beam in front of me on the empty rutted road is getting all of my attention. I stop at Fleet services but can’t see any obvious way to adjust the dip angle, there’s also no road grime on the lens, for a big lamp it’s a pretty poor return of light on dark motorway stretches.

Only 60 miles to go onboard the good ship Honda. Once away from the M3 I can engage with the VFR again. It’s now heading for 2am, there’s nothing on the A303 except fresh road kill for me to avoid.

I get to Stonehenge and there’s a good vibe in the still air. Parking the Honda in the make-shift bike rank I notice an old Yamaha FJ1200. In the 90s the VFR750 was a much better bet. If I had to compare the VFR800 to the FJs natural replacement, the FJR, I wouldn’t be so confident of the Honda out touring it.

I have covered 171 miles to get to Stonehenge and my wrists feel every mile of it, I have used the inbuilt hot grips on the way, and when my hands cool I can feel that my palms and thumbs are not happy with me. The bars are a gnat’s cock to low for my liking, likewise the screen is too low for my 6 ft 3 frame. Maybe even having just a basic way to adjust the screen height would help, like my 1989 VFR750FK had years back.

The VFR is just a touch too much on the side of sports to be a serious touring option. 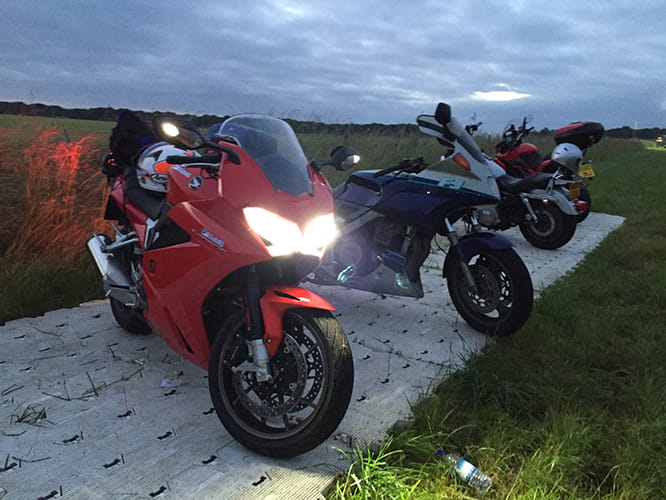 Parked in a corner of a field, a stones throw from the most famous stones on the planet, I head towards the crowds that are here to see the 4.52 am sunrise, and its’s then that it dawns on me that the VFR hasn’t had its last sunrise just yet. There’s plenty of positives, from the gorgeous build quality, to the understated presence of the solid colour finish. VTEC aside, the engine is a pearl. It’s bulletproof and will go on and on. The ride hasn’t shown up any glaring issues.

My negatives could easily be rectified with some super duper bulbs, and heavy duty earplugs to drown out the 7,000 plus drone. Like the massive blocks on stone when the sun shines on them the Honda will create a shadow, it’s got a soul. Will there be a Crossrunner in the 2046 Honda range? Only time will tell. 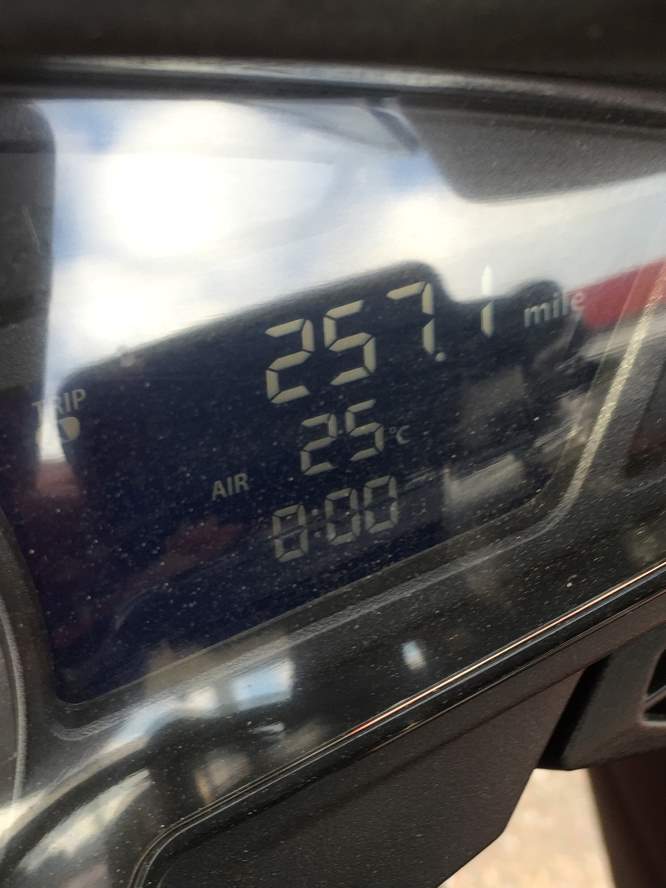 The pillion aka Nicky speaks:

I found the VFR easy to get on and off. The rear pegs are slightly too high for my liking and I would have felt happier with slightly lower pegs. This made my posture feel out. I couldn't get on with the grab handles, this is probably just me not feeling comfy.

Holding on to Scott made me feel like I was leaning forward too far, on a long ride I would worry about back pain. The seat pad itself felt generous. I like the look of the bike although it definitely feels more sports orientated from where I was sat.