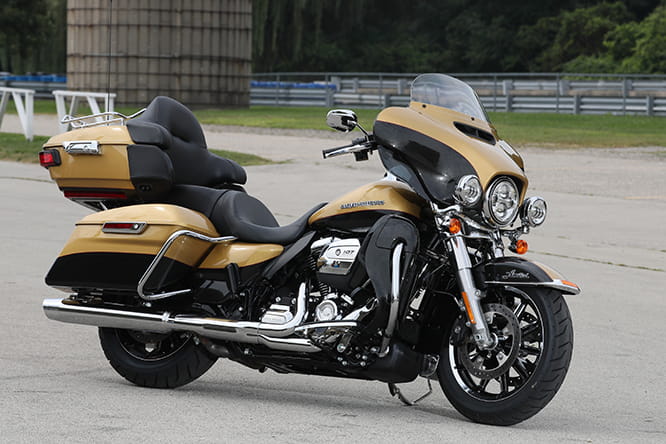 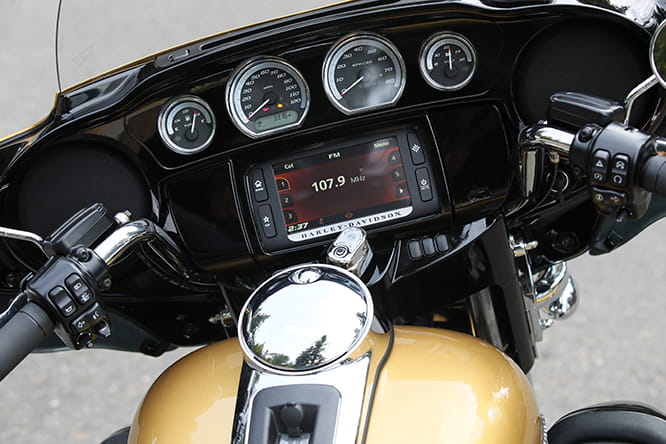 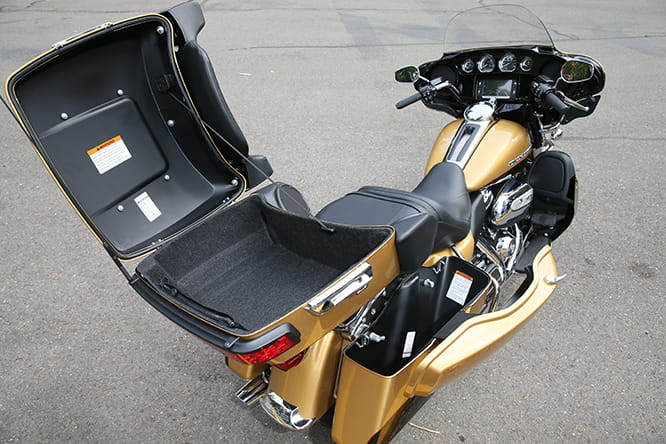 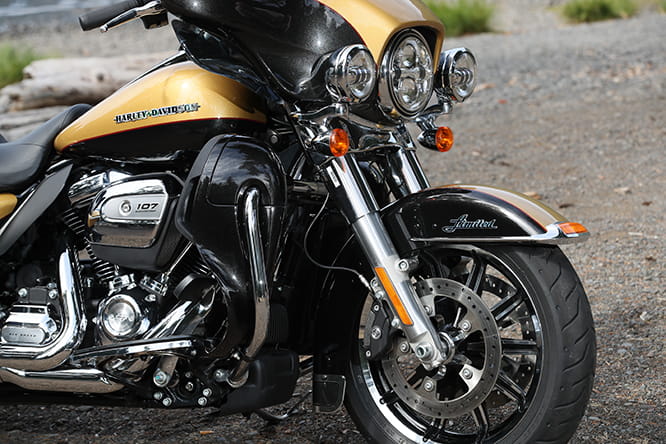 Harley-Davidson doesn’t come out with a new engine very often, so when they asked if we wanted to fly to Seattle and ride the big new 1745cc or (107ci if you’re American) Milwaukee-Eight air/oil-cooled and liquid-cooled motors in their range of touring bikes, we were on the first flight out to the United States. Here’s our first report.

Harley-Davidson don’t make a new engine very often so when they do it’s a big deal not just for Harley fans, but for motorcycling in general.

The new Milwaukee-Eight comes in a big 1745cc (107cubic inch) air/oil-cooled option in the new range of touring bikes, or a liquid-cooled 1745cc option for the Ultra Limited and Road Glide Ultra.

Limited edition Central Vehicle Operations, or CVO bikes for short, get a third engine with a massive 1870cc liquid-cooled lump otherwise known as the 114. But for now we’ll concentrate on the 1745cc air and liquid-cooled Milwaukee-Eight engines.

The motor is all-new from the ground-up and gets 11 per cent more torque versus the outgoing 103 Twin-Cam motor which came in at 1687cc. Harley also claim more power but won’t tell us how much, only quoting 112ft-lb of torque at a lowly 3250rpm. While we’re on torque, Harley’s nearest rival to this new engine is Indian’s Thunder Stroke 111 engine makes a claimed 106ft-lb of torque and comes in at 1811cc. But that’s just a claim so we’ll have t get them together in the UK soon to see how they compare.

Harley had some 30 bikes lined-up for European journalists to ride at the Seattle downtown start point, with an example of everything in the range to test, all very confusing when you’ve had four hours sleep and been awake for 27 hours the day before. So in my jet-lagged state I opted for the Harley-Davidson Ultra Limited for most of my ride the 150 miles from Seattle to Port Angeles in Washington State. The reason? Because I sat on-board a Twin-Cam 2013 version of the Ultra for 3000 miles last year when I rode Route 66, so it’s a bike and engine I’m very familiar with in all weathers and everything from 2 degree temperatures to 45 degrees in the middle of the desert. And no other bike in the world shouts Harley-Davidson like an Ultra does, especially with miles to cover in the USA.

The Ultra Limited is Harley’s ultimate touring bike hence why I chose it. It’s loud, in your face and massive. It costs too, with prices for a black bike coming in at £23,245, rising to £24,385 for a custom colour option. All bikes in the Touring range will be on sale in the UK later this month.

Weighing in at some 398kg dry weight, there’s no mistaking the Ultra. While bikes like the Street Rod Special and Road Glide Special are favourites with customisers, the Ultra is the purest touring bike in the range.

As standard it comes with an entertainment system called BOOM!, featuring a massive LED full-colour screen which features a digital radio, Bluetooth, sat nav, mobile integration, and stereo aux connection for your phone or iPod.

It’s a great set-up and easy to use with intuitive controls on each handlebar. 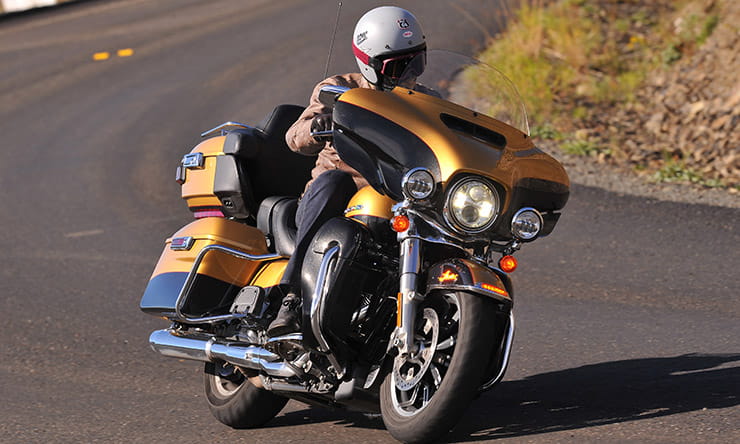 The seat is cosy and well-padded, the handlebars sweep back and make you feel comfortable the moment you get on the bike, and there’s a huge top box which can take two lids or a massive rucksack with room to spare, and panniers.

But this new bike is all about the new Milwaukee-Eight engine. At tick over it runs at lower RPM, ticking over at 850rpm, instead of 1000rpm. The new slipper clutch means ham-fisted down changes one gear too many don’t result in the rear locking up and chirping at traffic lights, and the liquid-cooled lump doesn’t make your testicles feel like they’re in a microwave when in town.

Interestingly, we rode an air-cooled Ultra 107, and a Road King Classic too (pictured below) and they appeared to run cooler in town traffic too thanks in part to Harley’s engineers and their precision oil-flow around the cylinder heads. The rear exhaust is repositioned away from the rider, as is the exhaust catalyser too. It means the whole experience is much cooler in town for rider and pillion. And, when the old bikes used to get hot and bothered the gearbox became hard to select gears and the clutch became grabby. I didn’t notice any of that on the new engine, either air/oil cooled or liquid-cooled.

In truth, apart from the cooling and a slight bit of extra smoothness and refinement I noticed, it’s hard to tell the difference between the new liquid-cooled motor and the air/oil cooled motor once out of town. They both respond well, and you can feel a definite increase in torque around 2500rpm.

What’s not been lost is any of the character of the motor. It still vibrates just enough in its rubber-mountings, and has that trademark Harley potato-potato sound. If anything the sound if richer. A lot of that is because the new engine runs quieter than the 103 Twin-Cam, meaning you hear more engine noise. It may not have quite the air intake induction noise of the old bike, but more than makes up for it with louder exhaust notes.

You can ride it lazily and it pulls cleanly. But it’s in the mid-range where you’ll notice the new motor most. At around 2500rpm the bike is doing 55mph in top gear, and when you twist the throttle it definitely feels smoother, more lively and more willing to overtake. The old bike would have needed a down change to get a similar response from the motor.

Generally, you don’t have to work the motor as hard, the bike’s torque now does it for you and makes one of the best big tourers now even easier to ride. It’s lazier and more comfortable for it. 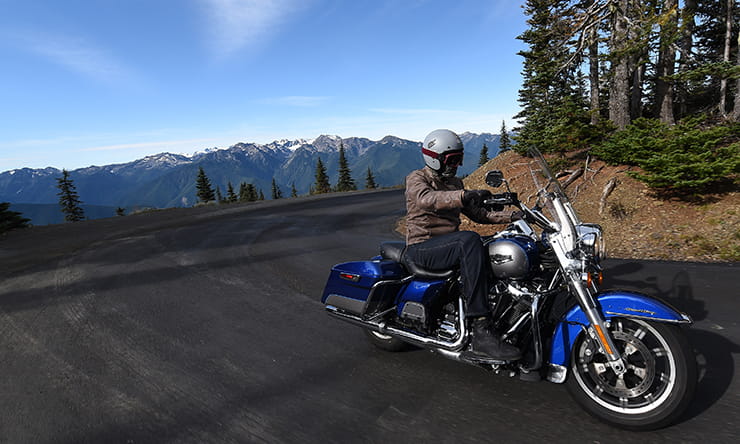 Despite its size and weight, once you get confident with an Ultra it’s easy to ride and carries it weight low. You never feel truly connected with the bike’s old suspension set-up which used to crash and bang over bumps and if you had a pillion on meant you needed an air pump to blow u the old rear air shock. It was a pain to adjust and the ride quality was average.

The new Showa forks are a massive improvement however. It’s a shame Harley didn’t go the whole hog and fit semi-active suspension like you get on big European touring bikes, but at least the new set-up is a big step in the right direction.

The forks have less dive under braking, and at speed the bike is more stable as it’s better damped. It weaves less when fully-laden at speed too, where the old bike used to wander around a bit on motorway sweeping bends. Overall, the ride quality is vastly improved and it gives the rider a better feeling when in a corner, knowing also that if you hit a bump it’s not game over. The new suspension rides the bumps better and definitely improves comfort and handling.

Riding a Harley-Davidson Ultra Limited is never about how fast you go, it’s about enjoying the ride, and taking your time, something I learnt in my 3000 miles in 12 days on one last year. But what Harley has achieved with the new range with the new engines is made the experience even more pleasurable. It sounds better, goes better, doesn’t cook the rider, and handles better. And as we roll into our overnight stop at Port Angeles some 150-miles later after a day of wet roads, towns that remind me of Twin Peaks and some stunning views, it makes me think. The bike is not a revelation, it’s an evolution. But who wouldn’t want that in a Harley touring bike? It’s all the better for it and appears to answer all the complaints their customers had about the older motor.

WHICH ENGINE IN WHICH BIKE?