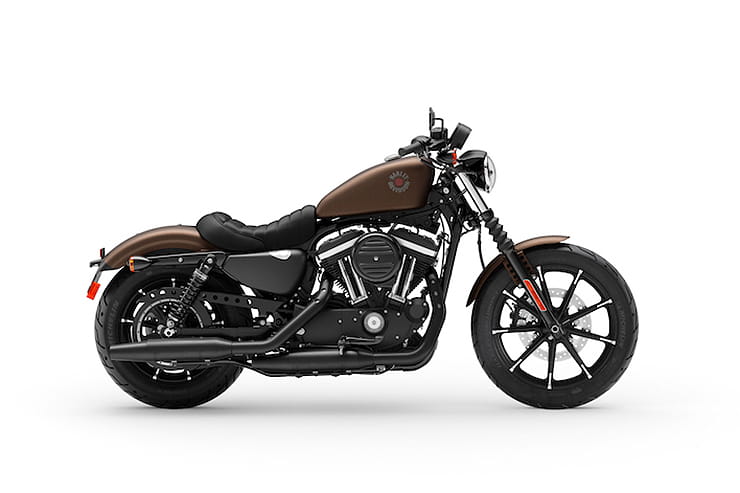 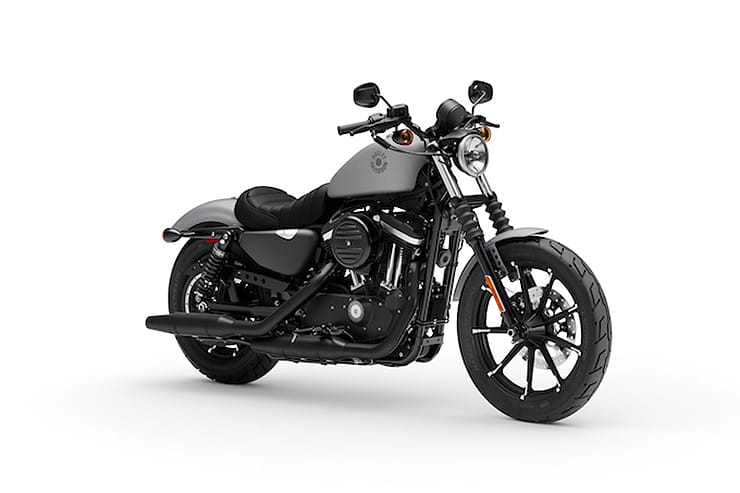 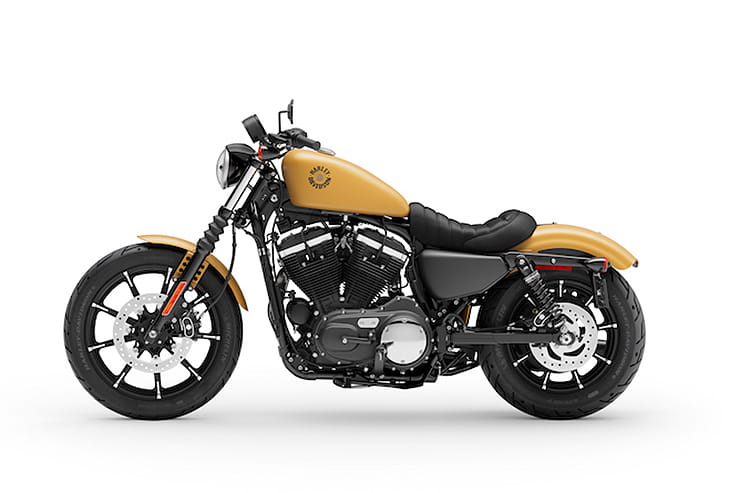 Everyone’s got an opinion on a Harley-Davidson. Love ‘em or hate ‘em, American metal is sure to spark debate. For most owners, there ain’t nothing else. Hogs have a huge and devoted following that no other brand can match. Harley ownership transcends motorcycling. It’s a lifestyle.

Harley’s smaller capacity (either 883 or 1200cc) Sportster family are its entry-level bikes and although often derided as ‘kids’ bikes’ by the Harley hardcore, and dismissed along with the other American iron as underpowered and irrelevant by many other motorcyclists, they play an important role in getting newbies into motorcycling.

The ‘blacked out, pared-down’ Iron, first introduced in 2009 then updated in 2015, is the cheapest of the bunch. As such, it remains a popular entry point into Harley ownership, even though the marque has since introduced its Indian-built Street 750 models, which, although cheaper still, have yet to gain the same kudos and following.

Conceived as the most affordable of Harley’s 882 Sportsters, the Iron was launched in 2009 at just £7,145 thanks to its minimal spec and lack of chrome with its blacked out components. Over the years its price has crept up, particularly after its most significant update in 2015, but has remained Harley’s cheapest Sportster throughout. The introduction of H-D’s new Indian-built, water-cooled Street range in 2015, starting at just over £6K gave a new entry-point to the Harley experience but those bikes have yet to engender the authenticity true Hog fans crave, maintaining the Iron’s popularity. As used buys, Harleys have always enjoyed high residual values and the Iron’s sheer popularity means you’ll struggle to find anything for much under £5K. 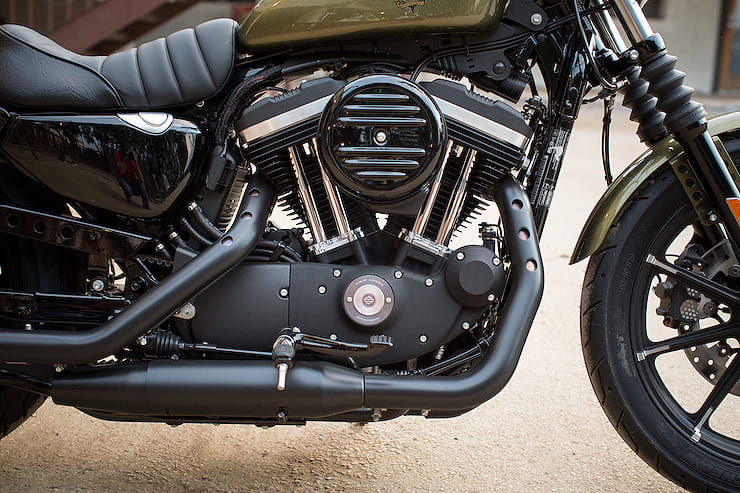 No power figures were quoted originally, although this changed from 2015, when it was officially claimed to push out 51bhp, which, as we long suspected, is no great shakes from a 900cc machine but it pushes out a healthy 70Nm of torque through the five-speed gearbox and belt final drive. Hauling around 255kg minus rider, it’s hardly going to be exciting, in fact, let’s get it out in the open now: it’s slow. But cruising along between 55-65mph it certainly put a big smile on my face and riding is an enjoyable experience, as long as you stay within the parameters in which the bike is comfortable.

The Harley-Davidson Sportster 883 Iron’s engine is both its biggest asset and most significant weakness. As ‘proper’ Harley motor, just a smaller version of, it’s a 45-degree air-cooled, pushrod-operated, V-twin just like Harley’s ‘big twins’ and with all the heritage and character that goes with it. But it’s also fairly low tech, a bit gutless and vibey as hell after 4,000rpm. To help give it decent go the five-speed gearbox’s first few gears are quite low but its operation is fairly clunky. The twin exhausts are mounted ‘shotgun’ style, both on the right, in traditional Harley style. All in all, what you’re buying is a piece of iconery (I know, it’s a made up word) and it all sounds and feels great as you sit at the lights. 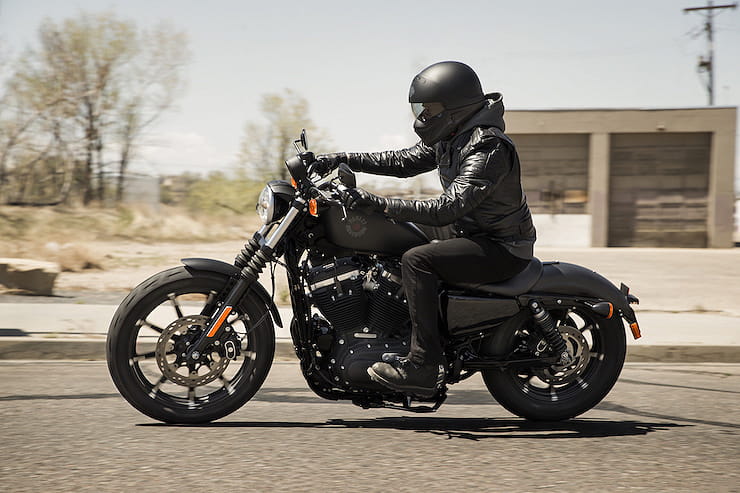 The Iron’s ‘Evolution’ 45-degree V-twin is in a fairly low state of tune and is low revving so fuel economy is fairly decent, easily returning over 50mpg. That said, the Iron’s ‘peanut’ style fuel tank is tiny at only 12.5litres and will see you searching for a fuel station after 100 miles, something not helped by the lack of a fuel gauge (although there is a low fuel warning light).

The Iron’s chassis and handling is largely as ‘old school’ as its powertrain, with the handling to match, although it was significantly improved in 2015. Frame is a conventional tubular steel double cradle holding unadjustable telescopic forks up front with twin shocks at the back. And with low pegs and a laid back, cruiser-riding position you won’t need to ride with much enthusiasm to ground the foot pegs through corners. Despite it’s diminutive size, the Iron, although small and light-ish for a Harley, is still a heavy bike overall. In 2015 it received new brakes and suspension, by Showa, comprising forks with much improved damping and shocks that were now preload adjustable through 50mm, both giving a much improved ride although, being fairly short travel, bumpy surfaces will still catch them out. 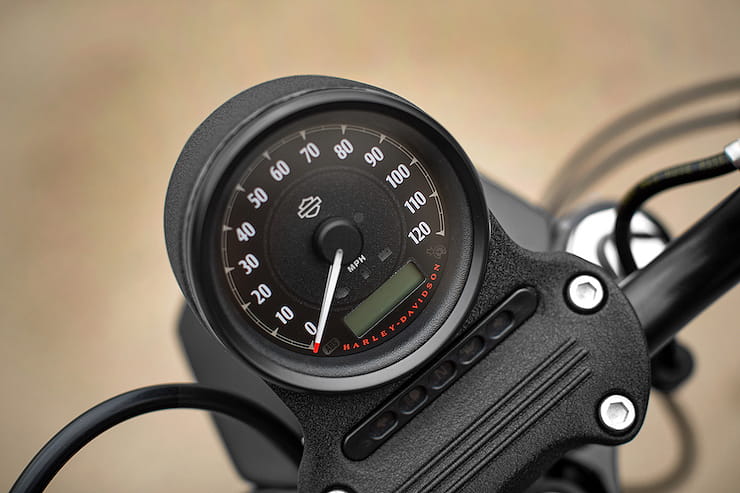 The pared-back Iron’s brakes, too, are nothing to get excited about, although, again, since 2015, they’re much improved. At the front there’s a single front disc, which requires the assistance of the similar rear to haul up all that weight if pushed hard. Up to 2017 ABS was also only available as an option. Again, all were improved from 2015 with updated calipers by Brembo, although they’re not labelled as such. These give a lot more bite, and feel better at the lever, but still require a bit of effort to pull up in a hurry, although most examples are unlikely to be ridden hard enough to trouble them.

All Sportsters are smaller, more basic Harleys and the Iron is the most pared down of the bunch with only a solo seat and no weather protection so you shouldn’t be expecting much by way of long distance comfort and nor is it a tourer. That said, the single perch is reasonably comfortable and short journeys won’t be a problem.

As mentioned earlier, the Iron is the cheapest, most basic entry point into ‘proper’ Harley V-twins so there isn’t much by way of equipment, although twin channel ABS does at least now come as standard. The single dial displays speed, rpm via the digital display, plus there’s a gear indicator and two trips toggle-able via a rocker switch on the left bar – but that’s your lot. There isn’t even a fuel gauge. On the plus side, the keyless ignition is superb and does away with the problem of fumbling for keys with gloved hands – simply stick the fob in your pocket and as you approach the bike it deactivates the alarm and turns on the ignition. At the other end, simply switch the bike off and as you dismount the alarm gives a reassuring ‘bleep’ to confirm its armed again. The engine won’t start without the fob in proximity, and even sitting on the bike will set of a warning alarm.

The Iron’s also well built and, being a Harley, an owner has the option of a whole range of accessory parts to give owners a chance to really personalise their machines. 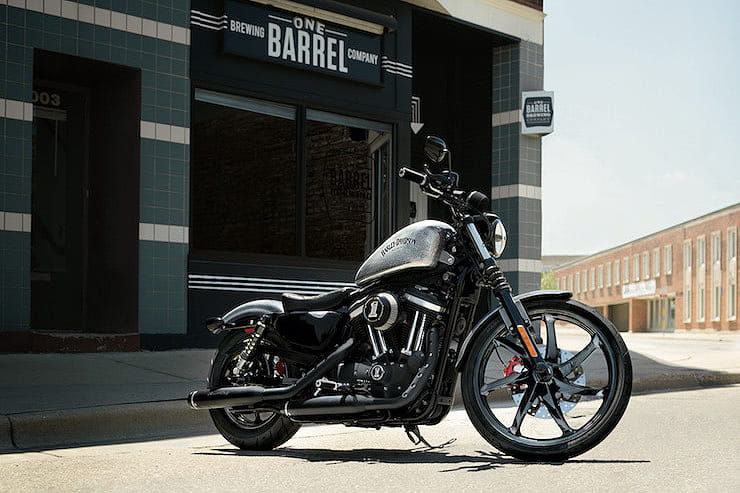 A week with the entry level Iron 883TM (don’t forget that TM – you’re buying a brand as much as a motorcycle!) raised my status from middle-aged dad to Hollywood rock star in a stroke. It was almost impossible to park up without some kind of flattering comment about my choice of transport. Harleys are cool. End of.

There are better bikes out there for the money for sure. If you wanted handling you’d be looking at something like Yamaha MT-07 or Triumph Street Triple. But as you’re reading this, chances are you are in the market for something a bit different. The Japanese companies all make Harley clones, which are all competent bikes but lack the character and cache of the American machines. I’m sure that many buyers, if they are even considering other brands, may well be looking at bikes like the Ducati Scrambler or Triumph Bonneville – entry level bikes with the right badge on the tank

What even those iconic brands won’t give you is entry to the Harley fraternity. Whether or not that is a good thing or not is for you to decide, but with over a million members in the Harley Owners Group (HOG), you will certainly be buying something more than just a motorcycle.

It might not be everyone’s cup of cappuccino, but the baby Harley has plenty to offer.


Three things we love about the 883 Iron…