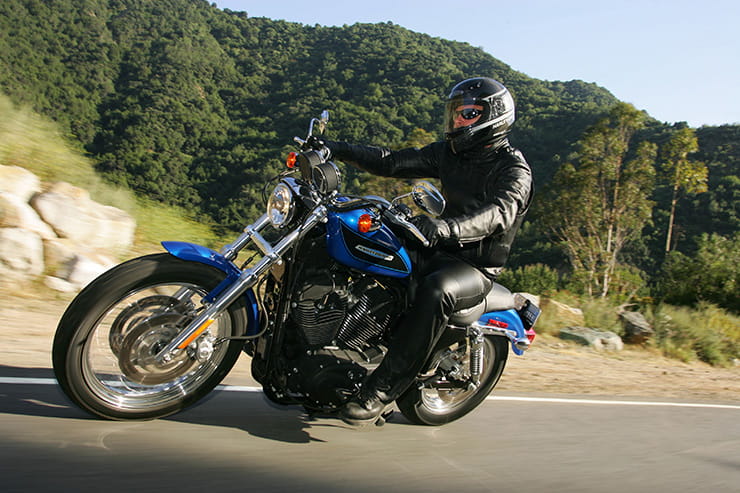 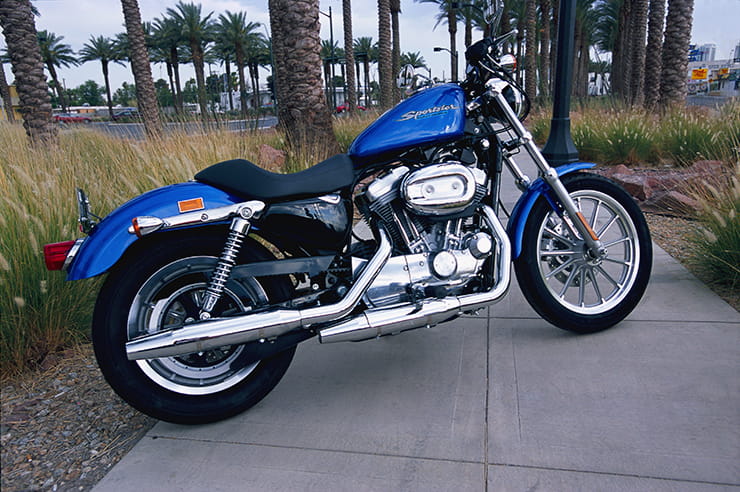 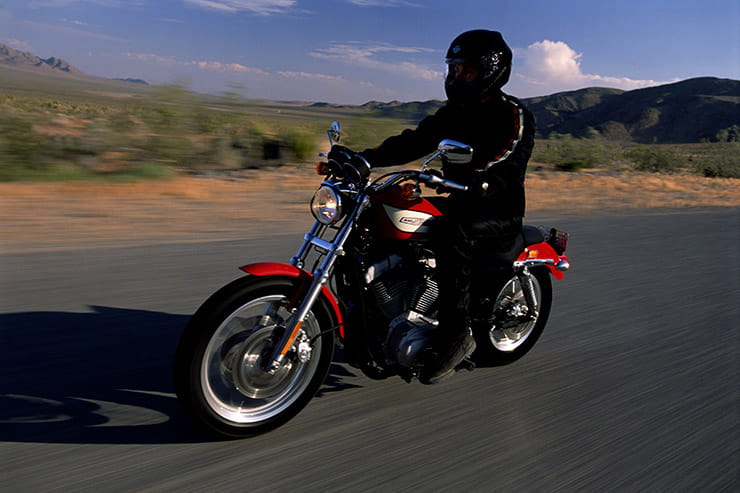 Introduced in 1986 in 883 and 1100 guises before growing to 1200 in 1988, Harley’s Sportster family (the name was first used by Harley in 1957) has always been designed as the easy access point into the famous American brand. Far cheaper and lighter than the more traditional full-dress models, yet still powered by that classic 45-degree air-cooled V-twin with its ‘potato, potato’ soundtrack, the stripped-down Sportster models are ripe for customisation, look authentic and are a great way to live the American dream if your budget is tight.

In 2004 Harley-Davidson made substantial changes to both Sportster model’s motors, however as they are essentially the same Evolution engine aside from changes to alter its capacity, the updates apply to both models. As well as being rubber-mounted within the frame, the XL Evolution powertrain was substantially evolved to meet the demands of modern motorcyclists. While still retaining the classic 45-degree angle and air-cooling, as well as the 883cc and 1202cc capacities of before through an identical bore and stroke, new cylinders and heads with larger fins and oil jets directed at the bottom of the pistons aided cooling to help meet emission regulations and increase performance. These changes, aligned with lighter pistons and conrods, saw both bikes’ redlines boosted by 500rpm to 6000rpm with overall performance upped by 15%. In addition, changes to the motor’s covers saw them retain oil better and prevent leaks while a new flywheel-determined timing system reduced complexity and improved accuracy of the spark. Visually, Harley restyled the primary, sprocket and derby covers as well as the air cleaner cover while two-piece rocker box covers set the updated motor aside from the outgoing Evolution engine. In 2007 fuel-injection was added alongside re-profiled cams to both bikes while the clutch lever’s effort was also reduced by 14%. 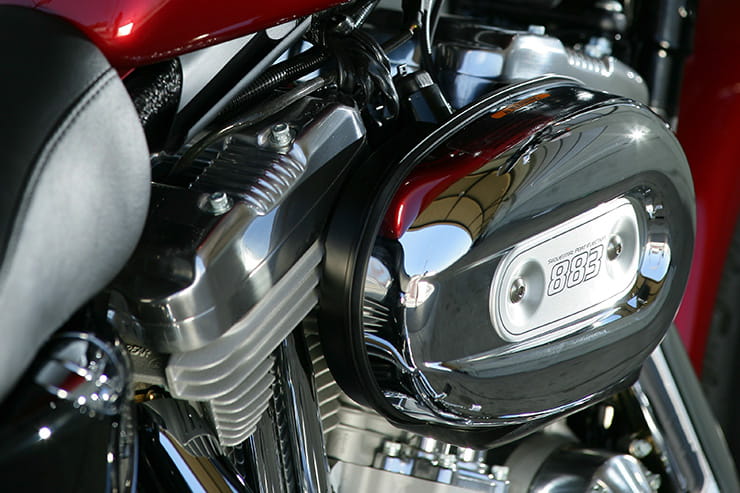 Fuel injection was added in 2007

Amazingly, Harley claimed that the updated 2004 Sportster chassis was 126% stiffer than before – demonstrating just how wobbly the outgoing model was! Still made from tubular steel in a twin-cradle design it features a host of new elements, the most significant of which is the motor being rubber mounted rather than rigidly set. A new three tie-link securing the motor within the chassis also improved the Sportsters’ handling while repositioning the battery and oil tank under the seat not only allowed Harley to give the bikes a more comfortable riding position, but also made it visually cleaner and symmetrical. Finally, a 17-litre tank replaced the old 12.5-litre unit while keeping the traditional ‘peanut’ profile and a steering head lock was added.

You don’t get much in the way of suspension and both Sportster models feature fairly basic 39mm forks that lack any form of adjustment while the twin shocks only get step-preload adjustment.

As with the suspension, you don’t get much in the way of cutting-edge braking with a single two-piston sliding caliper at the front (some Sportster 1200 models ran twin discs) and a single-piston on the rear, both gripping a 292mm disc. ABS arrived in 2014. Harley have altered the wheels in both their size and construction over the years depending on styling with the cheaper 883 models generally featuring cast wheels and the 1200 spoke items. 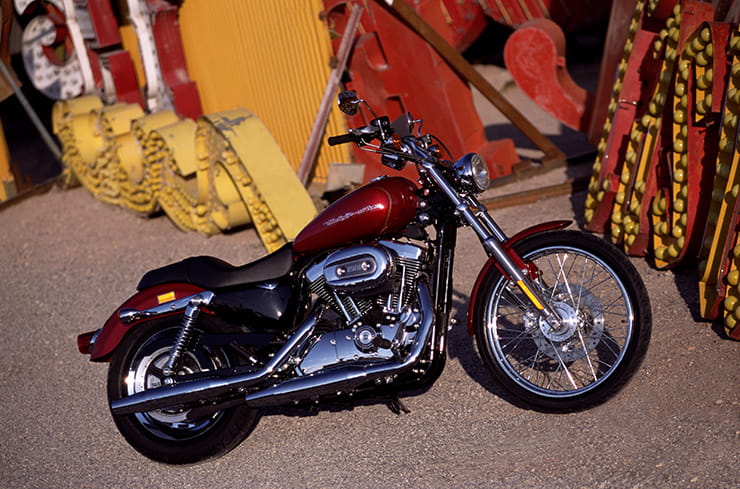 The single-disc of the XL1200C

ABS arrived in 2014, and a keyless ignition was added in 2007 alongside fuel-injection, but aside from an immobilisor that’s your lot.

You either like the cruiser stance or you don’t, it’s as simple as that and Harleys aren’t uncomfortable to ride. If you want to cover distance or cruise the streets you can add a myriad of different screens, pegs or bars to customise your Sportster to suit its intended use.

There isn’t much in the way of pillion comfort on this stripped-back bike, however a sissy bar does help maters slightly. Not great pillion bikes, but far better than the pre-2004 non-rubber mounted engine models! 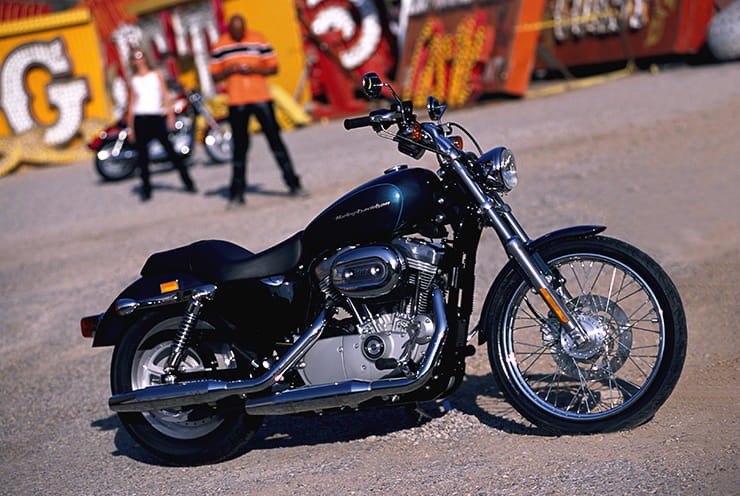 The rubber-mounting of the Sportster models’ engine radically transformed both bikes and to most Harley fans it was a massive improvement. Gone was the hideous vibration that plagued the old model, replaced by a far smother machine that delivered a ride quality that was hitherto unheard of. This huge improvement in comfort levels, not to mention a more than welcome boost in performance and handling, moved the Harley from a bike that felt somewhat stuck in the past into a bike that was actually far more contemporary. And when fuel-injection arrived a few years later it brought with it even more refinement. While the traditional Harley buyer may like to harp on about carbs and character vibrations, the truth of the matter was that modern riders didn’t want annoying vibes, oil leaks staining their drives or carbs that made starting the bike an art form. These updates made both Sportster models far more ‘turn-key and ride’ – and therefore perfect for the modern generation of rider who had no interest in working on their bike’s mechanicals.

While Harley have updated the 883 and 1200 a bit over the years, as long as you buy a post-2004 model you are effectively getting the same bike as a modern Sportster – and that’s no bad thing. As well as looking the part, the 883 and 1200 ride as you would expect a traditional Harley to. They aren’t the fastest or best stopping bikes out there, but they sound, feel and look correct and have that all-important Harley-Davidson name on their tank. For gentle cruising, they rule and the huge Harley Parts and Accessories catalogue means you can customise them until your heart’s content. As many riders merrily do… 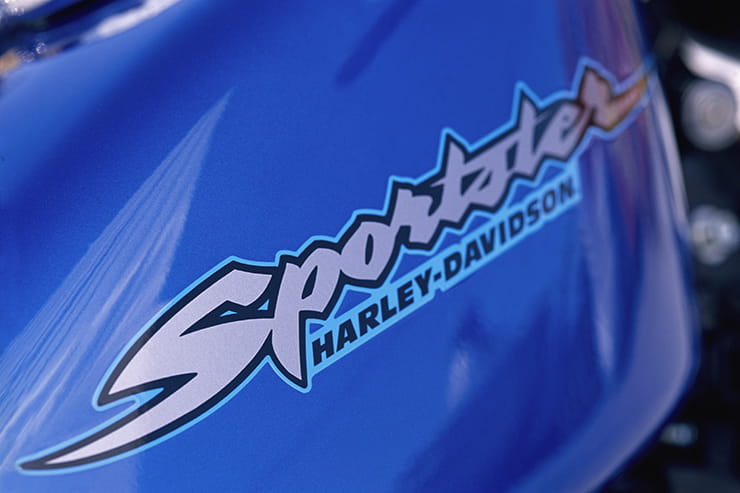 Despite their ‘budget’ price tag, the level of finish is actually pretty good on Sportster models and most are very well cared for. However there are a few areas of concern and they depend on the model and style of Sportster you are buying.

If you are looking at a bike with spoke wheels always check where the spokes meet the rims as water collects here and can cause corrosion to set in, ironically this is more prevalent in bikes that are washed regularly and put away wet! If you are looking at an early 883 with cast wheel then check the wheels carefully as corrosion can set in under the lacquer (later models’ wheels weren’t lacquered) causing the paint to lift and flake. On both the 883 and 1200 the reg/rec’s position at the front of the motor makes it susceptible to corrosion due to stone chips exposing the metal beneath. Generally if the bike looks in good condition then you should be safe. Next up are the consumables.

Always give the drive belt and its pulleys a good inspection (especially on bikes that lack a lower protection cover or have had the cover removed) as stones can get under the belt, causing it to tear. Replacing is a hassle and can be expensive on an item that can last as many as 40,000 miles! It’s unlikely that a bike’s suspension will be worn, but always give it an inspection, and also check discs and pads for life. Now we need to talk performance additions…

Extras do boost the value of a used Harley, but only ones that everyone wants and that doesn’t necessarily mean a custom paintjob with unicorns or flaming skulls. Official Harley extras are great to have and everyone loves a loud pipe – just make sure the fuel-injection or carbs have been modified to suit or the motor can be damaged through running lean. If the bike has panniers look behind them for corrosion as they can trap water and be very wary of extreme modifications that involve the wiring loom being altered as this is a slippery slope to horrific electrical gremlins. Finally, it is always worth nothing that any official Harley dealer can offer year’s warranty on a bike up to 15-years old and 70,000-miles, so it may be worth paying a bit more and buying through a dealer for that extra peace of mind. 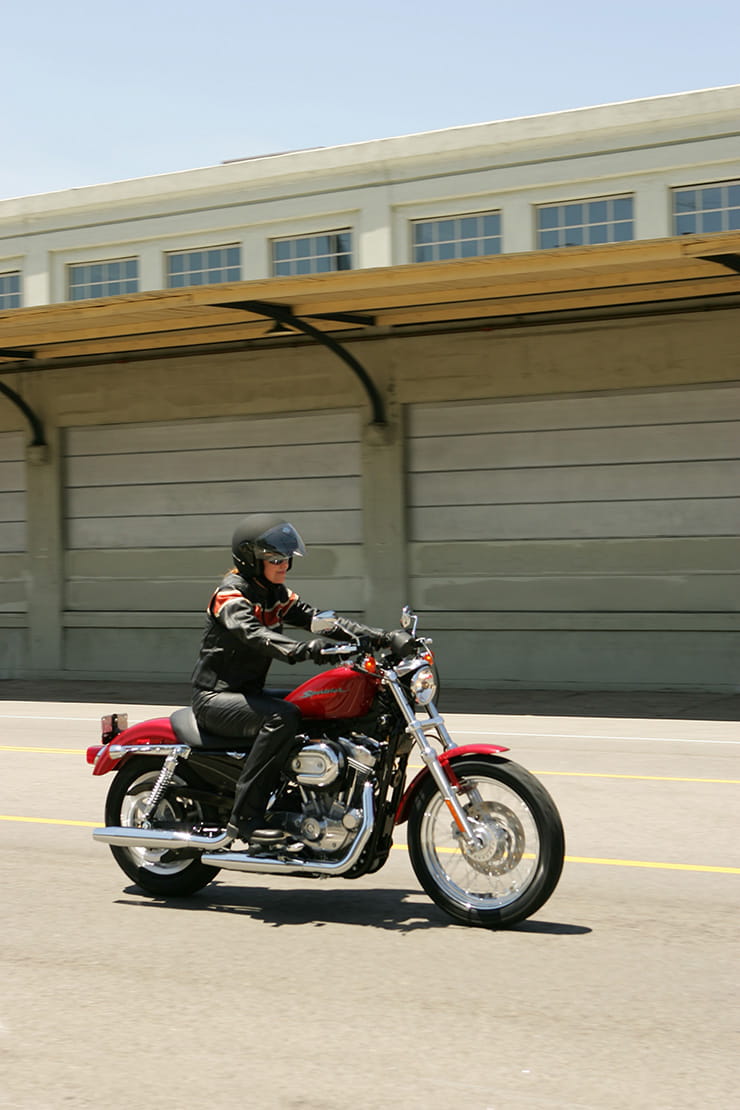 Prior to 2004, both Sportster models’ motors lacked rubber mounting, making them vibrate like a jackhammer. Some call this character, others describe it as hideous and reckon it ruins the ride quality. If you are even considering taking a pillion, buy one that was built post-2004 and has the rubber-mounted motor or your pillion will hate you as the vibrations are even worse on the back. In 2007 fuel-injection replaced the carbs on both Sportster models, a feature that rather predictably also splits opinions. If you want a bike that starts on the button, buy an injected model over a carbed one. Other than styling, and there have been a lot of different model variations of Sportster over the years, the only other addition of note was ABS, which arrived in 2014 alongside the option of a keyless ignition, new clocks and slight engine tweaks to allow it to meet emissions regulations through a new catalytic converter and increased compression ratio.

Weight: 265kg (varies depending on model)