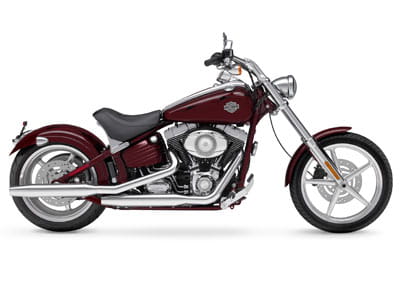 In a Harley showroom full of custom cruisers, the Rocker C stands tall as a factory produced chopper – and the best you’ll ever get for the money. Dressed in chromed parts and stand-out blue or deep red paintwork, this has to be the best dressed Harley to ‘potato-potato’ (the Americans claim this is the sound to be heard from a Harley-Davidson exhaust) its way out of a Harley production line.

With its raked out front end, tall profile front tyre to give the impression of tall skinny wheel size and whopping 240-section rear tyre, you’d be forgiven for thinking the Rocker C is a one-off customisation project from some obscure European custom shed. But it’s not. It’s a Harley-Dee that had imagination placed into its styling – for a change.

Forget about power output from the Twin-cam 96B, 1584cc air-cooled V-twin engine. A Harley isn’t about power. Instead think about the claimed 92ft lbs of torque that kicks in very early in the short rev range. It’s the sort of torque delivery a tractor has – plenty, well spread and pulls bike and rider easily. And will often outgun a 1,000cc sports bike from the lights. It also makes for effortless cruisin’ and meagre fuel consumption and keeps gear swaps to a minimum. Just as well because gear selection can sound like cannon fire.

Steep and wide bars pitched together with feet forward footpegs are a pain to use if you’re of average build and height – one day Harley will click on to the fact that Europeans aren’t built to Neanderthal specification. Most of the time you’ll be holding the bars by fingertip while boot heels drag the road. Moving your bum onto the back of the tank offers some relief.

Two neat touches to make friends coo with amazement are the hidden pillion seat that unfolds from under the rider’s seat in seconds. It’s not really a seat as we know it but a pad to stop anyone wanting a lift from sitting on the rear fender, which is touch two. The rear fender is actually bolted to the swingarm, hugger fashion, so it moves up and down in tune with the rear wheel to retain a slammed, cut-down stance.

It is said beauty is only skin deep. Harley’s Rocker C is an exception by being as beautiful as it is long – a 2413mm wheelbase as standard is massively long.