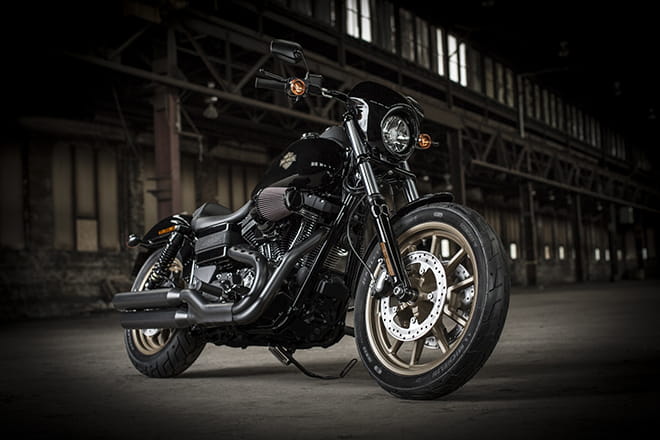 The biggest engine fitted to a production Harley-Davidson powers the new Dyna Low-Rider S – an 1801cc, Screamin’ Eagle powered Twin Cam beast that more than lives up to its performance-based Harley FXR roots with a massive 115ft-lb of torque. We rode the bike today in the South of France, here’s our man Marc Potter’s verdict.

If a new series of the epic drama Sons of Anarchy is ever made then this should be the bike for the lead character, Jacks. If you don't know it, it’s a big show about a biker gang that runs drugs, guns and all kinds of illegal goods across America. Crime doesn’t pay kids, but if they do make another series then the whole gang should be riding the Dyna Low-Rider S. It is the epitome of bad-ass.

This bike would get a role in the show without an audition. Bad to the bone. So hard that you feel like you need to be wearing Love/Hate tats on your knuckles, tough stickers all up your arms, a .44 Magnum tucked on your back, and of course your club’s ‘cut’ on your back.

That’s of course if you can get your hands on one. They're selling fast but Harley say you can still buy one of the £14,995 bikes. 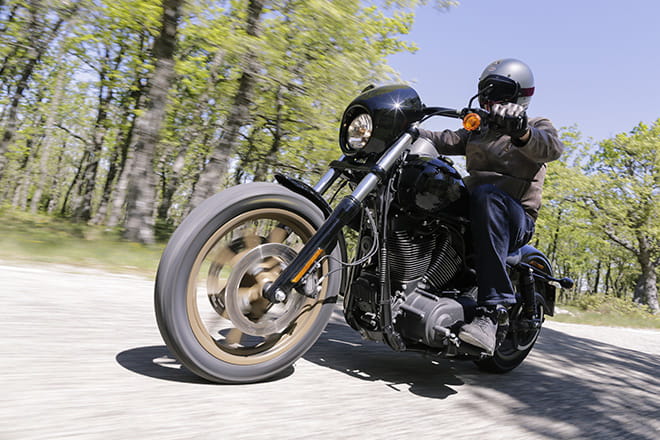 After riding it from Marseille to St Tropez, you can see why there's so much interest in the bike.

It's all about that engine. It’s imposing to look at and absolutely staggering to ride. A proper, laugh out loud powerhouse of a drag bike, but one that’s not scared of corners either. I’ve ridden Harleys for years, been up, down and across America on them, ridden ultra-rare and expensive factory custom Harley CVO bikes, but not since the launch of the V-Rod 15 years ago, has one put this much of a smile on my face.

That 110 cubic inch, or 1801cc, Twin-Cam Screamin' Eagle special is the biggest Harley engine fitted in the factory on a production bike. That big ram-air intake on the side of the bike and those gloriously blacker than black twin side exit stacked pipes make way more noise than their Euro 4 friendly spec should suggest. It's an incredible induction noise, sucking in small French insects and blowing them out the back in a rage of V-twin glory. There’s a road on the intake, and a subtle rattle when you shut off. You’d swear that it had been fitted as an aftermarket upgrade, but this is true, factory custom badness (in a good way) for less than £15,000.

It may look, long, low and mean with the shape of the archetypal dragster style cruise, with styling that echoes the aforementioned FXRs.

That's the aim, it’s Harley’s inspiration, and it works.

This is the latest bike in the Dark Custom range alongside the Sportster-based Roadster we're also testing today.

Essentially, Dark Custom is Harley's attempt at getting younger people on to Harleys. 35+ is the aim, and it appears to be working. Think blacked-out engine rather than chrome. A whole kicked-back, stripped-down look.  It would be hard to see a Dark Custom tourer for instance. This is about the simpler things. It’s an S too, so that means performance upgrades a plenty, hence the Screamin ‘Eagle motor. But essentially the Dark Custom bikes are simple bikes with big engines and good chassis'.

Think of them as rider with checked shirt and baseball cap than leather chaps. Unless you're in Sons of Anarchy of course. And based on how fast they've been selling them then it's bang on the money too.

The hype on that engine means it's no surprise when you hit the throttle and make full use of the back rest. It’s not optional. It will make you hang on to those fat, wide bars. It's a single seat and all the better for it. No pillion in their right mind would want to sit on the back and feel the full force of that 115ft-lb of torque. No power claim is made, but it must be getting on for 130bhp, maybe? 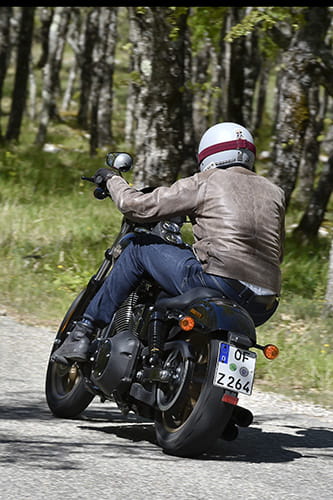 The meat of the engine is between 2500rpm and 5000rpm. There's a redline at 5500rpm, but after a day's riding I never found it. That's not what this bike is. It may be a performance cruiser in the greatest hot rod, dragster style, but you never need to rev it. It's all about the torque, the low-down punch, Pretending you're Jacks from Sons of Anarchy out running the Mayan gangsters, SoA back patch blowing in the breeze.

The good part is that although that magnesium colour front wheel looks miles away to give the bike that long, low and mean stance, it feels good when you ride it. On bumps, the short travel suspension soon finds its limit of travel and the back shocks kick you out of the seat when it's really bumpy. But most of the time the handling is spot-on. Myself and experienced journalist Roland Brown couldn't believe how fast you could ride it if the mood takes you.

There are no gimmicks, no traction control, no rider modes, just a great, beautiful black lump of a motor, a good chassis and some of the coolest styling seen on any Harley in the range. The team behind the bike admit they spend a lot of time in the museum looking at past masters in the Harley range for inspiration, but then combine it with what's happening on the street, bringing ideas bang into the now.

Look over the bike and the Dark Custom details is everywhere from the magnesium lookalike wheels, the black pipes the black mirrors, blacked-out Harley logo and even blacked-out clocks. There's two on the tank, one for revs and a digital display for trip, gear, mileage, or time. The other one is the rev-counter. In truth they're hard to see, and would maybe look better in the small screen, but that's a personal preference.

As we ride in to San Tropez after some 120-miles in the saddle the roar of Harleys is enough to get tourists turning their heads. No other bike other than a Ducati, and maybe a Triumph has the same affect as a Harley.

It's not just the brand, the Milwaukee history, and 113 years of building bikes with the most recognised badge in the world that make Harley what it is today, but it all helps. Overall though it's bikes like the Low-Rider S that confirm that when Harley get it right, they really get it right. 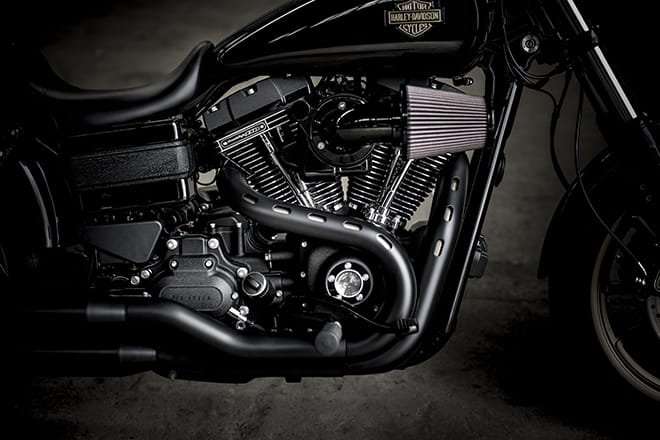 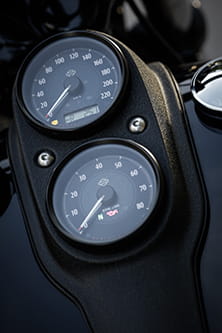 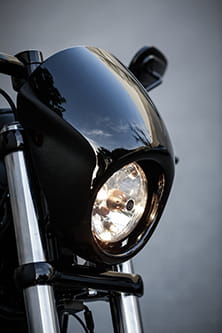 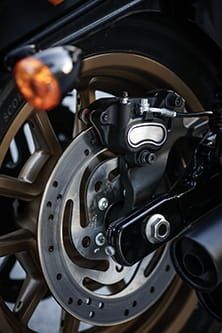