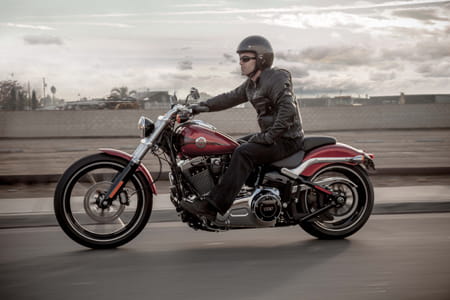 There’s nothing like a spot of brilliant, bone-warming sun to make a bike look good. So when Harley-Davidson decided to launch its new Breakout model in the coastal city of Marseille, eyes and praying hands went skywards. It did the trick. Glorious sunshine from the moment morning broke and netted dry roads with 17-degrees of warmth. With that lot soaking the new Breakout, it was all too easy to get ga-ga about America’s greatest V-twin producer.

To be fair, the new Breakout, part of Harley’s 2013 Softail range – identified by the absence of rear suspension, which is actually hidden underneath the bike to give the famed hardtail look – didn’t need much sun to enhance the stunning paint finish, brilliant hard chromed or polished ally parts. They all stand out a mile in any conditions.

A huge 240-section rear tyre grabs anyone’s attention when viewed directly from the rear. Long forks suddenly stop with flat drag-style bars and a single clock fascia bolted but hanging down from the bar clamps help play out a very long and low profile. With the black 103cu (1690cc) engine highlighted with plain alloy cooling fins and polished case covers, the Breakout looks every bit as muscular as its liquid-cooled V-Rod boulevard bruising brothers.This resemblance is backed up with the fitment of ‘Gasser-style’ wheels which are a nod to US racing cars that became popular after the prohibition era.

The Breakout can handle sweeping A-road action as long as the throttle is applied. Shutting off mid-turn causes the suspension to load up and the Breakout’s pegs to grind out. The chassis is also good enough to be hustled at a good pace. Ok, so the footpegs’ angle sensors are overly long…

Helping to achieve clean getaways is a fuel injected, 1690cc V-twin lump with sedate throttle action in the first few gears. With a claimed 96ft-lb of torque delivered in the time a sneeze occurs (yes, it has a low, low rev ceiling) it needs that non-giving aspect with the first quarter of the throttle twisting. Big handfuls with the wheels moving gives a definite wave of momentum – the increase in wind pressure tells you that much. But it’s the big V-twin’s power pulses smoothing out to minimal vibes and road furniture rushing past that underlines the fact the Breakout is no slouch when dinner is on the table.

With a running weight of 322kg and mostly placed low to the ground it takes some effort to haul the Breakout to a stop if relying on the single front disc set-up. No wonder Harley has graced the Breakout with a rear brake pedal. That chromed steel pedal needs applying more than, say, most bikes – good to see the Gasser wheel in full from one side but I would prefer the sight and effect of a second disc and caliper.

So even though fingers are strained around the front brake lever the effect isn’t totally felt until the front wheel kicks off a bump, lands and squeals in locked up protest before the ABS briefly kicks in. Not that I’m complaining about ABS; I’m all for mental comfort on a weighty bike like this.

In the growing world of Harley ownership the Breakout is every inch (and kilo) the street cruiser it’s designed to be. Big. Bold and noticeable. Drool-worthy too if the amount of heads it turns is anything to go by – but what Harley doesn’t? The red Breakout screams look at me, while the blue and gloss black versions are slightly subdued but still pull looks. If that isn't enough, Harley also has a book full of Genuine Parts and Accessories.