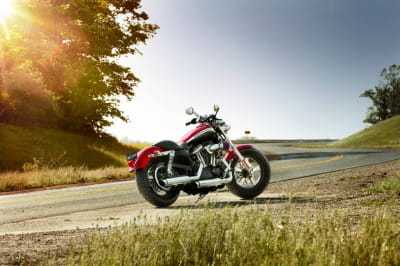 The Harley-Davidson 1200 Custom is one of the most popular bikes in the vast Harley line up. It’s easy to figure this because for the relatively affordable price you get an almighty slice of American custom metal. And, it’s an immediately likeable and recognisable slice of metal – as we know, the brand name exudes class and captures admirers everywhere.

Like all Harleys, the 1200 Custom is powered by an air-cooled V-twin that has more character than anything the Japanese manufacturers could throw at it. Yes, it shakes rattles and rolls within its steel frame but ultimately this is what Harley is famous for.

The engine isn’t endowed with great power – Harley-Davidson doesn’t even quote horsepower output – but instead makes good use of the ample low rpm torque it kicks out. Effortless cruising with a throbbing V-twin beat is where the 1200 Custom is at. But if you want to draw even more attraction, then its torque can be usefully applied from the lights.

It’s an old design with modern touches of electronic ignition and fuel injection to make the engine clean and extremely reliable. Even the gearbox is modern in behaviour compared to the slow-to-shift boxes of old. The downside of modern engineering to meet emissions laws and regulations is the fact the 1200 Custom is begging for a slightly freer breathing exhaust – you’ve got a Harley and you at least want it to sound like a Harley.

As a Custom model you get feet-forward footpegs and tall bars. It takes some getting used to especially the draught up your armoured trouser legs. It doesn’t help if you’ve got a 29-31-inch inside leg; Harley must think all buyers stand 6ft tall and have size 10 boots and obviously built their bikes to suit! The pegs are a stretch to comfortably place both feet on if, like me, you’re only 5ft 7in.

While Harley has finally figured out that front suspension needs to work correctly to provide a comfortable ride, it is taking its time to fit decent twin rear shock absorbers to the Custom. As standard, they soon use up their travel and a big bump can be felt through the spine like a drop kick to the bottom. Getting your Harley dealer to adjust the rear spring preload helps calm things down.

For 2013, Harley-Davidson has introduced two Limited Edition 1200 Customs. The A model comes with cast aluminium wheels and drag style (flat) bars, and a two-tone paint scheme. This bike looks a million dollars and is made better with the adoption of midway footpegs, or normal pegs to you and me. It is such a good bike to ride that the B version with wire wheels and mini-ape bars doesn’t get a look in.