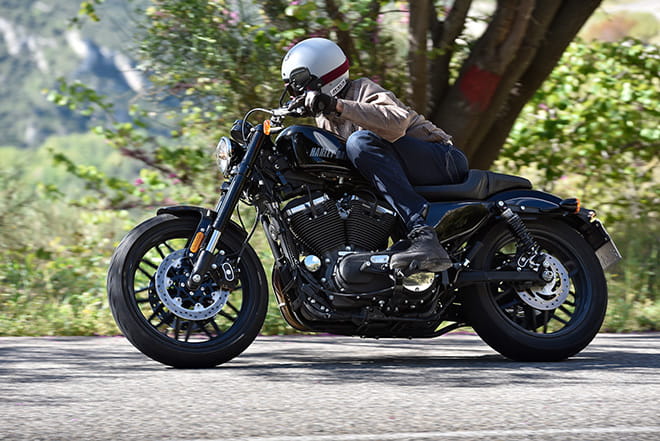 Take a Harley-Davidson Sportster 1200 and strip it to the bone. Add in a whole dose of Fifties and Sixties hot rod, drag-strip flavour, throw in some adjustable rear shocks, a menacing stance, a set of upside down forks and twin discs with ABS and you’ve got the new Harley-Davidson Roadster.

Built around the concept of a stripped-back Harley-Davidson Sportster, the new Roadster gives off a laid-back super cool attitude that’s just gagging to get a set of noisy pipes on it.

Parked at the launch in Marseille the £9695 Harley looks every bit like it belongs on the road to St Tropez among the beautiful people.

"It's a rider's bike for riders who want to ride aggressively", says Harley-Davidson Industrial designer, Ben McGinley. You can tell that from the twin front discs, the sporty riding position and those fat 43mm upside down front forks.

This is the Harley-Davidson Sportster Roadster and we’re at the world launch in the South of France to ride the bike from Marseille to St Tropez and back. We haven’t seen a sportier Harley since the XR1200 launched back in 2008, itself a Harley that handled but with way more flat track routes and pretensions than this – the sportiest Sportster yet.

And there's no better way to prove its sporting credentials than by following Harley Europe’s lead rider, former test rider for Performance Bikes and SuperBike magazine, Alex Hearn on a Harley Sportster 48.

He's a great rider and getting a move on. The 48 is running out of ground-clearance, the low-slung pipes are close to digging in and he’s having to ride within the bike’s limitations. It’s a Bobber, so the fact it’s even going this well shows how good the 48 is, and how good the rider is.

Sat behind on the new 1200cc Sportster-based Harley-Davidson Roadster and I’m making the most of its extra ground clearance, longer suspension and jacked-up stance. The way it sits is more aggressive too. The back is lifted up so it sits more on its nose and I'm making the most of that trying to follow Hearn. That means it turns in faster too, and the kind of left-right-left flip-flop corners are proving no problem for the Roadster. It handles like a normal bike rather than a cruiser, and you can feel those fat upside down forks working, feel what the front tyre is doing. The tyres may not be the stickiest, but they’re more than adequate.

The bike's pegs will touch down, eventually of course, and maybe the hero blobs are just a bit too long, but it goes round corners well.  Harley say it's the sportiest Sportster to date, a sporty bike (said with a wink in the eye by Harley staff). But it works. Works well in fact.

It’s good in the bends, has enough grunt out of them and the brakes work as they should too. It reminds me a lot of the old Triumph Thruxton in many ways. 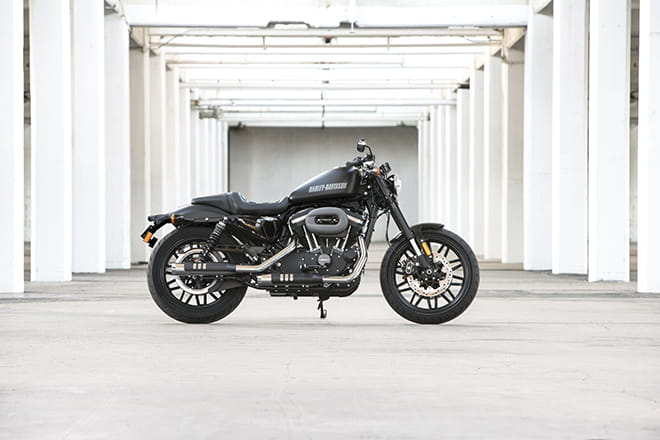 The natural, slim and narrow Sportster and that traditional air-cooled 1200 V-twin is the same motor and basic steel chassis we know and love. But it now looks better, sits more purposeful and takes on a whole new look and stance. The only one that may look even cooler is the 48, but that’s up for debate. It depends what you’re into, and that’s what the whole Harley Dark Custom vibe is meant to offer. It’s designed for a younger rider than the typical Harley customer. Choose a bike you like from the Dark Custom range, then make it how you want. I’m digging the whole concept.

As we exit the morning rush in the packed city streets of Marseille, the bike is agile. The 19" rear wheel and 18" front wheel make all the difference and give the bike sweet steering in traffic. The bars are swept low and wide, giving it a semi-sporty riding position. But personally I'd go a step further and either make them proper drop bars like the Thruxton, or lift them up a few millimetres and go flat-track style, Again, all that is possible and that's the beauty of the whole Dark Custom vibe. Buy a stripped-back bike and then make it your own, customise, indulge your passions and make the bike fit for your own personal shenanigans. 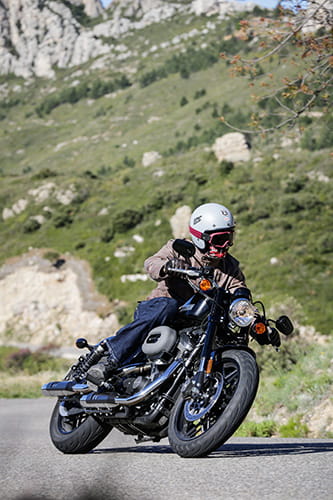 It's as easy to ride in town as any other Harley Sportster 1200. The lazy engine, making power as low as 2000rpm means it pulls cleanly low-down, it's responsive and ready to make it into a gap. the gearbox has a long and slightly clunky throw, but it's always positive and you always know the bike has shifted. The whole experience makes you feel good, digging the Harley vibe, chugging along using the torque of the motor, and taking in the view. It's one of those bikes that gets better and better, the more you ride it. Understand what makes this bike tick, it really is great fun. And it exudes cool too.

Head-on when the Roadster is coming at you it looks like a bike that someone has already taken and modified, in a good way. The whole Dark Custom vibe means a blacked-out motor, black paint everywhere, black forks, black heat guards on the exhaust, cut-down black mudguards and all-new cast spoke wheels where spoked exit on opposite sides. It's one of the purest, best-looking Harley Sportster's in its 60-year history, especially with its cut-down front and rear mudguards and the way the pillion seat gives it a fastback style.

In town it’s great, but It's out of town where the bike becomes alive.

At first I'm following some other journalists on the Low-Rider S and the extra punch of its 1801cc motor can't be kept in sight by the 1200cc Roadster. It’s no surprise, that thing is a monster. But the Roadster handles. It's got relatively quick steering, the Dunlop tyres help it hold a line and you can get a move on.

The pegs are in a slightly strange place when you go to put your feet down, but to ride, it's a nice position that pulls you over the front of the bike. Generally the riding position is good, the pegs are high but never uncomfortable, and the narrow tank and deep seat mean you sit well within the bike. I did around 120 miles on it and it wasn’t uncomfortable. 70mph is around 3000rpm where the bike is in its lazy sweet spot. Sure if you want to over take then just shift down, but for cruising, it’s spot-on.

The ABS is good too. Good enough to come howling into corners and grab a handful of brake and let it do its thing. The power is beautifully set-up, the throttle feel is ace and the flat torque curve means it's best in the power range between 3000 and 5000rpm. There's a redline and rev-limiter at 6000rpm, but why you'd ever want to get it revving that high beats me.

The bike is at its best riding smoothly, you can be more aggressive with the bike than any Harley for a very long time, that’s for sure. It gets a move on, and can tackle some of Europe’s most twisty and finest roads better than any sportster before it. On top of that, the more I rode the Roadster the more I grew to appreciate it.

Plus, remember this is just the start. It’s a hell of a cool bike for less than £10,000 and of course with the world of Harley and Dark Custom the rest of the custom world is ready for your own interpretation. 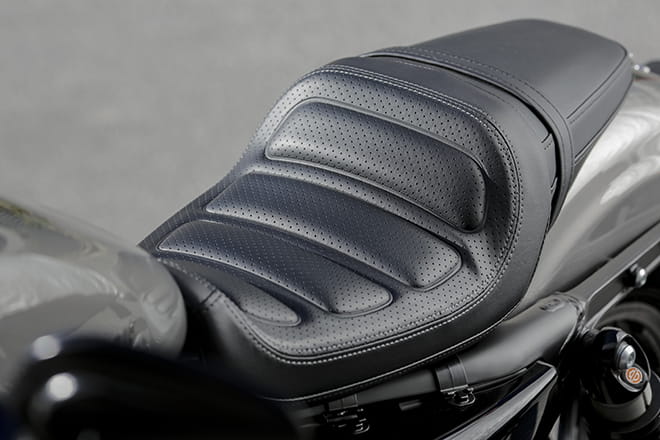 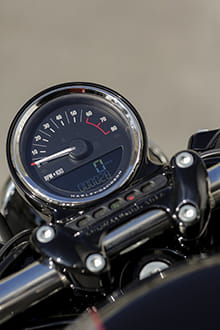 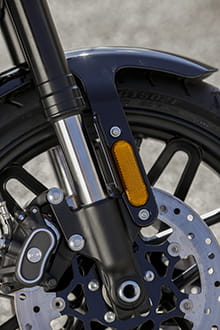 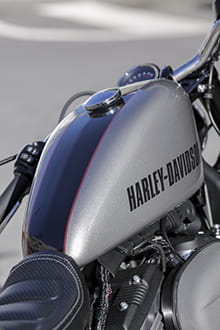