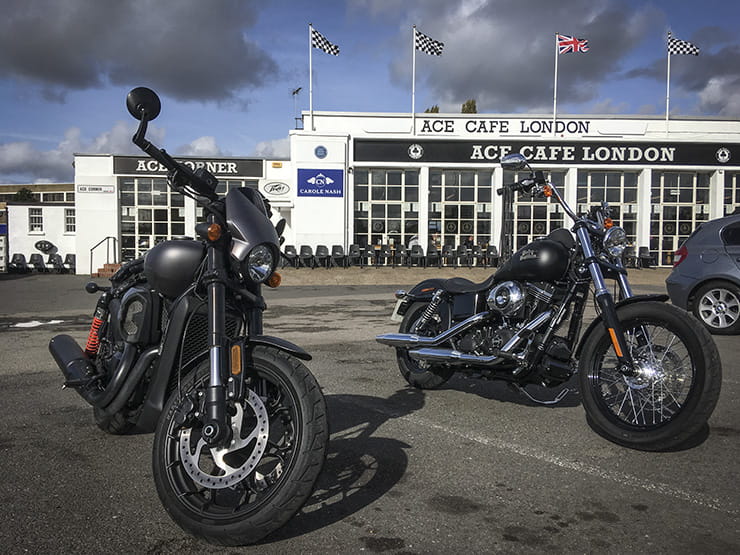 As I pulled up next to the Dyna Street Bob at London’s Ace Café, I started to wonder if the Street Rod I was riding deserved the Harley-Davidson badge. Here’s why…

Some might see most of that as positive comment. And they’d be right. But they’d also probably not be a Harley-stalwart. If you come to this expecting the full, traditional Harley experience you’ll be disappointed.

With a kerb weight of 238kg, this thing is no lightweight, and despite the very low 765mm seat, and overall squat nature of this bike, you feel every kilo of it. From the moment you drag it out of the garage, through rolling in and out of roundabouts, to carving through London congestion, there’s no escaping the fact that this thing weighs just 6kg less than a fully-fuelled BMW R1200GS. Combined with the high pegs that give the uncharacteristic lean capability of 37.3° on the right and 40.2° on the left (Harley’s Street 750 only manages 28.5° on either side), the Street Rod is rather ungainly in traffic.

You get used to it of course, but this isn’t a machine best suited to densely populated urban environments; the bar-mounted mirrors add that little bit too much width, while the choppy nature of the throttle when rolling on and off make it hard to ride smoothly. And if you’re stuck for too long in the heat, the engine really starts to warm the seat. 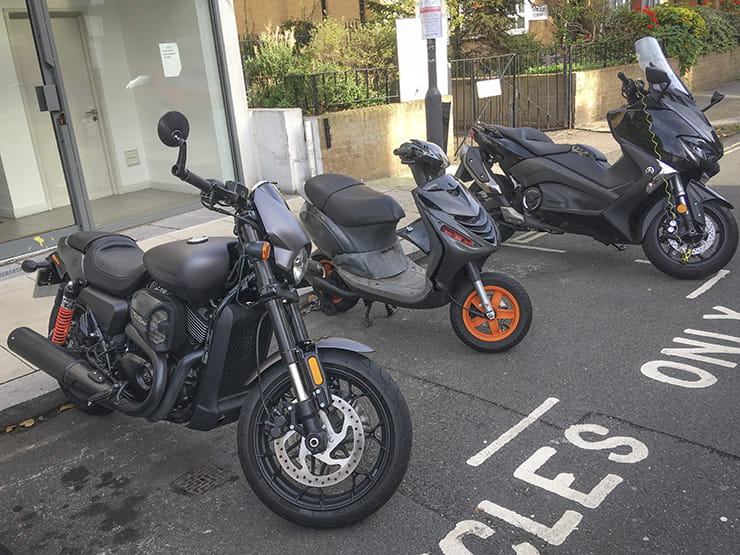 Getting into the city via motorway wasn’t as bad as I expected. It took about 70 miles before I was inside the M25, and while I felt a little cramped, and the riding position had that typical sail-like quality of a custom bike, the deep, soft seat made the ride almost comfortable.

But it’s let down by something so silly, I struggle to understand why Harley Davidson refuses to spend an extra 50p, or why its engineers seem surprised when I bring it up at a bike launch… The pegs don’t have return springs – they just flap about loosely, and can stay up if you knock them when climbing on.

On most Harleys that spend their life cruising at 55mph on Route 66, it’s not an issue, but on an H-D like this that’s willing to hustle, they wave around in the wind if you take your feet off. It’s annoying and uncomfortable when you adjust your foot position while riding at 70 to 80mph.

And avoid bumps. On the A1 I hit a lump that kicked me out of the seat – there’s little refinement to the suspension here, though I will say that it’s not as back-breaking as some other Harleys I’ve ridden.

Motorways are not what it’s built for though, so on the way home I took in some sweeping back roads. There it all made more sense – while potholes will still have you cursing, the superb ground clearance (by any custom bike standard) means you can keep up a good pace, while the willing engine sees plodding drivers dispatched with ease.

Wind it all back and there’s all of the enjoyment to be had knowing you’re cruising around on a Harley. And it’s reasonably economical too – on my 190mile ride I got 52mpg. The fuel light came on at 127miles, so the 13 litre tank isn’t bad.

At £6745, this is a well-priced entry into the Harley lifestyle. Details like the real-steel tail section add to the image, though I thought it was plastic until I took it off, so maybe that extra weight is wasted on me.

The £1005-cheaper-than-a-Triumph Street Cup price tag doesn’t buy you a tool kit though, or even a C-spanner to adjust the rear shocks. There’s no storage space under the easy-to-pull-off pillion seat, though while you’d need some ‘why didn’t they give me at least that’ tools to get at the battery, there is an SAE charging plug tucked behind the left cover (which simply pulls off).

There’s also an alarm and immobiliser as standard. The key doesn’t have a chip in it – a round fob automatically arms and disarms the bike. Most of the time. Despite fitting a new battery, it still sometimes failed to connect, leaving me swearing as it squawked away, frantically waving the fob around in an attempt to get it to talk to the bike. I don’t remember this being an issue when I was on the launch of this bike, so maybe we just have a rogue. 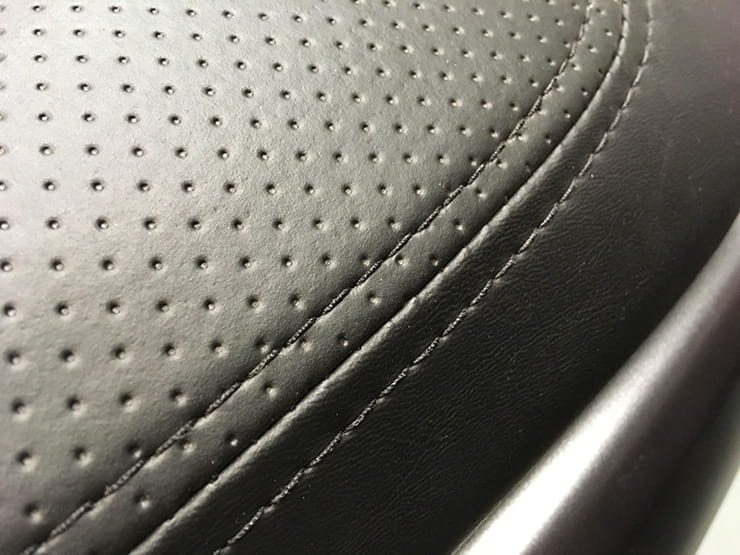 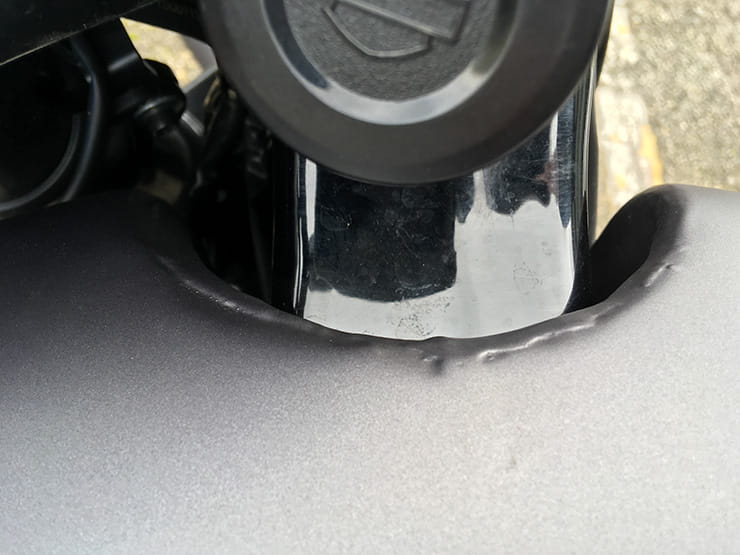 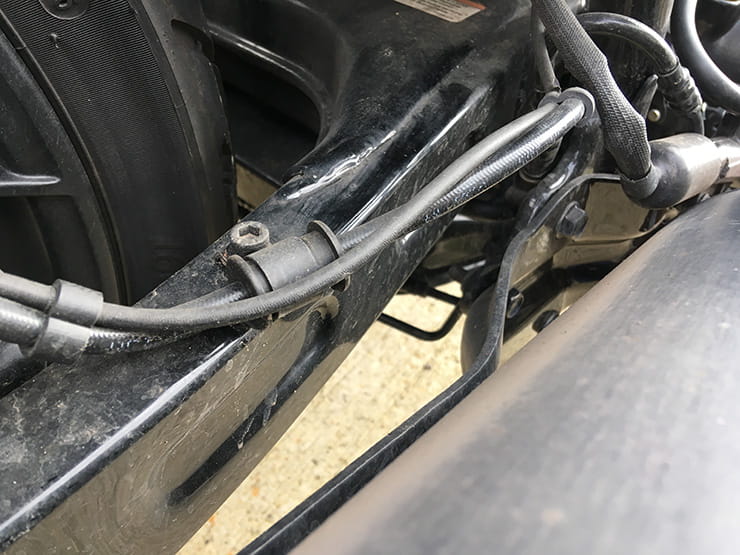 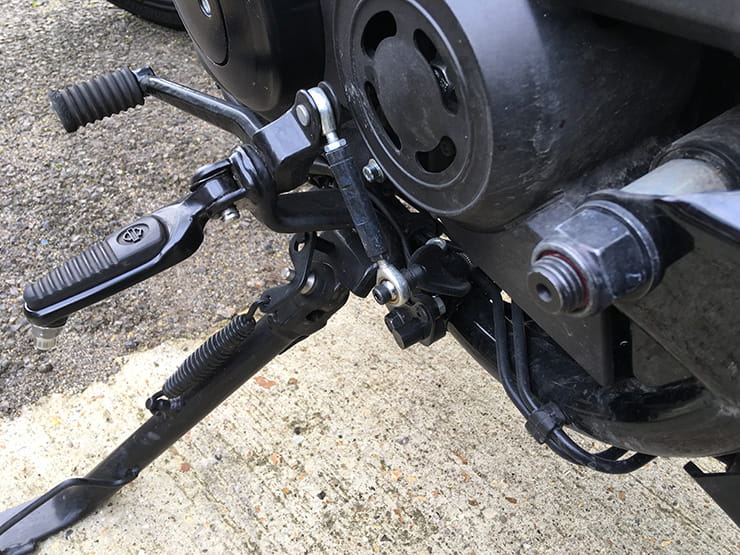 There are points on the Street Rod that show its relatively budget price tag, like the rough welding on the front of the tank, or the assortment of fasteners that never quite shout ‘quality’. I also find the big nut and exposed thread of the swingarm pivot a bit clunky looking, though to be fair, this is the back-to-basics engineering style that often typifies American muscle. And I do like the stitched detail of the seat.

There’s a lot to like about this bike, and there’ll be plenty of people who very rightly love its style, combined with what is an extremely capable engine and smooth gearbox (though I occasionally found it a little tricky to select neutral at a standstill).

Would I buy one?

No. That’s not from a Harley-hater – I love bikes of every type – but if I were to buy a custom machine (and one day I hope to), it’d be a Forty-Eight. Which is exactly the point – I’m not in the market that Harley is targeting with this bike, but in a Euro 4 world, where many people have long been demanding better performance from Harley-Davidson, and keeping in mind the need to appeal to a new and younger audience, it’s a promising evolution. Much of the Harley style and image remains in the Street Rod, though that does include some of the negatives too… Whether they bother you will depend on how you use your motorcycle, and I know there’ll be plenty of people out there who will love this machine. 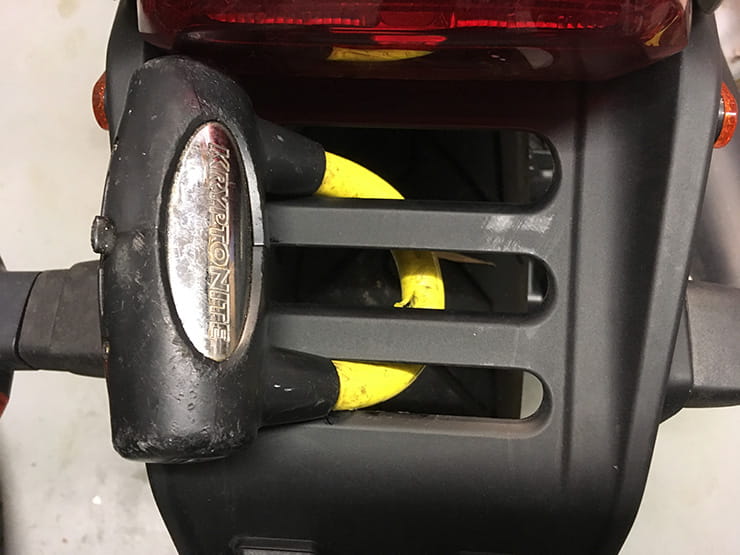 With not under-seat storage, carrying a lock can be tricky. Fortunately the slots in the tail are just right for a disc-lock!