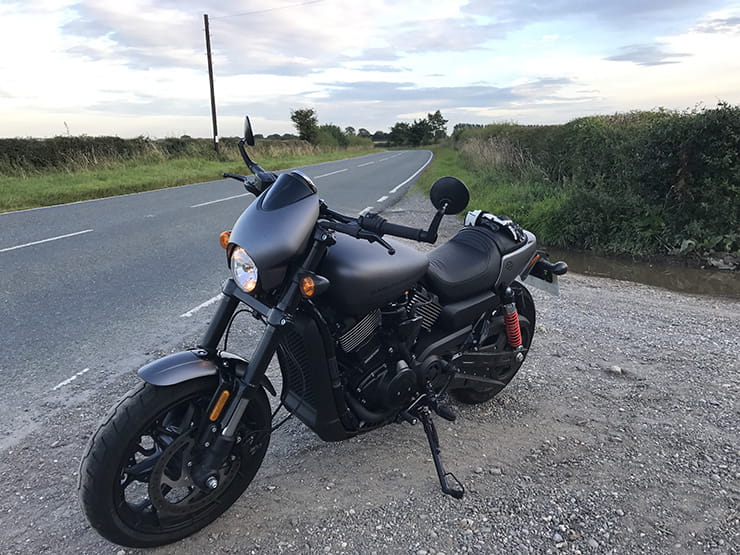 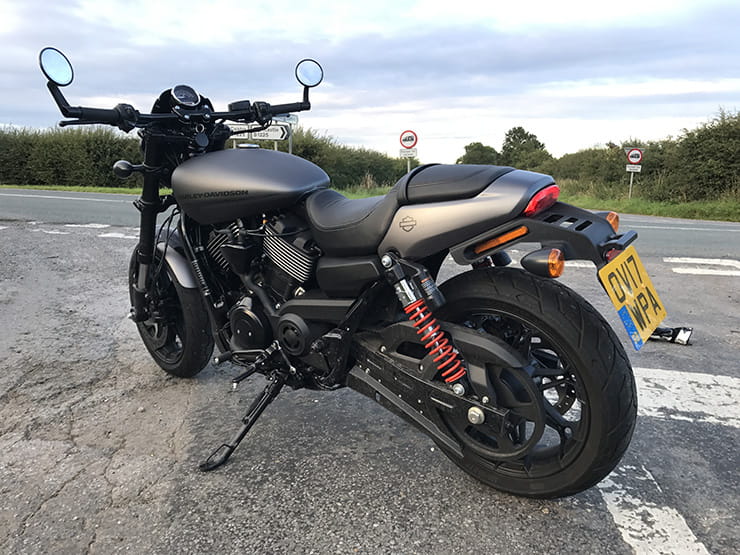 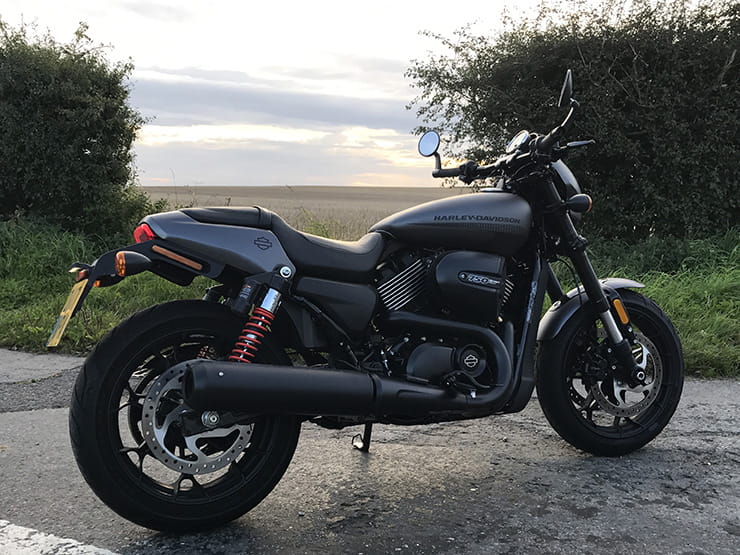 Horncastle, Lincolnshire; twinned with the 1970s. Think of that Simon Pegg film ‘Hot Fuzz’ and you’ve just about got it. But for bikey people Horncastle is brilliant because there are three of the most satisfying biking roads within a couple of miles of the town centre. Not scenic, definitely not Alpine – you’ll be lucky to get 500 feet above sea level round here – but taxing, usually quiet and addictive enough to have you looking on Rightmove (I did and five years on I’m still loving it). Oh, and one of the best chip shops you’ll ever come across.

One of them, the B1225 is also one of my favourite road test routes because its particular mix of bumps and turns and subtle challenges taxes the stability, steering, throttle response and suspension of pretty much anything.

Add that to the very different, but equally varied B1190 a couple of miles further south and it’s a wonder that Honda, Kawasaki Triumph et al don’t have a permanent test facility in the town centre.

I’ve just ridden the Street Rod up and down both and can’t imagine a bigger contrast to the press launch. That ride was on a stretch of Spanish tarmac so unfeasibly twisty that they might as well have bolted the bikes to a kiddie’s playground roundabout and strapped each journo to it for a couple of hours. This one was an hour or so of bumping, blasting and brawling, but mostly just giggling as the Street Rod and me work together to go faster than we ought to without risking everything. The suspension makes me chuckle. It works, as in it does soak up bumps and hold the bike on line. But where other bikes do this with subtlety and compassion, the Street Rod’s dampers appear to offer every single bump outside for a punch-up, like an aggressive short bloke at closing time. I have no evidence for this but I’m willing to put money on it that Harley’s engineers just don’t ride Hondas ever. If they did, that combination of damping, control and ride quality almost all Hondas have, regardless of price would blow their minds Until then they will always make bikes with that ‘Special HD damping’ and the softest springs they can find and let the rider learn how to make them handle. 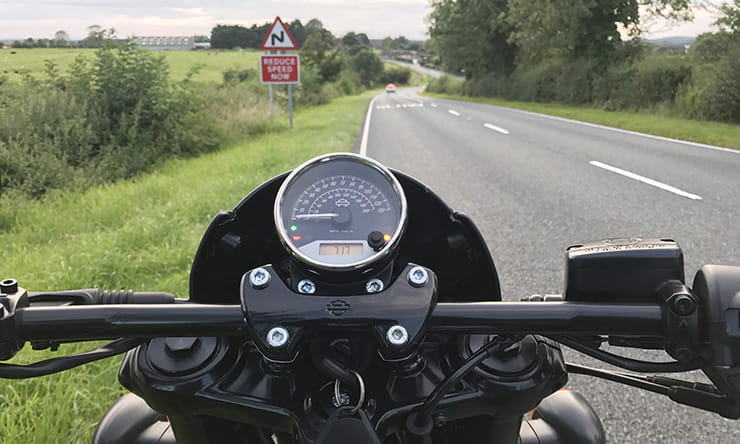 After a few weeks riding Honda NC750s, X-ADVs and my long term BMW R1200RS, the Street Rod feels like a bike with a ‘good value’ price tag. The v-twin engine feels strong, but rough, like a Suzuki SV650 needing a minor service. Ride it by feel, changing up where you feel the torque start to drop off and it feels happiest somewhere around 75mph. The gearbox needs a positive toe up and down, but always goes in unless you are looking for neutral, in which case it’s one-in-eight.

Like all cruiser-type bikes cornering works best when you brake early, release the brakes early and give the soft suspension time to settle before turning in. The Street Rod also steers a lot more easily when you get on the throttle early. Do this and the it handles surprisingly well for a mid-price cruise-dster.

We stop at the Willingham Woods bike meet and it’s interesting to see how much attention and positive comment the Street Rod gets. This is the first time I’ve been there on a Harley and not been the brunt of a load of clichéd twaddle. 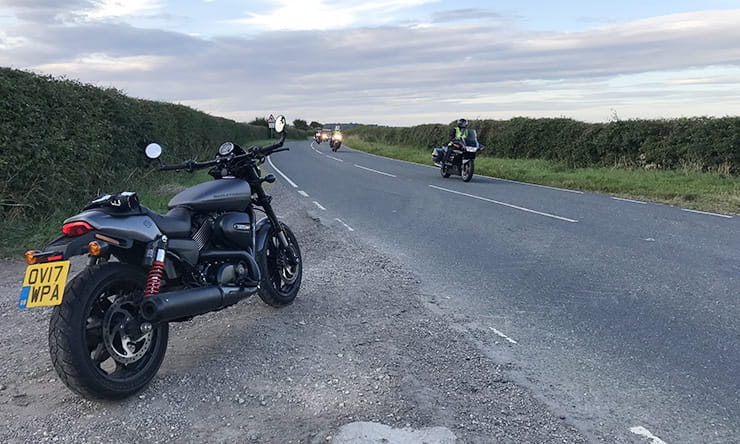 By the time I get home I’m enjoying the Harley enough to forget about the ridiculous riding position, ignore the ‘getting less precise’ gearchange and be almost willing to forgive the built-in alarm beeping and chirruping every time I stop.

The following day I break the unbreakable rule of custom bike riding and ride the Street Rod somewhere that I need to be by a certain time. Which means expecting it to behave like a normal bike, which in the Street Rod’s case means expecting it to be comfy enough to do 100 miles in one hit.  The riding position is weird; feet are positioned wide (and the right foot is out wider than the left one), knees are higher than thighs, while arms stretch out and down to wide, low bars. It feels very odd at first – possibly the least comfortable bike I have ever ridden – but like with sports bikes, eventually the right muscles stretch and the awkwardness disappears. We did the journey in a similar time to many supposedly faster bikes and still saw a respectable 57mpg as well.

If you’re thinking of buying one make sure you get a long enough test ride to get used to the quirks, because, long term I think they are worth the effort. There’s nothing else like it and, for this money, for a bike with that badge on it, you’ll be happy with what you bought.