All American Cruise Off: Harley-Davidson Forty-Eight vs Indian Scout 60 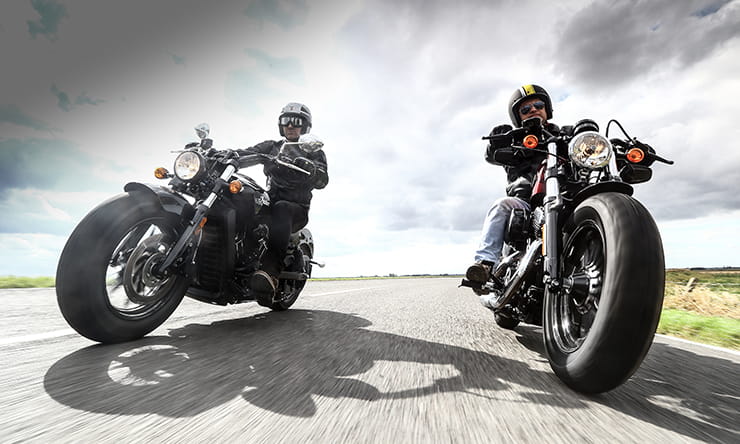 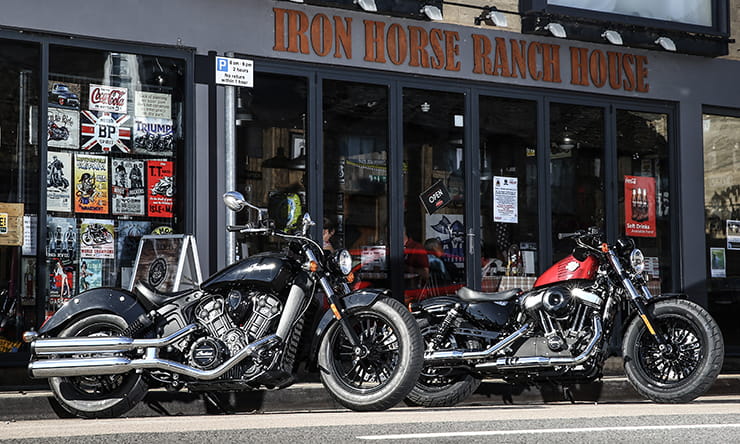 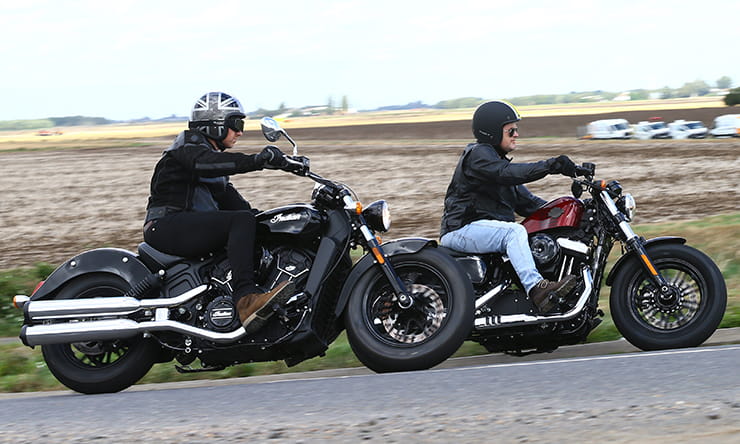 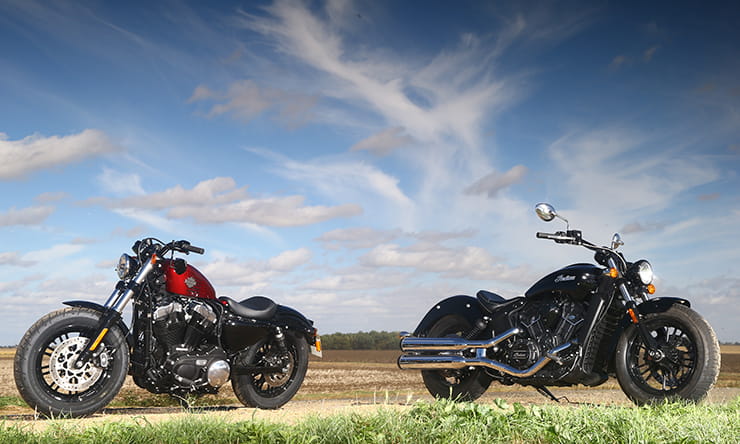 In the world of cruisers, authenticity is everything.

Derided by some as slow and overweight, it’s a genre that’s all about the look and the vibe. For many, it’s also the name on the tank and the fraternity of pack riding. For sportsbike riders it can be a difficult concept to buy into, but get your head around it and on the right day, on the right road, there are few purer motorcycling experiences.

The cruiser concept is one of the most relaxing and accessible in the whole of motorcycling. The bikes are low in height and low in power. They’re easy to ride and have the look of a traditional motorcycle that’s just ridden out of a Hollywood set. Man or woman, short or tall, rookie or veteran, the cruiser offers something for everyone.

To understand cruising, you have to understand where it comes from. It’s the most American of concepts. The States are vast and the highways long and straight, with 55mph limits policed by bored small town cops. That was the Fifties, in the heyday of Route 66, but such was the impact of American culture from that era that the dream remains alive today.

Today’s bikes may have moved on significantly in terms of performance, reliability and emissions, but the concept of the cruiser remains as pure as ever. It’s a stripped down iron horse with feet forward comfort and a minimum of gadgets.

And, as we’re talking authenticity, it’d better be from a historical American brand. Which brings us to these two. Other cruisers are available, but if you want American, Harley-Davidson screams USA like the Stars and Stripes, Uncle Sam and Grandma’s Apple Pie.

The Sportster range has been a staple in Harley’s range since 1957 and is the very essence of the concept. They are low and easy to ride and, as the entry level model in the range, are affordable to a wide number of riders. The Sportster range starts at £7795 for the 883cc Iron, but for this test we’ve gone with the £9845 Forty-Eight named because, erm, the shape of its fuel tank first appeared in 1948.

Against it, we’ve got Indian’s Scout Sixty, named because the engine is, er, 61cubic inches in capacity. It is the cheapest model in the reborn Indian range and retails at £8999. If you’ve never heard of Indian before then that’s ok. It’s a brand that lay dormant for most of the last century, but the original company was founded in 1901 (two years before William Harley and Arthur Davidson started experimenting with their first motorised bicycle design) and was, for a period, the world’s biggest motorcycle manufacturer.

Now part of the giant Polaris Industries group and manufactured in North Carolina, the reborn brand has been on sale for three years now. What we have here are two very authentic £10k cruisers with the right name on the tank and plenty in common, at least on paper...

Both bikes have that classic stripped down sportster look with solo seats, twin pipes and fat tyres (130/90 front and 150/80 rear) adorning cast 16” wheels. There’s a single disc up front, five-speed gearboxes and a traditionally styled single speedometer with neat little LCD insets in them. There, review done!

You see, there’s not an awful lot of tech to these two bikes. They are the very essence of that aforementioned iron horse. They may not be everyone’s swig of bourbon, but it’s easy to see the simple attraction.

Harleys often get a bad rap. Critics will slag them off as slow and outdated barges, that neither handle, stop or go very fast. And while that’s true in pure sportsbike terms, those keyboard warriors are just missing the point. Harleys are about spirit, feeling, heritage and attitude.

While it is true that the tech is very traditional, it’s like that for a reason – because that’s what the customer expects. The engineering is solid. It’s well built and definitely more refined than Harleys of old. There’s none of that teeth chattering vibrations that afflicted Harleys as recently as 10 years ago. Modern tech makes an appearance where necessary. Fuel injection keeps the emissions within the latest Euro 4 regulations, and there’s ABS too.

The Indian almost slips in under the radar. The resurrected company is owned by Polaris, the owners of Victory, although surprisingly the Indian is not a rebadged Victory. Ground up, it’s a completely different motorcycle. And a good one at that…

These two are both V-twins, ‘natch, but how the Harley and the Indian go about their business is very different indeed.

As a newcomer to the scene (Polaris era Indians only went on sale in late 2013) the Scout Sixty features a thoroughly modern liquid-cooled 60-degree 999cc motor with such fripperies as two cams and four valves per head.

The Harley has half as many valves and doesn’t even have camshafts in its cylinder head. The air-cooled ‘Evolution’ pushrod motor can trace its roots back to the days when Jesus was a wee laddie and it’s as traditional as you can make an engine under today’s Euro 4 regulations. Interestingly neither manufacturer releases power figures in the UK, but we do know that there are 66 horses in the Harley stable, to over 80 in the 999cc Indian. Torque is really what these engines are all about though, with the Harley delivering a stonking 96Nm, to the Indian’s 88Nm.

On the road, both bikes feel true to their spec sheets. The Indian is faster, smoother and more familiar in feel to non-cruiser riders, but compared to the Forty-Eight it feels a bit bland and lacking in character.

Character is a word often used as a synonym for old fashioned or not very good, but in this case it’s no backhanded complement. The great thing about riding both these bikes, but particularly the Harley, is that there’s a real connection between you and the engine. Turn the throttle and it chugs forward, back off and the engine brakes. The gear change is positive, if a little heavy and the clutch light and easy to operate. 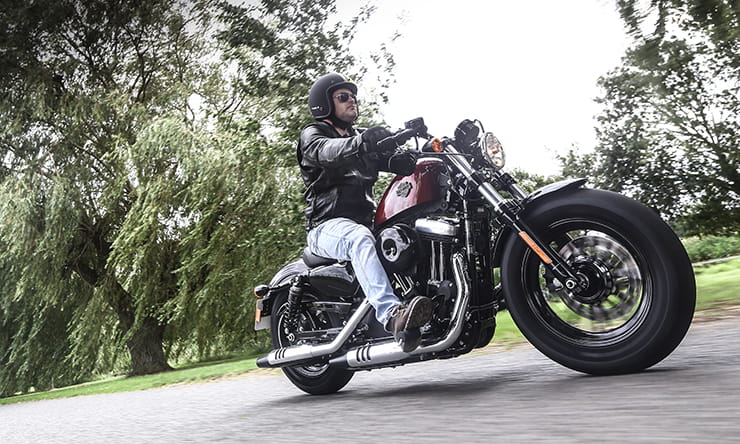 Let’s be clear, neither of these bikes are ideal for touring on. There’s no real luggage provision but comfort isn’t too bad, up to around 70mph that is. It’s the stripped back nature that means neither is particularly practical. That top speed limit is a result of the lack of wind protection and wide bars that turn the rider into a sail. If that bothers you, then you’re probably looking at the wrong type of bike. The clue is in the name, cruiser, and where they are at their best is lolloping along at 55-65mph, hardly surprising given the draconian speed limits in their homeland.

I found the solo seats pretty comfortable, especially on the Indian, and my butt durability certainly outlasted the fuel range. Both are traditional feet forward designs, which I personally find comfortable, although the Harley's big pancake air filter housing sits just where I don't want it to be, right by my right knee. While we're on the 'things-I-don't-like-about-the-Harley' rant, I wasn't overly keen on the visibility from the underslung mirrors (although they do look ace) and the indicators won't be to everyone's taste. As a long-time BMW owner, I like the idea of a button for right and another for left, although I'm not so keen on the way that they are self-cancelling.

The Indian was doing about 45mpg in my time with it but, with 11 litres from full to light, I found myself looking for a fuel station every 100 miles. It must be said, though, that my colleague Michael was pretty critical of comfort on both, which goes to show how different bikes fit different bodies in different ways.

While the Scout’s 12.5 litre tank is pretty small, the Forty-Eight carries just 7.9 litres of unleaded. It’s style over substance, that’s for sure, but that tiny little peanut tank is the Forty-Eight’s signature piece. After all, the name ‘Forty-Eight’ pays homage to the 1948 Sportsters, which were famous for introducing the tank design to the V-Twins. I found myself getting 70 between stops, although you can’t really berate the Forty-Eight for lack of range. If long runs are more your thing, the larger tanked (and dual seated) Sportster 1200 Custom will hold more than twice as much fuel as the Forty-Eight, and costs just £100 more.

Handling isn’t really a strong point of either of these bikes, but get into the right mindset and they can be fun to ride. With those big balloon tyres, neither is going to be particularly agile. Ride them hard and they can raise a few eyebrows, but that's not really the point. These are bikes best enjoyed at a leisurely pace.

The Indian does feel heavy to steer and has a ginormous turning circle. It doesn’t cope well with imperfections on the road but at least there is more ground clearance than on the Sportster, although the lack of hero blobs means that when metal does touch down, it’ll be the sound of expensive pegs rather than sacrificial screws grinding away.

The Harley, although feeling heavier at standstill (Harley claim 252kg ready to ride) feels more agile on the go. It’s much more manoeuvrable at low speed and I preferred the brakes too. The Scout's front brake is effective enough but felt a little spongy. Neither has the most sophisticated ABS system you'll ever experience, but both are adequate enough.

These two are the motorcycling equivalent of Donald Trump. Love them or hate them, there’s no doubt you’ll have an opinion on the Harley-Davidson Forty-Eight and Indian Scout Sixty. These bikes polarise riders and writing a conclusion to this review is surprisingly one of the toughest things I’ve ever had to do.

This one really did keep me up at night. In many ways they are so similar but in others they offer something so completely different.

Based on the riding experience alone, it’s hard to look past the Indian. The chassis is more composed and the engine much smoother and peppier, hardly surprising considering it’s a much more modern design. And it’s cheaper too.

But I really, really enjoyed riding the Harley. It's got bags of character, looks great and has a vibe all of it’s own. It is (whisper it) my favourite of the two, but it's also a bit of a guilty pleasure, if I'm being honest.

A deciding factor for many a rider will be not just be that image, but all the other things that come with Harley ownership. You see, Harley-Davidson® is a club and if you buy in to that, boy can you buy into that. If what you want is fraternity and meeting up with like minded 'bikers' then nothing can touch H-D. They run amazing events and as much of the pleasure comes from just owning a Harley and being part of the family, as it does actually riding it. If that's your thing, buy the Forty-Eight - you'll love it.

But I'm a grumpy old stick in the mud who likes to do his own thing. Groucho Marx famously said that he didn’t want to be part of any club that would accept him as a member, and that sums up why I probably wouldn't go for the Forty-Eight. I loved riding this bike around town but buying a Harley just makes more of a statement than I want to. I just like to ride.

The Indian has the heritage but is a more understated option. It’s cheaper, and in many ways better, and when you park it up you’ll still draw a crowd. And when that crowd asks you about your Harley (as they will inevitably think it is) you can tell them that you did the rebellious thing and bought the Indian. 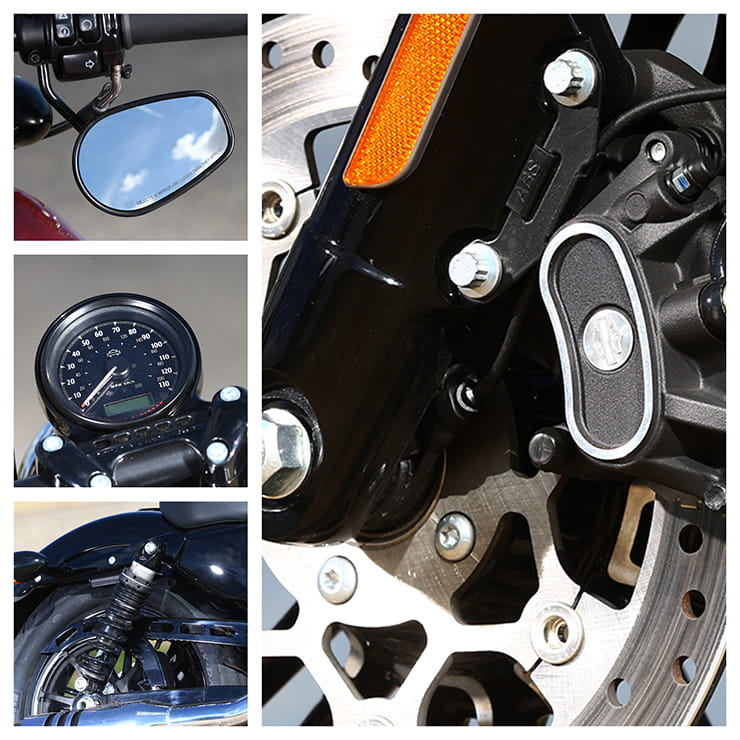 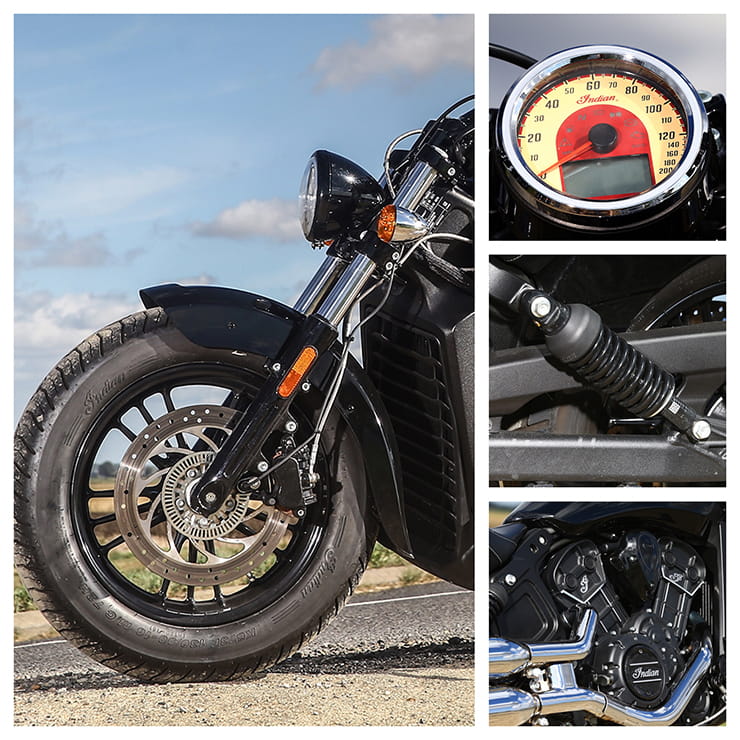