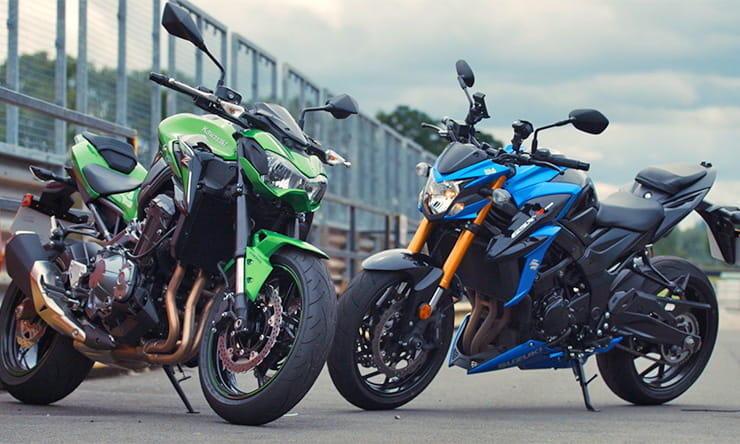 “Which bike should I buy?” It’s probably one of the most common questions asked in motorcycling, and while we could argue that it’s never that simple, two bikes seem to be firing debate more than most…

Suzuki’s GSX-S750 and Kawasaki’s Z900 are quite different machines. While the two Japanese companies would be unlikely to put them both in the same pigeon-hole, that’s what we bikers like to do, and rarely more so than with these two. The blue ‘Apex Predator’ and the green ‘Refined Raw’, as the marketing teams describe them, have little more than a lack of fairing and an inline-four motor in common, but their similar prices and styling make them direct competitors in the dealerships.

We sent two journalists out on both bikes, and ended up with two opinions, which probably isn’t what you wanted to hear, but bear with us…

Surely, the GSX-S750 is all the naked sports bike you’d ever need. I’ve not got the self-control for a bike that propels me to 100mph plus before I notice things are getting exciting, so I appreciate a motor that actually needs to be worked. An engine that feels – and sounds – like you’re wringing its neck… that you don’t just leave in third to do its thing.

Don’t get me wrong; the Suzuki’s 749cc lump isn’t slow. And being based on the 2005 K5 motor (which was the same as the 2004 K4, so is 13 years old) doesn’t make it lack-lustre. It’s got one of the smoothest fuel-maps I’ve ridden since Euro 4 tried to spoil our fun, and it sounds amazing. Not amazing-for-a-modern-bike amazing either – this sounds just like I remember a GSX-R750 sounded back in the day; the air-box howl is utterly intoxicating, and bystanders say that this Suzuki sounds better than most (including the Kawasaki that Si is about to try to convince you to buy).

It’s a shame then that the exhaust’s look doesn’t compliment the sound – sharp edges and cheap welding shout “budget”, as does the non-span-adjustable cable-operated clutch, steel swing-arm and exposed coolant pipes. But while Simon will no doubt try to tell you that the green machine he loves looks better than this, I’d argue that styling is subjective. And he’s wrong. Though I will concede that when walking up to the two bikes, the Kawasaki looks to have the more premium finish.

Sit on it though, and the Suzuki’s full featured dash offsets the slightly bland top yoke and clumsy steering lock, while the bar-mounted controls give an extra touch of convenience that the Zed’s lacking. I even like the seemingly pointless ‘one-touch start’ – standing next to the bike as I put my gloves on, a quick tap of the button will turn the engine over until it fires. It’s only a second at most, but you miss it when it’s not there.

The large under-seat storage is much appreciated, and swallows a disc-lock, bottle of water and some chocolate bars with ease, but it’s a shame there aren’t rear luggage hooks – along with the shallow tail unit, I couldn’t find a way to fit my panniers. A Kreiga tail pack fits of course, but that’s only an option without a pillion.

On the road, the suspension, which is adjustable for preload only, works well. Most of the time. On smooth roads it’s an absolute joy, but every so often I’ll come across some rippled Tarmac that makes the bike feel choppy, particularly at the rear. It’s not a disaster, and I prefer it to the more plush feel of the Kawasaki – this is a sports machine after all – but I can’t help thinking that a higher quality shock could make a difference.

On track the choppiness isn’t an issue, but surprisingly, the Suzuki doesn’t feel the most planted when lent over – it’s not unstable, but the front picks up every feature of the surface, giving the impression of a stiff front end that doesn’t have the chassis flex to make match the latest track tools. I still enjoyed it though, and whole on paper the Suzuki is heavier, I much prefer its geometry, which makes the Kawasaki feel almost cruiser-like when jumping between the two.

The brakes are fine – the radial calipers look much better than the Zed’s, but with both fed by rubber lines, they feel pretty similar – strong, with no aggressive bite; competent, if not outstanding. Oh, and there’s traction control – three levels and off, all of which (unusually) can be selected while you’re riding. I’d rather see a blinking light than a hedge when I find the limits, so I’m a fan of the electronic safety-net.

And I’m sure that’s how Si will want to describe the Suzuki overall, but to do so would be to ignore the light handling, incredible sound, and marvellous, real-world engine. As a more comfortable sports-bike that isn’t stretching your ability to hang onto your licence, it doesn’t get much better than the GSX-S750. 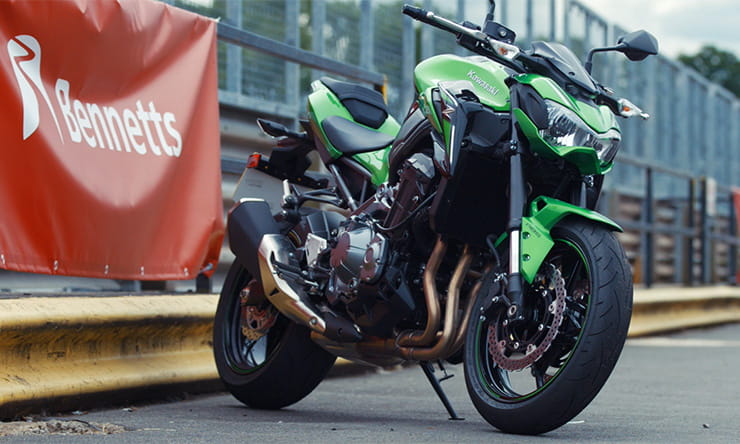 But it is a bit better.

Which is a surprise. I was lucky enough to ride both bikes two weeks apart at their Spanish launches earlier this year; the Suzuki in torrential rain and the Kawasaki in broad sun. And with, ahem, ‘spirited’ riding on both, I was convinced the GSX-S was lighter, sharper steering, more agile, better balanced and better equipped for sporty riding. And was on good tyres. Meanwhile, the Z900 was more powerful but softer, less sophisticated, less sporty and more cumbersome. And on awful tyres. Put the pair back-to-back on a twisty A or B road in the UK and, I concluded, the Suzuki would be more fun and would clear off.

I was broadly right – except it’s the Kawasaki that’s more fun, more fulfilling, faster and generally more pleasant to ride on the road. Here’s why:

The Z900 is a fresh, new, bespoke motorcycle designed and built over the last four years to be a Z900 and a Z900 only – not the top layer of a decade’s wallpaper, to be peeled back revealing older layers of previous versions underneath. It’s unrelated to the out-going Z800, and connected only to the existing Z1000 by the engine’s stroke measurement and crankcases – everything else: motor internals, H2R-informed steel tube frame, uprated KYB suspension, brakes and styling, is new. And, importantly, the Z900 is designed to be Euro 4 compliant from the start. There are no sticky plaster remedies and ‘that’ll do’ details.

So with a favourable bore/stroke ratio for fat, midrange-rich road-based tuning, the Z900 has a perfectly-fuelled, blissfully smooth engine with a typical Kawasaki quality of seemingly endless, almost elastic, power – open the lightweight throttle and it pours out the stuff like tipping over a bucket of cream. It won’t howl noisily like the GSX-S, but it’s not as harsh, vibey or plain angry as the Suzuki feels when you crack it on. And it’s significantly faster – following John as he booted the GSX-S in a straight line, and I was rolling it off on the Kawasaki to stay behind him. The Suzuki may be hectically rapid, but the Z900 is colossally fast. 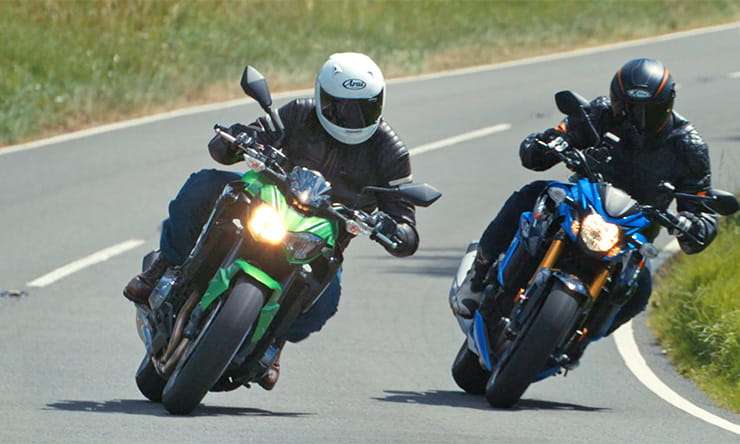 The Z’s KYB suspension is a lovely road-based compromise – it’s plush, supple and gently supportive of the Kawasaki’s weight. What it lacks in immediate feedback in terms of handling acumen, the Z900 makes up for with a comfortable ride, gliding over corrugations and surface changes without a care. And even when the pace picks up, the Kawasaki’s mass is reassuringly steady – the bars don’t wander about, steering is placidly neutral and the back end follows the front’s lead like a faithful Labrador.

The Kawasaki is meant to be an entry-level hyper-naked, one step up from A2 licence compliance but one removed from the full-on flagship rocketships, which is why the Z900 has a much less aggressive and engaging riding position than the front-endy, attack-minded GSX-S. Seat height is lowest in the class, sitting the rider low behind the tank and steering lazily from the hips with a dynamic more akin to a sports tourer than a sportsbike. It’s a more relaxing way to travel.

What isn’t relaxing – and where the Suzuki really does score a big bag of points – is the Z900’s lack of traction control. It’s a major oversight and for the little extra it would’ve cost Kawasaki to add at least a rudimentary system, they’ll surely lose in sales to other manufacturers – more so when they see fit to sell the bike on fairly awful Dunlop 214s as opposed to the GSX-S’ Bridgestone S21s. On the other hand, you can pull monster wheelies on the Kawasaki without having to fiddle about looking for the ‘off’ switch.

The other area the Kawasaki isn’t as strong as the Suzuki is the thing you spend most time looking at (apart from the road) when you’re on the bike – the clocks. The Z900’s small, single dial with naff LCD tacho needle is, frankly, rubbish. When you’re spending over £8000 on a new bike you’d expect something a bit more sophisticated than a 1980s Casio watch.

But finally, the Z900 also looks better than the Suzuki – yes, it’s over-styled and fussy, but the detailing is nice and at least it has presence. The Suzuki is so bland you could trip over it and still not notice it’s there.

Which is why, when I open my garage door, I’d be happier to see a Z900 parked in there than a GSX-S750. And why I’d rather be riding one to work every day, on sunny Sunday blasts, and even over long distance on holiday.

For two bikes aiming at roughly the same customer, the Suzuki GSX-S750 and Kawasaki Z900 are very different riding experiences. The Suzuki is aimed at the sportier, perhaps more experienced, rider – someone who’s used to the blood and thunder of fast riding and expects direct chassis feedback and a howling motor that wears its heart on its sleeve. It’s not intimidating, but it delivers its performance with more than a hint of aggression and at the expense of ride quality.

The Kawasaki has a softer, more gentle, rounded riding dynamic and is better suited to less experienced riders. It’s by no means slow – in fact it’s faster than the GSX-S – but it goes about the journey with a casual insouciance; less frantic, less insistent, as if saying “Yeah, fast, whatever...”

And as to the outright winner; which kind of rider are you? 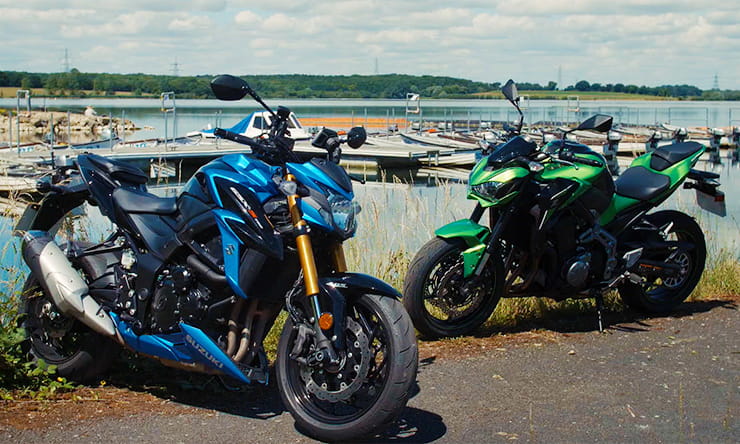