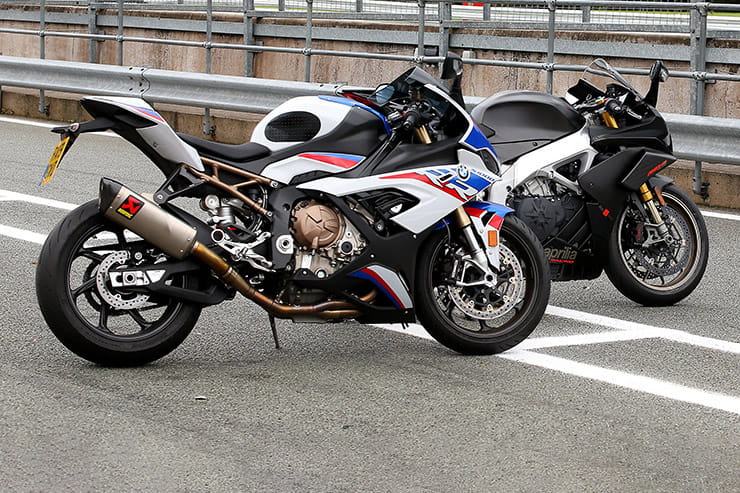 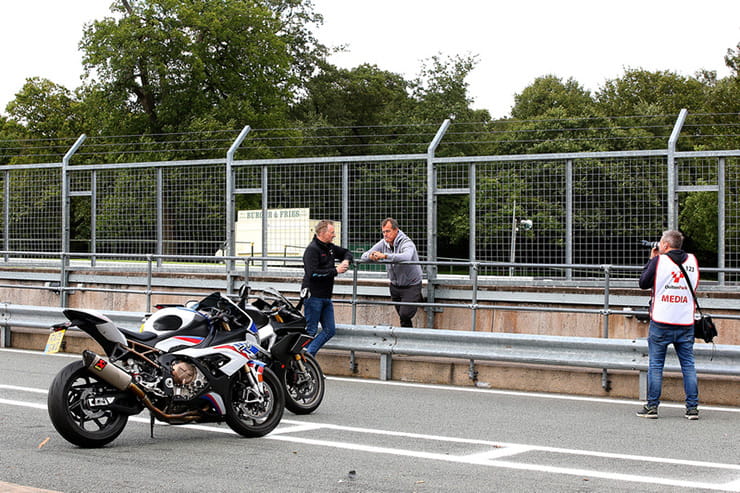 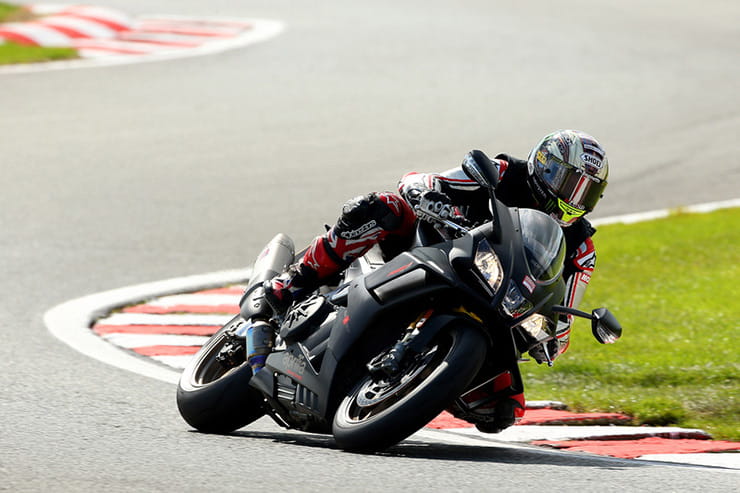 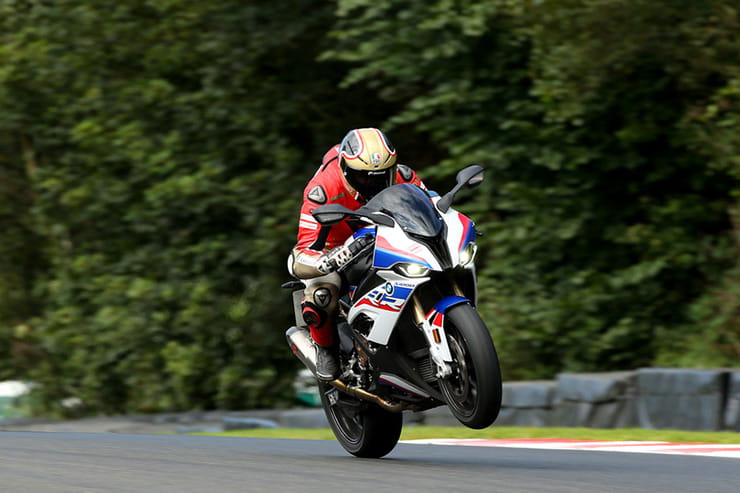 As standard, there’s £1800 difference but this particular BMW is our long-termer and has a few additional extras; namely the black screen, an alarm, a set of StompGrips plus a full Akrapovic exhaust system making this bike’s retail value £21,770 – just £271 more than the Aprilia. The system also gives the BMW an extra 9.5Nm and 11bhp in the mid-range while reducing weight down to 188kg, versus the RSV4’s 199kg.

With almost 420bhp on offer plus power-to-weight ratios that are almost identical, there’s plenty here to scramble my brain… so, it’s a good job I’ve got a special guest to help, and he’s used to harnessing massive power and warp speeds. It’s 23-time Isle of Man TT winner, John McGuinness.

At the Bennetts Customer Track Day held at Oulton Park, John and I dodged the rain and swapped bikes during the course of the day, playing with the masses of electronic options and getting familiar with the swoops, crests, cambers and undulations of this 2.7-mile piece of twisting, challenging yet wholly rewarding circuit set in the Cheshire countryside.

Ahead of any riding, McGuinness said, “I’m super excited, we’re at one of the best tracks in the country where we can stretch their legs a little bit with some blind crests, some uphill bits and fast bits – a bit like the TT track.

“I don’t know what to expect really. I’ve been a long time with other manufacturers but I want to know what all the fuss is about with the new BMW because I’ve spent plenty of time staring at the seat cowl of one of them bikes for a while over the last couple of years! And the Aprilia; well, it’ll probably be aggressive and it looks quite small, like a little 250. I’m excited to get out on track and giving them a spin.” 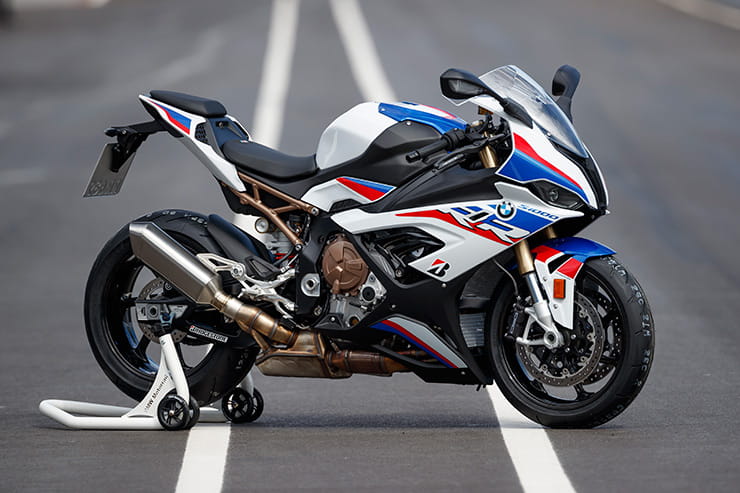 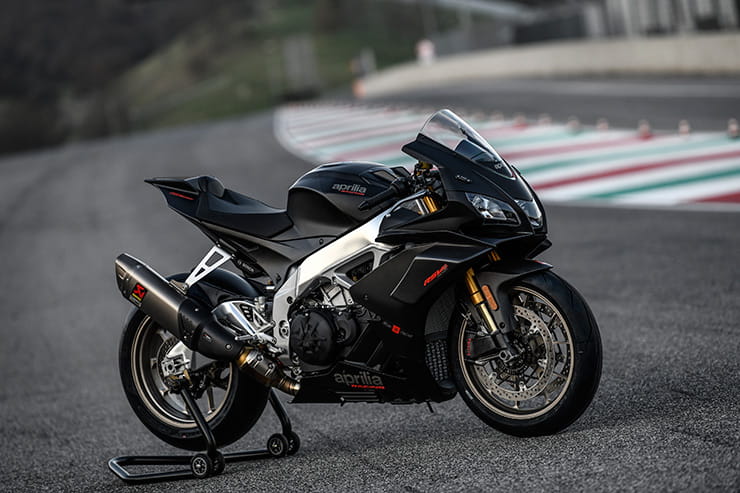 MM: Well, we’ve got away with it with the weather and what a day we’ve had with these two superweapons…

JM: Like you said, I’m grateful to be here and riding around, It’s been a long time since I’ve done as many laps as this around a short circuit. I’ve been in and out in all the sessions to get as many laps in but two fantastic bikes, two very different bikes - this is new generation for me – I’ve sort of grown up on throttle cables and blipping things myself. It’s only recently, over the last year or so, where I’ve used that new technology and I’m getting to like it more and more and more. Picking a winner is very difficult, I don’t really know!

I’m biased towards racing all the time and I’m thinking to myself if I was going 185mph down Bray Hill now which motorbike would I want to be on and I’m steering towards the BMW all day but one’s a V4, one’s really aggressive, one’s really short, one steers maybe a little bit better. With the Aprilia it’s grunty, it sounds awesome, it’s throaty, on the downshifts with the autoblipper it sounds more racy where the BMW is very neutral. Seating position on the BMW, going back to my job of racing it for an hour and 45 minutes, I’d want to be on the BMW but if I want my skirt blowing-up for 15 minutes, I think I’d be on the Aprilia. I’d love everybody to have a go on it to see how powerful it is.

Over the last few years I’ve been with Honda for a long time and now with Norton so I’ve not really ridden these (type of) bikes so I’ve ticked a lot of boxes for me today and I’ve learnt a lot as well.

MM: So, what are your highlights with the Aprilia specifically?

JM: I would say power. It just feels like it’s got a lot of power. It seems to have got some sort of nerve centre in it, like its alive, like an animal really! It does react to the changes as well with anti-wheelie and traction control – really tamed it down which is what you want. If you run it off it wheelies, it’s on the back wheel, it’s a bit flighty, it’s a bit nervous. When you’re on the brakes it dives forwards and it turns in initially a bit better than the BMW.

The BMW feels a bit safe. It doesn’t feel like you’re going that fast but if you had a stopwatch on, the lap times would definitely be there against the Aprilia, probably doing it a little bit easier.

Both are incredible bikes and I wouldn’t want to slag either of them off because they’re both fantastic and if you had your X amount of money in your pocket it’s down to personal preference. 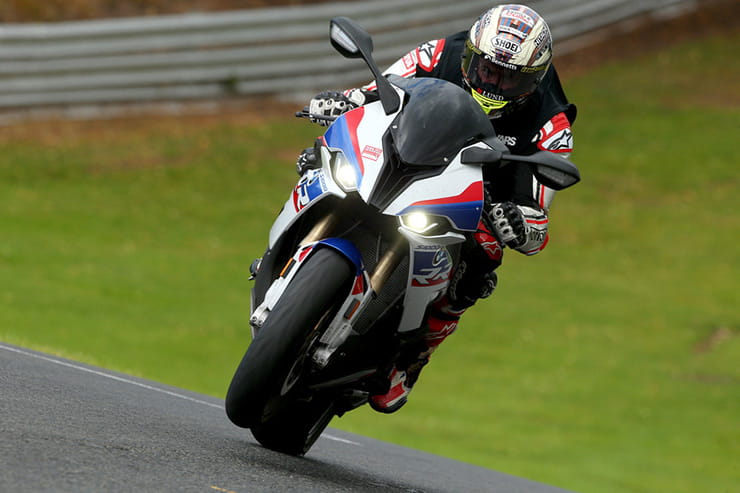 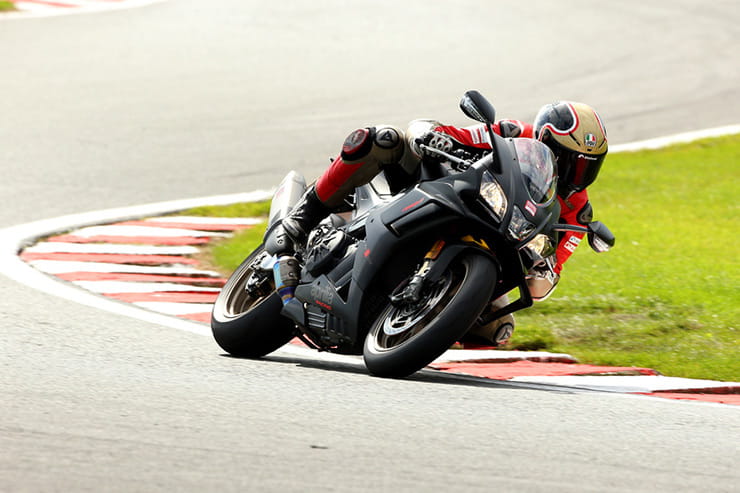 MM: We could easily stand here and justify one over the other either way but if you did have £21.5k and you had to take one home, and I’m talking about road riding too, because that would be their primary focus…

JM: I wish I had all the money, I could then buy all the motorbikes. I’m a motorbike fan, I’ve got 53 motorbikes in my bike collection, all sorts of things from two-stroked to everything so if I had enough dosh I’d be in both shops wheeling both of them out but if I had to choose then probably the BMW. It’s been a bit of a thorn in my side for the last few years, I’ve been looking at the seat pod of them for long enough now so it’s been a little frustrating over the years. This is the first time I’ve ridden one, I can see what the fuss is about. You could go down the motorway on that BMW, it’s quite comfortable. If you put a higher screen, more of a racy screen… everything you ride nowadays has got a tiny little screen, you feel like you’re getting your head blown off your shoulders. It’s comfy, it’s where I’d put my handlebars if I were going to race it. On the Aprilia, the distance from the seat to the handlebars is quite narrow, it feels like a 250 or a 600, it’s quite short. It’s really, really high, I can hardly touch the floor.

MM: The seat height is high and the pegs are high too, so it can feel a little cramped..

JM: Feels pretty cramped, a bit like a 600. It feels nimble and everything they say it’ll do on the box, it does. Today, you couldn’t keep me off the bikes – I was chomping at the bit, “I’ll have a do on this, we’ll change that, the anti-wheelie and so on, every change reacted to the bike. These road tyres they come on are super, super sticky. I had a bit of go today!

MM: You came in at one point and suggested adding some anti-wheelie to reduce how excited the front felt when trying to get the power down coming out of a corner…

JM: It was a bit windy today and maybe those wings weren’t helping it in the wind and it got quite interesting at times. When there was none of that anti-wheelie on, it was straight on the back wheel. First initial touch of the throttle felt a lot more aggressive than the BMW, which when it’s on the side of the tyre seems to have some kind of gyro where it brings the power in a little bit more progressively as it lifts up onto the fat part of the tyre before you drive, it feels a little bit more controlled on full lean where the Aprilia’s a touch more aggressive when the first touch of the throttle it tends to go out of your hands a little bit. But it didn’t when we changed the anti-wheelie. You can make it an animal.

MM: That’s half the point, you can change so much on either of those bikes…

JM: The ABS works good. Lap after lap on them and putting them through their paces and they were still there for us. The engine braking system works really, really well. They’re both very stable on the brakes, perhaps the Aprilia backs in a little more but that might be the two cylinders affecting the centre of gravity to the BM.

Overall, they’re both very different bikes but the end product is very, very similar. One just feels comfortabler for me than the other one. I could probably match the lap times on both bikes. If I was doing an 8-hour endurance race then maybe it’d be on the BM.

You’ve got forks, a frame, a swing-arm, a sub-frame and a tank position… not a lot’s changed but they’ve just given them a heap of power, a load of electronics and a computer to handle it all so the bikes are way better than probably any of us lot. Interesting day for me, ticked a few boxes and I really enjoyed it. I’ll go away and get my thinking cap on. I might actually do some homework like you guys and actually look at the specs and see what they actually do but from a rider’s point of view, you couldn’t get me off it all day so it’s definitely getting my mojo back for a few things. 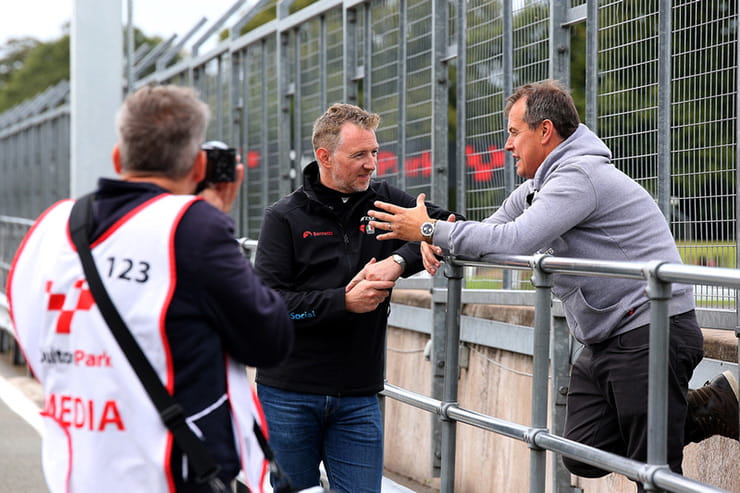 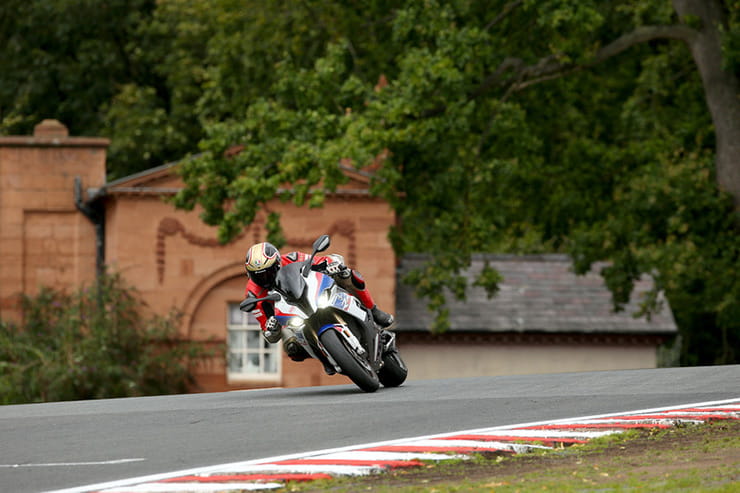 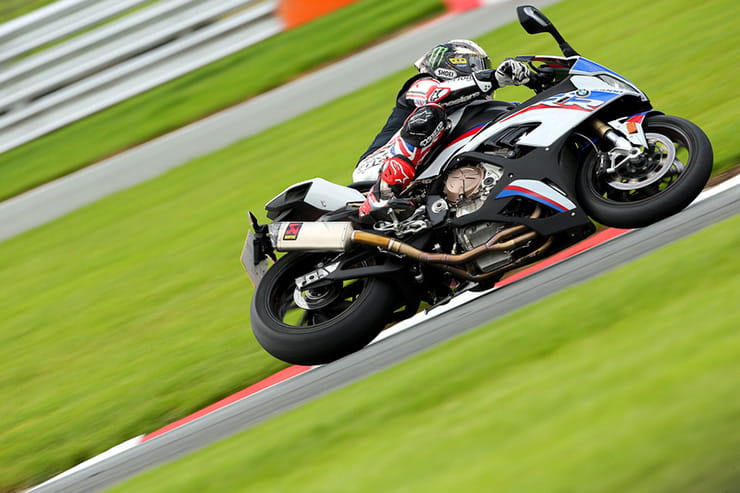 Overall, our opinions matched. From a pure riding experience, we struggled to properly justify why you’d choose one over the other, lap times may be similar but the differences in character, particularly engine and physical size of each bike could be the deciding factor. It’s the road-going focus plus on-track stability that would persuade John or I to choose a BMW dealership with its network reputation as well as the S1000RR’s home comforts with heated grips, cruise control, it’s roomier cockpit and first class dash.