Big or little? From a portion of chips to a set of leathers, it’s an age old question when it comes to whether to go for the big one, or the little one. And it’s no different in bikes too. But in the real world when buying a Ducati 1299 Panigale or a Ducati 959 Panigale – given the keys, or a biro to sign-up for one of Ducati’s TriOptions packages – which one would you buy? We took them round Donington Park on Ducati’s track day to find out.

Bikes may have been ever more restricted with emissions for things like Euro 4, but that doesn’t mean they haven’t got ever more powerful and bigger capacity in the last twenty years.

And we haven’t even got to the big boy 1285cc (CORRECT) 1299 Panigale. With Ducati’s 1299 Panigale being their top-flights sports bike (plus the S and 1199 R versions) we put them together at Donington Park to find out just how different they are to ride.

If the 1299 Panigale is a full-on training session in the gym where you feel like you’ve done six rounds in the boxing ring and need a lie down afterwards, the more sedate 959 Panigale is a gentle spa day with a bit of light cardio thrown in at the end in comparison. But it’s no entry-level motorcycle – it’s a hardcore Ducati superbike in the finest tradition. 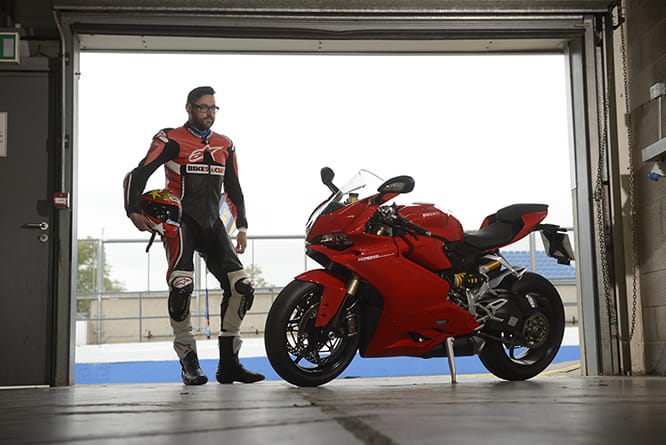 They may look similar bar a few details, they may come from the same town in Northern Italy and be hand-built in the finest Italian tradition of superbikes, but they are very, very different to ride. And very different prices too. The £16,695 1299 Panigale costs some £3600 more than the 959 Panigale at £13,095. Though on PCP through Ducati’s TriOptions scheme they’re £10 a month different according to Ducati’s example.

It’s no slouch, but there are only about two other bikes on this planet that accelerate as fast as the 1299, and one of them has a supercharger. And after 100mph the 1299 gets into its stride and romps away. To 160mph the 1299 gets their 7.6 seconds faster!

But where the 1299 Panigale tries to shred its tyre coming out of Donington’s Foggy Esses and leaves big black lines accelerating out of Coppice on to the back straight despite the best efforts of its excellent traction-control and anti-wheelie system, the 959 Panigale is a whole lot more manageable. Where the 1299 puts the traction-control through the ultimate levels of stress, the 959 and its slightly simpler traction control system gives it a much easier ride. There’s less power, less torque and it means the bike can be pinned to the stop on the way out of the corners where your brain tells you to roll it a bit on the 1299, even with all the electronics working perfectly. Both bikes were ridden in Race mode only. 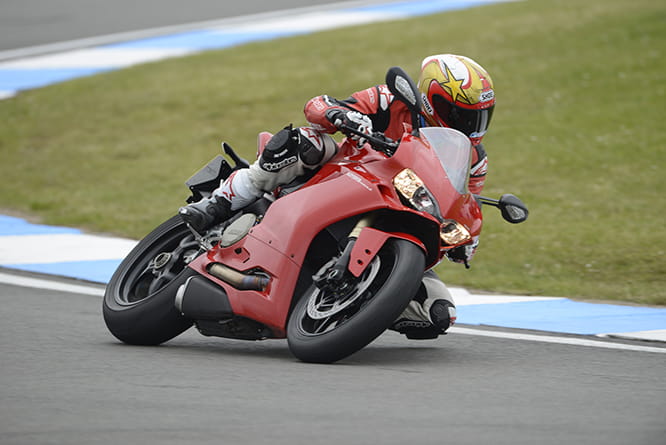 Okay, so the 959 may feel down on power compared to the big one, but it never feels slow. On Ducati’s superbly run track day at Donington Park it was pulling around 141mph indicated at the Dunlop Bridge straight. The 1299 was pulling around 153mph and struggling to keep its front wheel down even with wheelie control dialled up to level 2. But the 959 can get the drive on earlier, and run more corner speed on to the back straight. It’s horse for courses.

On the brakes, the cheaper Brembo M4.32 calipers of the 959 are okay, but not ultimately as powerful as the upgraded Brembo Evo M50 calipers on the 1299. They’re more powerful, have more bite, more feel and pin that Sachs front-end to the road better on hard braking.

But in a corner it’s the 959 that wins the fight.  Both have adjustable engine brake control, but only the 1299 has cornering ABS.

The narrower 180-section rear tyre compared to the 1299’s 200-section rear and the steeper profile of the 959’s 60-profile rear tyre means it turns in better and is more lively in the chicanes, despite running less sticky Pirelli  Diablo Rosso Corsa tyres, compared to the 1299’s Diablo Rosso Corsa SP tyres. Both bike use the same geometry too. Though the 1299 has a 1437mm wheelbase that’s 6mm longer than the 959 Panigale’s at 1431mm.

Ultimately the side-grip levels aren’t the same, but the feedback from the smaller bike’s Showa forks gives you a better feeling than the Sachs forks on the 1299.

One of the biggest cost savers evident on the 959 is the lack of an autoblipper for the downshifts using the quickshift-enabled gearbox. After all, if Ducati made the 959 supertrick then nobody would buy the 1299. 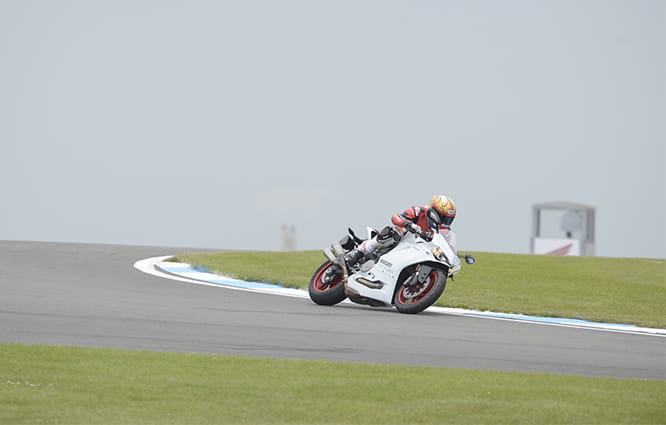 So which one would I buy? Well, funnily enough I was asked this question a lot when talking to potential Ducati owners at a recent two recent Ducati Panigale Trackstar days at Snetterton and Silverstone. Remember, we’re not talking about commuter bikes here. Both are hard superbikes of the finest breed, they’re thirsty, eat tyres, and shred licences. If you want a fantastic road going sports bike that does everything then the 959 Panigale is one of the finest sports bikes ever made. You will never be disappointed in it. But, if you want the ultimate thrill and can stretch to the 1299 that motor, that power and that torque is something everyone should experience just once in their lives. That extra 330cc makes all the difference. Yes, that extra £3600 is a lot of money in pure cash terms, but sports bikes like this won’t be around forever. Ride them while we still can. 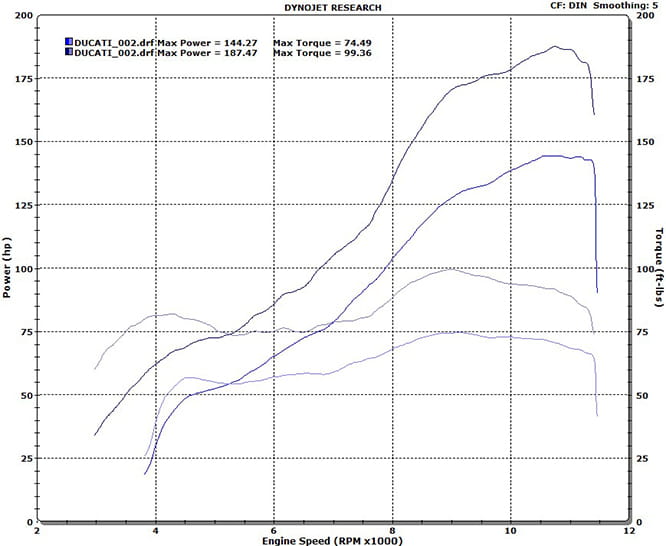 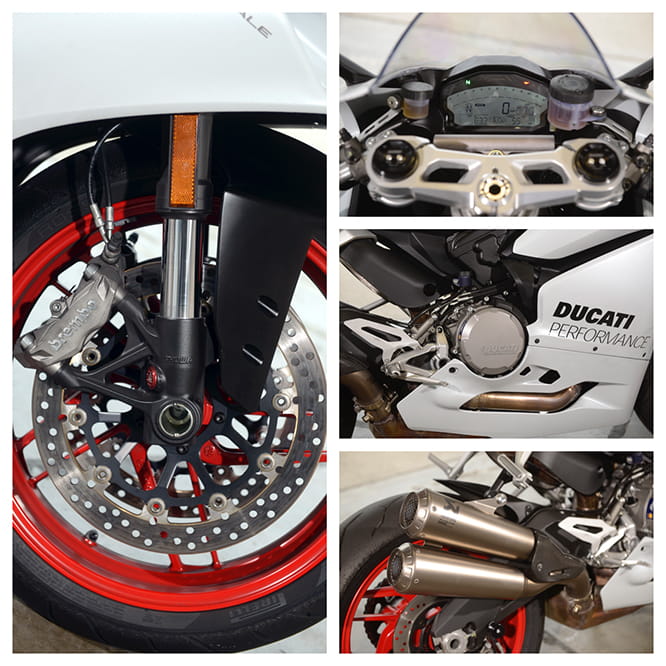 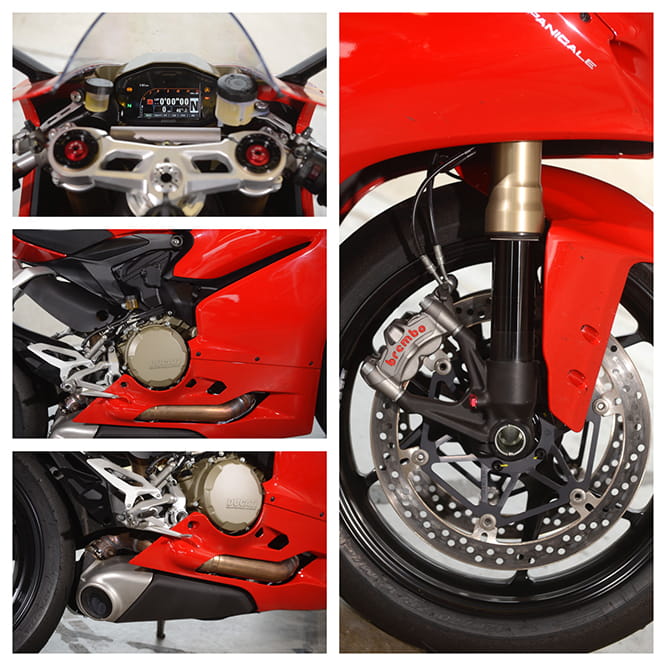 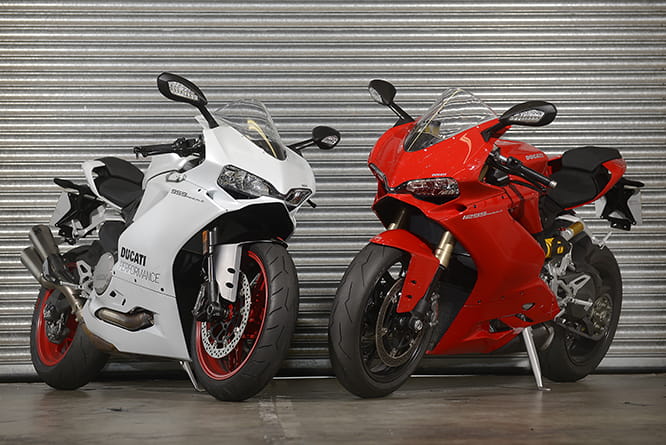