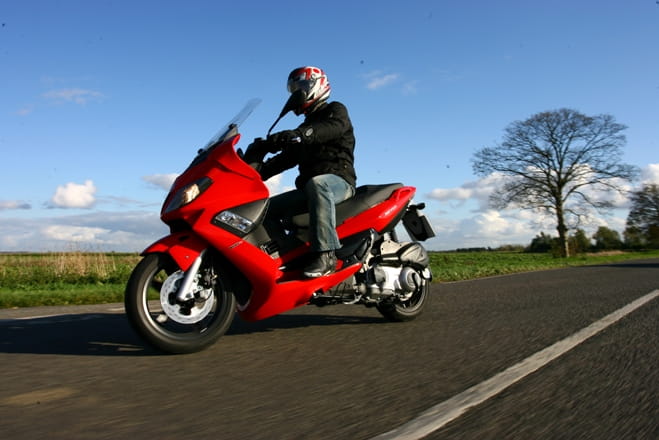 It's only relatively recently that 300's appeared in manufacturers' ranges. If you believe the PR hype they offer the best of both worlds; small, light and economical enough for urban commuting, with a bit of poke for performance on the open road, but what you're actually getting is a 250. Confused?

Well, thanks to the ever popular emissions and noise regulations, 250s don't feel or perform like 250s any more. Manufacturers have had to add a few more cubes to even things out.

So, essentially the Nexus 300 is exactly the same as the 250 it replaced. It uses the same liquid-cooled, four-valve, single cylinder Piaggio QUASAR motor, with an increase in bore and stroke – 75x63 compared to 72x60 on the 250 – to give the capacity hike. 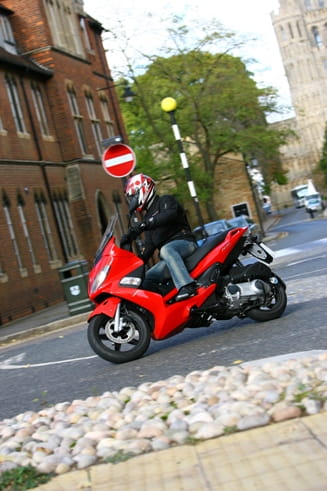 Gilera say the result is an increase in torque from 20.2Nm to 23Nm – the delivery of which comes 500rpm lower than it did on the 250 – while maximum power stays the same at 22.4bhp, although again delivered lower down the rev range: 7250rpm instead of 8050rpm. On paper it doesn't seem like a great deal, but Gilera said the result in the real world was: “...smoother power, more decisive acceleration and a fuller response to the throttle.”

In part, I'd have to agree with them. The QUASAR unit performs remarkably well, especially away from the lights. As you'd expect it is strongest in the low to mid ranges and things do tail off a little once past the national speed limit, but it'll sit happily at motorway speeds and as long as you plan properly, will do the odd A road overtake. Stick to the Nexus' chosen niche – city and town work, punctuated by the odd trip out at the weekend – and it performs more than admirably. It doesn't feel vastly different to the 250, but that's more testament to its performance rather than detrimental to the 300.

It does have a fair bit of weight to carry around too. As with the 250, the 300 uses the same hefty tubular steel chassis as the 500cc version. Keeping it upright are 35mm telescopic forks up front and a bog standard twin shock at the rear – only three way pre-load adjustable instead of the 250's four way set up. Bolted to this is a 15inch front wheel for improved stability and response.

Steering is sharp and responsive at low speeds and the low centre of gravity keeps everything nice and balanced. On the open road it's more of the same, even with the bigger motor swinging up and down beneath you, it stays stable and confidence inspiring, even on fast sweepers. The bars do jiggle about a bit on bumpy terrain, but it tracks well over rough surfaces and feels more motorcycle-like in the way it behaves.

Stability under braking is also top notch. The Nexus has a 260mm single front disc and 240mmm single rear, both with twin piston floating callipers. It's an adequate set-up for the 174kg dry weight with strong progressive stopping power from both front and rear. Feel from the non-adjustable levers is adequate, although I'd personally prefer a little more movement.

Speaking of movement, the screen is adjustable to three positions. Although the top setting was ample for me, taller riders might need to shop around for an aftermarket item.

Nevertheless, the sporty bodywork keeps the rest of the wind/weather off a treat. It's slightly susceptible to cross winds and buffeting from high sided vehicles but nothing to get too worried about. 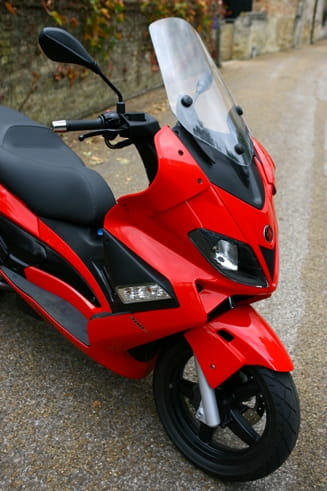 Shorter riders may struggle a bit with the Nexus. Seat height is 815mm, not too lofty really, but it's fairly wide and it can be tricky to get a foot firmly down. It's not particularly comfortable on longer trips either, the seat's hard as nails and the bars quite low set... it is supposed to be sporty I suppose. Pillions get a slightly better deal with a broad seat pad, chunky grab rails and proper flick out footpegs.

Elsewhere you're pretty much getting the same as on the 250. The large underseat storage bay – complete with light and charging socket – which will swallow a full face lid, lock and cover. Plus, two additional compartments below the dash for wallet/change etc.

The dash is well set out and impressively comprehensive, with analogue tacho and speedo – although this does feature kph more prominently than mph – and digital fuel gauge, miles to fill-up, trip, average fuel consumption (I averaged 28.7 litres per km over a mixture of city and motorway miles), temperature and battery indicator too. The modes can be scrolled though easily, with a trigger button on the right switch housing and there's the usual array of warning lights too, some in the dash and some on top of the handlebar bridge.

Top marks too for the air vents in front of the seat, which waft lovely warm air across the rider's legs, a nice touch... and they do actually work.

The Nexus isn't a bad blend of performance, style and practicality really. If you're prepared to put in some elbow grease at the weekends keeping it looking good – the finish will fade quickly if you don't – it's a fairly sensible commuting option.

Is it worth rushing out and trading in your 250 for? Well, there's not much in it to be honest. A shade more performance and a bigger front wheel is all you're going to get. 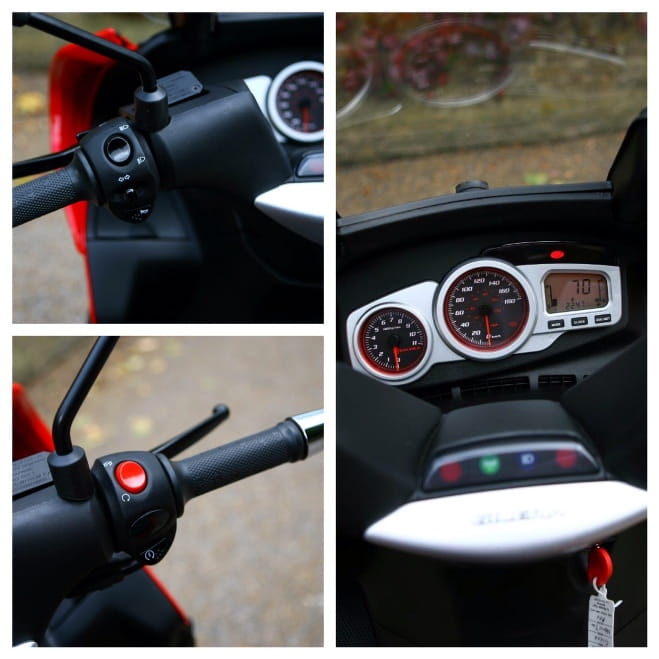