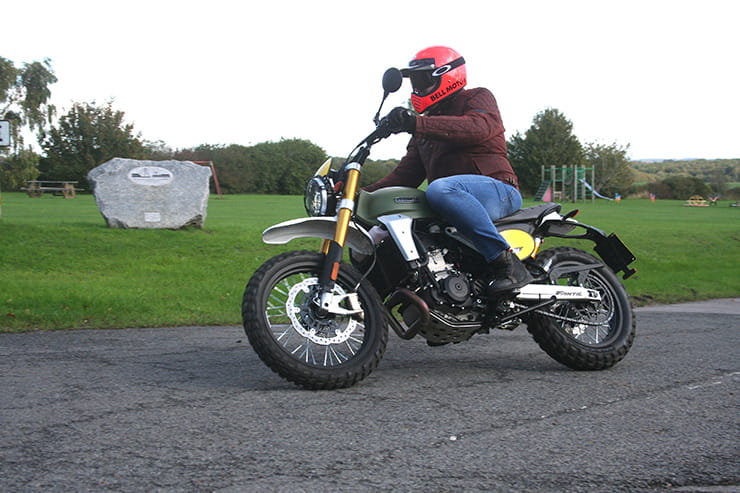 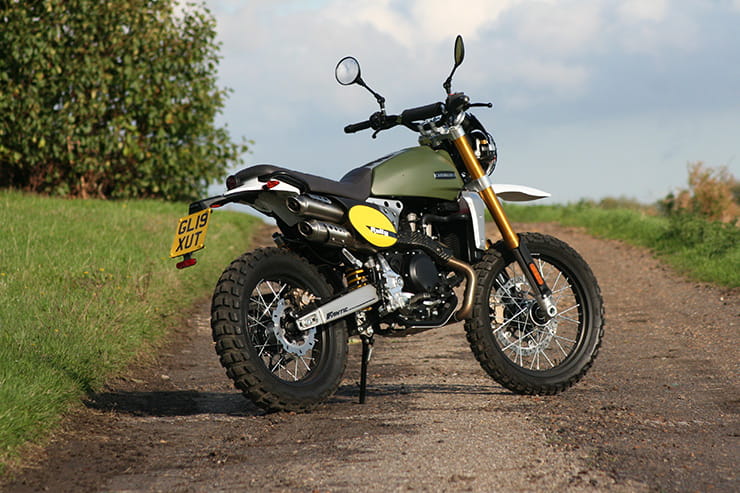 If you're over 50, then Fantic has form (and if you're not, ask your dad). This small Italian manufacturer was a leading player in the funky moped era of the 1970s, offering such exotic 50cc features as a six-speed gearbox plus a rumoured top speed of 70mph (which was never true). And who can forget the Easy Rider inspired Chopper, complete with psychedelic tank transfer? All 50cc's of it.

But Fantic also had a serious side, with a strong line in enduro and trials, winning the Scottish Six Days seven times as well as countless other titles. Legendary among that line up was the Caballero, an effective on/off-road bike offered as a fifty, 100 or 125.

Now fast forward fifty-odd years. Fantic is still with us, though with a thriving sideline in electric-assist mountain bikes, and last year relaunched the Caballero as a road-biased retro bike to appeal to those who remember the original, but now want something easier to live with.

The new-generation Caballero comes in 125, 250 and 500cc sizes, all three sharing much the

same spec, even down to ABS on the 125, and the choice of Scrambler or Flat Tracker styling. According to UK importer Clements Moto, the off-roadish Scrambler outsells the Flat Tracker by four to one. Hence the latest addition to the Caballero family, the Rally, which adds all sorts of off-road goodies to the basic bike.

For an extra £700 over the Scrambler, buyers get longer travel forks and rear shock, alloy swinging arm, semi-knobbly Pirellis, a bashplate, headlight guard, serrated pegs (the rubber covers pop off), a high front mudguard and a few other bits and pieces. Most of these bits, upspec suspension apart, are available as bolt on accessories on the Scrambler.

Put together, they give the Rally a whole lot of off-road attitude (even if it never ventures off-tarmac), backed up by 1970s retro styling and the same 500cc four-valve single as the Scrambler. 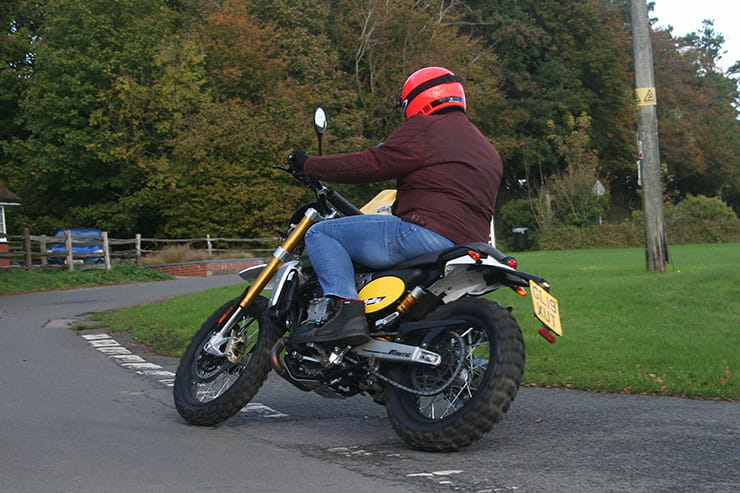 The Rally comes in at £6999, not a bad premium over the Scrambler considering the long list of extra kit which comes with it. The tricky thing is working out who its competitors are, because this is neither an enduro, nor an adventure tourer. Closest is probably the KTM Adventure 390, at £5499, though the more off-road biased R version will cost more.

Acceleration is all about weight, torque and gear ratios, and the Cabellero gets off to a good start, literally. Torque of 31.6lb ft doesn't sound like a massive amount, especially when it peaks quite high up the single's range at 6000rpm. But that's not the whole story, because not only is there a good spread from lower revs, but the bike has six fairly close ratios to take advantage of it. Better still, the thing weighs only 150kg dry, or about the same as a 250cc scooter, so there's not a lot of excess flab to haul around.

The result is instant response and fiery acceleration, the Caballero braarping up through the gears at an impressive rate, with the occasional pop from the pipe on the overrun just adding to the experience. Like a good supermoto single, the Fantic is happiest when accelerating hard. But as a short-stroke single, it does want to be in the right gear, doesn't like pulling from less than 3000rpm in the higher ratios and sixth is only really useable over 40mph. With that proviso, any revs, any gear, it just goes.

There's also enough urge to hold an indicated 70-80mph on the motorway, though whatever's in the mirrors will be blurring into a haze – the real question is how long the rider, sitting bolt upright with arms astretch grasping the wide bars, can withstand the wind blast. But still, it's unlikely that many owners will be a Caballero for motorway cruising – show it a twisty B-road, and it's happy. 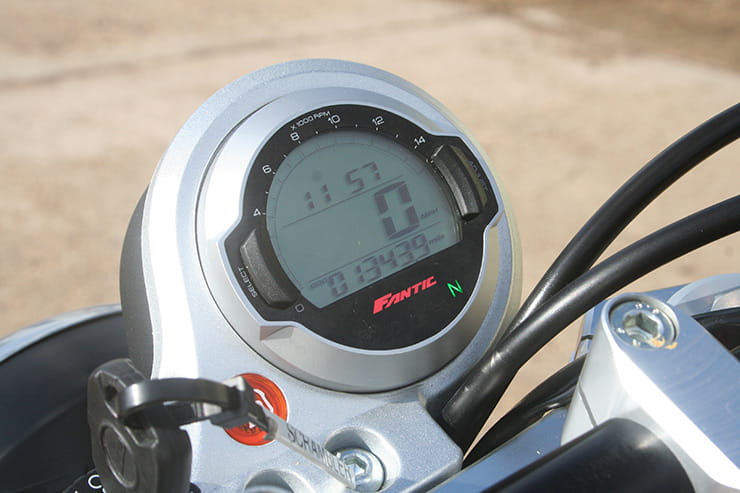 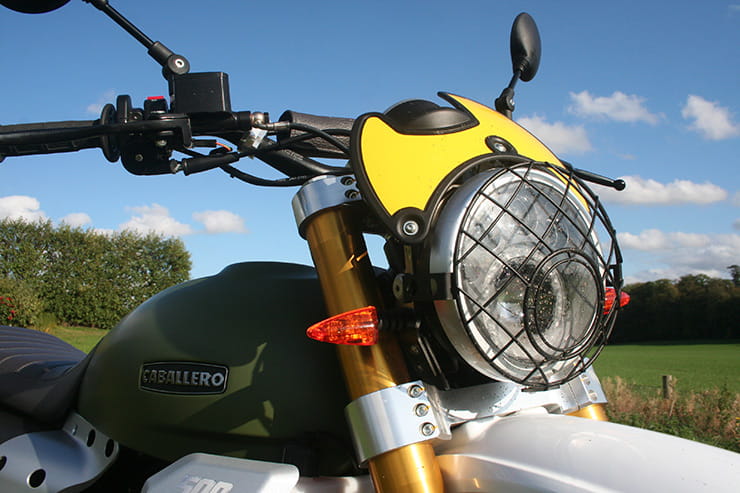 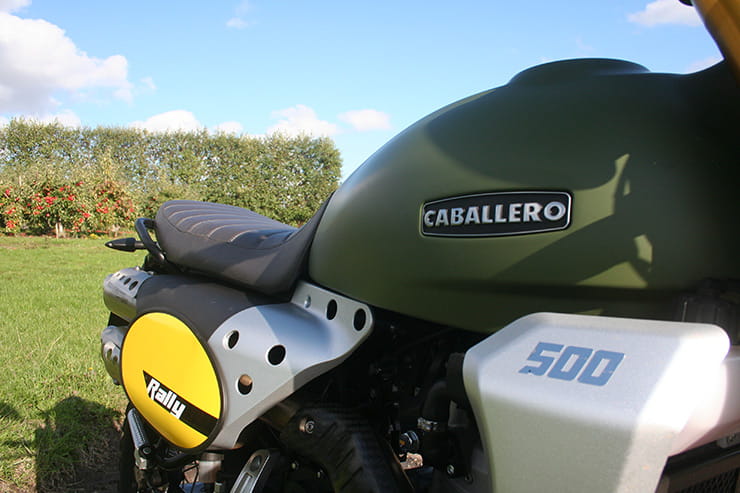 The badges may say 500, but the biggest Caballero is actually a 450, or 449cc if you want to be pedantic. Its short-stroke (95.4 x 64mm) liquid-cooled single – designed in Britain by Ricardo  – is a thoroughly modern motor with Athena fuel injection, catalysts and it won't have any trouble meeting Euro 5, the next round of emissions legislation. It's matched to that six-speed box, which clicks through the ratios very efficiently, though I occasionally had trouble finding neutral on the test bike. Arrow makes the exhaust system, and a very satisfying blat it gives too – an alternative pipe offering a claimed 8% extra power costs £270 more.

Now it's a fair bet that not many Caballero owners will be buying the bike with fuel economy in mind, though it would make a fun commuter, which puts these things into perspective. The test bike managed 55mpg on a mix of B-roads, country lanes and a little bit of dual-carriageway – not brilliant for a 450 single, but this bike is about fun rather than frugality. The 12-litre tank means you'll be looking for fuel after 120 miles or so.

The Rally's big-ticket item is Olle forks and rear shock from Spain, with 200mm of travel at each end. Both are multi-adjustable for damping (plus pre-load on the rear) and are a step up from the standard Scrambler items. Allied to a simple tubular slim steel frame and the Caballero's low weight, they deliver fine handling, while the wide Tomasselli bars make it easy to tip the bike into a corner. The Pirellis feel more squirrelly on tarmac than the more road-biased Michelin Anakees (fitted to the Scrambler) but the bike was still in its element on some of Kent's twisty back lanes. These came into the 'how many hazards can you spot' category – scattered gravel, wet leaves, tractor leavings and the odd pothole, but the Rally took this all in without a problem.

Longer travel forks and shock also make it happy off-tarmac. The Fantic is not a lightweight enduro, but on a rough and undemanding track it felt well within its limits (and mine, come to that) so all the off-road bits and pieces aren't just cosmetic – the Rally really can go green laning if you want. It's small (high seat apart) and narrow enough for you to feel in control, probably a more realistic off-road tool for most of us compared to a big adventure bike.

Underlining the off-road theme, the ABS can be switched, not that you'd want to do that on tarmac. Either, they're a good setup, with Braking discs (320mm front, 230mm rear), easily powerful enough for this lightweight bike and nicely controllable at both ends. I can confirm that the ABS works. 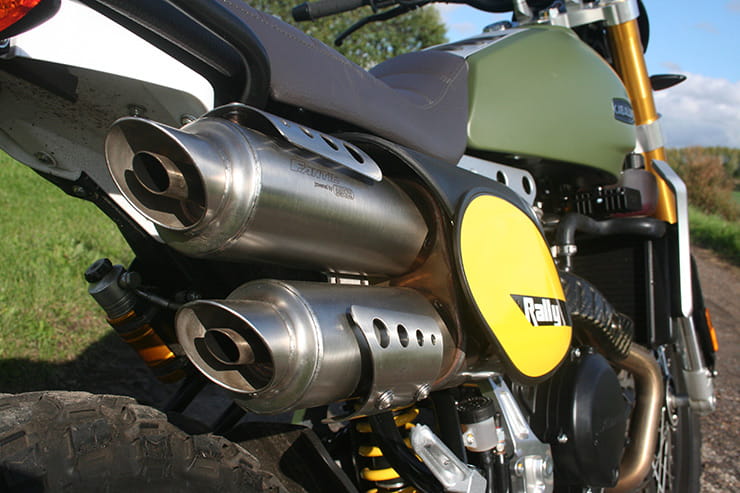 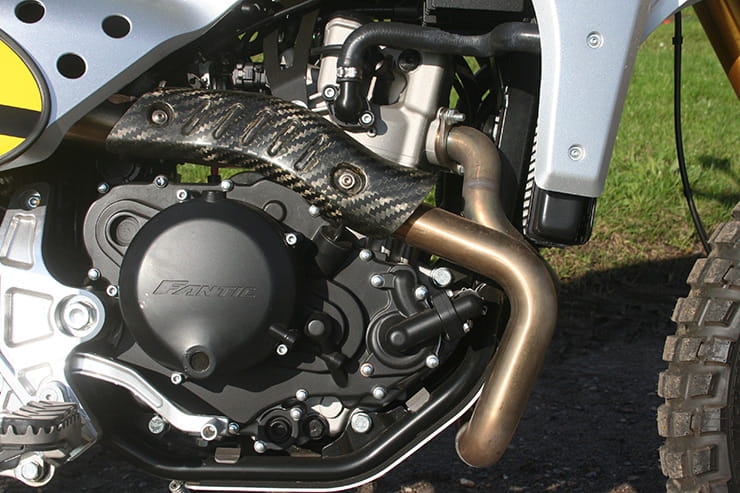 Even if you never take your Caballero touring, it needs to be up to a long day's ride, at the very least. Keep off motorways, when the wind blast would get knackering after a while, and the bike is actually quite comfy. The upright position is natural and you get a good seat and compliant long-travel suspension. If there is a downside, it's that very thing – the longer forks and shock mean an 860mm high seat and my 30in legs were on absolute tiptoe, so it's a good thing the bike's quite narrow. Importer Clements Moto does offer a lowering kit on the Scrambler and Flat Track Caballeros, which uses a Hagon shock to cut the height by a useful 40mm, but it's not available on the Rally.

This is a no-frills bike, which is part of its appeal, so there are no riding modes, and the instrumentation is minimalist, just a digital speedo with tiny wee fuel and battery gauges. The block-style rev counter is pretty useless – too small to read at a glance and lagging behind the revs in any case. Warning lights are similarly diminutive. While we're complaining, the switchgear is a bit eccentric, with a finicky indicator switch, tiny horn button plus a knurled wheel as the dipswitch – why not just fit the standard stuff we're all familiar with? But there are luggage options – a small tankbag, and a single soft sidebag – not quite enough for overlanding, but useful.

£7000 will buy you a smoother, more sophisticated adventure tourer than the Caballero – it'll be more tractable, better on the motorway and maybe even use less fuel. But it probably won't be as much fun – there's an inner hooligan to the Fantic and the bike has a '70s retro appeal unlike anything else in this class.

Three things I loved about the 2020 Fantic Caballero 500 Rally …